Embrace Your Inner Geek here with the Third installment of my Harlequins Review. This time the generic Stratagems and Enigmas. Check he Tactics Corner for more great articles!

Read part 1 of the review, here.

Read part 2 of the review, here.

Webway Assault. Again, the “usual” one we’ve seen in other books. One CP to put one unit in the webway, 3 to put 2 there. It’s only good if you have units that benefit from it, and I’m not sure Harlequins do. Maybe a big unit of Skyweavers? Also, with the “new” restrictions on deep striking on turn one, I don’t think it’s a great option. However, where I can see it being useful is to “insert” Shadowseers and Troupe Masters exactly where they need to be to “buff” other units.

Prismatic Blur. One CP to get a 3++ on a unit that has advanced. This has very obvious utility and might become the most used stratagem. I expect to use it on a unit I really need to survive, combining with Lightening Fast Reflexes for -1 to hit, making the unit even more resilient. For example, if you’re using Twilight Pathways to boost a Starweaver filled with Fusion Pistols on a long range Fusion Drive By, you could give the ‘weaver a 3++, and make it -2 to hit, and it might just make it home alive (maybe!) 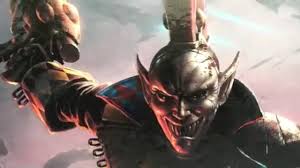 Hero’s Path. An interesting one. For 2CP’s, if a Death Jester, a Shadowseer and a Solitaire are within 6” of each other at the start of a movement phase (sounds like the start of a bad joke “A Death Jester, a Shadowseer and a Solitaire walk into a bar…”) you can remove them from the table, and then place them back at the end of the movement phase anywhere more than 9” away from enemy models. The obvious use is in your turn 1. Deploy the 3 somewhere out of LOS, and then use the Strat to place each of them wherever you want – the Shadowseer to cast Twilight Pathways, the Solitaire to blitz into a tasty target and the Death Jester ……. well, I’m sure he will find something to do. Interestingly it’s not “your” movement phase, but “a” movement phase, so you can use it in your opponent’s movement phase. So you could set them up as “bait” inviting you opponent to counter deploy, and then use the Strat in their movement phase, leaving them out of position. But, I can’t help feeling I’m missing something here….!

Cegorach’s Jest. For 1CP, you can shoot a unit that falls back from one of your units immediately it finishes falling back. So, run up to a vehicle, shoot it with your Fusions Pistols, charge it, the vehicle falls back, and, as long as it’s still in range, you can shoot it again in your opponents turn. It also works on Skyweavers ….. with Haywire Cannons!!

The Hundred Sword of Vaul. For 1 CP, you can redeploy a unit before the battle begins. You can only redeploy one unit (although Players in a Weaver count as 1 unit) and you can only redeploy into your own deployment zone. This is the Strat to use to line up the perfect Blitz, or the perfect long range Fusion Drive By. I find opponents typically deploy to avoid a charge from the Solitaire, or a Starweaver full of Fusion Pistols. With this Strat, you can hide your Solitaire or ‘weaver anywhere you like, preferably out of los, and then move it the perfect launch spot.

Torments of the Fiery Pit. For 1 CP, in the fight phase, a Character that’s lost a wound earlier that battle round, gets +2 strength and +2 attacks. Makes you want to lose a wound on your Solitaire in overwatch!

Vessel of Fate. For 1 CP a Shadowseer can cast an extra power. Need Smite and Shards of Light for 2d3 mortal wounds, and still boost a Starweaver across the board for a long range Fusion Drive By, well now you can

War Dancers. The Standard “fights again for 3CPs” stratagem, but given how powerful Harlies are in assault, it might even be worth it! Imagine a blitzing Solitaire, attacking 20 times…..! . 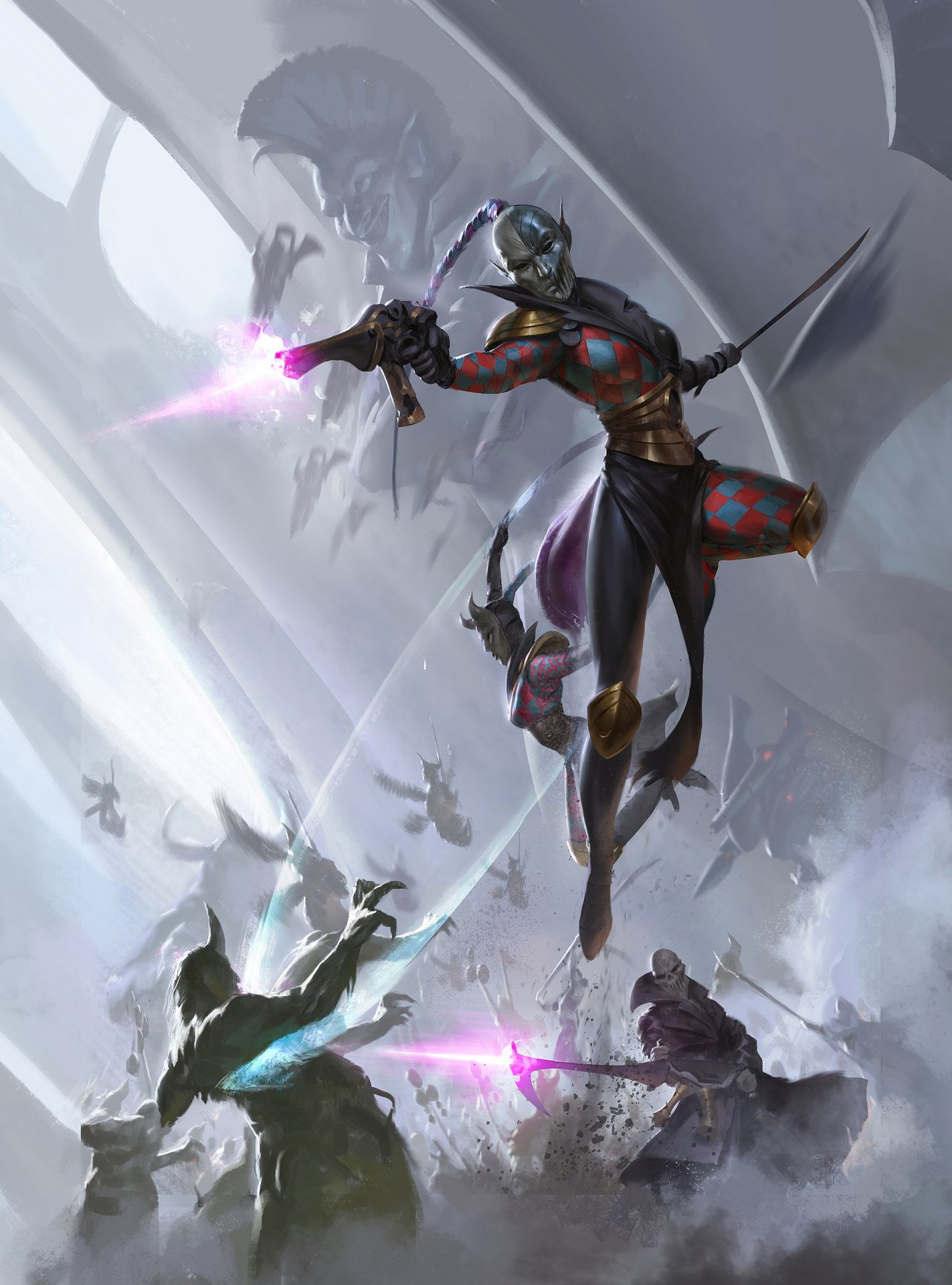 Fire and Fade. The same as in the Drukhari and Craftworlds book. This is another way to increase the range of your Fusion Drive By. Move the Starweaver 22”, fire the Shuriken Cannons at a target, Fire and Fade the ‘weaver 7”, and then shoot the Fusion pistols inside, for a 35” effective range.

Dramatic Entrance. For 1 CP, a character can heroically intervene 6”.

Warrior Acrobats. For 1CP Infantry models get an automatic 6” advance. This Strat just might make a footslogging unit of Players viable. It makes their basic move 14”, after which they can still charge. Combine that with Twilight Pathways, and that’s a 35” charge on average dice.

Shrieking Doom. This is the Death Jester Strat mentioned above, for 1CP, the Shrieker Profile of the DJ’s weapon (including Curtainfall, the Enigma Weapons) gets +1 strength, and does d3D. Note, it only works on the Shrieker Profile, not the Shuriken one. Some folks are getting this wrong.

Isha’s Weeping. If a unit loses a wound in a phase, at the end of that phase 1 CP, increases their invulnerable save by one to a max of 3++. Use this when your Troupe loses a Player to Overwatch. Combined with Prismatic Blur, you can have 2 Troupes in combat with a 3++. Or combine it with Torments of the Fiery Pit for a S5 Troupe Master with 7 attacks and a 3++.

Mirthless Hatred. One CP. Reroll hits and wounds against Slaanesh units in the fight phase. Situational, and you’ll probably forget!.

Lightening Fast Reactions. Two CP’s for -1 to hit for any unit against both melee and shooting attacks. Along with Prismatic Blurr, I suspect this is likely to be the most used Stratagem. With these 2 Strats, plus Veil of Tears, any unit in a Harlequins army can be -2 to hit, and have a 3++. With Fog of Dreams, any infantry unit can be -3 to hit against attacks from one enemy unit.

Haywire Grendade. For 1 CP, throw a Plasma Grenade at a vehicle and, if you hit, do d3 mortal wounds.

The Mask of Secrets. Plus 1 to the bearers leadership, -1 to any enemy models within 6”. Yet another way to effect leadership if you’re going for a leadership bomb approach.

The Storied Sword. A power sword replacement for Troupe Masters, +1S -3AP and d3D, re-rolls misses to hit. OK, but there are better.

The Suit of Hidden Knives. For every roll of 1 to hit against you in the fight phase roll a dice. On a 2+, the unit attacking you suffers a mortal wound. Interesting, but gets more interesting if you cast Veil of Tears on the bearer, Fog of Dreams on the unit they’re about the charge, and use Lightening Fast Reflexes. So a cumulative -3 to hit, and your rolling a dice on 4’s to hit and below. I have this image of of a Shadowseer jumping out her Starweaver, popping Reflexes, casting Veil on herself, Fog on a unit she’s about to charge, and shouting “come at me bro..!”

The Starmist Raiment. You get a 3++ against shooting and can’t be overwatched if you advance. Great on a Troupe Master for the 3++, but you might be tempted to run this on a Solitaire (“I declare a charge against everything within 12”), if it wasn’t for …..

Cegorach’s Rose. To my mind if you run a Solitaire, this is the “must take” Enigma. It’s an upgraded Kiss that always re-rolls wounds, and does a straight 3 damage on infantry models. This, right here, makes the Solitaire the ultimate character assassin he always should have been. Now a blitzing Solitaire will kill a 5 wound Space Marine character with a 3+, 4++ without breaking sweat. In fact, if you can get in range of 2,  he’s go reasonable odds of taking out both of them, splitting his attacks 5 and 5. And if he doesn’t do it first time round, pop War Dancers to give him a second go. Terrifying. My only regret is that it’s only 3 damage on infantry, so he still doesn’t make a Dawneagle Shield Captain sweat …. unless he fights twice!

The Laughing Gods Eye. Auto pass morale tests when within 6”, and have a 6++ against mortal wounds in the psychic phase. You will never see this.