Blades of Khorne Review : Lord of Khorne on Juggernaut

You are here: Home › Age of Sigmar › Review › Tactics › Blades of Khorne Review : Lord of Khorne on Juggernaut

Hey everyone, Josh here to discuss the units that are available in the Blades of Khorne. This time we’ll be discussing one of a competitive general, Lord of Khorne on Juggernaut. For more tactics articles, check out the Tactics Corner!

Lords of Khorne have faced the trials of Khorne. They have victoriously stood atop piles of skulls and chanted the name of their God in a blood fueled rage. It is then that Khorne descends, blessing them with the daemonic power they desire. Khorne may provide his mighty lord with a daemonic steed or brass steed. 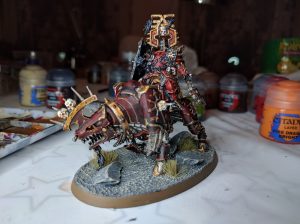 The Lord of Khorne on Juggernaut can take on a wide variety of rolls. This unit is fast, is resilient, deals reasonable damage for its price, has mortal wound potential and most importantly can act as a force multiplier. This is the only unit in the Blades of Khorne that can provide a positive die-roll modification to a wound roll.

The Lord of Khorne on Juggernaut is an excellent looking, threatening model. I frequently take this model to events. In almost every game I play, my opponent immediately falls in love with the model and wants to pick it up for a close up view. Being a web exclusive, most juggerlords are kit bashed. It’s very rare that you come across another player who owns the official sculpt. This one of the few sculpts done by hand that can still hold a candle to the GW sculpts that are done digitally today, and I think many players appreciate the craftsmanship. This model and Be’lakor are probably my favorite GW sculpts. The sculpts help tell a story about an arrogant and brutal warrior or a power daemon prince who prowls in the shadows. What are your favorite sculpts?

Any model with 8 or more wounds has a huge advantage in the survivability department. Why?

The bottomline, 8 wounds is just above a threshold and having 8 wounds is much better than having 7. Couple this with a 4+ mortal wound save against spells and a 3+ save characteristic, and your opponent is going to have to make a serious commitment to kill him off. 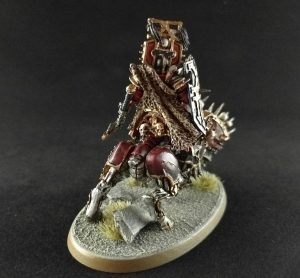 The Rules Lawyer: I’m currently unsure on the rules for the Blood Stampede. We’re currently playing so that you add 1 to the wound roll until the next hero phase as long as a successful charge is made the turn the command ability is used, but it’s worded in such a way that it could be interpreted in multiple ways. I’m currently not happy with the wording. I’d like GW to FAQ this ability. Make sure you ask your TO how they define the ability. As a TO I tend to lean toward giving the unit the better of the two interpretations as long as they aren’t meta breaking. If you’d like to check out a great article on game balancing, take a look here.

Blood Stampede is also unique in that it is the ONLY command ability in the Blades of Khorne that can stack (aside from Wrath of Khorne Bloodthirster’s command ability.. but seriously?). There are two really cool things you can do with this. Both of these involve the new blood tithe, Bloody Exemplar. First off, use Juggerlord’s Daemonic Axe along with the Gorecleaver artefact to turn those 4+ wound rolls into 3 mortal wounds a piece. Second, field Archaon, the Everchosen and use the Slayer of Kings along with 2x Blood Stampede to delete large models from the battlefield if two or more of your wound rolls are 4+.

The Rules Lawyer: Remember, command traits and artefacts are chosen after setup. Make sure you choose artefacts that help you defeat the your opponent. If you need another mortal wound outlet or extra rend, consider taking a Gorecleaver. If you need to sure up those charges or get into combat quickly, consider taking a Talisman of Burning Blood. Nothing in the rules prohibits you from taking more than one of the same artefact.

Juggerlord is surprisingly fast. He can easily slaughter stray battleline units. Capture objectives and keep up with your front line to provide buffs and AoE command traits like Violent Urgency. 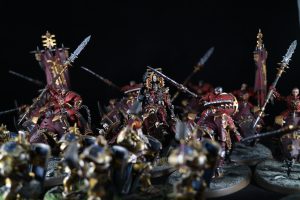 Blood Stampede only affects Mortal Khorne units. The more you delve into Daemon territory, the less effective he becomes. If you’re making a hybrid mortals/daemons list, make sure you weigh the benefits and disadvantages associated with this limitation. 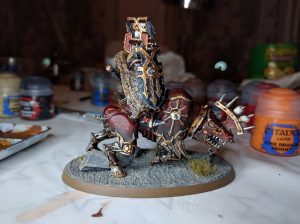 Juggerlord might be heavily armored, but watch out for units that deal mortal wounds during combat. Weigh the risks of engagement. Identify your opponent’s threats, and anticipate that they will attack you with the unit best suited for the job.

← Deathwatch Index Review- First Impressions in 8th Edition
8th Edition: What are you loving and not enjoying so far? →

9 Responses to “Blades of Khorne Review : Lord of Khorne on Juggernaut”