You are here: Home › Age of Sigmar › Review › Tactics › Blades of Khorne Review : Valkia the Bloody

Hey everyone, Josh here to discuss the units that are available in the Blades of Khorne. This time we’ll looking at one of the coolest heroes in the game, Valkia the Bloody. For more tactics articles, check out the Tactics Corner!

Valkia the Bloody was once a brutal warlord queen. She was ruthless and committed acts of violence so great that Khorne himself took notice. After beheading the a Slaanesh Daemon Prince, Locephax, who suggested she’d make a great slave, she vowed to carry the head through the veil and place it at the foot of skull throne in front of Khorne himself. 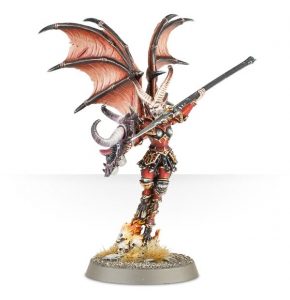 During the journey, the daemons of Slaanesh descended upon her party. Valkia was a powerful warrior, but after slaying untold hundreds of Slaanesh daemons she was defeated. Khorne knew his acolyte had fought with valor and was furious. He descended upon the battlefield. His bellows alone were enough to turn the remaining Slaanesh daemons to a red mist. Blood rained from the sky while Khorne’s daemons collected Valkia’s body parts and carried them to the foot of the skull throne.

Valkia awoke; she had been reborn. Daemonic strength pulsed through her unholy veins as horns were pulled from her skull, daemon wings tore through the chiseled muscles in her back, Locephax’s living head was bound to her shield and her spear was reforged in Khorne’s favor. Khorne had granted her the highest levels daemon hood. In that moment Khorne’s daemon horde kneeled in reverence as she picked up her sword and shield. From this point on, she would be Khorne’s favored daemon queen.

Most of Valkia’s lore was written prior to Age of Sigmar, and She hasn’t played a role in the Bloodbound ranks as of yet. It’s unfortunate that we haven’t seen her in action. Valkia has to be one of the coolest characters in Age of Sigmar. Make sure you check out the Valkia’s lore in the novel Valkia the Bloody by Sarah Cawkwell. 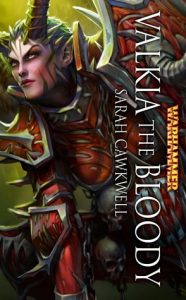 Both Scyla and Valkia are old fantasy and suffer from inconsistencies between the lore and their keywords. She is clearly a hybrid daemon/mortal according to the lore, but is missing the Daemon keyword on her warscroll. It’s unfortunate too, because meeting both requirements would actually make her a better unitin game.

Unlike Scyla, Valkia actually has purpose in the game. Valkia is an assassin style unit. She has a combination of speed, resiliency and reasonable damage. Typically, you’ll use her to attack the front line behind your alpha striking units or engage enemy heroes by flying over your opponent’s front line. Overall I think she’s an excellent model with solid rules but other choices in the Blades of Khorne place her just shy of being considered a serious choice for the competitive scene.

Valkia’s mobility has to be her biggest advantage. She can capture objectives, fly over enemy defenses to kill heros, intercept stray battleline units that are looking to score an objective or get up-close and personal with those pesky ranged targets.

The Rules Lawyer: Remember, pg. 3 of the Age of Sigmar Rules Errata states the restrictions surrounding a pile-in:

“Each model must finish the move closer to the nearest enemy model than they were at the start of the move.”

Valkia’s fly coupled with a small 32mm base means that you can pile-in directly over enemy units with a 40mm or smaller base. In addition, the 2” range on her spear should provide you with just enough reach to leave opponents who haven’t played against her scratching their heads or breaking out the rule books. Make sure you take advantage of unique pile-in scenarios with this model. 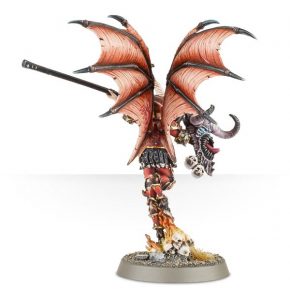 Valkia is reasonably tanky. She has a solid save and a built in de-buff to enemy wound rolls during the combat phase. This makes her especially good for abusing and harassing melee units that wound on a 4+ (most battleline). You can usually count on her surviving two to three turns of combat.

Valkia has got some reasonable defensive characteristics, but she only has 5 wounds and no defense against mortal wounds. Make sure you identify threats with spells, abilities or attacks that deal mortal wounds and weigh the risk involved when you put her within range of those threats.

In a world with Bloodsecrators and Gore Pilgrims, the Gaze of Khorne ability is just an unnecessary tax. I was really hoping that they’d update Valkia’s warscroll to remove this ability and replace it with something else. Too bad.

As cool as Valkia is, you’re going to have to pull all the stops to get your points worth from this unit. In her current current state, I’d price Valkia around 80-100 points. She takes up a leader slot and needs a lot of support to accomplish her goals. A 120 point unit rarely has enough weight in the game to justify spending your force multipliers like Slaugherpriest’s Killing Frenzy or Bloodstoker’s Whipped to Fury on it. If you’re taking Valkia, you’ll need to commit at least three of the five buffs I mentioned above to make sure she deals enough damage:

Valkia w/ Charge against 4+ save 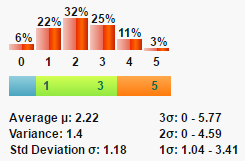 Valkia w/o Charge against 4+ save

The worst thing about Valkia is that she is a pure melee, named leader. I believe GW often forgets the disadvantages associated with taking a named leader or how good a pure melee character has to be in order for it to be worth taking. I think these are two areas of the game that GW needs to work on. At this point, there is only one pure-melee, named character that I would consider taking on the competitive scene: Skarbrand. Pure melee characters must be EXTREMELY powerful for their points ( Example : Stonehorn ) to have a shot at providing value, and if they’re named then they need to have unique abilities as well ( Example : Skarbrand, Total Carnage ) that help them fill a unique role.

PS : After writing this I was pretty bummed. I really wanted Valkia to be great, but after doing a bunch of research and solo-playtesting I was dissapointed by her performance. I don’t think she’s terrible, but I don’t think she’s a legitimate competitive choice. Supporting a 120 point unit feels bad. I truely hope that GW revisits Valkia’s warscroll. She has such great lore and a cool model. I don’t care if they price her around 200+ points or so. Just turn Valkia into the battalion slaughtering, bloodlust inspiring queen of wrath that she is supposed to be.

4 Responses to “Blades of Khorne Review : Valkia the Bloody”