Hey everyone, Josh here to discuss the units that are available in the Blades of Khorne. This time we’ll coming back one final time to our friend the Slaughterpriest to talk about one of the best support battalions in the game, Gore Pilgrims. For more tactics articles, check out the Tactics Corner! 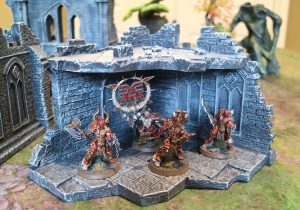 A match made in the realm of Chaos.

Gore Pilgrims is a support battalion that emphasizes the primary force multipliers in Khorne allegiance, Bloodsecrator and Slaughterpriest. The Battalion is centered around providing abilities to the Slaughterpriest that both extend the range of Bloodsecrator’s Rage of Khorne and Loathsome Sorcery and allow them to reroll both failed Prayers and Blood Blessings that they know. While it’s a powerful battalion, it cannot win games on it’s own. Gore Pilgrims is designed to support units outside the battalion and amplify their power to secure victory.

The Rules Lawyer : Some interesting things to note here. The check to determine how many Slaughterpriests are in 8” proximity (line of sight is not relevant) occurs when the Bloodsecrator opens the Portal of Skulls and lasts until the next time he opens it. If your opponent kills one of your Slaughterpriests during any subsequent phases, it won’t have any impact on the range of your Bloodsecrator’s abilities until you re-open the Portal of Skulls.

Additionally, this battalion is just another example of poor rules writing. I don’t know why GW has such trouble writing rules associated with the poor Bloodsecrator. The Gore Pilgrim’s warscroll battalion states the following:

What’s wrong with this? Well, first of all the Portal of Skulls is not an ability with range. Protal of Skulls provides Bloodsecrator with the abilities Rage of Khorne and Loathsome Sorcery.  RAW, widening the rift does NOTHING. Fortunately (unlike the Bloodsecrator itself), it’s obvious that the intention was for Rage of Khorne and Loathsome Sorcery to gain range. GW, if you’re listening. Rewrite or Errata the last line to read something like this:

“Increase the range of the Rage of Khorne and Loathsome Sorcery abilities for this battalion’s Bloodsecrator by 6″ for each of this battalion’s SLAUGHTERPRIESTS that are within 8″ of him when he opens the Portal of Skulls.”

Providing extended range to Bloodsecrator’s abilities is a pretty big deal. This means that units being supported by your Bloodsecrator will be able to traverse the entire battlefield while while continuing to receive buffs from the Rage of Khorne. In the past, tail lines to maintain buffs for the Rage of Khorne reduced the effectiveness of Khorne units, but with the use of the Gore Pilgrims this is rarely the case. 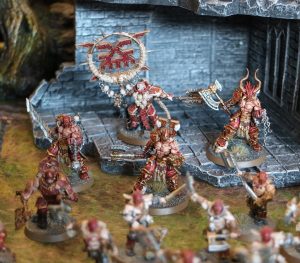 Very rarely do spells function beyond 30”-36”. Loathsome Sorcery is more irritating to your spell casting opponents than ever before. As you see Blades of Khorne enter the competitive play space I think this ability will be a pain point for many spell casting armies. I cannot tell you how useful it’s been for me.

The Rules Lawyer : Make sure you pay attention to abilities that allow your opponent to modify rolls while casting spells. Some of them, like Destiny Dice, only have an impact on a single die roll. Forcing your opponent to reroll both dice means that they’ll have to re-roll the die that was modified with destiny dice.

Re-rolling Prayers and Blood Blessings is a massive bump to Slaughterpriests’ powerful array of zoning abilities and buffs. Increasing the success rate from 50% to 75% changes the Slaughterpriest’s abilities from a gamble to a likelihood. Suddenly, you’re able to count on dealing D6 mortal wounds or pulling units across the battlefield and into the fray of battle. Your opponent is no longer taking a calculated risk when they enter the threat bubble of a Slaughterpriest. Instead, they are accepting an outcome.

Using Killing Frenzy on your Slaught Priests with this battalion is the only consistent way to emulate Lord of War with the Khorne allegiance. I have a strong feeling that you’ll see lots of potent Bloodletter and Skullreaper bombs tagging alongside the Gore Pilgrims. The hyper aggressive nature of these units are a pefect marriage with the defensive nature of this battalion.

Gore Pilgrims is dependant. You cannot win games on the back of this battalion alone. Between the screening units, zoning units and force multipliers the entire battalion is grounded in a defensive nature. You’re going to need to supplement this defensive battalion with faster, aggressive units or battalions (Examples: Gore Tide + Slaughterborn, Murder Host or Brass Stampede). 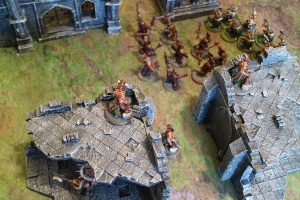 A Bloodsecrator protected behind Cover while three Slaughterpriests provide support for a unit of Skullreapers and harass the Liberators with prayers.

Bloodsecrator is a linchpin. If he goes down early, you’ll be hard pressed to win. Place him out of sight and press your opponent with units they can’t ignore. Force your opponent to make choices and punish them as hard as possible when they make bad ones.