Hey everyone, Josh here to discuss the units that are available in the Blades of Khorne. This time we’ll comming back to our friend the Slaughterpriest to talk about the versitility gained from blessing your fellow man with blood. For more tactics articles, check out the Tactics Corner!

The only units in the game that can use Blood Blessings are the Slaughterpriest and Chaos Warshrine. If you have the Khorne Allegiance, each Priest in your army knows a single Blood Blessing in addition to the Prayers they already know. They function exactly like the Slaughterpriest’s Blood Fuelled Prayers. You roll a D6 and add 1 to the result if the priest slew any enemy models in the previous turn. If you roll a 1, your priest suffers D3 mortal wounds and if you roll a 4 or more the Blood Blessing is a success. 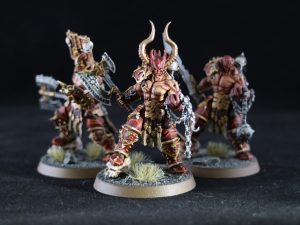 The Rules Lawyer: Unlike Artefacts, Blood Blessings are tied to your unit’s lore before setup. Technically you should let your opponent know which blessing your priest knows prior to setup. This means that you will likely need to choose your Blood Blessings when creating your tournament list in an event.

Khorne is an aggressive army that wants to put its enemies into a reactionary​ position with force multipliers and battleline units. Prior to Blades of Khorne Slaughterpriest didn’t fit into Khorne armies. He had some interesting prayers, but the army didn’t need a zoning style unit that took up a leader slot. 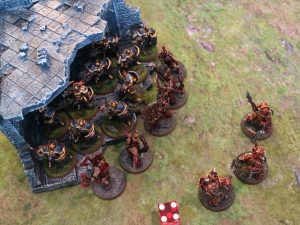 Three Slaughterpriests providing Killing Frenzy x3 to some Skullreapers looking to add to their daily quota.

Since each Blood Blessing is an ability, they aren’t subject to the rule of one. These babies stack.

Blood Blessings cannot be unbound in the same manner as a spell. This is awesome. Imagine a wizard with spells that could not be unbound.

When choosing Blood Blessings the best advice I can give you is to play to the strength of your list. Whether or list is resilient or aggressive, know what your goal is ahead of time and make your choices accordingly. Let’s a look at each Blood Blessing:

Lots of players like to compare these abilities to spells and suggest they should be limited by the rule of one, but there are quite a few limitations on them already. I wish Khorne would let me use the Chaos Sorcerer.

Blood Blessings are a commitment for a variety of reasons. For each choice I make, I’m permanently forfeiting 5 others. Commitments are made before deployment. If these choices do not help us overcome the problems we are faced with, then we must make the best of the situation at hand.

Blood Blessings require a commitment to the Khorne allegiance. Effectively, they’re a boon received for forfeiting power house staples like Sayl the Faithless or Be’Lakor. However, for anyone that has played mixed chaos, this is a huge deal. 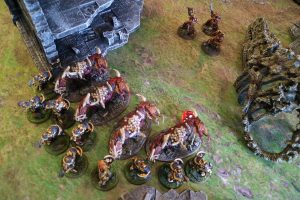 Khorgorath weathering an alpha strike from some Liberators. Brought to you by Bronzed Flesh x2 and Killing Frenzy. 😀

Blood Blessings have unmodifiable die rolls. The best case scenario requires a battalion and brings the success rate from 50% to 75%. Casting rolls are modifiable, and most wizards worth their weight have bonuses to casting. The success rate on a 6+ spell with +1 to casting is 83%.

Blood Blessings have an unmodifiable range of 16”. This puts you in a strange position with enemy units. Most units are likely to be within striking range on subsequent turns. Must spells usually have an 18”+ range. Furthermore, you can bolster the range of spells with the a balewind vortex. To mitigate risk, engage enemy units that threaten your priests before they engage you whenever possible.

Failed rolls have a 33% chance to do D3 damage to the priest. This is a real threat. Even while rerolling these Blood Blessings I somehow manage to deal at least 3 mortal wounds to my Slaughter Priests each game. Accept that this will happen. It’s part of the game.