Today we look at the Krootox Riders, in the Elite slot. Click to read on, or check out the Tactics Corner for more reviews and strategies.

Krootox Riders were once the “heavy weapons” of a Kroot Carnivore unit, but have since been split off to being their own separate unit. They have a very unusual statline, with movement 7″ being equivalent to other Kroot and weapon skill 3+ plus ballistic skill 4+ being the same. From there, however, they diverge- strength six puts them on part with most monstrous creatures, while toughness five is a bit weaker but still quite significant. Four wounds is likewise fairly beefy and two attacks is weak but not trivial. However, they are damned by a 6+ armor save, giving them functionally no defense at all against even the lightest of weapons, and leadership six does them no favors either. They are, at least, reasonably cheap at 28pts per model and can come in units of up to three.

Since they do not benefit from Sept Tenets, the only special rule that a Krootox has is Agile Brute, which lets them automatically advance 6″. However, since they cannot charge or fire their weapons after doing so, it’s a rule that will virtually never matter.

Each Krootox Rider is armed with a Kroot Gun (48″ S7 AP-1 DmgD3 Rapid Fire 1), a weapon with a profile almost as strange as its bearer’s. They also have Krootox Fists, which are a Dmg2 melee weapon with no other stat modifiers.

Although less abysmal than the Shaper, Krootox still end up being a very underwhelming unit for a variety of reasons. The most obvious, of course, is their immense fragility- it is quite plausible that a single Heavy Bolter firing once will kill an entire Krootox Rider by itself, and that is not what you want to be seeing from a 28pt model. Their statline is perfectly poised to make them vulnerable to virtually every gun in the game- light infantry weapons like Bolters and Lasguns can take advantage of their weak save while heavier weapons can deal multiple damage per hit, dragging them down quickly and with ease. It’s very much worth noting that being only T5, even the weakest of guns still wound them on a 5+ (as opposed to 6+), making them doubly vulnerable to such volley fire.

Their armament is actually not awful overall, although it isn’t particularly amazing, either. The weird Rapid Fire profile on the gun was a lot more of a hindrance in previous editions, but with the smaller board size and closer engagement ranges Krootox are likely to be able to get two shots off most of the time, putting them on par with Autocannons while also being mobile to boot. Unfortunately for them, however, the Tau codex also contains the Missile Pod, which does the same thing but does it better and for what is usually a superior cost-to-firepower ratio. A Crisis suit, for comparison, can carry three Missile Pods but most certainly is not three times the price of a Krootox.

When the Krootox was able to be taken as part of a Carnivore squad, it did actually serve a purpose- you could use them as embedded heavy weapons, something Tau in general and Kroot in particular lack, while also having the option to soak wounds with them or use them in combat against bigger targets where the Kroot’s pile of weak attacks wouldn’t be enough. However, in shifting over to be a unit of their own, the Krootox has become significantly less useful and sees play even more rarely than before; we can only hope that the eventual 9E codex release might see fit to reintegrate them into squads or give them a better profile (e.g. 4+ armor save) to give them a chance of staying alive.

Although not the worst unit in the book, the Krootox’s extremely aged model makes them a hassle to add to an army in addition to being an underwhelming choice from a mechanical perspective- the metal and Finecast version are both quite terrible to work with, largely killing any appeal the unit might have for most players. The discontinuation of Forge World’s larger Kroot models also makes conversion a non-option for any but the very richest, so the Krootox’s fate is probably sealed as more and more old sculpts are moved over to Legends.

As always, remember you can get your wargaming supplies at great discounts every day from the Frontline Gaming store, whether you’re looking to start a new army or expand an existing one.

I appreciate your articles and insight, but thought I’d be a little cheeky with this one. 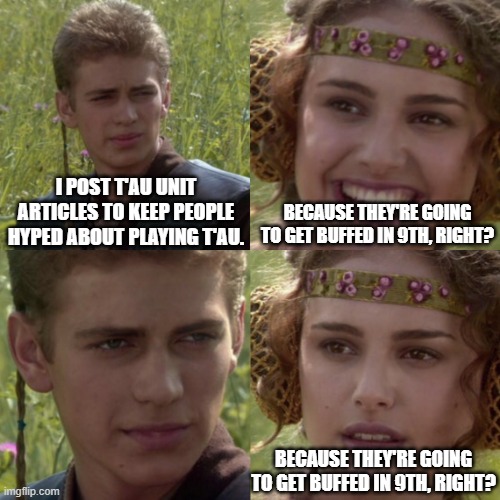 Would love for Krootox, or really any Kroot unit to be viable in 9th. The concept is interesting and fluffy, but the tabletop rules just never worked out. Even as far back as when I was playing in 6th. Only Kroot were decent and only then as a speed bump.

Hopefully the new codex has some meat to it.

If the stratagem were even passingly relevant I would’ve mentioned it. If you have a full-strength squad of Krootox, which no one will ever take, and you charge into combat, which you probably won’t because most things easily outclass them even with the bonus, then you can spend 1CP to kill roughly one extra Marine.

The stratagem is meaningless.

For 1 CP on Raging Beasts (you probably also spent 1 CP on a Pack Alpha Shaper so you can reroll the charge and another 1 CP so you can outflank) you go from mostly getting tangled up in blue to a 40% chance to punch five Intercessors off an objective in the Fight phase. That’s pretty darn valuable for the Tau in 9e and at 109 points it’s not too expensive.

I agree Krootox Riders are fragile as heck and certainly have their drawbacks, but the tweaks in TGG at least made them fun melee glass cannons with a unique role in the army. I haven’t even touched on their 6″ Heroic Interventions with Ambushing Predators.

I think with this review you simply have to look at the stratagems available. This is a counter-assault unit with some marginal extra shooting capability.

I have been running two full size squads and 12 attacks WS3 S6 AP -2 D2 are not to be sniffed at, they are the one unit the Tau have which can seriously threaten to clear enemy troops off an objective and take it. The fact that they can do so on the enemy turn with Ambushing Predators just creates an additional threat that an opponent has to account for before you even consider spending the CP on it.

They can also protect your fragile troops on objectives just by standing nearby with the implied threat of Ambushing Predators should anyone assault the troops. Mine have a surprisingly solid list of enemy kills in this role, they mess with pile-ins to protect the troops and then punch back.