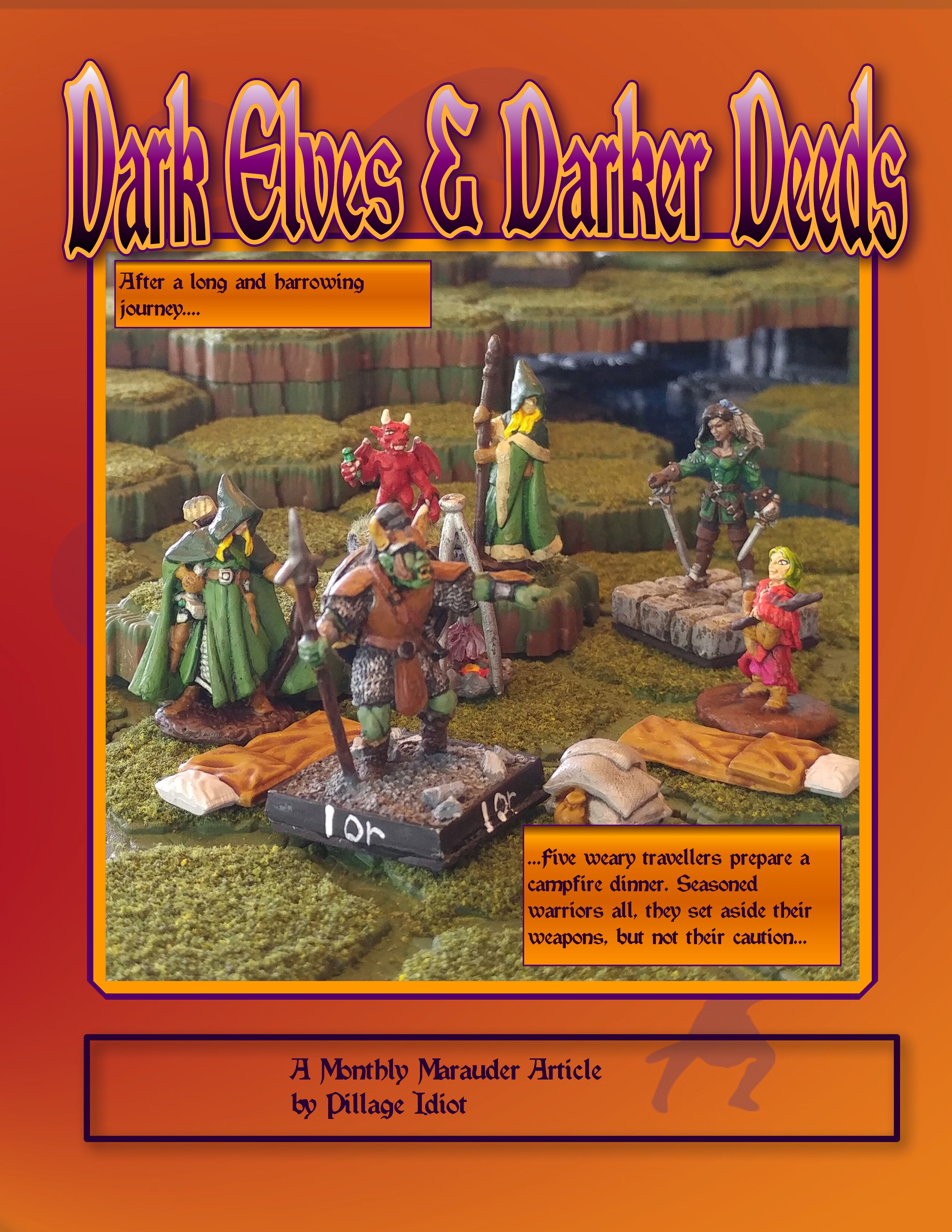 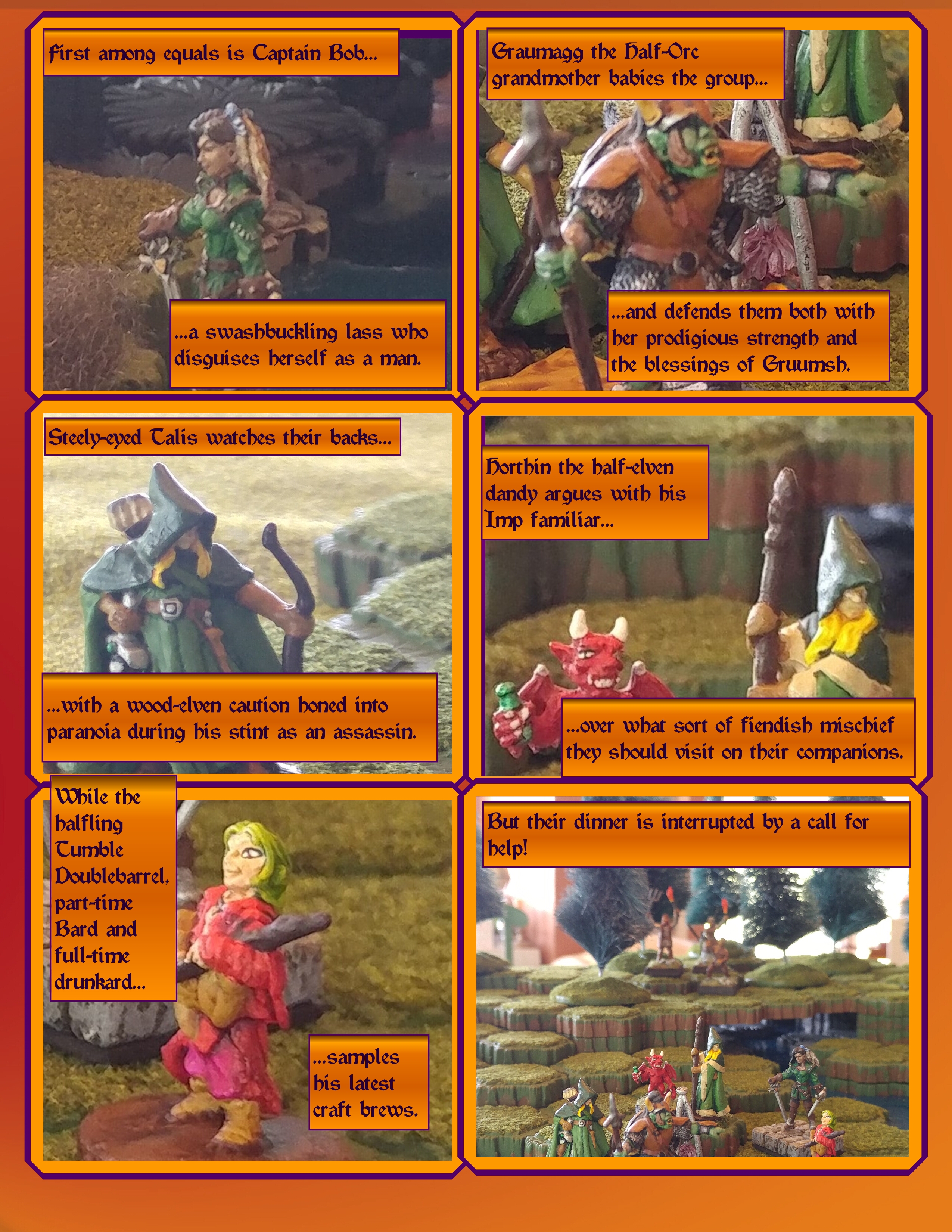 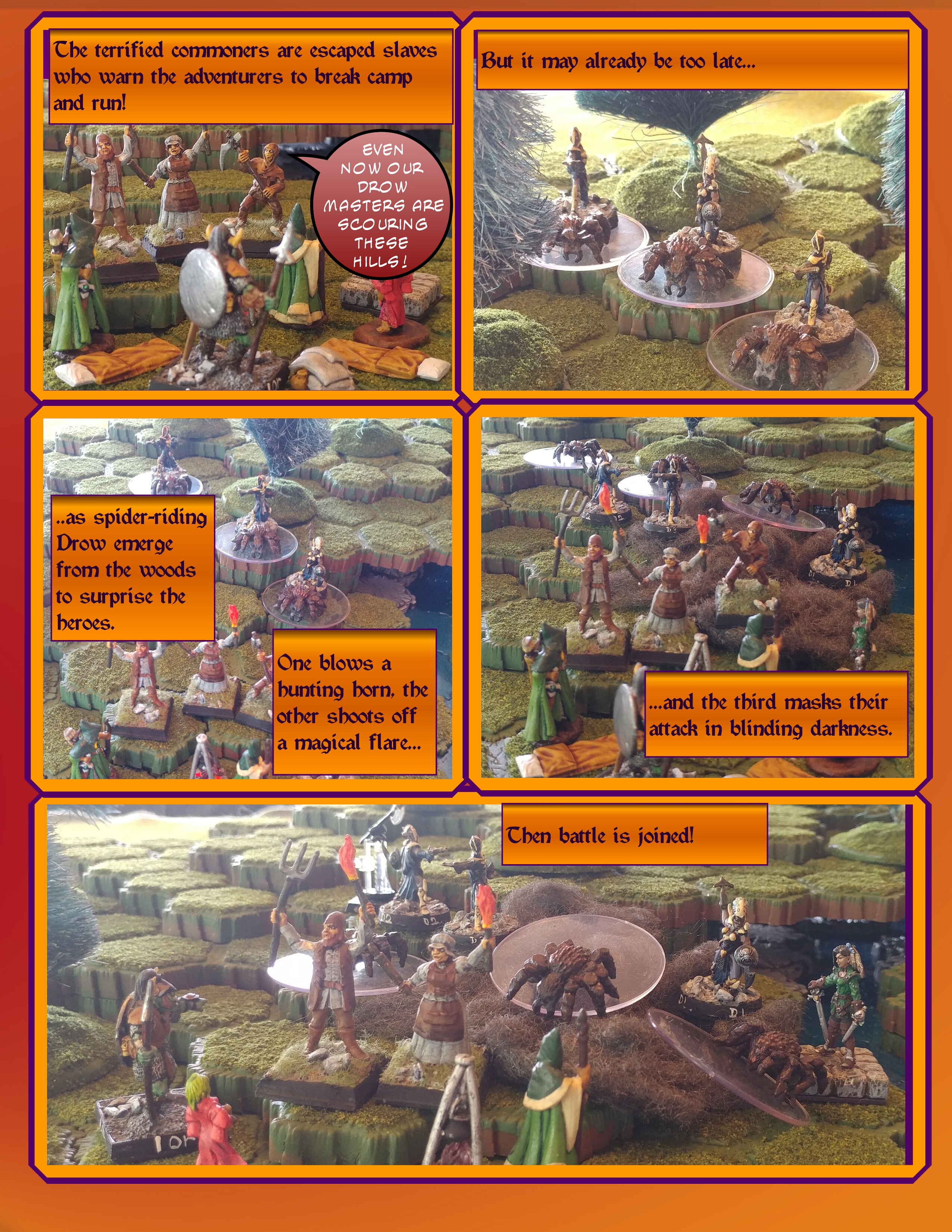 A very fun and colorful D&D encounter from Pillage Idiot!

Welcome to Pillage Idiot’s Monthly Marauders, a series of articles in which I, Pillage Idiot, provide you, the Fifth Edition Dungeonmaster, with short encounters designed to frighten, harass, and possibly even kill your over-confident players. Each Monthly Marauder carefully adheres to the encounter guidelines found on pages 81-85 of The Dungeonmaster’s Guide, so you needn’t worry about these monster attacks being “unfair”. If your characters die, it’s their own fault! You can forward any player complaints directly to me.

Our first Monthly Marauder is a band of Drow cavalrymen hunting the night-haunted woods for escaped slaves. But these dark elven outriders aren’t mounted on horses; they’re mounted on giant spiders. The spiders’ blind sense synergizes well with the Drow’s innate spellcasting abilities, so this encounter should surprise and challenge even the most seasoned players. It’s also thematic, since Drow and Spiders go together like Chocolate and Peanut Butter. This Encounter is rated “Hard” for a group of 4 Fourth Level characters, or 5 Third Level characters.

This Monthly Marauder is best sprung on the characters when they are setting up their camp, or even during a late-night watch. There will be plenty of time for the night watchmen to awaken their companions before combat begins, so either time works equally well. When you are ready to begin, you may read or paraphrase the following:

“The woods are dark and silent, clouds covering the moon and stars. Now and again you hear the shuffling movement of a small animal, cracking the occasional twig or dry leaf, but the source of those sounds remains distant and hidden. The dark outlines of tree trunks rise like a wall of spears against the darker background of the night sky. But then you see three lights descending the hill toward you, blinking in and out from behind the trees. The lights are not the orange or red of natural torchlight, but violet, green and blue, respectively, flickering with obvious eldritch energy. As the lights approach, you hear the sounds of heavy footfalls and panting. They finally emerge from the woods and underbrush to reveal two men and a woman, ranging in age between twenty and thirty, dressed in threadbare tunics and breeches. They are glowing with eldritch fire. ‘Help us!’ they cry out in seeming desperation. ‘Flee from this place and take us with you!’” 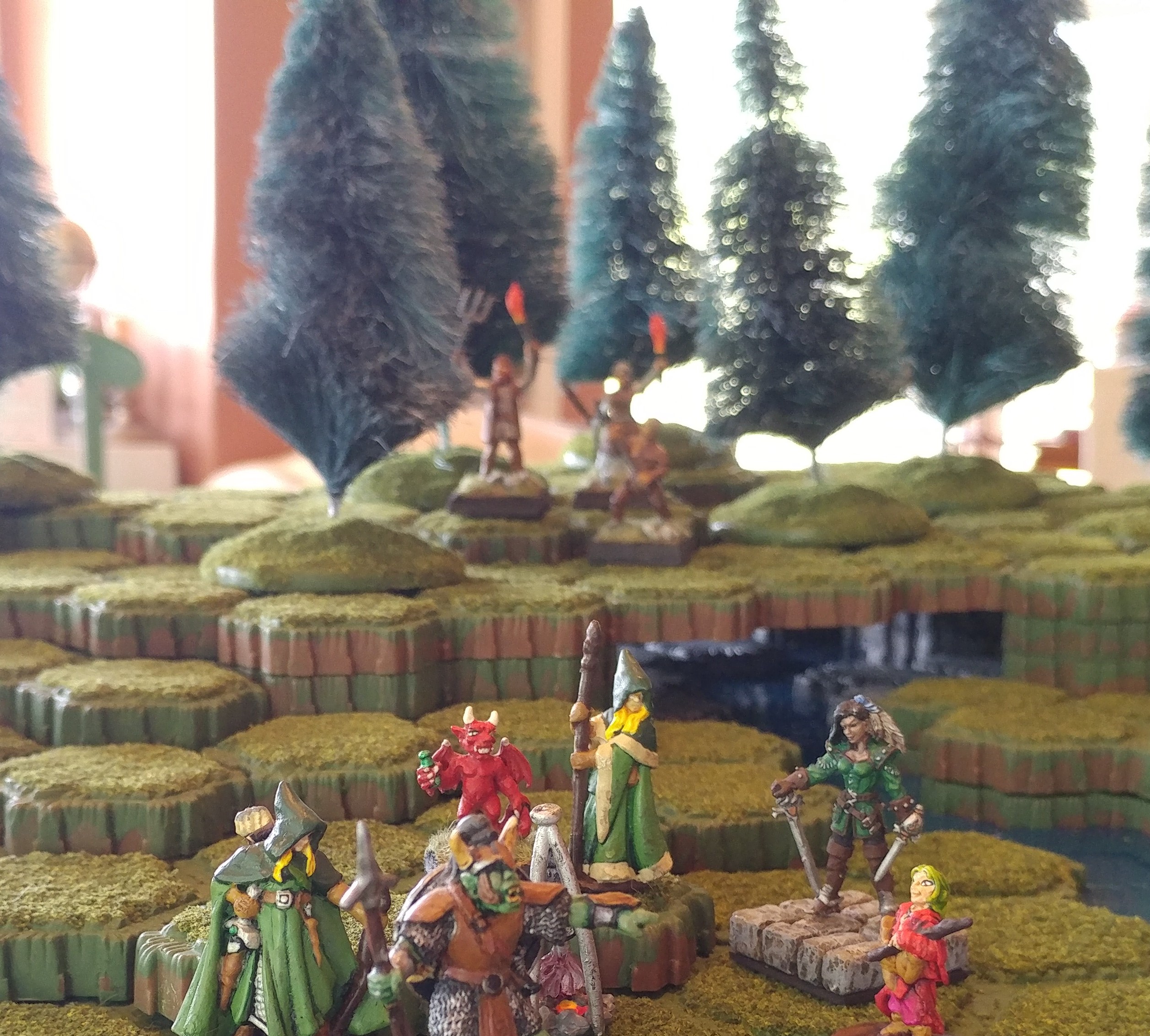 The men and woman are panicked and unable to explain themselves other than to plead: “They’re coming! We have to leave!” Their screams will wake any characters currently trying to rest.  A DC 15 Charisma (Persuasian) check will allow them to calm down and explain what is going on:

“Our village was attacked by a Drow war party three nights ago. They took us as slaves and have been driving us hard toward an entrance to the Underdark. Tonight our guards began to argue, and we took the opportunity to run. We almost got away but they spotted us. They’re only moments away!”

Suddenly the flames surrounding the men and women go out, and the area is plunged back into darkness. 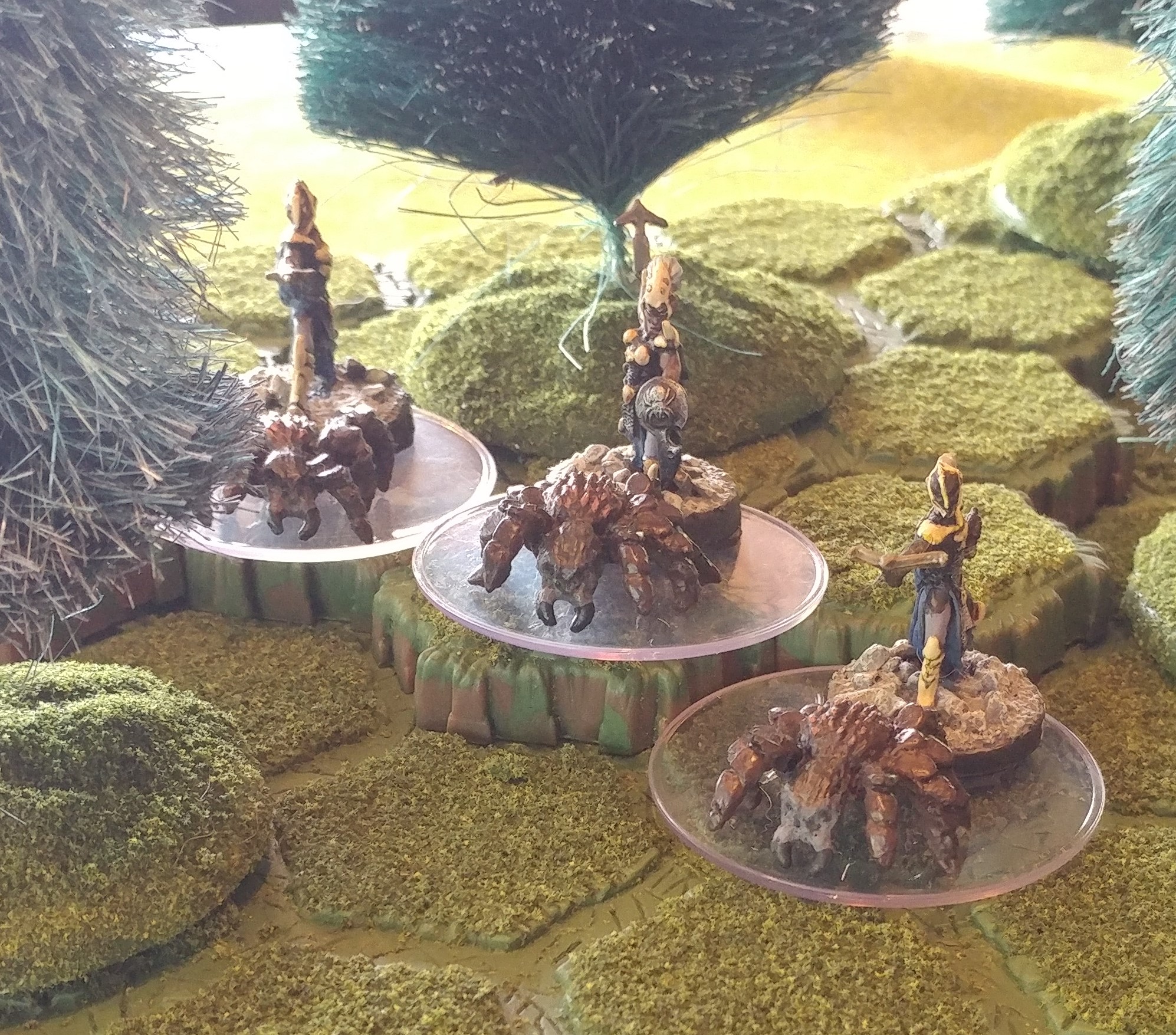 During the surprise round (or the first round of combat if there is no surprise round) one of the Drow will blow a hunting horn, alerting other dark elf patrols that they’ve cornered their prey, and the other Drow will cast Dancing Lights 120’ directly overhead, in order to signal other dark elf patrols their current location. The Drow Spy will dismount and cast darkness, attempting to hide as many Spiders and Drow as possible. The Spy will then use Cunning Action to hide as a bonus action. The Giant Spiders should be treated as independent mounts (Player’s Handbook p. 198) so they will move and attack on their own initiative. Even though you should play them as mindless beasts, instinctively attacking the closest enemy, the Drow have trained them to try and stay in the dark so you are justified in optimizing their blind sense. You may choose to have the Drow dismount on their turn so they can shoot with their more dangerous crossbows, or you could have them attack in melee from the backs of the Spiders with their shortswords. 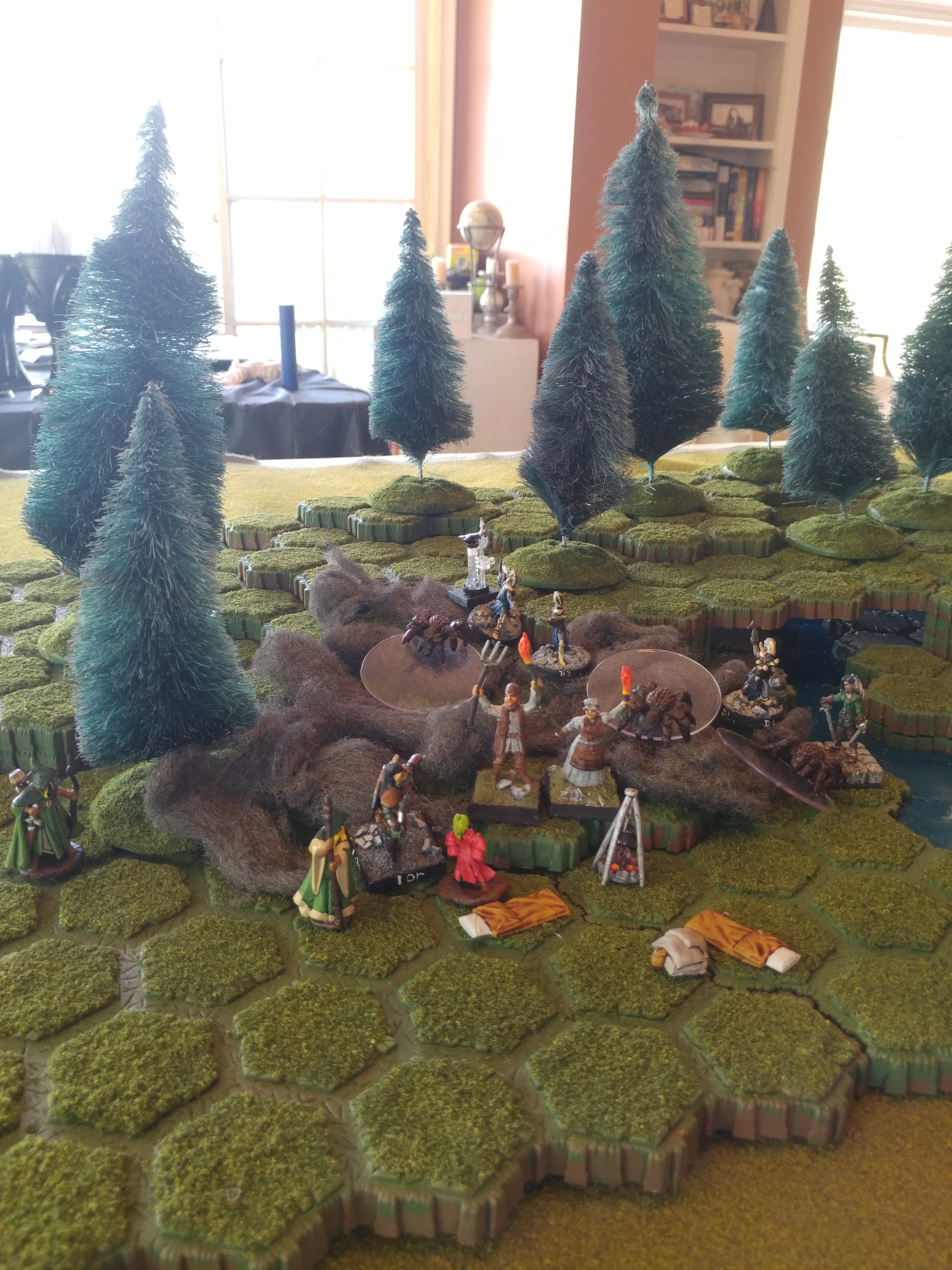 Here’s the fun part: fighting in darkness. The darkness spell imposes the blinded condition (Player’s Handbook p. 290) on everyone affected by it. That means blind attackers are at disadvantage. However, blind defenders are attacked with advantage. Advantage and disadvantage cancel out, so the net result is that blind attackers and blind defenders fight normally. There are no special rules for knowing exactly where an enemy is (though as Dungeonmaster you are free to invent one), so again, by the book, blind characters simply fight normally (if you need a justification consider that combat is noisy enough that everyone has a general notion of where their opponent is standing). However, the darkness can still have a significant effect on the battle.

First, in order to make an opportunity attack (Player’s Handbook p. 195) a creature must be able to see its target. Since darkness causes the blinded condition, effected creatures may not take opportunity attacks.

Second, Giant Spiders have blindsight out to 10’, so if they’re in melee they do not suffer the blinded condition. That gives them advantage on their attack rolls, and blinded characters have disadvantage attacking them. Giant Spiders may also take opportunity attacks since they are not blinded.

Third, spells that require “a creature that you can see” or “a point within range that you can see”, which includes most combat spells that don’t require an attack roll, can’t be cast by a creature who is blind. This effect alone can really cramp the style of players who rely on arcane spellcasting. This also prevents the use of healing word on characters who are injured in the darkness.

Fourth, complete darkness means that every creature affected by it can choose to hide. It normally takes an action to hide, but the Drow Spy (and any character with cunning action) can hide with a bonus action. She will do so every turn after she attacks, so any character with a passive perception lower than her Stealth roll will be unable to target her.

Fifth and finally, even though blind characters fight each other without penalty, they still technically have both advantage and disadvantage. That means they can’t sneak attack, even if an ally is within 5’ of an enemy, since they have disadvantage. The Drow Spy will be unable to make use of her sneak attack ability, as will any characters.

If the characters attempt to break camp and escape, it will take ten minutes to pack up. At the end of that time, just as they are about to leave, they will be attacked by a second group of Drow cavalrymen identical to the first. Horns will still be sounding and answering throughout the woods as more Drow cavalrymen zero in on the characters’ positions.

Once the second group of Drow has been defeated, the characters can attempt to outrun their pursuers and escape.  Remember, though, that characters reduced to 0 hit points by a Giant Spider’s poison are paralyzed and that condition can’t be eliminated by healing them – it requires a lesser restoration spell. So poisoned characters will need to be restored, carried, or left behind.

Characters trying to escape will glimpse Giant Spider-mounted Drow hunting them through the woods. The characters can duck behind trees and cover their tracks to avoid detection. They need to make a DC 12 group stealth check every ten minutes or they will be spotted by and attacked by another Drow patrol. Once the characters succeed at 3 such checks in a row the Drow will stop pursuing them.

Awesome stuff, loved the comic book style art pages and the adventure in general was just a lot of fun!

Thank you Reecius! So glad you dug it!

Absolutely wonderful to have some more D&D content on Frontline!

I really like the proposed synergies you’ve got in the article here. Utilizing the Darkness spell is letting your players play with so many other game mechanics; Stealth checks from the Spy, different vision types, concentration (if the drow casting the spell is damaged)

I also really like the idea of flavoring the generic NPC rolls (like Spy) with racial abilities elsewhere in the MM. Somehow I’ve never actually utilized that! Great idea.

Oh! And the comic book pages made with minis!? It’s got a delightful retro/old-school flavor to it.