Hot on the heels of yesterday’s look at the Imperial Fists, today we’re taking a look at Codex Supplement: Salamanders. Throw another log and/or heretic on the fire and gather round to learn more.

The Lords of Nocturne are born in fire and forged in battle – they are humanity’s finest warriors and artisan craftsmen. As the heirs of the Primarch Vulkan,* they are bearers of baleful fire and possess the strength to hammer their adversaries into ruin. 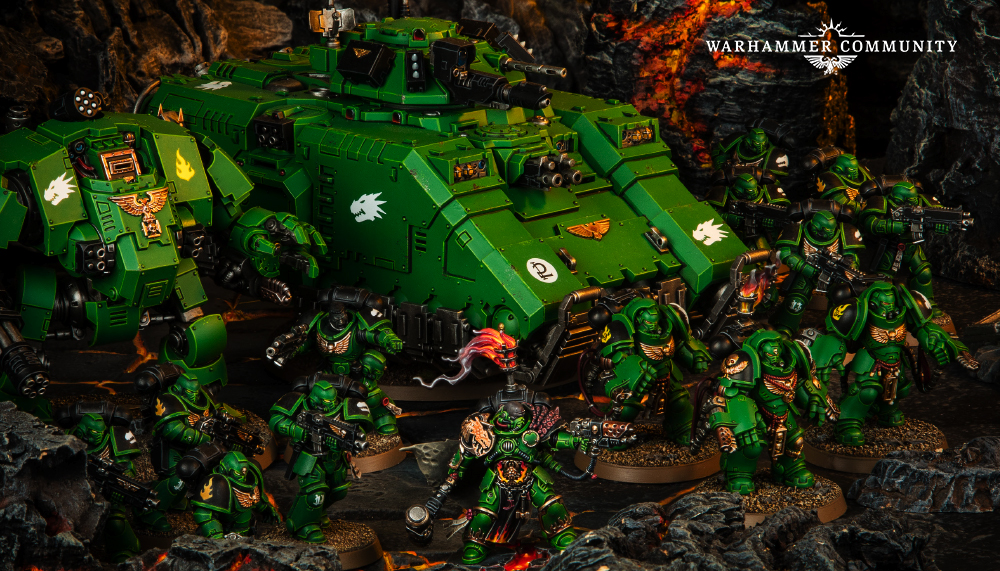 Take the deepest dive ever into the Salamanders Chapter. The codex supplement features full details of their organisation, including the Salamanders’ history from the glory days of the Great Crusade right up to the Era Indomitus. Read accounts of their greatest victories, as well as a look at each company, exploring why there are only seven of them.

It also contains datasheets for two unique units (Adrax Agatone and Vulkan He’stan) and a whole raft of special rules for the Salamanders and their successor Chapters. 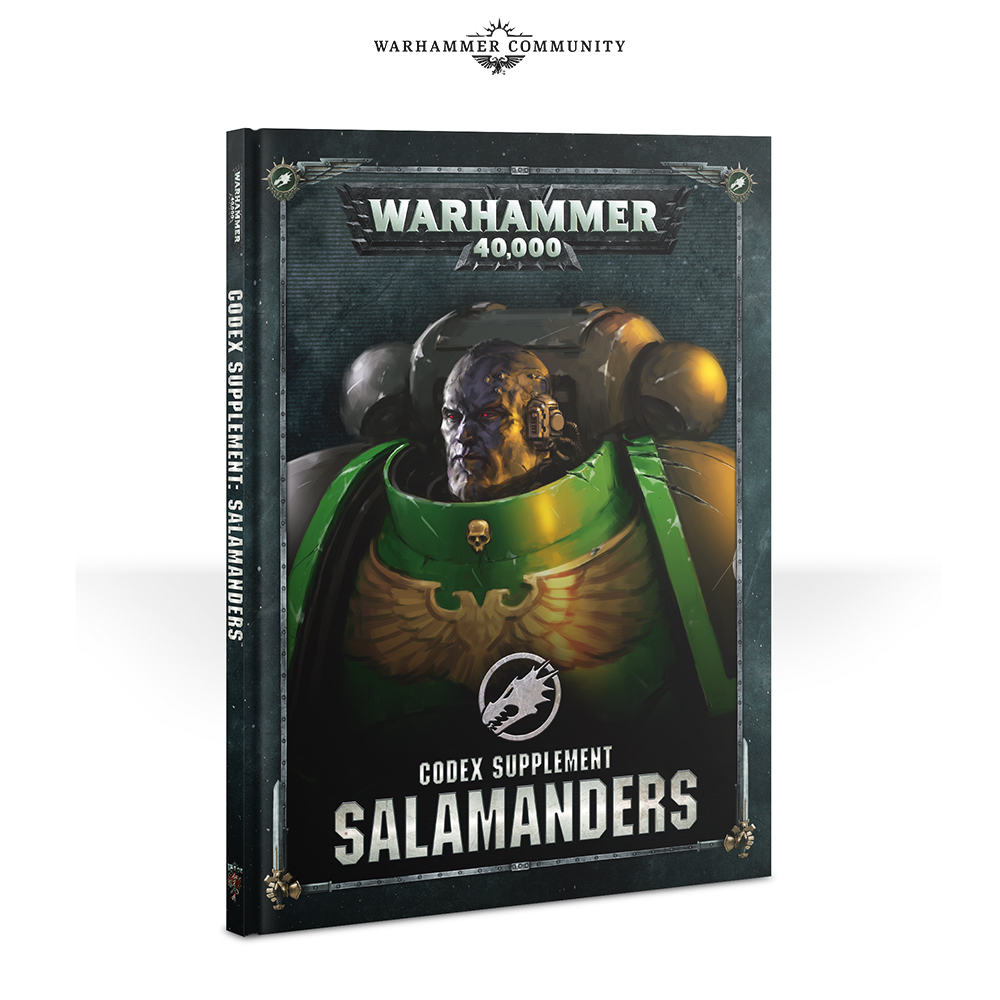 The Salamanders’ love of flamer and melta weaponry manifests as a new Chapter ability, Promethean Cult. Since you can’t switch to the Tactical Doctrine until the second turn, you can spend your first making sure that you get into range with your various heat weapons to then absolutely devastate your enemies. 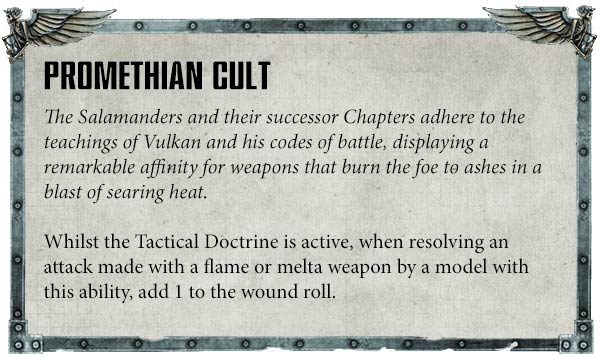 The fires of Nocturne that burn in the hearts of the commanders of the Salamanders are represented by six new Warlord Traits. If you’ve packed your force with lots of flamer weapons, then you’ll want to choose Lord of Fire. 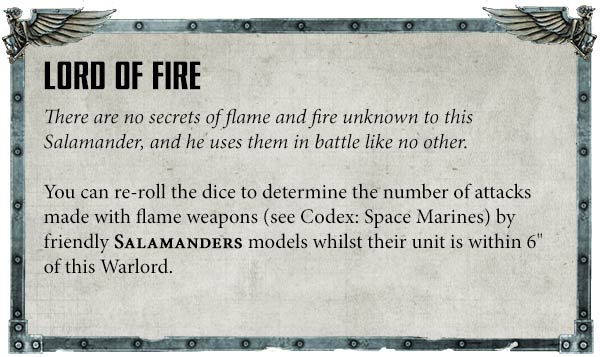 Of course, fire isn’t just an offensive weapon. Thanks to the new Promethean discipline, you can use the Fire Shield psychic power to protect your own warriors. 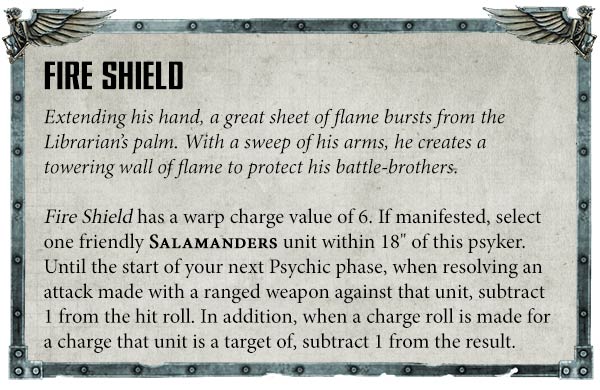 As you’d expect from such master artisans, the Chapter fortress-monastery on the moon Prometheus is packed with a wide variety of beautifully crafted but deadly weapons such as Drake-smiter. While your enemy breaks themselves on the anvil of your Salamanders, what could be better to finish them off than a big hammer? 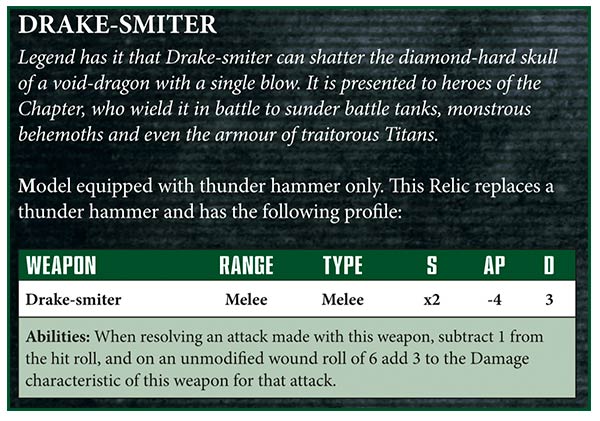 The only drawback to flamer weaponry is that it’s possible to roll badly for your number of shots. Well, the Salamanders have got you covered. With the Flamecraft Stratagem, you can guarantee the maximum number of shots from your fiery firepower. This means that you’re guaranteed 12 hits when you use the incendium cannon on your Invictor Tactical Warsuit! 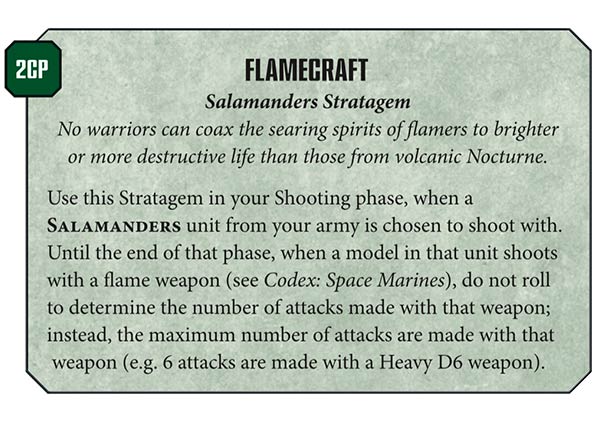 That’s just a small sample of the goodness contained within the hot new Codex Supplement: Salamanders. If you like your Space Marines friendly(ish) and flame-toting, make sure you get a copy. 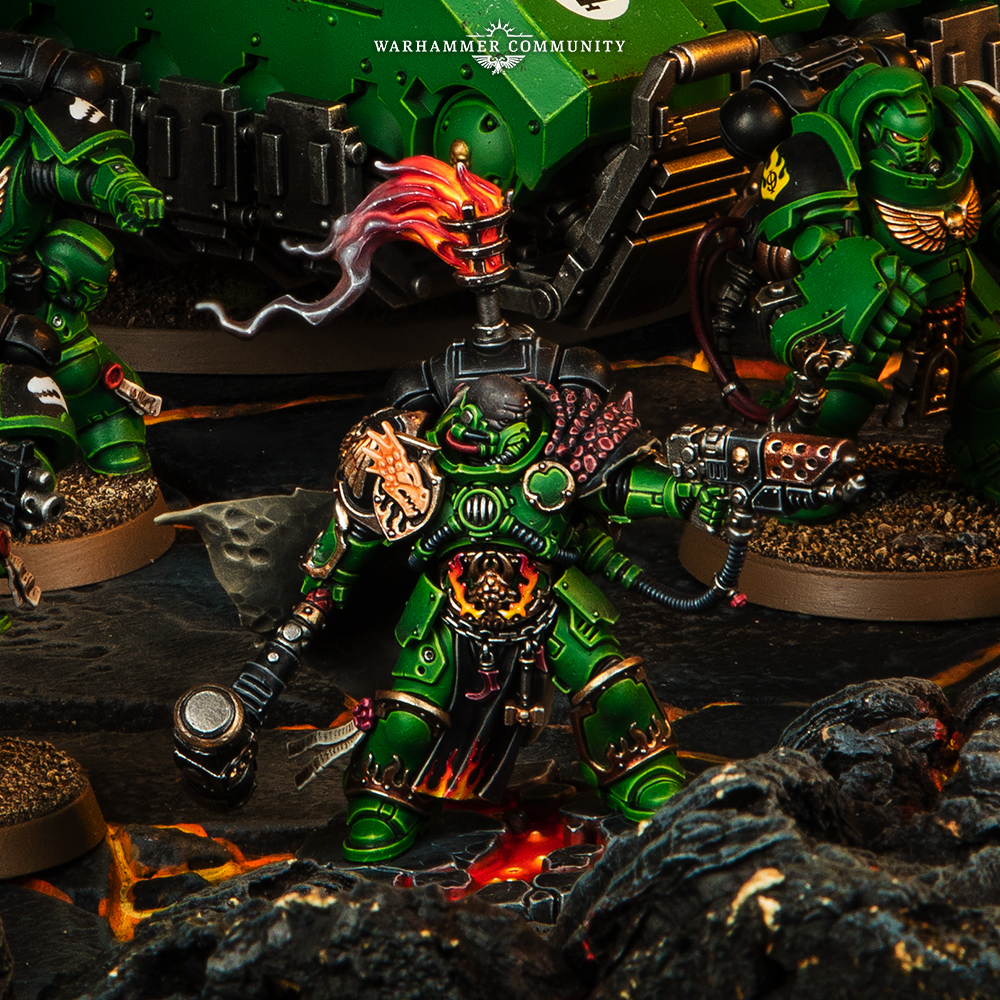 Adrax Agatone is the Captain of the 3rd Company, known as the Pyroclasts. Like the warriors he commands, he is a bringer of burning death. Adrax comes armed with two unique weapons – Drakkis, a hand flamer, and Malleus Noctum, a thunder hammer.

As with all Space Marines Captains, he has the Rites of Battle aura ability as well as an additional one called Unto the Anvil. Combined with the Shock Attack rule, this will mean that your Salamanders hit harder than a herd of Grox in close combat.

He’s also equipped with a special piece of wargear – a cloak which protects him from the worst of incoming damage.

Adrax Agatone is a great choice to lead your Salamanders army into the crucible of battle, as is Vulkan He’stan, whose datasheet is also featured in the codex supplement.

Codex Supplement: Salamanders and Adrax Agatone are available to pre-order from Saturday. Get ready to turn your foes to ash now by picking up a unit of Primaris Aggressors and equipping them with flamestorm gauntlets.

* Learn more about the Primarch of the Salamanders in the awesome Vulkan: Lord of Drakes from Black Library.

← This Week in the ITC 10-16-19: The Iron Hands Arrive and Nobodies Retire! News at 11
Let’s Use Our Libraries! →
0 0 votes
Article Rating
Subscribe
Login
12 Comments
Oldest
Newest Most Voted
Inline Feedbacks
View all comments

1 Aggressor model with Flamecraft puts out about the same firepower as a 10 man tactical squad with bolters.

Sternguard squads in drop pods with the marksman successor trait can dish out some pain turn 2 with flamecraft. Toss in a Lieutenant with that 9 man squad for extra hurt.

Definitely excited to see the other stuff this saturday when the review videos start coming out. Lot of potential list-styles, curious to see which one will stand out on top.

Just wait till you see the rest of it, it is truly wild how much damage they can do.

*drool* My army might finally be able to make a dent while keeping it somewhat fluffy.

They play like the lore would suggest, IMO. That’s one thing the Marine supplements really got right.

I am pretty concerned about the amount of damage that represent (especially the +1 to wound), but let’s wait a game before panicking.

Well neither melta nor flamers are especially good, so it should be fine.

Iron hands: “Oh you are approaching ME!”

Salamanders: “I can’t beat the shit out of you without getting closer”

Yeah, it is well and truly mind boggling.

As I said, the only limitation is delivering the units into range to obliterate everything.

Most of the truly powerful combos don’t work out of a Drop Pod, some very good ones do, but not the most powerful.