You are here: Home › Age of Sigmar › News › Faction Focus: Cities of Sigmar 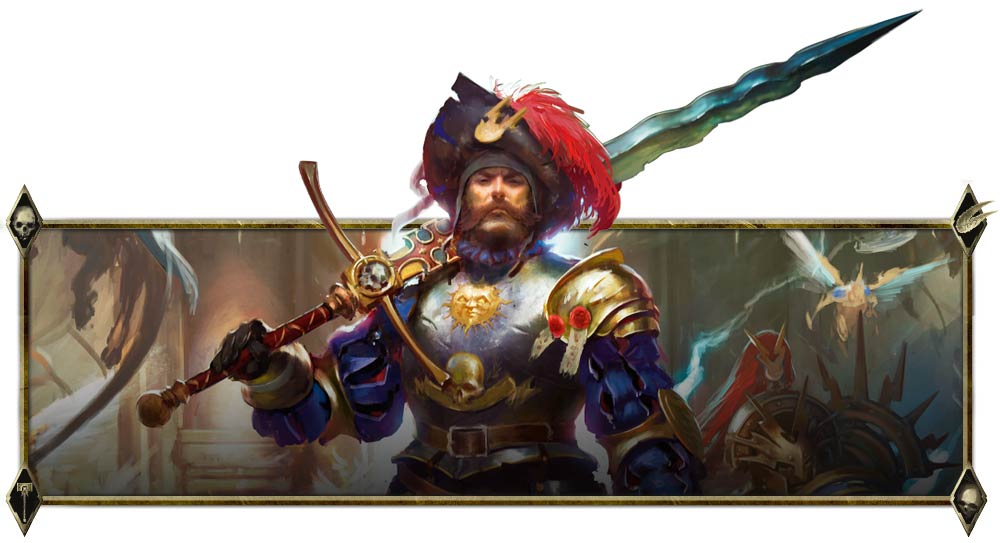 It’s almost here! Very soon, the armies of the Cities of Sigmar will march forth, forging your much-loved collections of aelves, humans and duardin into a single, deadly force and making for what could well be Warhammer Age of Sigmar’s most diverse battletome ever. In today’s MASSIVE battletome preview, we’re looking at just how it all works, what units you can use, and how it all comes together.

Most armies are made up of a pool of units drawn from a variety of factions – for instance, Gloomspite Gitz include Dankhold Troggoths, Moonclan Grots and Spiderfang Grots. In some armies, each sub-faction shares allegiance abilities – like in Legions of Nagash – or benefits from their own – like in Beasts of Chaos, where the Warherds, Brayherds and Thunderscorn all have distinct abilities. These can be further distinguished with mini-allegiances – Idoneth Deepkin of the Dhom-hain Enclave, for example, are particularly good monster hunters on the tabletop. 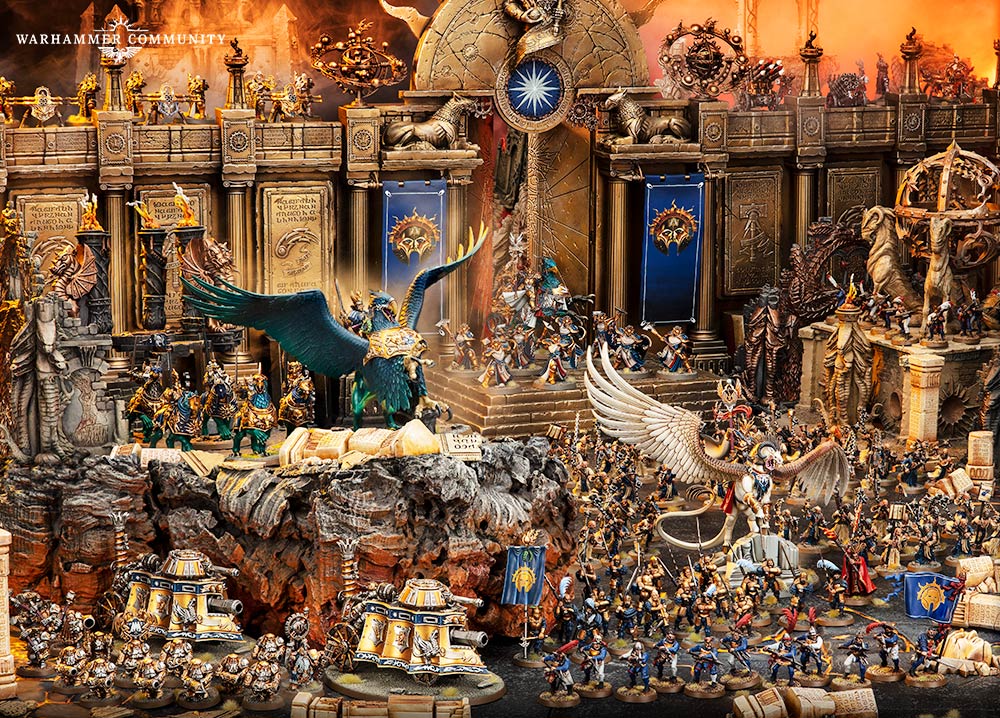 First up – the units! Cities of Sigmar have perhaps the largest potential army roster in all of Warhammer Age of Sigmar, capable of bringing units from (deep breath now) the Freeguild, Ironweld Arsenal, Order Serpentis, Dispossessed, Wanderers, Shadowblades, Collegiate Arcane, Phoenix Temple, Devoted of Sigmar and Darkling Covens. As well as their new Cities of Sigmar keywords, each of these mini-factions retains powerful internal synergies that reward you for taking several of their units – so your Sorceress on Black Dragon might be particularly potent when combined with some Black Guard.

The Cities of Sigmar has a truly ridiculous number of Battleline choices – those core units that every Pitched Battle army needs at least a couple of. This means that even in matched play, you’ll be able to build incredibly thematic and varied forces. Seriously, see everything in this picture? 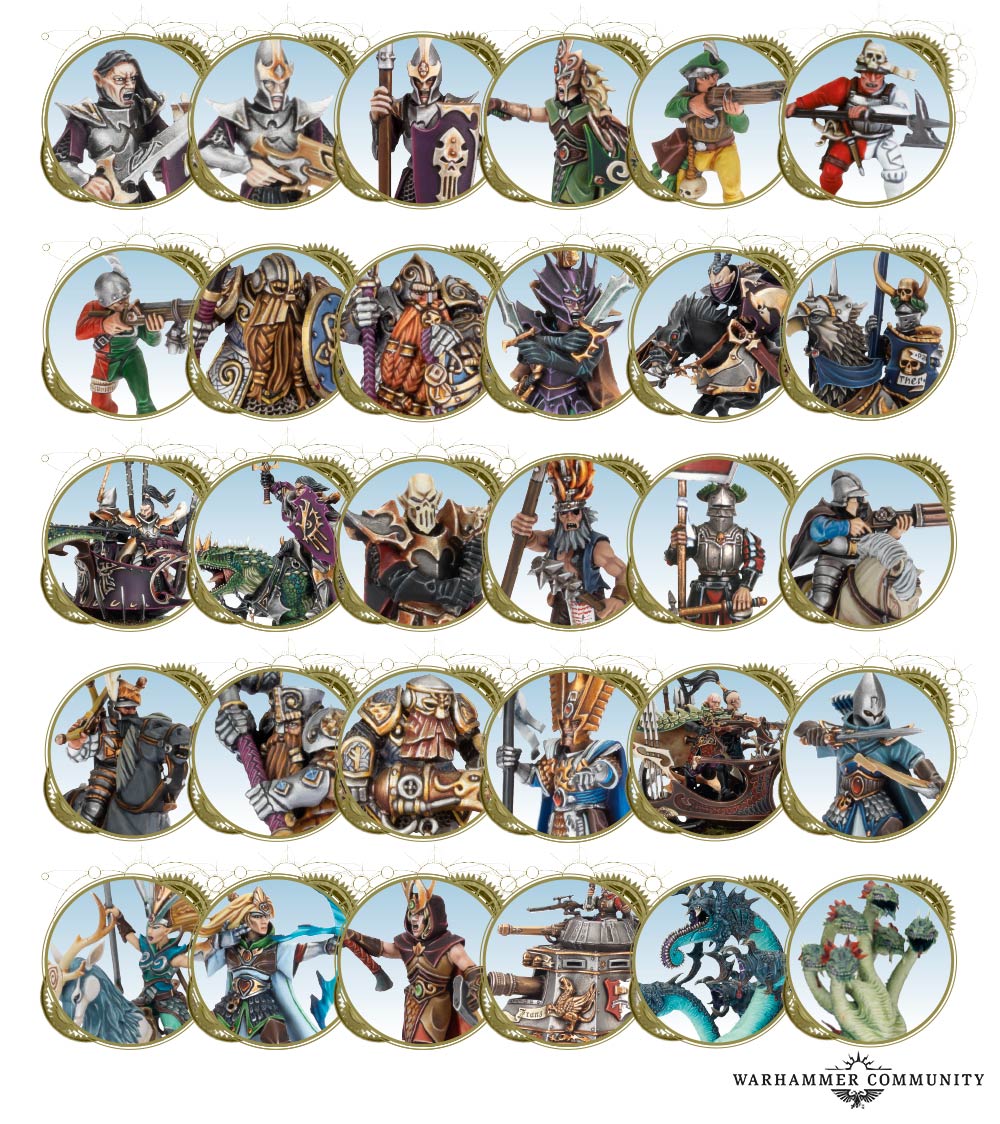 All of it is Battleline – although you might need to choose specific Generals to lead your army to unlock some of it. This means that your Cities of Sigmar army could consist of almost nothing but lumbering Steam Tanks, rapid-striking cavalry or anything else you fancy, built around how you like to play.

And that’s not all! Representing the mighty Stormkeeps that defend the Cities of Sigmar, each army can contain Stormcast Eternals, who gain the relevant keywords of your chosen city, and thus are fully fledged warriors of your army and not allies! 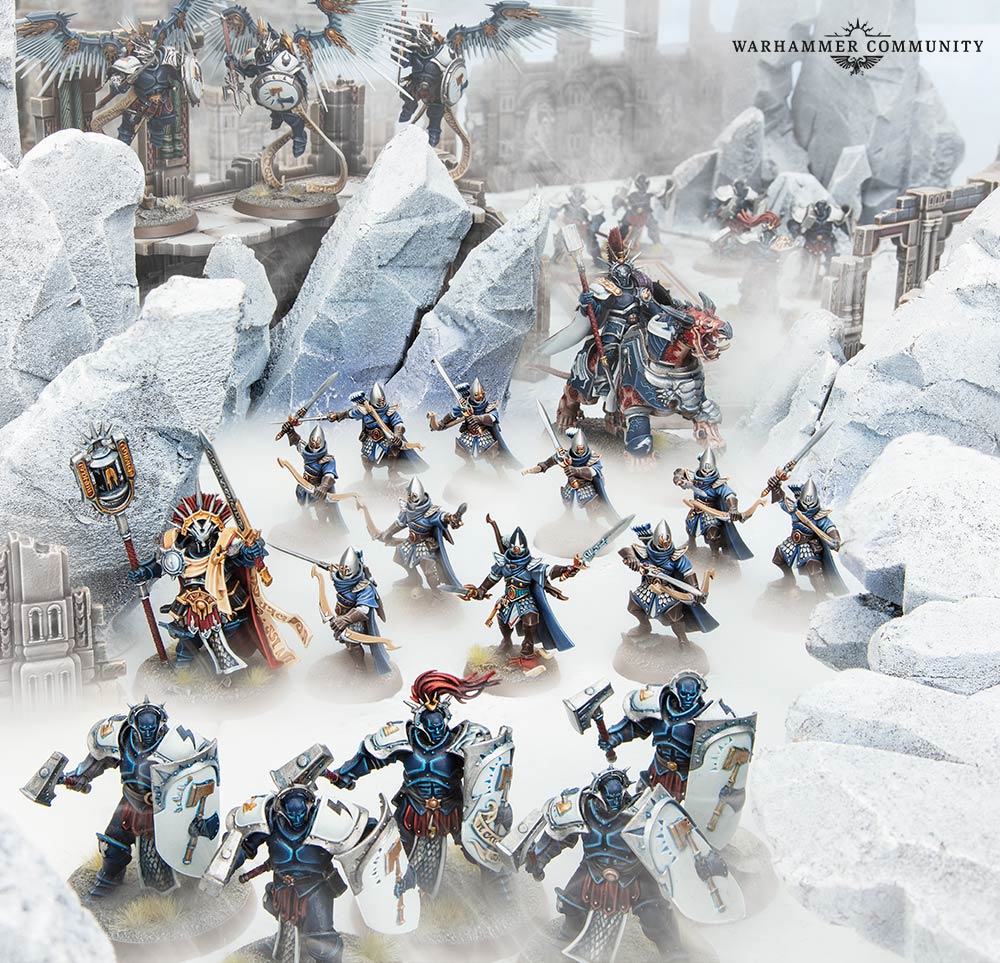 It gets better – certain Cities of Sigmar armies offer even more diversity, with Tempest’s Eye forces able to call on the Kharadron Overlords, while the forces of the Living City can field Sylvaneth units.

To top it all off, many classic warscrolls have been updated to make them fit with the wider army. Shadow Warriors, for instance, are now perfect for last-minute objective grabs, capable of popping out of nowhere using One with the Shadows.

Pistoliers, meanwhile, have a neat new game mechanic where they can fire again after charging an enemy – if you’re willing to risk combat, you’ll be able to gun down enemy units at point blank before they’ve had a chance to react!

These are just a couple of warscroll updates – we can’t wait for you to discover all of the deadly new synergies and upgrades in the book.

Regardless of which city you pick, you’ll have some nifty universal allegiance abilities to benefit from. Generally speaking, these make your smaller Heroes stronger, representing how generals of the Cities of Sigmar use tactics and strategy rather than brute force to win their battles. If you choose a unit with a Wounds characteristic of 6 or less, you can choose another unit in your army to be their retinue. These elite bodyguards can intercept wounds and mortal wounds for their liege, meaning your Freeguild Generals, Nomad Princes, Warden Kings and other unmounted champions are actually pretty durable! 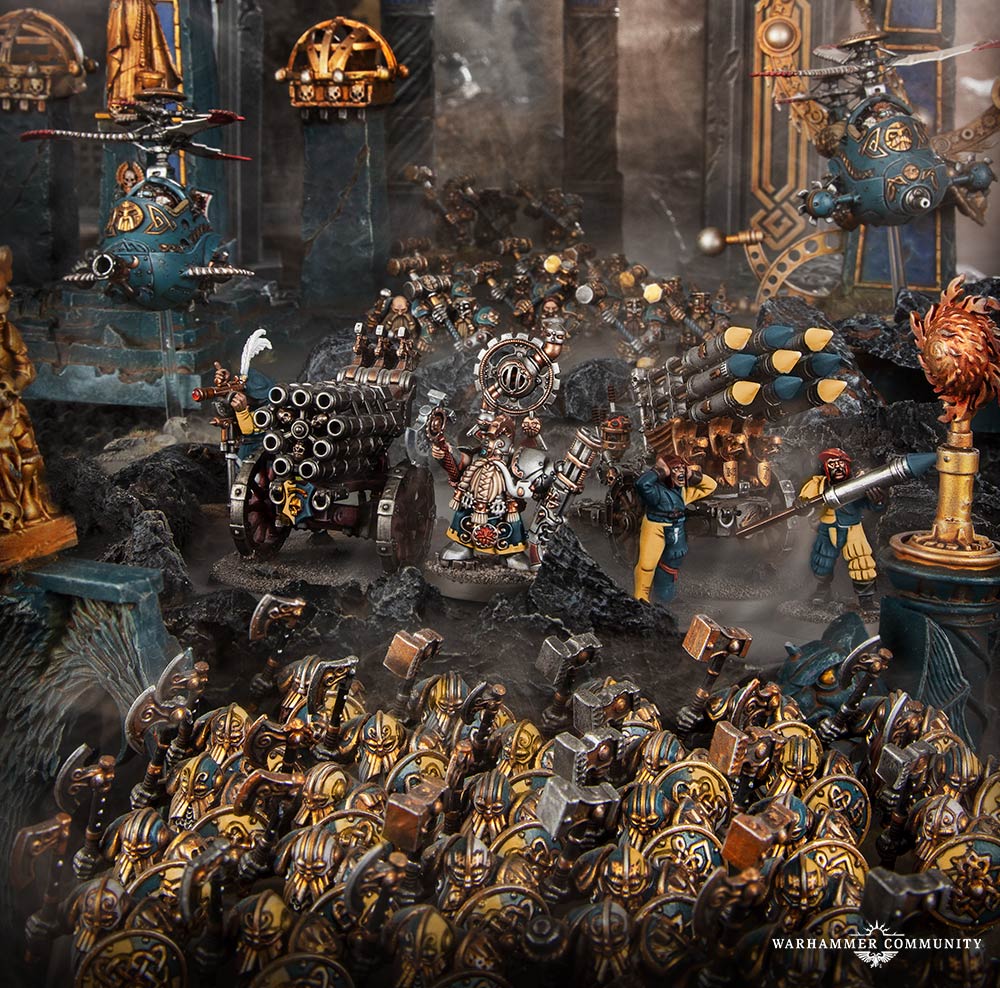 What’s more, any endless spells you cast with a Cities of Sigmar wizard will immediately count as being empowered by their associated Realm, meaning your Purple Suns, Burning Heads and Suffocating Gravetides are even stronger than those used by other armies.

And we’re just getting started…

You’ll be able to further fine-tune your allegiance abilities by choosing a particular city. Each has some associated special rules, a command ability, command traits, spells and artefacts, representing their distinct ways of war. Hammerhal Armies, for instance, benefit from loads of extra command points…

…which they can then use to great effect with the deadly Righteous Purpose command ability!

Just imagine combining that with a big block of Demigryph Knights. Bloodreaver salsa, anyone?

Any city can use any combination of units from the book, but certain cities are great when combined with specific units. Greywater Fastness forces, for instance, are all about guns, guns and more guns! Home of the Great Ironweld Guilds makes your Ironweld Arsenal units even deadlier, as well as letting you bring even more Artillery to bear in your battles.

Combine this with the Drillmaster command trait, and suddenly, your gunline is looking very dangerous indeed.

We’ve just scratched the surface – there are countless deadly combos to explore and thematic rules to master. Hordes of Flagellants throwing themselves into the fray alongside Flamespyre Phoenixes, magic-slinging cabals from Hallowheart, aerial strike forces from Tempest’s Eye – you’ll have to get the battletome for yourself to explore it all! 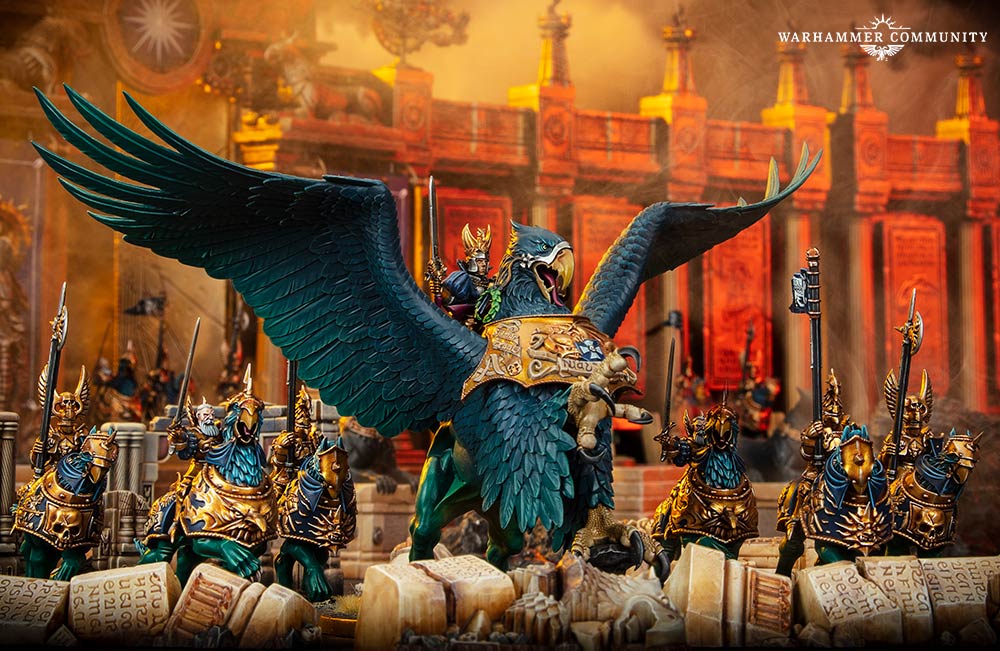 Lastly, we’ve got warscroll battalions! These are a little bit different from those found in other battletomes, as each is associated with a specific City of Sigmar, meaning you’ll be rewarded for focused army building with some absolutely excellent additional abilities. Take Anvilgard’s Charrwind Beastrunners – a force made up purely of Scourge Corsairs that’ll make mincemeat out of enemy Monsters. 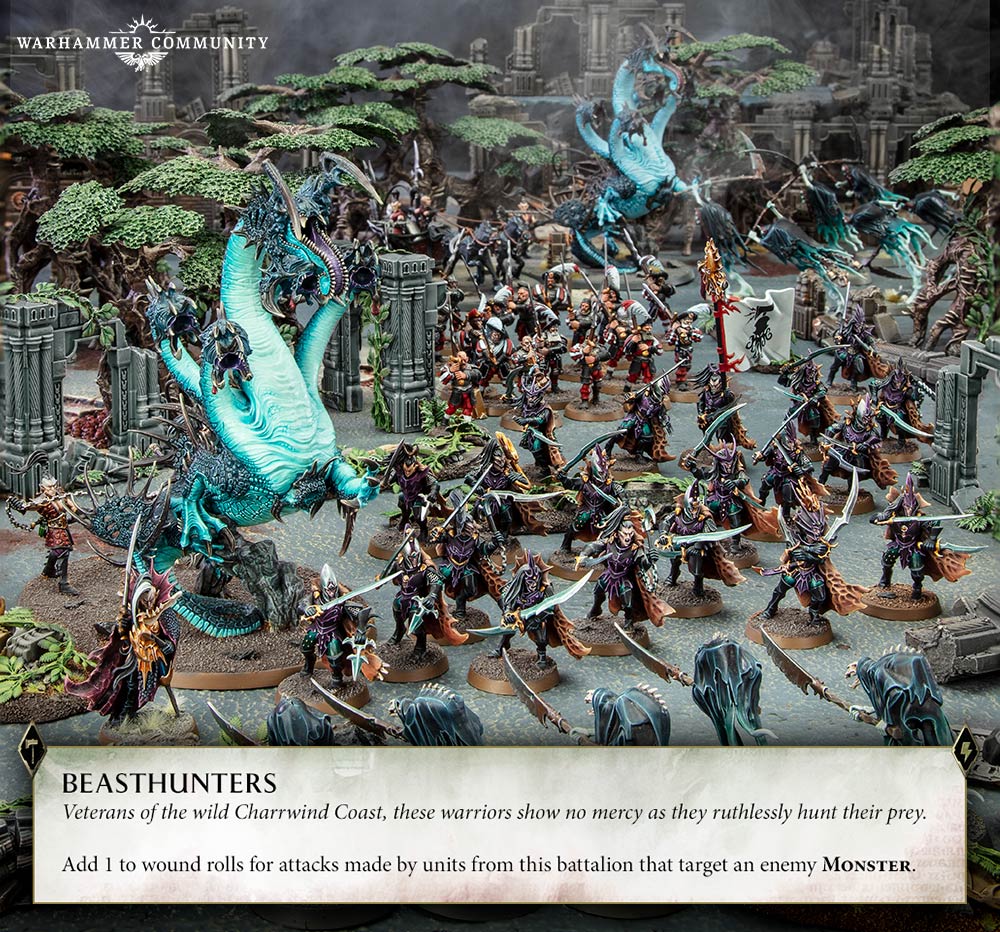 What if you’d rather master Monsters than slay them? We can think of no better choice than the Phoenicium’s Phoenix Flight, which makes Frostheart and Flamespyre Phoenixes even harder to kill. Throw in some Phoenix Guard for your Battleline choices, and voila! You have an army that just will not die. 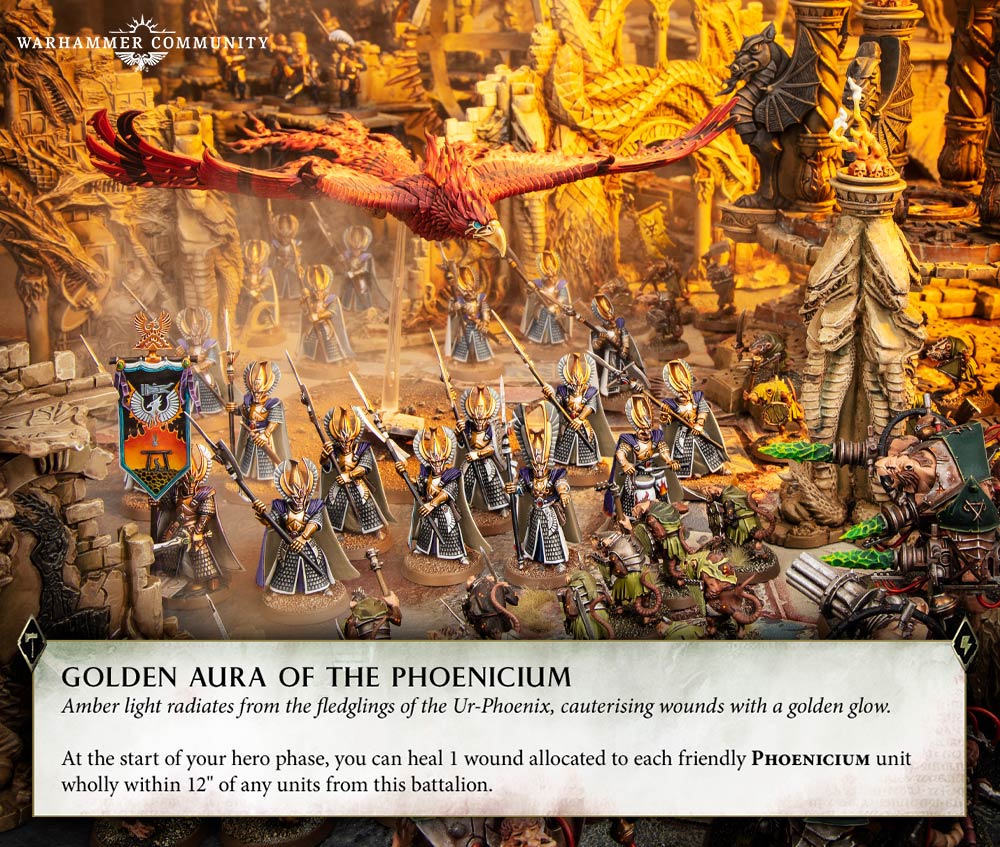 Whether you’re a die-hard collector of humans, aelves and duardin looking for new ways to use your collection, or you’re looking for your next army to be incredibly varied and rewarding to play and collect, Cities of Sigmar is shaping up to be an awesome battletome!

Make sure to pre-order your copy this weekend, and stay tuned for more previews later this week when we take a closer look at the lore…

← Art of War Ep 6.1 Justin Curtis Talks about Chaos Strategy
Chapter Tactics #131: How to Capitalize on the Best and Worst Tournament Terrain for Your 40k Army →