So far this week, we’ve had a thorough look at what Codex: Space Marines is all about, but what about the noble Ultramarines? Well, today is the day for the newly enhanced Varro Tigurius and his battle-brothers to step up to the fore, as we’re looking at everything that Codex Supplement: Ultramarines has to offer. Behold the mighty Scions of Guilliman…

The Ultramarines are a stalwart example of the unstoppable fighting force that their Primarch Roboute Guilliman envisioned when he wrote the Codex Astartes, to define how the Adeptus Astartes would wage war. Over the last 10,000 years, the Ultramarines have been an immovable bulwark against some of the greatest threats to Mankind’s existence.

So, we know that the Ultramarines are awesome (and blue), but the question is, how does their esteemed reputation translate to the tabletop? Well, you’ve already seen how their Chapter Tactics work,* but their codex supplement offers a whole new layer of awesome abilities, Warlord Traits, Relics and psychic powers that can give them the edge they deserve in any battlefield situation. Let’s take a look at some of the perks that come with being one of Guilliman’s chosen sons (other than being the only loyalist Chapter able to show off in front of their gene-father).** 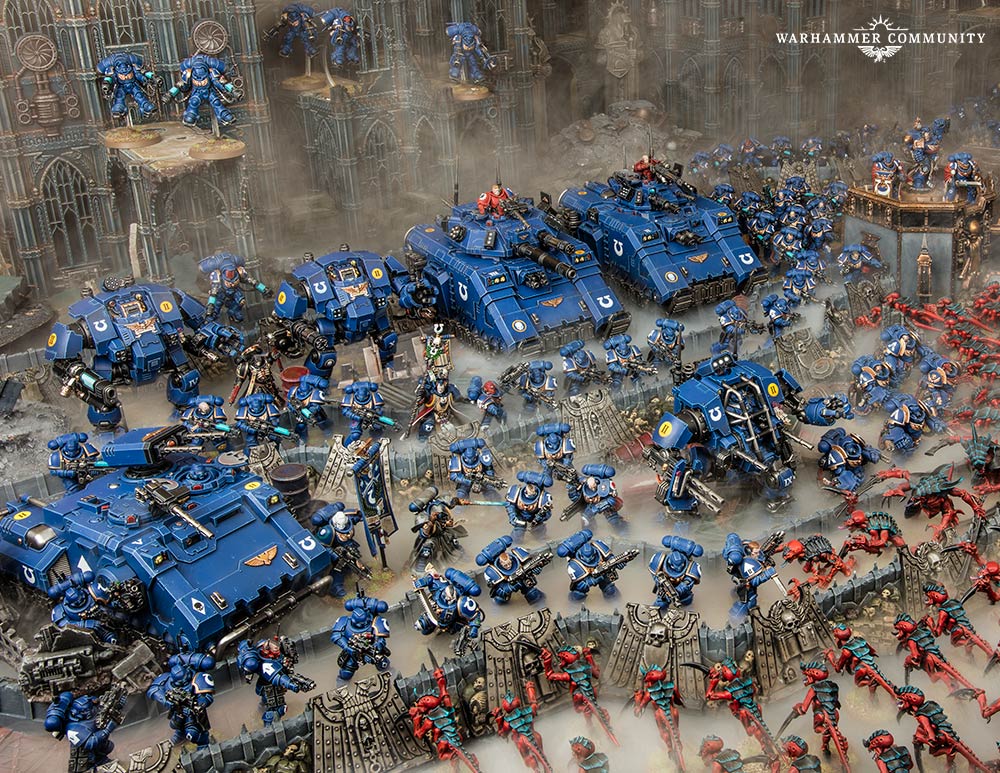 If you read yesterday’s article on the new rules and units featured in Codex: Space Marines, you’ll know how the Combat Doctrines work. Well, such is the tactical mastery of the Ultramarines that they receive an additional benefit when the Tactical Doctrine is active – a handy advantage when moving squads or Vehicles armed with heavy weapons, and it also works well in conjunction with Bolter Discipline. 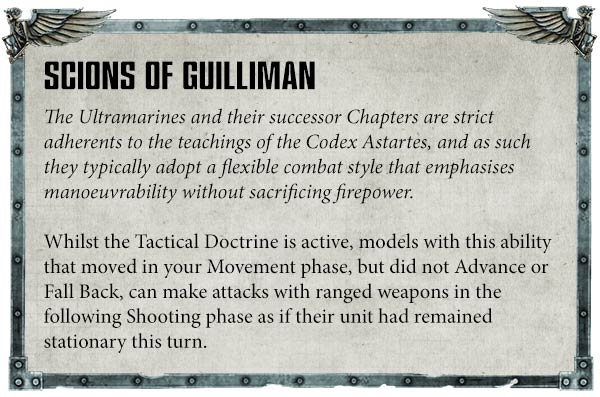 As you would expect of such a storied Chapter, the lords of Ultramar are peerless battlefield commanders, able to read the ebb and flow of battle at a glance before instantly formulating a plan to turn the tide in their favour. To this end, Codex Supplement: Ultramarines includes a set of six Warlord Traits that exemplify the strategic brilliance of the Chapter’s officers. Master of Strategy, for example, enables an accompanying unit to take advantage of the Tactical Doctrine (which, as we’ve seen above, is even better for purging bad guys).

Ultramarines Librarians will also have access to a bespoke psychic discipline that represents their indomitable mental fortitude – the aptly named Indomitus discipline. In fact, they’re so formidable in this area that they can slay their enemies through sheer willpower alone – after all, mind bullets are so last millennium! 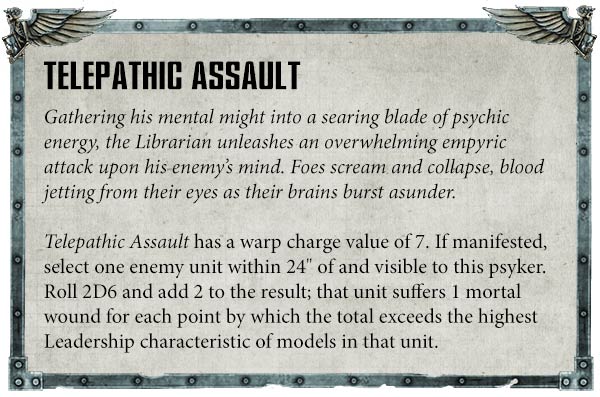 With more than 10 millennia of war under its belt, the Ultramarines Chapter has a vast collection of battle honours, artefacts and relics of war. Within the armouries of the Fortress of Hera, the formidable mountain stronghold of the Ultramarines, there lies a number of priceless weapons and artificer wargear that can be bestowed upon a worthy commander.

You can therefore choose to give your Ultramarines Characters a Relic of Macragge instead of one from Codex: Space Marines. One such heirloom is known as the Sanctic Halo, and it offers its bearer unrivalled protection against harm – both physical and eldritch (hint: it’s basically an iron halo… BUT BETTER!). 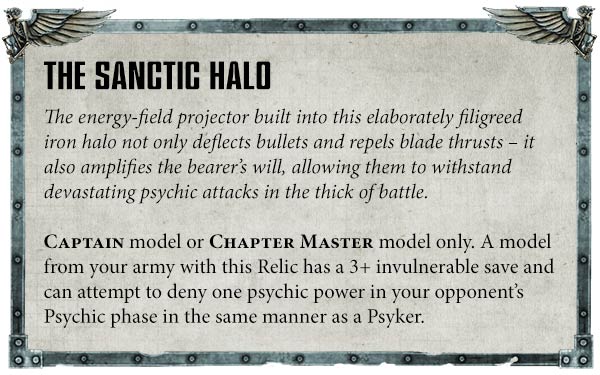 There is also a large selection of Special-issue Wargear – these serve as alternative Chapter Relics and can be given to Characters for the Ultramarines, or one of their (many) successor Chapters.*** Check out the Sunwrath Pistol, for example, which is essentially a permanently supercharged pistol and then some! 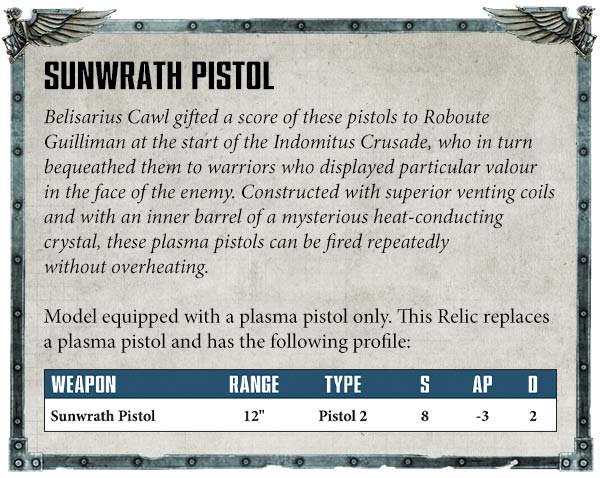 As exemplars of strategy, it seems only right that the Ultramarines would have access to a bunch of Stratagems that reflect their mastery of war. Well, the codex supplement offers another 16 Stratagems to choose from that are unique to the Ultramarines and can be used in addition to those found in Codex: Space Marines. One of the most devastating is Tactical Expertise. It may only be usable once per battle, but it can affect your ENTIRE ARMY! When used at the right moment (just like an Ultramarines commander would – no pressure…), it can be a real game changer. 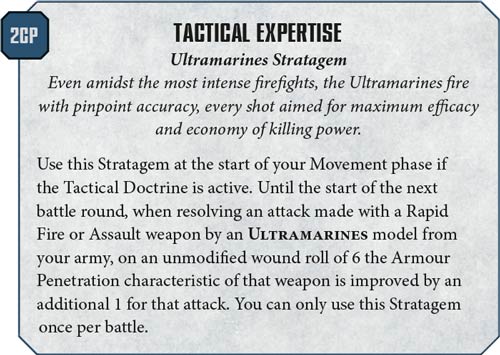 Believe it or not, there’s loads more in the codex supplement that we haven’t covered yet – including Ultramarines-specific Tactical Objectives, the awesome background section complete with detailed Chapter Organisation and even an Ultramarines name generator!**** There are also a number of bespoke Ultramarines datasheets, from the noble Captain Sicarius of the 2nd Company to power axe-wielding Honour Guard and even their glorious Primarch and Lord-Commander of the Imperium, Roboute Guilliman. 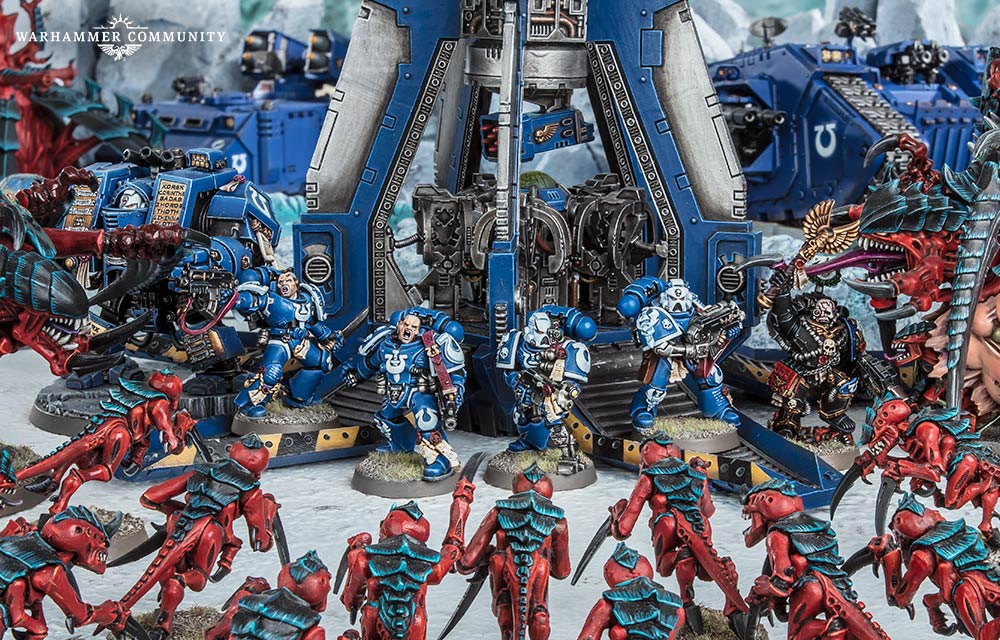 Long-term Ultramarines fans will also welcome the return of Tyrannic War Veterans as a dedicated unit. They’ll make a wonderfully thematic addition to any army that includes Chaplain Cassius (after all, he formed their order). They certainly live up to their names too – check out their Bane of Tyranids ability.

We promised yesterday that we’d take a look at Chief Librarian Tigurius, as he’s now crossed the Rubicon Primaris and emerged more powerful than ever. Well, that time has come! 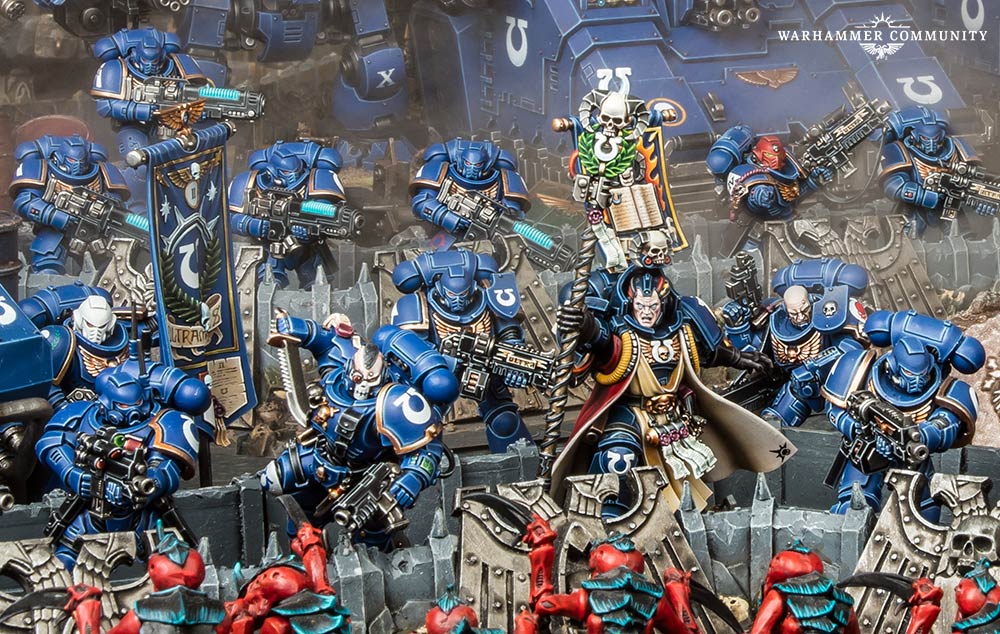 As befits his new status as a Primaris Marine, Varro Tigurius has an improved profile, complete with an extra Attack, as well as another Wound provided by his Belisarian Furnace implant.

The legendary Hood of Hellfire that Tigurius wears has also been improved. In addition to offering a re-roll when taking Psychic tests, it now offers a bonus to Deny the Witch and Psychic tests. The combination of a +1 bonus and the option to re-roll will mean that even the psychic powers with the highest warp charge values will be straightforward for the Chief Librarian to manifest.

As before, Tigurius can guide the actions of his battle-brothers with his otherworldly foresight to protect them from harm.

With all of the powerful new rules and units available to them, the Sons of Guilliman are set to re-enter the Era Indomitus with renewed vigour. Remember that you can pre-order Codex: Space Marines and Codex Supplement: Ultramarines this weekend. If you’re after some formidable psychic support for your Ultramarines army, be sure to pre-order the beautiful new miniature of Chief Librarian Tigurius too. In the meantime, why not pick up the glorious leaders of the Chapter – Roboute Guilliman and Marneus Calgar? Not only are they both incredible models, but they just so happen to be two of the most powerful Characters in Warhammer 40,000 – just saying! Check back with us tomorrow, too, where we’ll be honouring the Sons of the Great Khan with Codex Supplement: White Scars.

* As you’d expect, they’re one of the most tactically flexible armies in the game.

** By which we of course mean GAIN ALL THE RE-ROLLS!

*** Seriously, most of the successor Chapters are of Ultramarines genetic stock! It apparently has something to do with their gene-seed better standing the test of time and remaining free from mutation. But, as any other First Founding Chapter will tell you, such things are trivial details…

**** Such as Maximus – always a classic! The trick is then to come up with a suitable suffix for your Character or squad leader, like Brother-Sergeant Maximus Orsumness…