You are here: Home › Age of Sigmar › News › Battletome: Fyreslayers – The Big Changes

Battletome: Fyreslayers is on pre-order this weekend – your essential guide to Grimnir’s blazing duardin warriors. Part warrior-monks, part mercenaries, the Fyreslayers have proven a popular faction for Warhammer Age of Sigmar fans, and with loads of awesome rules in their new battletome, they’re about to get even better… 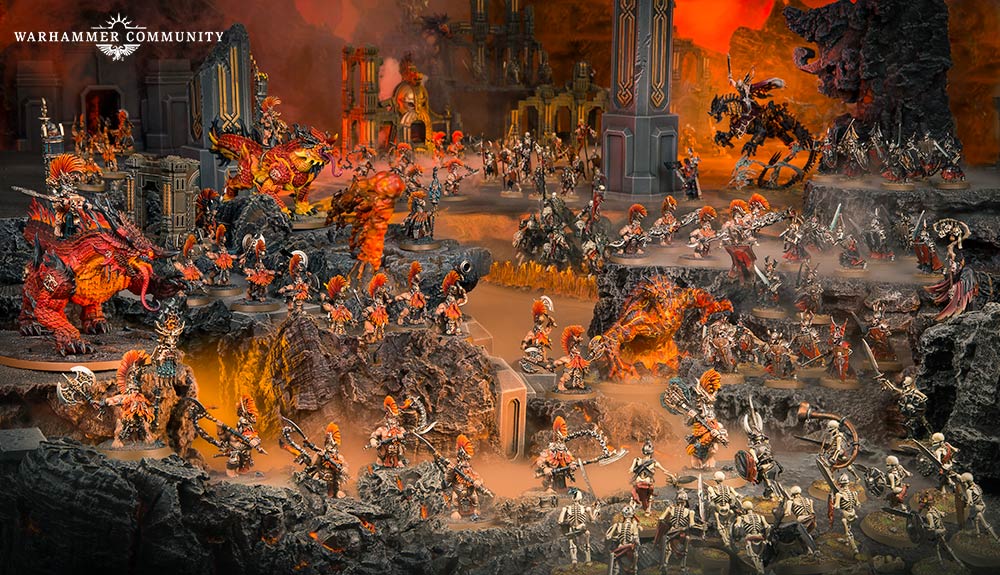 First up, we’ve got the core allegiance ability for Fyreslayers – their ur-gold runes! When you play Fyreslayers, every turn, you pick a different rune, each providing a different benefit to your army and allowing you to shift your tactics. These are very similar to their previous incarnation, with one significant adjustment to the Rune of Farsight, which now gives fyresteel throwing axes – ranged weapons wielded by pretty much every Fyreslayers unit – an additional +1 to hit and, if you’re fortunate enough to activate the enhanced effect, +1 to wound.

This gives you some excellent firepower (or should that be fyrepower?) and is perfect for softening up the opposition early on in the game or clearing far-flung foes off objectives in the later stages.

All Fyred Up for Battle

Fyreslayers armies are built around a core trio of units – battle-hungry Vulkite Berzerkers, magma-spitting Auric Hearthguard and indomitable Hearthguard Berzerkers. All three of these units have become considerably more dangerous in the new battletome, not least because of a significant boost to their durability. 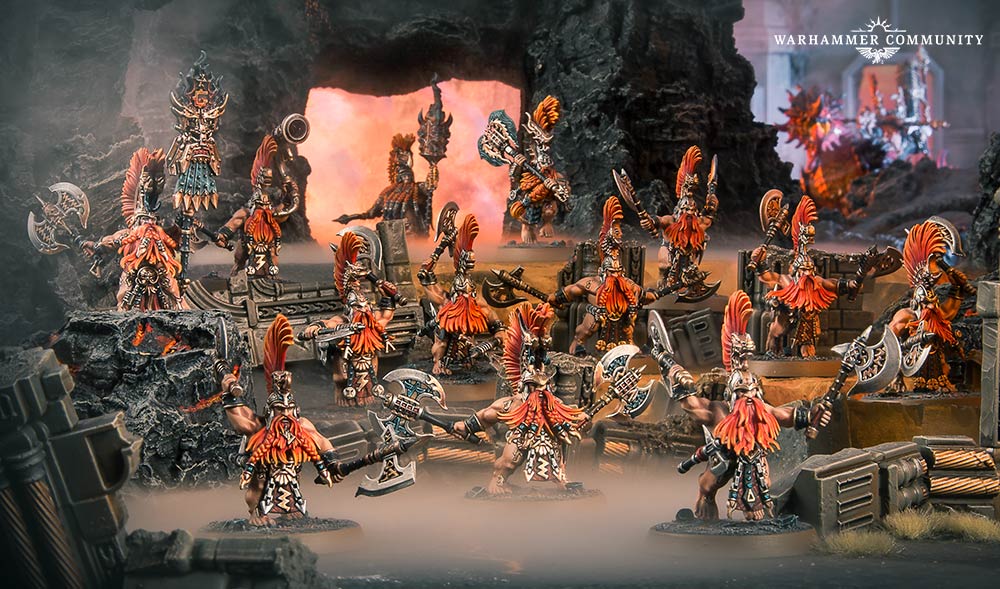 In the lore, Fyreslayers are tough. We mean really, really tough – you don’t run around the Mortal Realms clad in little but jewellry and a mohawk without being pretty durable, after all! To represent this on the tabletop, ALL of the core infantry of the Fyreslayers have been given an additional Wound on their profile! 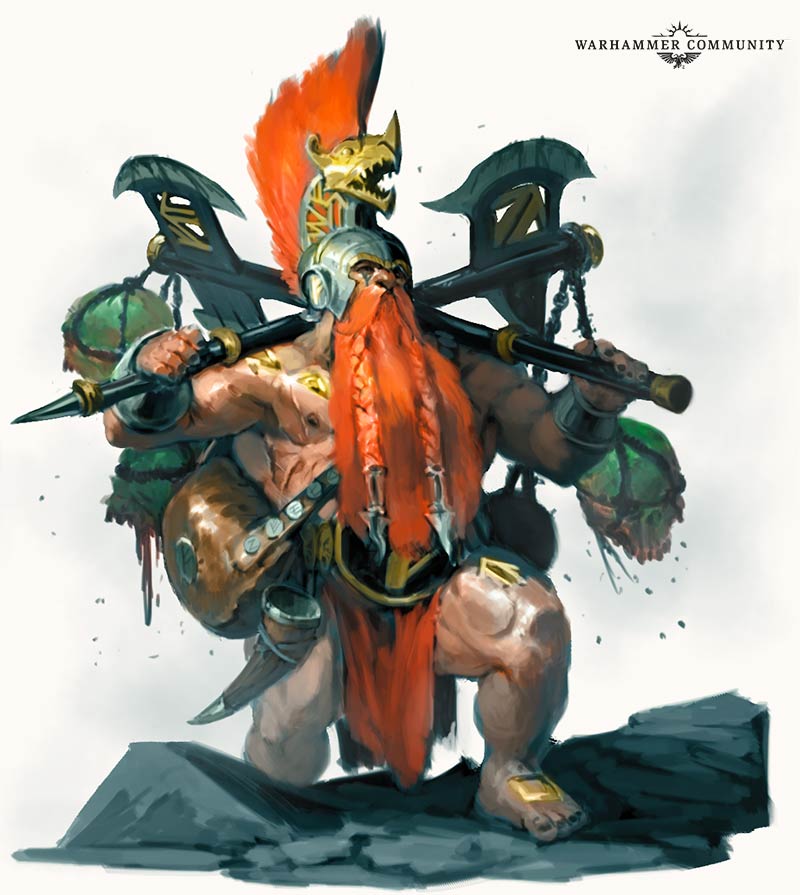 Each of the Fyreslayers’ core infantry units has also received improvements to core rules on their warscrolls. Vulkite Berzerkers, for instance, can now attack even if they’re slain, making them great for dealing with your deadliest enemies.

The Auric Hearthguard, on the other hand, are even better at slaying monsters than before, gaining a nifty damage bonus combined with a nasty penalty to the Move characteristic and rolls to hit their chosen prey.

Lastly, Hearthguard Berzerkers have been given additional attacks, significantly increasing their offensive power and making them a superb unit with which to hammer your foe.

Every Fyreslayers army using the new battletome is going to want to include at least one Auric Runesmiter or Auric Runemaster, thanks to the Zharrgrim Blessings. This is a table of prayers available to any Fyreslayers Priest, offering them a range of powerful abilities that can augment your units or confound those of your enemies. Prayer of Grimnir’s Fury is particularly cool, allowing you to drive your chosen Hero to greater heights of glory by letting them attack again.

Another incredibly useful option is the Prayer of Ash, which is perfect for sheltering a shieldwall of Vulkite Berzerkers – or a particularly valuable Runefather on Magmadroth. 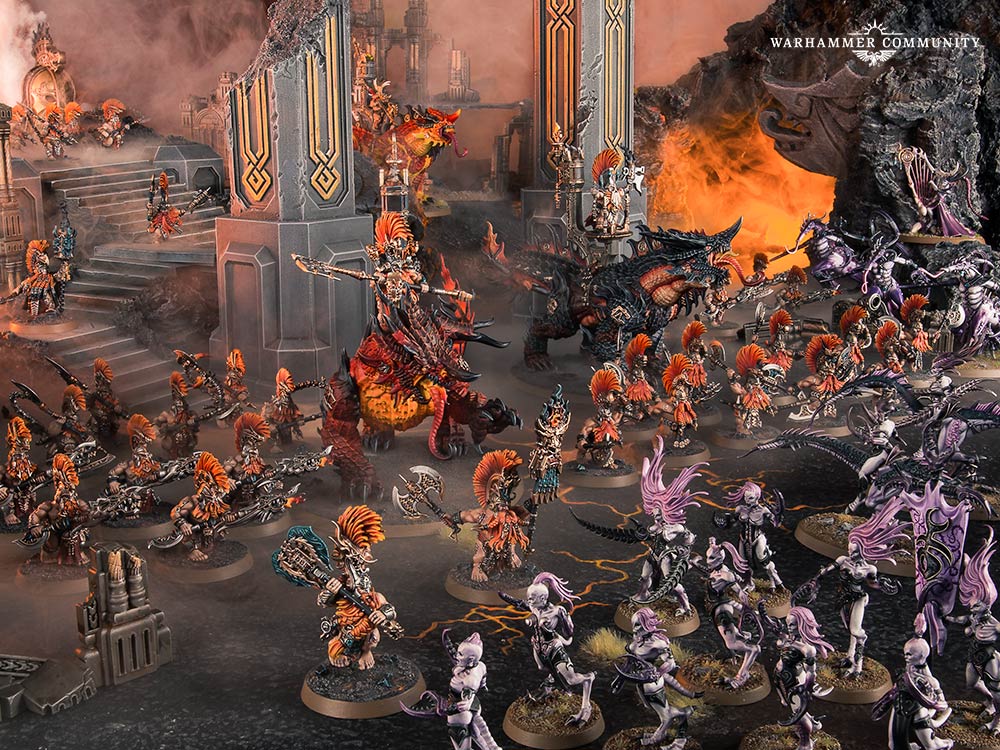 Battletome: Fyreslayers gives you more choice when customising your favourite Heroes than ever before. The book contains two tables of command traits, four tables of artefacts, and even a set of mount traits for Magmadroths. These can be used to create some awesome combos; for example, an Auric Runefather with Blood of the Berzerker, Drakeslayer and the Flame-scale Youngblood mount trait makes for an explosive combatant with the potential to deal a devastating number of mortal wounds. 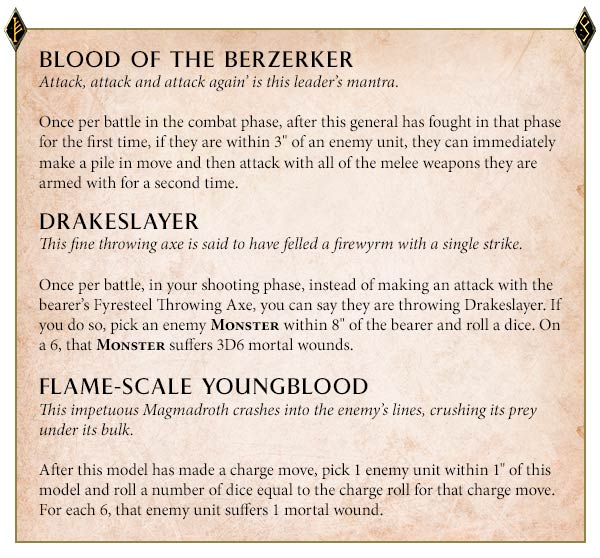 Or how about an Auric Runesmiter Ash-beard, the Droth-helm, and the Ash-horn Ancient mount trait? This makes for the perfect leader for a spearhead of crushing Magmadroths. 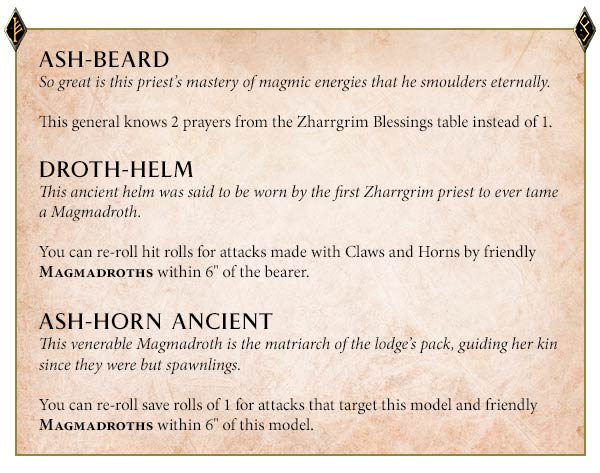 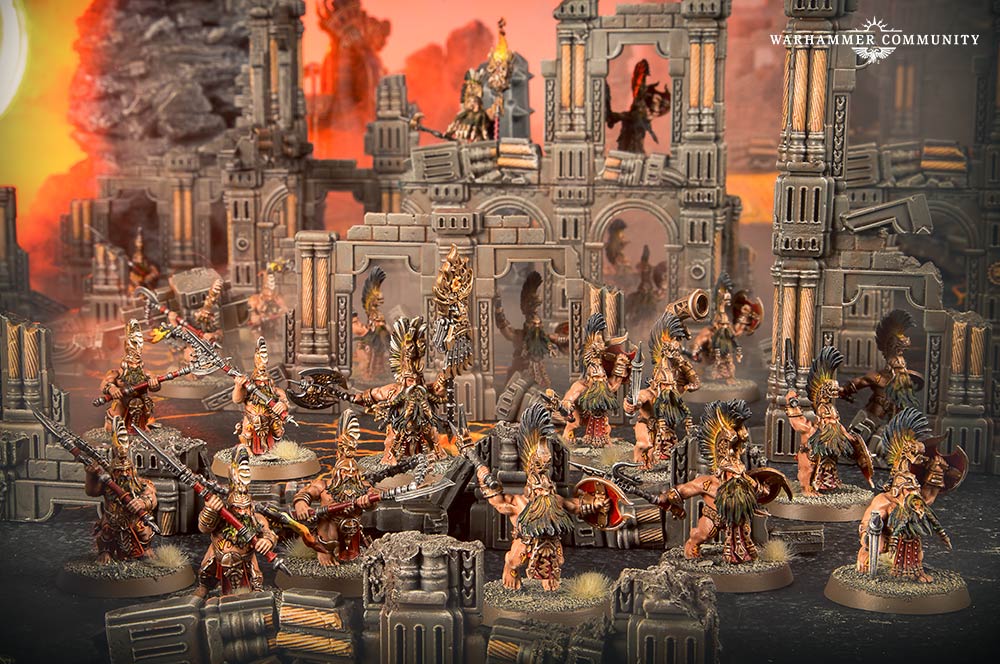 One of the most exciting changes to the Fyreslayers is the addition of lodges. These represent sub-factions of Fyreslayers from the background of the Age of Sigmar that are famed for particular tactics, all the while serving to reward some more unusual list-building choices. Chosen at the army creation stage, each lodge has an ability, command ability, warlord trait, and artefact of power. The Greyfyrd are able to take additional artefacts, and their Heroes can attack simultaneously – for maximum valour, we’d recommend using a cluster of artefact-armed Grimwrath Berzerkers. 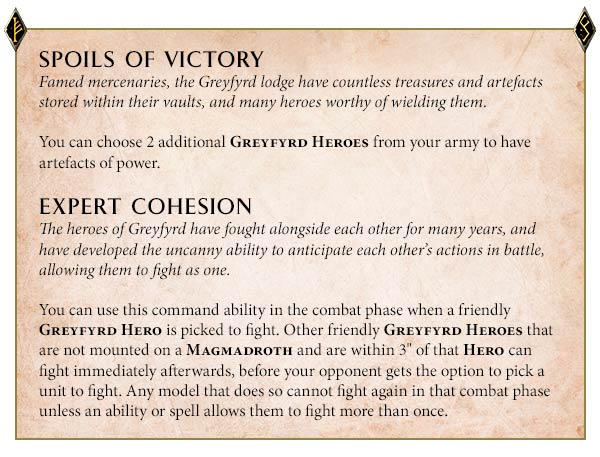 Lofnir, on the other hand, are a Fyreslayer Lodge from Ghur. As befits warriors from the Realm of Beasts, the Fyreslayers of Lofnir are famed for their Magmadroths. This is represented in-game by a rule which lets them take more Magmadroths than other armies, as well as allowing you to take a Magmadroth trait for each.

That’s all we’re revealing for now – but keep checking back! We’ve got more lore, previews and rules from Battletome: Fyreslayers all throughout this week. In the meantime, if the flames of your passion have been ignited, why not grab Start Collecting! Fyreslayers today?

← In the Finest Hour Episode 19: Analyzing Missions Series #2, ETC
Which Imperial Assassin is the Best? →