Charlie here from 40kDiceRolls, back again to discuss a T’au commander, Shas’O R’myr. As always, for more tactics articles, check out the Tactics Corner! 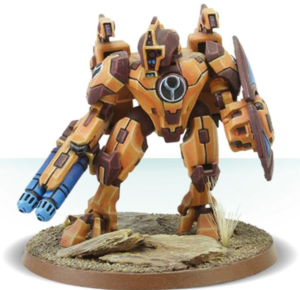 Working under Shadowsun in the 3rd Sphere Expansion, Shas’O R’myr quickly rose through the ranks of the T’au Empire command. He is responsible for many of the individual victories on T’ros, a frontier world originally held by the Imperium, as well as the final battle that resulted in the T’au Empire claimed that world completely for their own. It is during this war that the Imperium sent an agent to try and assassinate R’myr. Though he personally escaped unscathed, his mentor the Ethereal Aun’Vre (not to be confused with Aun’Va) was killed during the attack. This has consumed the T’au commander and his rage and vengeance grow every day. 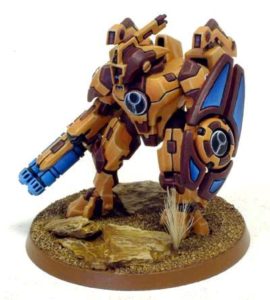 R’Myr is armed with a double-barreled plasma rifle (24″ Rapid Fire 2 S6 Ap-3 D1 and a mini fletchette pod. The pod has both a shooting (6″ Assault D6 S4 AP0 D1) and melee (S4 AP0 D1 and make two to-hit rolls for every attack made with this weapon) profile. He has no optional wargear.

If you’ve never even heard of R’Myr, that’s ok. He’s a fairly old model (his crisis boosters are glued together in front and back halves as opposed to the newer suits that attach via pins) and extremely fringe due to the fact that he’s ForgeWorld with lackluster rules. He did not change points in CA2018. Let’s start with the positives: he comes with a standard 4++ invulnerable save which is nice. On standard Commanders, you have to use one of their slots for this, but this more than balances out since R’Myr doesn’t have any sort of customization or slots of his own though. Still, 4++ is better than not having an invulnerable save. If you routinely play against Astra Militarum, his Vengeance special rule will come up often. Even if you do, it’s not THAT ground-breaking since R’Myr already hits on 2’s with shooting attacks. This increase of ~83% accuracy to 97% accuracy is, of course, nice, but it won’t always be applicable. Furthermore, he will only have 2-4 shots if you’re anywhere outside of 6″ range so even when you benefit from this, it will, on average, only change an occasional miss of Plasma to a hit.

And this is where we start going downhill for poor R’Myr. The weaponry he has, double-barrel plasma, is really not ideal. T’au Plasma is at a very weird overall state and just flat out worse than Imperial plasma, due to the fact that it cannot overcharge and is S6 Ap-3 D1. It really lacks the flexibility of standard plasma and at S6 and D1, just doesn’t do what you need it to do. The much better choice is a Cyclic Ion Blaster (S7 Ap-1 D1 or S8 AP-1 D[D3]) but sadly, that isn’t available to R’Myr due to lack of wargear customizations.

Another mark against him is that his Fletchette pod will require you to be right in your opponent’s face in order to take advantage of. At 6″ range and variable D6 shots, it’s not consistent, nor do you want to be in range to use it that often as you will surely be counter-charged the following turn. It turns out, though, that the melee profile of the Flechette pod ends up giving R’Myr the most close-combat attacks of any other T’au unit at 8. Hitting on 3’s is really not bad overall even at S4 AP0 and D1 fo clear through some chaff, but you’re paying a premium for that middling close-combat presence, much more than other armies pay for far better melee capabilities. Like all the melee T’au units, it feels more like a gimmick than a legitimate alternative way to play. This is compounded by the fact that R’Myr is Dal’yth sept which rewards stationary units. A melee-attempting R’Myr will not be able to stay still long enough to take advantage of the sept tenet and it just feels very clunky. It seems like he would be much more at home in a V’iorla or FSE sept, but I’m sure that would make some neckbeard fluff-masters angry so that’s a “no-go”.

Really though, the biggest reason you won’t want to take R’Myr is not any of the above, it’s the fact that you can only take one <Commander> per detachment and there are far, far better options than a Rambo R’Myr. Shadowsun, 4xCIB XV8, Cold Fusion, all are miles ahead of choosing R’Myr so you should never really use him. This is unfortunate because like several of the T’au’s FW choices, it leaves R’Myr feeling like more of an afterthought than an honest attempt at writing fun but strong rules. When/if T’au FW index rules ever get updated to a codex, we can only hope more thought will be put into R’Myr’s rules (as well as many other’s) because that’s the real problem – not his point cost.

If you find yourself on the other side of the table form Shas’O R’Myr, first, thank your opponent for not taking any of the better Commander choices. Buy them a beer and know it’s going to be a fun game. If your opponent tries to keep him more at the edge of his range, know that it will fail to make its points back against most lists. The movement is not anything to write home about and the only little “trick” to look for is the Dal’yth sept stratagem to shoot and then immediately move as if the movement phase. This will allow R’Myr to “move-shoot-move” like in 7th edition. It’s handy but it’s just one Dal’yth unit per turn so definitely not game-breaking. If instead, they try for a closer approach, know that R’Myr will definitely be within charge range. If you have any dedicated (or otherwise) close combat units, they will make short work of him. Even non-dedicated close combat units will be able to make relatively short work of him.

Apparently, all it takes to become more accurate (re-roll 1’s To-Hit) is to get angry. I’m surprised more T’au haven’t figured that out and it’s just R’Myr still upset about his mentor’s death. Overall, R’Myr’s rules follow the suit that most T’au FW units can be grouped into – mainly that they seem underwhelming and not at all cohesive with the T’au Codex rules and units. This is unfortunate, as it leaves Shas’O R’Myr as a clearly sub-optimal choice. As such, I cannot recommend you ever take him. RIP R’Myr.

What would it take to convince you to use Shas’O R’Myr?

Not only is R’myr unimpressive, you could equip an xv85 commander identically (substituting a flamer for the flechettes) and it would have identical stats while being cheaper.

What you’re paying for is the extra chainsword-equivalent attacks and slightly improved invul in melee, and not needing the single markerlight on an IG unit you’d be targeting.

To answer the question at the end of the article:
Up the shield gen to 3++ all the time
Up the plasma to at least d2, maybe assault 4 as well
Change hatred to reroll to-wound
maybe give the flechettes ap-1, not 100% sure if it’d matter

Author
Charlie A.
Reply to  Dakkath

AND lower points, then I’d look at him somewhat seriously. In short, it would take a lot.

The IA: Xenos FAQ has changed his Upgraded Shield Generator to also give a 3++ against melee attacks, although that hardly redeems him. He’s still just flat-out bad.

The fact that he essentially comes with two of the worst weapon in the Tau arsenal is a huge failing. If his plasma had some kind of significant advantage (Dmg2? More shots?) that might be one thing, but he really has nothing going for him at all. Even the very minor rerolls against IG is all but wasted, since unlike Farsight he doesn’t give it to anyone else.

Thanks for pointing that out, I had definitely overlooked that. I’ll amend the article. But yeah…still bad.

If he had the Bork’an plasma relic (for free) or something, that would be nice. I’ve heard a couple of playtesters mention that, for CA2018, they looked at ***every single unit***. But based on the points staying the same for R’Myr, I find that hard to believe. Again, his points aren’t the real issue, though he is over-costed. When so many other things got a reduction, and he didn’t, it just adds to the narrative that a bunch of FW stuff is all but forgotten.

abusepuppy
Reply to  Charlie A.

Well, one thing to remember is while the playtesters make recommendations to GW, the company is under no obligation to follow those recommendations. It’s very possible that they did, in fact, suggest a significant drop in points for R’myr and GW simply decided it wasn’t worth the page count to update him.

That’s a good point to remember.

Think you could do, or have you done the tau ‘knight’ equivalent?
I’ve had a look it seems nice (even in cc) but I’d like your take on how effective it is, thanks guys

Do you mean the Tau’nar? Either Charlie or I will probably get around to it soon, but the short version would be that it is pretty good (if you take a lot of drones to support it), but extremely expensive and surprisingly vulnerable to melee.

Given that you can feature Commanders with up to 4 guns, and Rymyr has a single gun, I’d give his plasma rifle the following profile: Range 30″ Strength 7, AP:-3 Assault 6.

Author
Charlie A.
Reply to  Victor

I think flechette pods count as a “gun” 🙂

abusepuppy
Reply to  Charlie A.

It is, but it also really isn’t.

That’s a bummer, since I actually have him, and he’s a pretty cool Model.

Given its very small effect I consider it spittles rather than a gun. I don’t even know where the hell are the flechette pods mounted in its battlesuit