Hello, 40k armchair generals SaltyJohn from TFG Radio here to bring you a tactics article about the second most popular ranged Imperial Knight the Crusader. For more reviews, bat reps, tactics discussions, and analysis check out the Tactics Corner! 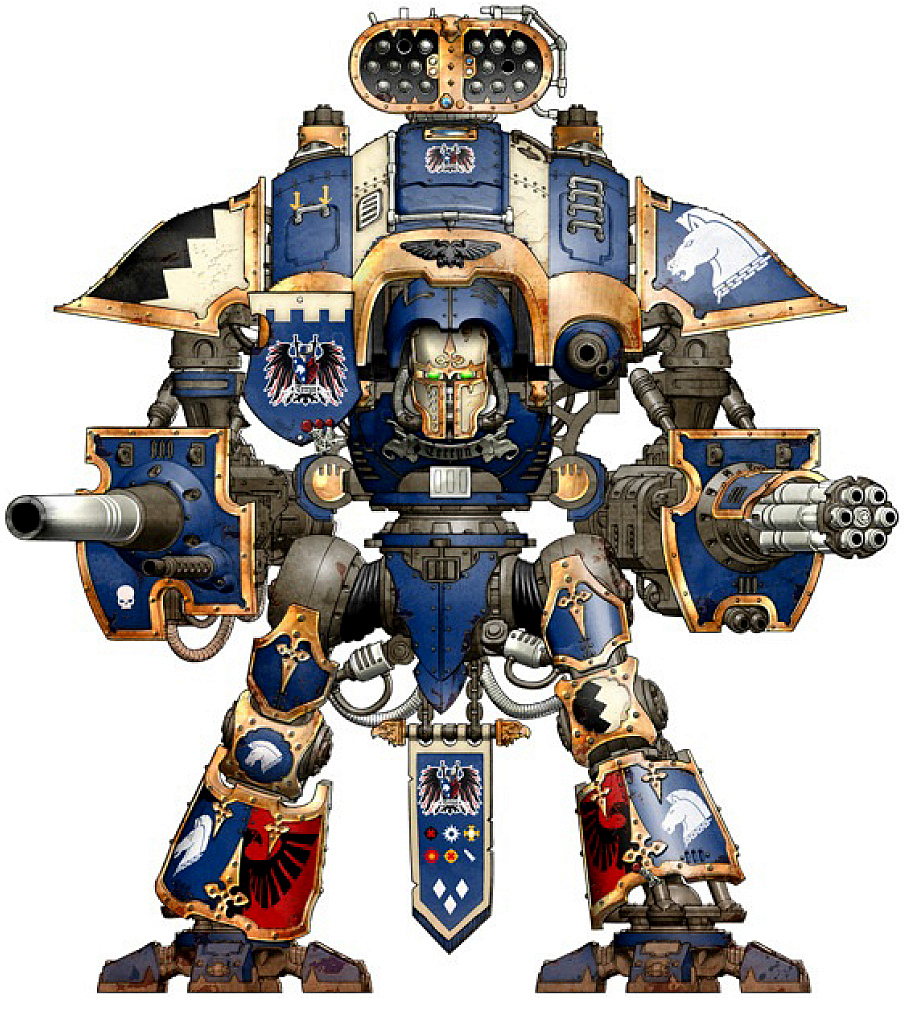 The Imperial Knights have been a solid choice for competitive 40k players since their codex dropped in June of 2018. While many of the Knight variants are solid choices a few stand out above the rest. The Castellan obviously comes to mind, as does the Gallant, but the Crusader may be the best shooting platform Knight point for point in the codex aside from the Castellan. With two highly effective ranged weapons, 1 additional ranged weapon over other variants, plus more stubbers and flamers, added to the ability to take a Carapace weapon as well means you can really get the damage output going. A decent Ballistic Skill coupled with the best standard Knight weapon in the game, the Avenger Gattling Cannon, means it is formidable before giving it Relics or Warlord Traits! My previous articles on the Castellan and Gallant.

Overview: The Imperial Knight Crusader is a great weapons platform. As I said it’s really second only to the Castellan in terms of sheer firepower. It is, however, better at wiping out hordes of basic infantry than the Castellan, especially if you also equip the Rapid-fire Battle Cannon and a complimentary Carapace weapon. In a list with a Castellan, the Crusader is a great complimentary unit. It is unlikely to get targeted, as your opponent will likely focus the Castellan or Gallant (you remembered to bring one of those too right?) first leaving it to shoot up the enemy until turn 3 at the least. The list I took to the Bay Area Open, and went undefeated taking second place, had a Castellan, 2 Gallants, and a Crusader with Rapid-fire Battle Cannon. 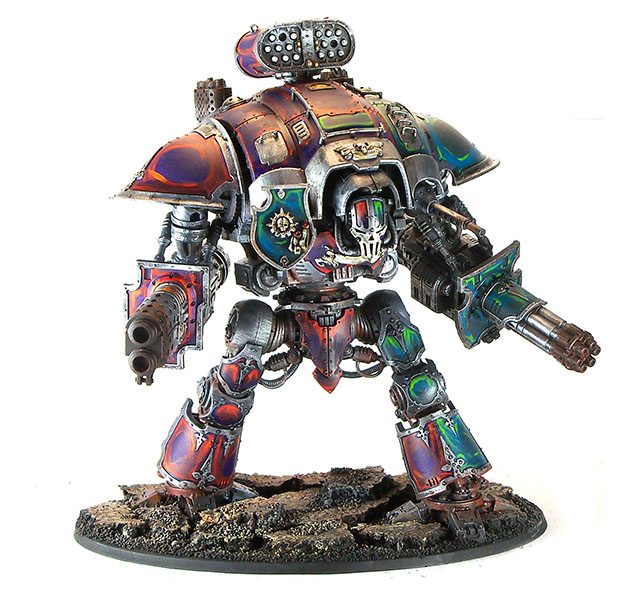 The work of the great Goatboy!

Tactics: The Crusader can put out a mean number of shots a turn. Just the Avenger Gattling Cannon alone gives you 12 S6 AP-2 D2 shots a turn hitting on 3+. Combined with Rapid-fire Battle Cannon with 2d6 S8 AP-2 D d3 shots a Heavy Flamer and 6 Heavy Stubber shots you can put the hurt on units large and small. Taking the Ironstorm Missile Pod or Stormspear Missile Pod is a good complimentary loadout for the Gattling Cannon/Battle Cannon Crusader. The Crusader really works best in an Imperial Knights army, in a Super Heavy detachment. It lacks the resiliency of the Castellan, and if it gets focused down and is dead by turn 2 it will not have been worth the points. To reap the best rewards of the unit it needs to continue slinging lead across the table top until turns 3/4 at least. 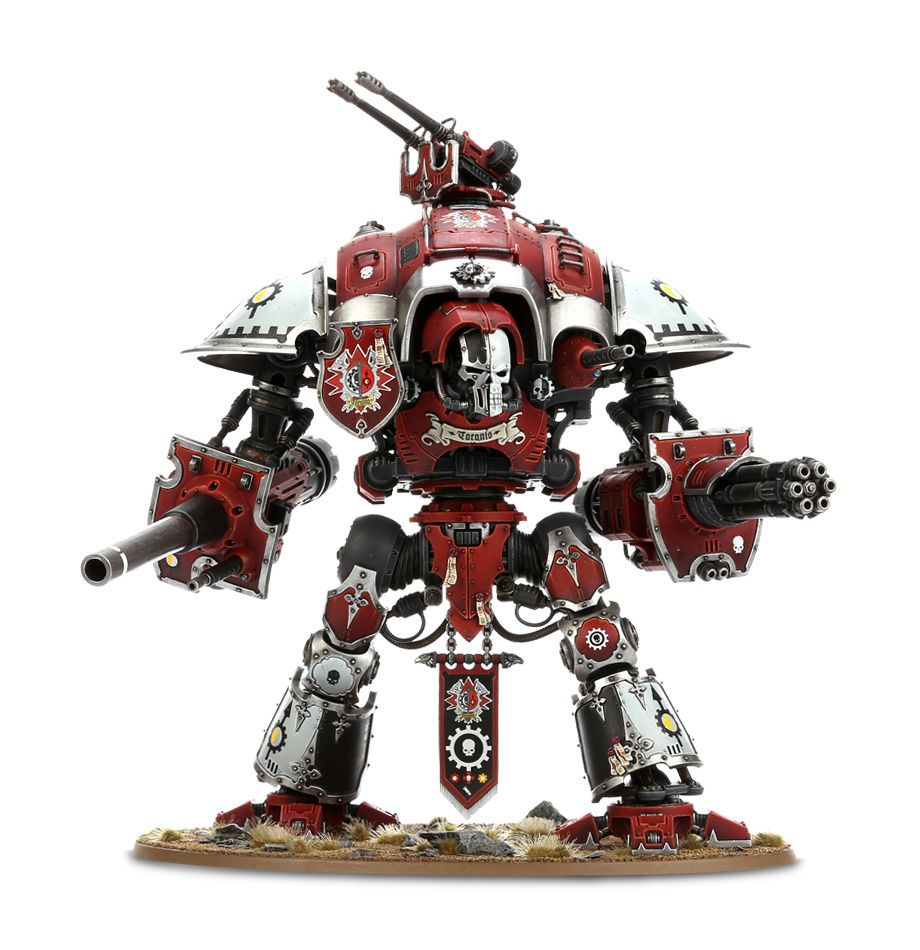 Taking the Crusader alongside a Castellan and a Gallant, perhaps some Armigers even instead of the Gallant, in a Super Heavy Detachment (SHD) is a great place to start. The Crusader needs the distraction of the Castellan and/or Gallant(s) to stay alive and do work. Another good bit of synergistic tactics is to take a detachment of something that is fast/can get in close to the enemy quickly that is a close combat threat. This way your opponent will more than likely choose to focus on the Castellan and whatever is in his/her face before they even think about the Crusader. By keeping the Crusader moving forward at a steady pace you can also follow up those combat elements with 12 Titanic Feet attacks hitting on 3+ in close combat. The ability to fall back out of combat, over enemy infantry, and then fire and charge is actually quite good on the Crusader. Just be sure you charge the right target for those Titanic Feet. A vehicle/monster the Crusader or Castellan softened up, or pretty much any enemy basic infantry are good assault targets for the Crusader.

Really good use of the Crusader is as a support element for the Castellan. What I mean is the Thermal Cannon (if you take it which I wouldn’t) and the Rapid-fire Battle Cannon (RFBC) are great at finishing off something the Castellan couldn’t. Perhaps you rolled poorly with the Volcano Lance or Plasma Decimator on your Castellan, well, if you have a Crusader in your list it’s quite likely you can still finish that target off. The best part about a Crusader in a properly built Super Heavy detachment is it doesn’t need any real help to be an effective part of the list. Unlike the Castellan which almost always needs a Warlord trait and probably the Relic plasma decimator to truly shine, and unlike the Gallant which probably should have Landstrider and/or the 2+ armor save relic, the Crusader can hold it’s own in the army stock. Even House Hold Traditions aren’t a concern for it.

If you’re running House Raven, or House Terryn, depending on the play style you have for your SHD the Crusader benefits from both. If you’re House Raven the ability to Advance and fire is great for keeping up with the Gallants or repositioning to fire at important targets. With House Terryn the rolling an extra d6 and dropping the lowest for charge distance is great! Remember to use the Crusader in combat when you can. If you are running House Terryn the House Terryn Relic Battle Cannon “Thunder of Volorus” could be a good choice to give the Crusader depending on the matchup. At S9 with more shots on average than the standard RFBC, because you roll 3d6 for the number of shots and discard the lowest, it is more effective against high toughness targets like other Knights than the standard. Another relic you might consider, again situationally, is the “Endless Fury” which replaces Avenger Gattling Cannon with a better one! Instead of 12 shots, it has 14 and all unmodified to hit rolls of 6 count as 2 hits instead of 1. If there are a lot of 2 wound models with decent armor saves in the enemy army you may want to consider this weapon. It is a standard relic so no House Tradition or Mechanicum alignment required.

Here is a short doubleheader battle report using my Knight list including my Crusader.

If you plan to run an Imperial Knight Super Heavy Detachment with a Castellan I really suggest you try out a Crusader as a compliment to it. I think you’ll be happy with the results.

There is another way to run the Crusader. Crusaders can’t ever actually match the damage output of CAWLS_WRATH because 2d6 str9,-4,flat 3 rerolling all 1s is the best shooting profile in the game.

But a KRAST crusader with HEADSMAN’S_MARK can almost mathhammer keep up with the castellan against TITANIC targets. Headsman’s mark gives +1 damage to 10+ wound targets and +2 damage to TITANIC targets. This means every failed save from the gatler is actually doing 4 damage against another knight (getting 2 failed saves through out of 12 shots is mathhammer plausible). And if your opponent doesn’t bring any 10+ wound models, the relic gatling gun is always a winner against elite infantry blobs. And if you are facing a horde list, you can even swap over to the reroll 1s to hit WLT in place of the 4++ ion shield.

I was pretty close to swapping out my castellan for my crusader just because of its improved CP efficiency on ROTATE_SHIELDS and flexibility in dealing with elite deepstrike list matchups. It ends up being 523 points versus 593/604. If I could find 70 points of admech that could make up the spread in firepower from losing CAWLS_WRATH I would swap it down.