Hey everyone, Danny from TFG Radio here again, and while I’m loving the new Ork stuff, let’s talk about the bestest bugs in the galaxy. If you want more tactics and tricks, check out that Tactics Corner. Do you want an insurance policy for Swarmlord and/or one of our hardest hitting infantry units? If yes, then Tyrant Guard are there to die for you, but die gloriously. 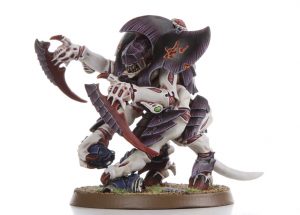 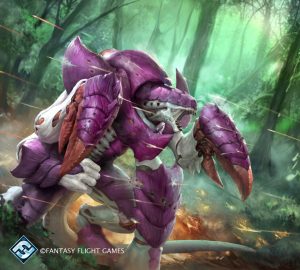 The meat-shields are still here, and as shooting is far more lethal, they are far more valuable.  The Tyrant Guard’s stats haven’t changed that much except for an additional wound and an inch increase in movement speed. Their max unit size also increased to 6, so you can take essentially 18 ablative wounds for a Hive Tyrant (really, Swarmlord).  That is pretty sweet since it more than doubles the effective wounds of our Hive Tyrants, and while Shield Wall isn’t as awesome as say T’au Savior Protocols on Drones, there is a benefit here.  Why this is awesome is that you get all the defensive benefits of the Hive Tyrant (like Toughness 7, a 4++, and perhaps even a Catalyst or Warlord trait save) before you shunt off the damage inflicted.  If you can get a Tyrant or Swarmlord with all the defensive buffs up, those wounds are pretty hard to generate, and being able to shunt 83% of them off to a Tyrant Guard just makes them incredibly handy.  The game is just brutal at range, and the Swarmlord’s biggest weakness is the fact that he can be shot to death turn 1 by a lot, I mean a lot, of different armies, so Tyrant Guard become an essential tool in making sure Swarmy gets at least one turn to do its trick.  Especially now that the Swarmlord is 50 points cheaper, it is a lot more manageable to fit in a unit of Tyrant Guard or even take just 1 in a Auxiliary detachment.

The Tyrant Guard are also the hardest hitting infantry that Tyranids have.  Genestealers are the best melee infantry by far, but Tyrant Guard bring something rarefied: high-quality attacks.  TG get access to crushing claws, making them S10, AP-3 Dmg D3 with 3 attacks a piece.  That is about as hard hitting as our infantry get, and that is actually more punch than just about any monstrous creature that doesn’t have crushing claws.   They are also WS 3+, so they are hitting on 4s, which is certainly better than the 5s of an unbuffed Carnifex or Tervigon.  Even without a Hive Tyrant to babysit, a big unit of TG with Crushing Claws becomes a real anti-armor threat albeit at a big cost.  They can never get rid of their Rending Claws, so they also always have a more accurate swing for lighter targets.  If a Tyrant dies near them, they go up to 4 attacks a piece, which again makes them just about mini-carnifexes that are Infantry, so they can actually go up stairs! 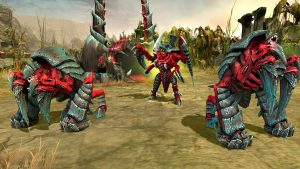 Hive Fleet can matter here, but really, it depends on what they are doing, probably protecting Swarmlord.  This means that they are going to be whatever Swarmy is, probably Kraken, which actually isn’t terrible.  Getting good advance rolls is important to ensure that each TG is within 3 of their leader-bean as it is easy for them to get outpaced.  Leviathan is actually quite fun as the trait gets to apply twice.  The Tyrant gets the 6+ Feel No Pain against the initial damage, and then the Tyrant Guard get to use it on the mortal wounds they suffer for taking the wound.  Hydra is not so great as they are rarely going to outnumber their target, but if you are using TG as stealth anti-armor tek, it can actually help them stick those 4+s to hit.  Gorgon is also not bad for the anti-armor unit as with S10, rerolling 1s becomes pretty clutch.  Kronos does not really help much as they are too slow to get to the middle of the board fast and they don’t shoot at all.  Jormungandr is nice for essentially a 2+ save on them to shooting, which smart players will often do to eliminate them before putting the real high-value shooting on the Tyrant. Jormungandr also opens up fun deployment trick as Tyrant Guard are infantry units. Behemoth can certainly help with a reroll charge, especially when coupled with adrenal glands (like charging out of reserves).

The downside is that Tyrant Guards get too expensive if you start to take their upgrades, and really, if they are in combat, you are likely to lose your Tyrant anyway unless it was something that the Tyrant could handle as is.   With the minimum squad size increase of 3, you have to invest over a 100 points, which can start to add up when you start throwing in the cost of a Tyrant (or again, Swarmy).  A full unit of Armor-Killers is 300 points, more than a full unit of Hive Guard with Impaler Cannons, and well, Tyrant Guard need to get there first, so you are spending points on a delivery system like a Tyrannocyte/Jormgunandr trick or using Swarmlord’s ability and maybe Onslaught to get them there.  That’s a lot of resources to a unit that at is going to produce 18 S10 attacks, hitting on 4+.  To math it out a bit, a full unit of Hydra TG with claws is going to do 11.2 wounds to a Knight and will likely mostly die to the swing back.  That’s not ideal at all.  Even if you are taking them as just insurance, you are spending a lot of points to keep Swarmy alive for 1 turn, and that 120 points is 30 Termagants.  The only way around this is to take 1 or 2 in an incomplete squad in an Auxiliary detachment, but that’s -1 CP and a detachment, but I do it, and it works well enough. Again, now that Swarmy is cheaper, you can actually just use your old list and if you have a spare detachment, throw in a Tyrant Guard for Swarmy.

Still, if you are going to take a Hive Tyrant (read: Swarmlord), these bugs are pretty damn useful.  They are one-dimensional, and you are certainly paying points just to keep one model alive or absorb enemy firepower, but then, that could be enough if your army hinges on it.

72/100. An essential unit if you are building around Swarmlord, but one-dimensional.  Tyrant Guard can be a key to victory, so they are good, but they also can be an expensive piece of dead weight in some cases. Thanks as always for reading, and keep on gathering that bio-mass.

70/100 looks extremely generous with the Tyrant Guard. Right now, I think they have a place in the top 10 worst options in the game.

They’re slow (slower than the Tyrants they are supposed to protect), die extremely fast (no invulnerable, mediocre defensive stats), not that many wounds and not so relevant armour), low cc power (low quantity of attacks, choosing beetwen low accuracy or low power). All of that relative to a 37+ point cost.

Don’t protect your Hive Tyrants with a Tyrant Guard, just take another one, as guard units are almost as expensive as the things they’re protecting, and lack everything but a few not-so-cheap extra wounds. Your opponent will just shoot to the guards before looking at the Tyrant, and they die a lot faster.

The only place where you can look for guards is with the Swarmlord, you will spend a LOT of resources on hive commander, but at least it can work, as you can only take one Swarmlord, and the ability is good enough to have an impact on the game.

^I’m inclined to agree. Honestly if you need to use Tyrant Guard to protect Swarmlord from getting Alpha Struck turn 1, you’re probably playing on a pretty crappy table with no LoS blocking terrain. He’s survivable enough with venomthropes for -1 to hit/4++ invuln vs shooting and bubble wrap unless the opponent has all the earth shaker batteries/basilisks/manticores.

I’d only start running TG if they got a SIGNIFICANT points drop in CA.

What Brakhal said. I’d rate Tyrant Guard at ~30/100. They’ve been shite since the 5th ed codex when you could at least use them to make a decent deathstar. They do one thing, and do it bad. These days you’re force to take the full 3 models too, no MSU single model shenanigans like Sean Nayden used in his Lictorshame.