GW brings us info on the new Orks! Get pumped for a WAAAGH!!!

This week, we’ve been taking a good look at Speed Freeks – the new game of vehicular combat in the 41st Millennium and a great place to start collecting your Speedwaaagh! This set features two new Ork vehicles, with no fewer than FOUR more on the way, all of which have rules both for Speed Freeks and Warhammer 40,000.

Today, we’re taking a look at the latter to help you choose which ones you add to your army, as well as exploring the new Speed Freeks keyword…

Speed Freeks is a new keyword in Codex: Orks shared by all the new Ork vehicles and other Orks who feel the call of the Speedwaaagh!, like Deffkoptas and Warbikers. In the lore, Orks have always been known for their love of speed, and this keyword lets you represent that with special rules and Stratagems designed just for you. Take Billowing Exhaust Clouds – a great give one of your new Ork vehicles a nifty durability boost: 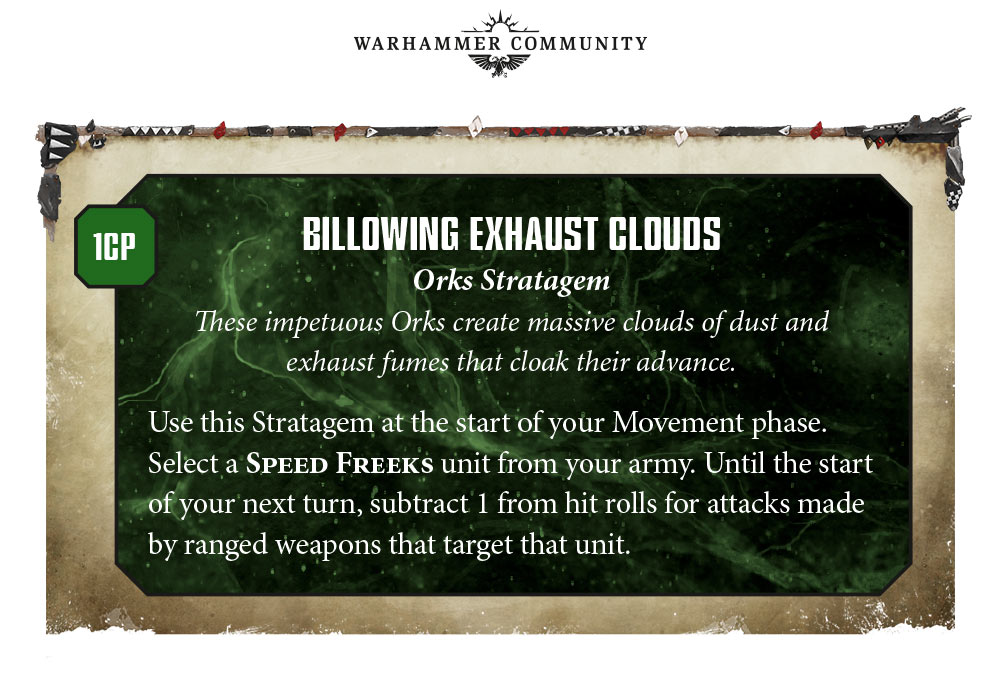 The lynchpin of any good Ork vehicle army in the new codex is the Deffkilla Wartrike.

This vehicle is an HQ choice that allows any nearby vehicles and bikers to charge even after they’ve Advanced, letting you close the distance on your enemy with terrifying speed before smashing them to bits in close combat.

This ability works on ANY Orks in the same Clan with the Vehicle or Biker keyword, meaning you’ll be able to use it with your Trukks, Battlewagons, Deff Dreads or, if you’re feeling particularly brutal, Stompas!

The Megatrakk Scrapjet is a truly vicious Ork vehicle, excelling at scrapping enemy tanks or turning foes into coleslaw with its drill. Designed by enterprising Meks from downed Dakkajets and piloted by grounded Flyboyz, these vehicles are just as deadly as their aerial counterparts. Just check out the rokkit kannon:

And that’s just ONE of the guns – this vehicle is loaded with deadly firepower. With Dakka! Dakka! Dakka! – which lets Orks generate additional hits when they roll an unmodified 6 – this has the potential to scrap even tougher tanks in a single round of shooting. Should anyone survive – well, just ram them with the nose drill:

On raw number of shots alone, few come close to the Boomdakka Snazzwagon. Between a team of bottle-wielding Burna Boyz, a big shoota and the deadly Mek speshul, this is your dedicated Infantry-killer:

Don’t worry about having to choose between firing your burna bottles or other guns – the Boomdakka Snazzwagon has a special rule that lets you use both in the same shooting phase.

This vehicle is also one of the best defensively, thanks to its Billowing Fumes rule:

Even when destroyed, the Boomdakka Snazzwagon can still cause havoc, thanks to its high likelihood of exploding – just make sure yours is deep in enemy lines when it does so…

If you can’t solve a problem with a Squig, it probably isn’t worth solving. The Rukkatrukk Squigbuggy is the most versatile of the new Ork vehicles, capable of changing its firing profile to accommodate for a variety of different targets. Need to chew through some Terminators? Lob a bitey squig at them. What about tanks? A boom squig should do the trick: 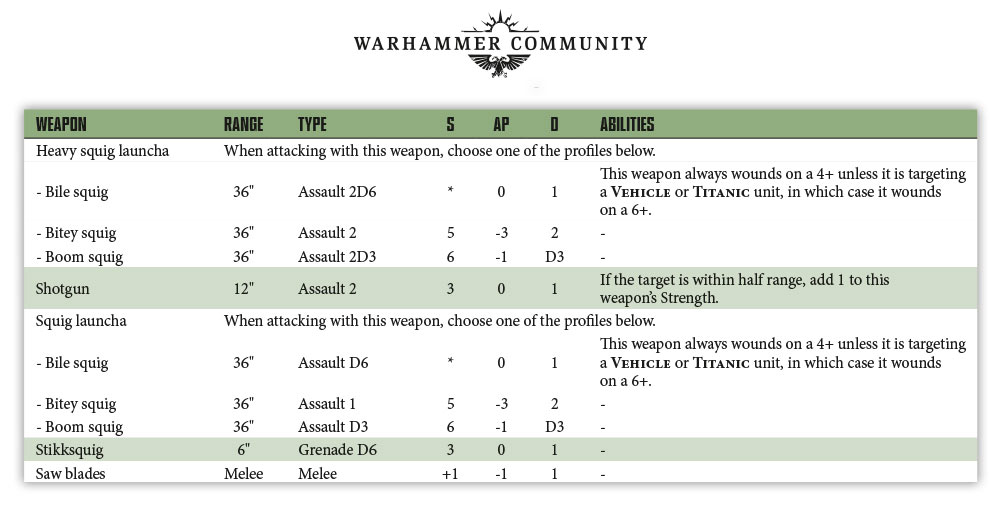 What’s more, you’ll be able to use a squig mine to threaten anyone that gets close! Dealing mortal wounds to anyone unfortunate enough to tread on it, by using multiple Rukkatrukk Squigbuggies, you’ll be able to set up some deadly traps. 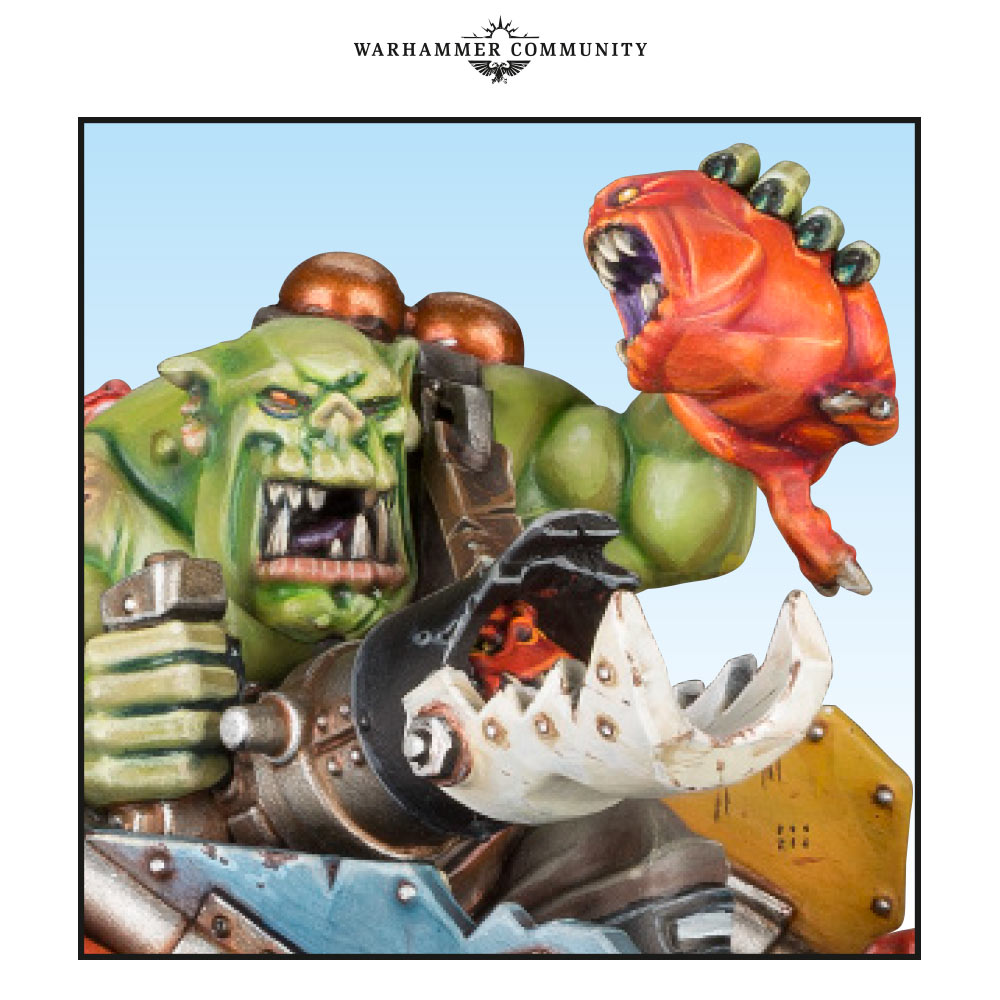 The Kustom Boosta-blasta is a fantastic all-rounder, effective at any range and pretty solid against anything you throw it at. If you’ve got a gap in your Ork list, fill it with one of these – they’re flexible enough that to help in just about any situation. Take the guns – you’re armed with four infantry-immolating burna exhausts for close range AND a hefty rivet kannon for picking off foes further away:

Of course, you can just use it to ram people too.

The Shokkjump Dragsta is the most unusual of the new Ork vehicles. For one, it’s – dare we say it – almost accurate by Orky standards, thanks to its paired Grot Gunner and Targetin’ Squig. You’ll be reliably hitting with the kustom shokk rifle on a 3+!

Where the Shokkjump Dragsta really shines is its incredible (if unpredictable) mobility. Roll a 4+ on your Advance roll, and it’ll teleport to another spot of your choice on the board, making it perfect for last-minute objective grabs or getting into position for a crucial shot.

Every single one of these new vehicles opens up countless possibilities when building your lists – and they’re very, very fun to use, too. And we haven’t even got into combining them with Clan Kulturs…

The Speed Freeks boxed game, which you can pre-order it from Saturday, allows you to build one Kustom Boosta-blasta and one Shokkjump Dragsta, as well as six Warbikers. The rest of the vehicles we’ve mentioned will all be available as separate kits alongside the long-awaited launch of Codex: Orks, so keep an eye out! In the meantime, let us know which one you’re looking forward to most on the Warhammer 40,000 Facebook page.