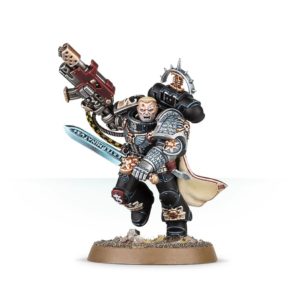 Watch Captain Artemis is a Deathwatch Watch Captain who has some potent firepower thanks to his two unique ranged weapons; Hellfire Extremis and the Stasis Bomb. He costs 130 pts.

I would give Watch Captain Artemis the Situational rating. He has a good statline and some strong ranged weapons, but his price tag is simply too high for him to be an efficient addition to a Deathwatch army. For the same cost, you can take a Watch Master, who arguably brings a lot more to the army and is a better all-round character.

Armed with a Power Sword, he can hold his own in combat against T4 opponents with no strong invulnerable save. Hitting on a re-rollable 2+, you can count on hitting with all four attacks, so will kill about 2 Marines a Fight phase on average. Not the most impressive combat ability for a Captain. The lack of a strength or damage bonus on Artemis means he won’t really be able to go toe to toe with any tough opponents or characters.

Artemis does get a bit of a durability boost through getting a 6+ feel no pain-type save. However, with only a 1 in 6 chance of blocking a wound, it can’t be counted on to come up all that often in a game, but will be useful when it does happen to keep him alive a bit longer. 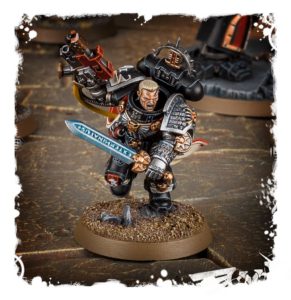 Watch Captain Artemis also gets Hellfire Extremis. This is a combi-flamer that always wounds on a 2+. This is a pretty good flamer, allowing you to potentially do some damage to opponents that have weak armour saves. It is also useful in overwatch, hitting automatically and wounding on a 2+. In any other army, this would be a nice bonus on the standard combi-weapon, however, Deathwatch are one army that does not suffer from a lack of weaponry that wounds on a 2+, with just about every Bolt weapon in the army able to wound on a 2+.

The Stasis Grenade is another matter. At close range, Artemis can launch the grenade, hitting on a 2+ re-rollable in most cases. The ability to do D6 mortal wounds to an enemy unit could be very strong if you roll high enough on the damage table (always worth keeping a command point re-roll spare to improve your odds). If the shot does miss, however, it is Artemis that will take mortal wounds. This shouldn’t be an issue in most cases, but will be a problem if your opponent has any negative to hit modifiers on the unit, especially if they can be declared after the target is chosen (such as in the case of Lightning Fast Reflexes).

Artemis can also help out with nearby Deathwatch units, giving nearby units re-rolls of 1’s to hit thanks to the Rites of Battle special rule. This can boost the damage output of nearby units. 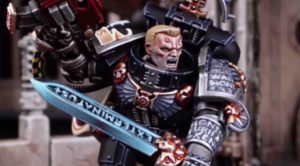 I think the best use of Watch Captain Artemis is to put him in a transport vehicle and head for a big threat in the enemy army. If you are not using the Stasis Grenade to target a key unit in your opponent’s force, why are you taking Artemis? He would do well accompanied by a unit of combat Veterans, who could be tooled up to deal with a range of threats. In combination with the Stasis Grenade, a few Thunder Hammers should put the hurt on a single enemy unit or vehicle.

In general though, you probably aren’t going to be taking Watch Captain Artemis all that often. A Watch Captain with Combi-Flamer and Power Sword comes in at 90 pts. Artemis gets a 6+ save, a boost on the Combi-Flamer, and the Stasis Grenade. For me, that is not worth the extra 40 pts Artemis pays on top. Maybe if the Stasis Grenade could be used every turn. If Artemis was in the 100-110 pts range, he might be worth it. However, once he has used his one trick in the Stasis Grenade, he does not have much going for him. For the same cost, I would much rather go with the Watch Master in almost every situation.

Like so many Special Characters, he’d also be much more worth taking if he had a Jump Pack or something. GW seems to really like making close-ranged Characters who need to walk across the board or catch a ride, neither of which has really been a viable proposition for quite some time.

Some form of mobility option would help him out significantly. He’s a great model, but just not worth taking as himself in most situations.