Hey everyone, Reecius here again with another Space Wolves Codex review! In part 1 we covered their Special Rules, this time we’ll be looking at the Relics of the Fang. Be sure to check the Tactics Corner for more great reviews.

The Sons of Russ are here, awooooo! Let’s take a look at what they have to offer. And remember, you can get all of these items at a nice discount from Frontline Gaming in our web-cart with FREE shipping for orders $99 and up!

The Space Wolves have some very solid Relics, some of which are strand-outs. 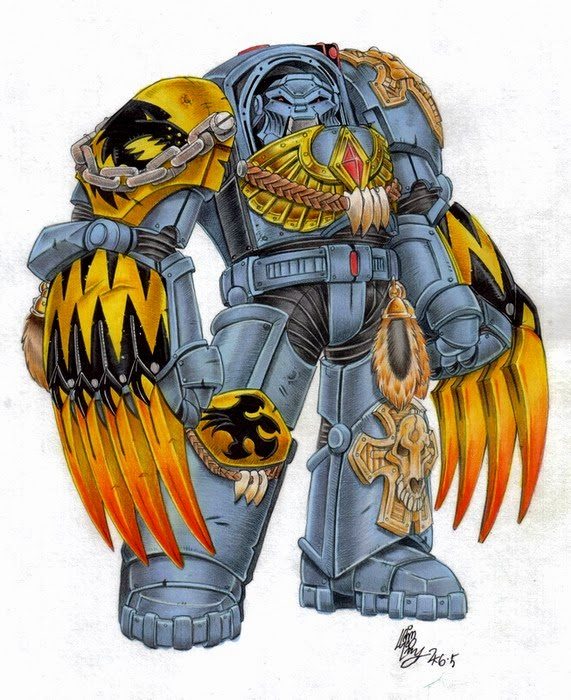 Relics of the Fang

Hope you enjoyed this review! We’ll back back soon with more Space Wolf articles!

Man, the Helm of Durfast got nerfed hard. Even leaving aside the various ways the changes in the system have hurt it (Ignores Cover is less powerful, etc.), losing the ability to also Re-Roll CC Attacks knocks it way down. More like the Helm of Derp-fast now.

I can see using any of the rest, tho, at least in fluffier Lists, and like you say, the Armour of Russ and the Wulfen Stone are great.

Yeah, the helm really is of limited use, unfortunately.

I really, really dislike the fact that all of the melee weapons do only one damage, which means they are only useful if you’re trying to take out basic troop models. Being practically useless against vehicles, monsters, and enemy HQs is an incredibly bad place to be for a melee army, and it means that SW are 100% reliant on Thunder Hammers (admittedly a really good weapon) for all of their HQs.

Seems like because that because they gave all of the special characters multiple damage weapons (except Canis) they ran out when it got to the relics!

They are not exceptional melee weapons, I agree. However, what you will see is a Thunder Hammer on most heavy hitting melee characters, per usual.

I agree though, it would have been cool to have even a D3 damage weapons to really stand out.

Toss the Armor of Russ on a Land Raider Excelsior and enjoy your well defended dad tank.

Hi Reece, great to see you writing articles for Marines again, whatever their colour. So I am already grateful.

I think you made a little mistake i.e. forget something. The Krakenbone sword has an implemented re-roll to wound. You probably meant to say it hence the comparison with wold claws, but it’s missing.

I generally thought that the SW relics are really lackluster. Probably among the weakest relics from all the codex books. I cannot fathom any reason atm which make you wanna take/spend cp on other stuff than the Wulfenstone or the Armor of Russ.

Btw: I’m totally looking forward to thursday so we can finally see your Astartes list you brought for the nova invitational. Can you give us a hint? 😉

The Helm of Durfast could be cool on the Forgeworld Chaplain Venerable Dreadnought. Can Space Wolves thake those?