This Week in the ITC: New Missions, New Meta.

Well this week in the ITC, really it’s been two because I was on vacation last week and didn’t write an article, has seen quite a few changes in the ITC but few of them are in the rankings. I am speaking, of course, about the two Meta shifts. First is the shift to deal with Imperial Knights is well underway, and the second is the new ITC Missions! Before we jump full bore into that though let’s run through a few of the standings. 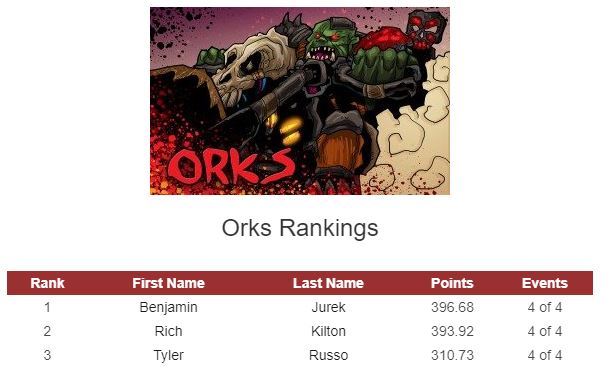 With Orktober around the corner, how is this going to shake up before the end of the 2018 ITC Season!? 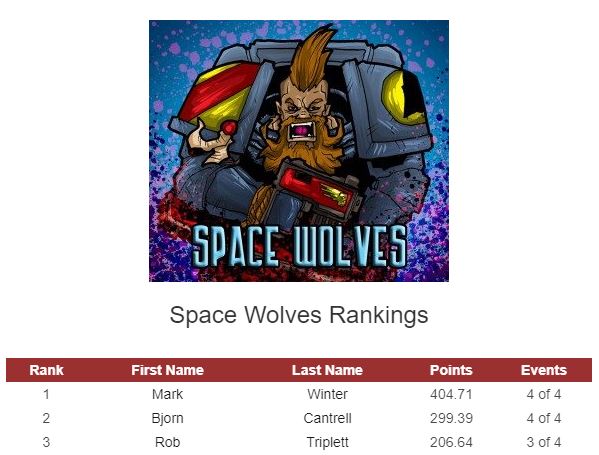 Space Wolves go up for pre-order very soon. Doesn’t look like we’re getting a Leman Russ, but if enough of their non-Marine units have teeth they could make a splash. 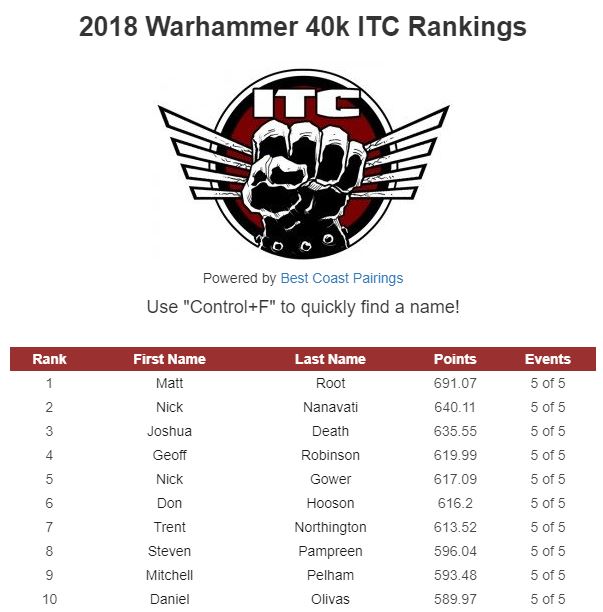 So like I said there really wasn’t a lot of movement in the past few weeks. A couple of the bigger events from the last weekend have yet to show up in the scores and there are a couple GT level events this coming weekend with some of the bigger names attending, so that will be fun to see play out. So, the meta in the ITC.  The first big thing is the adjustments still being made to deal with Imperial Knights, and the adjustments being made by Knight players to try and find the best builds and stay a bit ahead of the curve. Despite all the internet hate and love for the Knights+BA Smash Captain Battalion+AM CP Battery that list continues to underwhelm. While it might really trounce low-midtier players not prepared for it, it simply cannot survive run-ins with Knight lists that are more Knight heavy. It also has the same Achilles heel as all the other IK lists. Dhrukhari and Harlequin haywire spam and the Aeldari airforce based lists. Really the IK/BA/AM list fairs far worse against those anti-knight lists than does an IK/AM list. Nids are struggling very hard in the meta now, as are Necrons. While it’s still quite possible to see a Necron player take a 3 round RTT it is becoming increasingly clear that Necrons and Tyranids need some love in the next Chapter Approved or they’re likely to be relegated, once again, to the shelves of many a gamer closet. Imperial Knights are definitely a bit more than a “gatekeeper” army, they can be a real contender, but everyone must now ask themselves how they deal with a list that could potentially have a Castellan and 2 Gallants in it. That is really what is putting the hurt on Necrons and Tyranids competitively. They have a hard time effectively dealing with Knight heavy armies, which really are quite common, and also having the tools in their belt to handle other common lists. 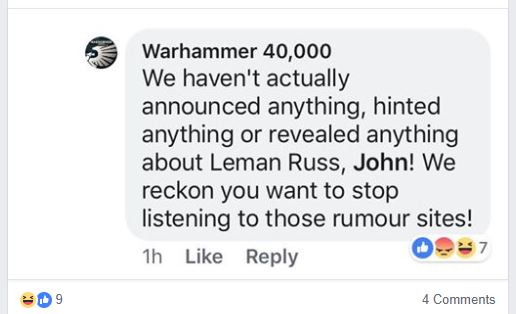 The next big shakeup in the meta isn’t going to come from the introduction of Leman Russ unfortunately. No, I’m not bitter, you’re bitter. What is going to shake up the meta in a big, and healthy, way is the new ITC Missions that were released last Thursday! Some of the biggest changes came in the form of the Secondary missions. 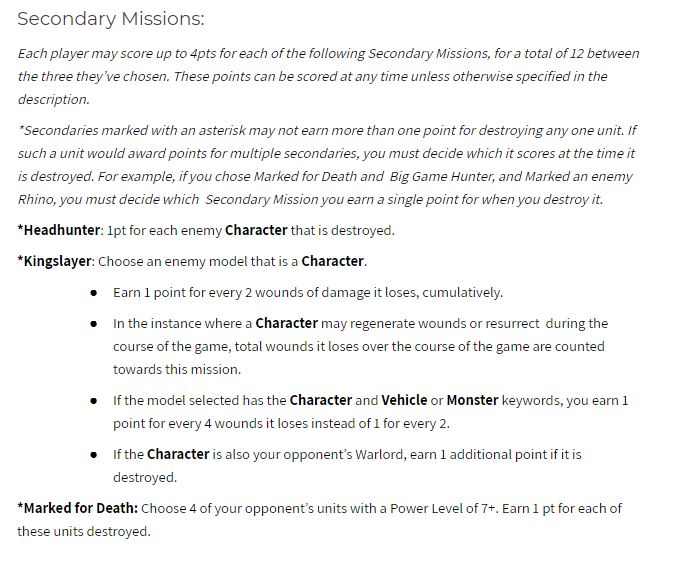 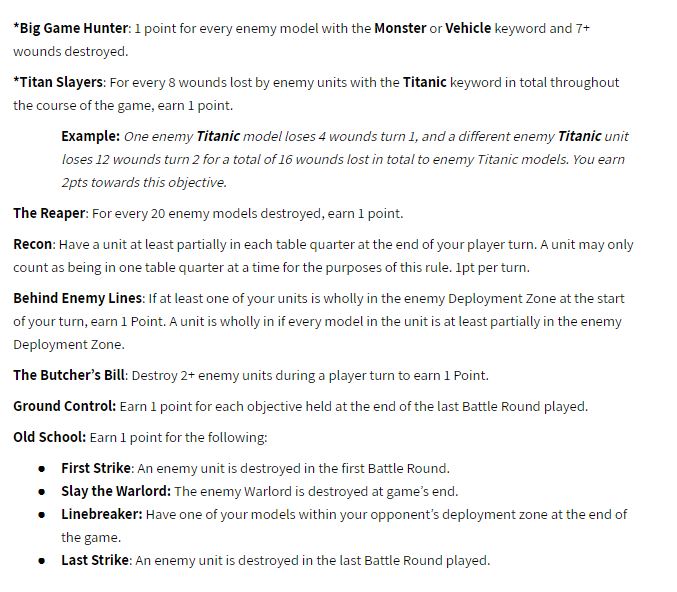 First things first, pay attention to what is going on with the secondaries marked with an asterisk. I don’t think I need to run through that, as it is clearly worded, but make sure you know it! The change to Reaper is big. No more taking units with 9, or 19, models just to get around giving up Reaper points, but it’s also harder to get as it’s 1 point per 20 models destroyed. The next big meta shifter is the change to Big Game Hunter. Changing it to models with Monster or Vehicle 7+ wounds, rather than 10, is a big shift. Now a lot of models that used to get around BGH like the Carnifex, C’tan, Epidemius, Dreadknight, Daemon Prince, Dreads, and Guilliman. That’s by no means the whole tally of units now open to you when you choose Big Game Hunter. The new auto-take secondary for most lists is going to go from Old School to Butcher’s Bill. Most armies are designed to kill 2 or more enemy units a turn already. It will probably take a few weeks, say until right before So Cal Open, for all the new meta shifts from these missions to percolate through into most of the top-mid tier players.

The next big shift is a change to the Primary Missions. Notably, Scenario 4 changed significantly from having two objectives only to now having 5. 1 Objective goes in the middle of the table then two player placed objectives. 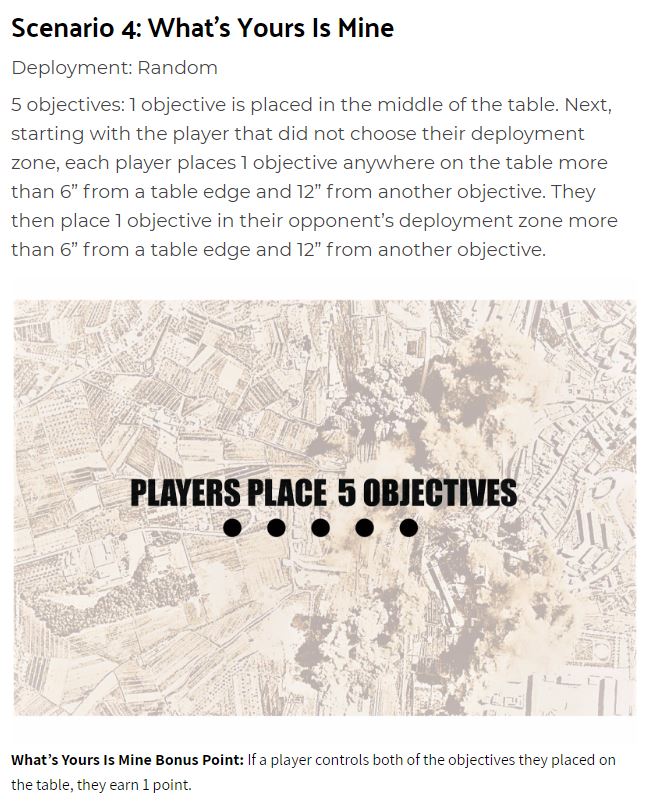 This was a needed change. The entire idea of the old “Emperor’s Will” style objective placement of one in each player zone is really as antiquated as the Relic. They are great narrative missions but they lack a lot of what is needed for a good competitive, tournament level, missions in 40k. This one is quite interesting as it is bringing back some of what was missing from the last round of ITC missions, player placed objectives. Now, that said, I am not advocating for going back to all the objectives being player placed, nor do I want to see more missions using that mechanic. I think the current balance of 2 out of 6 missions using that mechanic is perfect. September and Orktober are going to be really interesting in terms of the ITC rankings and the Meta. With NOVA right around the corner, SoCal Open rapidly approaching, and two big released for 40k it’s probably best to start getting ahead on these new missions and learning just how you need to adjust those finely tuned lists now! Thanks for reading, next week I will talk a little more about the different rankings and try to get another interview into the mix, let me know what you think about how the ITC meta is shifting in the comments!

Hey, some of us Nid players are still battling against knights! We’re trying at least… good article as always, keep em coming!

I saw three Nid players over the weekend at a GT putting up the good fight, but everytime one ran into a Knight heavy list it was so one-sided. Thanks!

Yeah, Nids really struggle with Knights at this stage. If you go Smite spam I think they can do it OK but that is sort of lame.

I run a Tervigon, personally, with lots of defensive buffs and then hit Knights with Gants and use Acid Blood+Tervigon respawn and that helps.

I think tyranids have tools to fight against knights in the codex, but they require too many points invested in them to make for an all comers list.

For instance, shock and rupture cannons are effective against knights, but if you only bring one unit of hive-shockers and/or one rupture-fex, they will be erased in turn 1 (and the knight player will usually get turn 1).

In order to be effective, you need to bring multiple units of them, but at that point your list is totally screwed against anything else.

That and the lack of invul saves on many of the big/medium bugs means something like a Castellan can make short work of them pretty easily. Again, you need a lot of LoS blocking terrain to make a game of it.

Not much change? I think there is a new name on top 10!

Jokes aside, it’s been a frustrating season where my scores were all slow causing me to keep getting jumped by people with more recent scores.

Yeah, that can be a frustration for sure. Sorry, I forgot to mention it!

All good man.
It would be awesome to see a line chart of everyone who has been in the top 10 at any points score and ranking throughout the season. It would give you something to look at to see movement.

Genestealers are good, they hit hard and Knight invul don’t help. If you get them there…

Stealers can do it, yeah, particularly when swinging twice.

Can confirm that the struggle for Necrons (me) and Nids (buddy) is real. Like I have said it is kind of sad to see Necrons go from the terror of all armor heavy armies to a joke. With a have assed screen stopping melee for a turn or more is all Knights need to clean house.

My Nid buddy has won one game with just board control with mass bodies but I have not found the way Necrons can compete yet. (without going crazy dumb triple vault list that is sure to be smashed in Chapter Approved).

Not trying to knock GW at all with all the variables it is amazing that only 2 armies can’t deal with knights and with the involvement they have with the community I don’t think we will have to just ‘deal’ with it till next edition. NuGw rocks!