Team USA’s Coach Brings us a Report from the ETC!

You are here: Home › 40K › Battle Report › Tournament report › Team USA’s Coach Brings us a Report from the ETC! 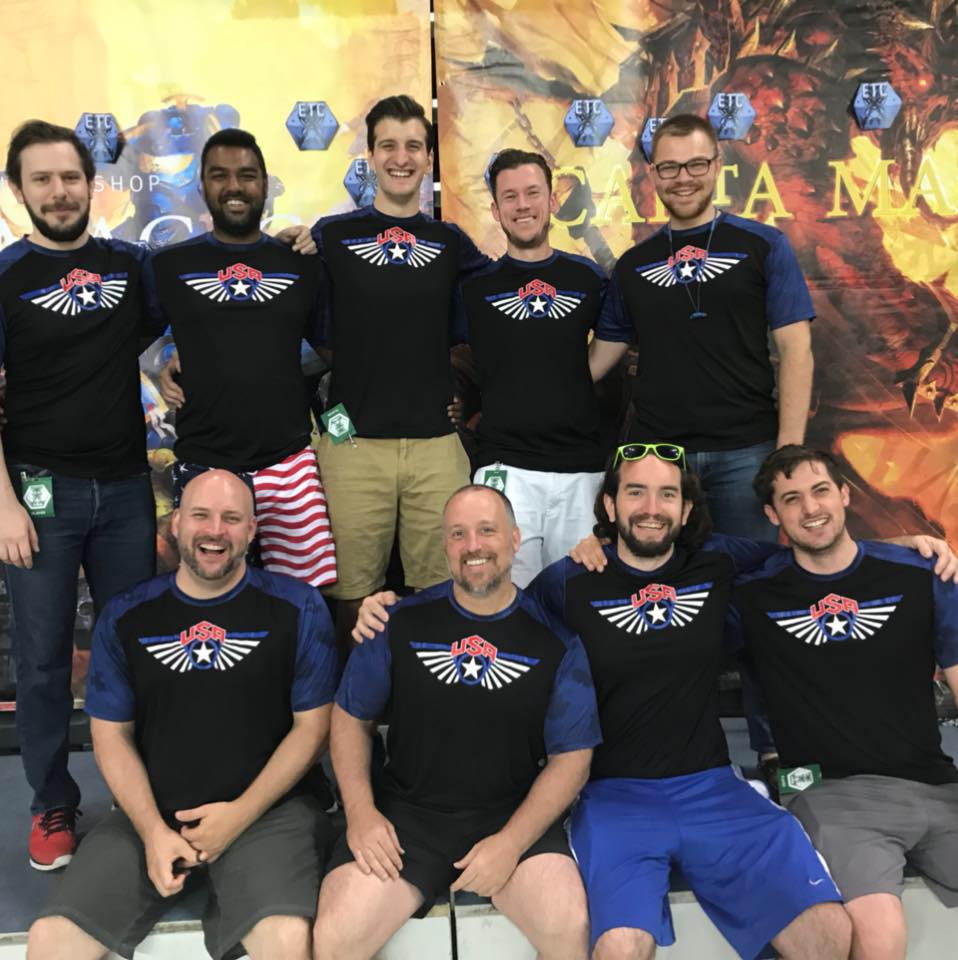 Team USA’s 40k coach, Werner Born brings us an after action report from their championship performance at the ETC complete with the team’s lists!

Here’s a link to each of Team USA’s individual players’ results.

Round 1 – France: First round pairings for ETC are revealed in advance of the event so we knew we were not getting an easy start to the event as France is a perennial contender. Their eldar player won the ESC (European Singles Championships) this year without missing a point. Nick Rose ended up beating him 19-1. This round came down to the last games, where Brad Chester and Steven Pampreen (Bilbo Baggins) in bad matches pulled together 4 points, putting the team at 87 (86 is a round win).
Round 2 – Australia: Second round went pretty smoothly. Kurt was really clutch in this round pulling off a magical 18-2 win over a T’au list we thought was going to go poorly for his Tesseract Vaults Necron list. That gave the team some cushion and we were able to end up at 118-42.
Round 3 – Poland: Poland is another team that’s a perennial contender and I think they’ve won the ETC overall (combining all game systems) more than anyone, and their 40k team is a big part of that. Pairings in this round were very extreme, both teams walked away with 3x 20-0’s. The remaining 2 games were a 10-10 split putting the teams at 70-70 after 7 games. The last game to finish was Brad Chester who was able to win 17-3, giving us another win with just a point to spare at 87-73.
Round 4 – Belarus: Round 4 we played Belarus who I was told had several players who were on the event winning Russian team from last year. Pairings went very well though and we got 80 points from half our games, plus a 16 point win from Gonyo while all 3 of our losses were minor (getting 7, 8, and 9 respectively) to finish 120-40. This was another round where we got some really clutch performances from guys put into sub-par match-ups, like Kurt again pulling 8 points against a T’au gunline that was just dismantling vaults.
Round 5 – Russia: This was the first game of the final day. Going into it we were the only team that was 4-0, with Russia and Denmark having drawn in round 4 to both be sitting one match-point behind us at 3-0-1. This made this round all the more important, as if we could beat Russia outright it would put us in a really great position to win and guarantee us getting onto the podium. It would be inaccurate if I didn’t mention that were some issues with time management in this round, particularly in one game, and that we appreciated how well the ETC judging staff handled the situation. There was a bit of a nailbiter in this round when Nick Nanavati was in a Ynarri mirror match and made a couple misplays early in the game that put him in a bad position. He was able to fight through and get 5 points, which gave us a little breathing room, which displayed really great mental toughness on his part. Sean, Tony, and Nick Rose once again all walked away with 20s while Kurt and Andrew were both again dealt really rough match-ups.  Most of this round we looked to be in good shape where we could do no worse than drawing, though we didn’t win by a ton all the games were well played with the round ending up 96-64.
Round 6 – Spain: So we were able to beat Russia, meanwhile Spain beat Denmark in round 5 which meant that we were guaranteed 1st place with just a draw in round 6. We looked at this as more of a buffer than actively trying to play for a draw. Spain is yet another one of the countries who year in and out is in the conversation, and our final score for the round definitely doesn’t reflect how much this wasn’t a cakewalk. For about the first hour of this round I was really concerned about a number of our games. 3 of our players were seized on, and we had purposely paired both Andrew and Kurt into bad match-ups again to get better match-ups elsewhere. The issue was that since those ‘better’ match-ups were not looking great, we had a tall task. Luckily Andrew and Kurt both put on their big boy pants this round and totally flipped their games. Andrew against Ynarri made some brilliant moves which resulted in him getting a 20 point win when we expected something closer to a 0. Meanwhile Kurt was playing his vaults against a trip of Knight Castellans which is just brutal but again due to some of the best play I’ve seen in a long time, Kurt was able to win 13-7 despite this game going 7 turns. In the end basically all of the games started turning around and trending upward and we had the win via drawing locked after 5 games and the true 6-0 win being locked after 6. This was really an impressive round across the board, and featured some of the best 40k play I’ve personally witnessed.

It is incredibly difficult to even try and pick a team MVP. Tony really played lights out scoring an incredible 120/120 points. Nick Rose having such a unique list was something the team leveraged a lot in pairings getting into match-ups that other teams thought were great only to find out how sneaky his army was. Andrew and Kurt both really did some magic work, taking the dumpster matches like a champ round in and out, can’t say enough about how much mental toughness it takes to routinely ask somebody who is used to winning to just go a game we expect nothing out of 6 times in a weekend. Not only did they take it on the chin but in many rounds provided crucial points for the team. Pampreen also did a really great job coming onto the team so late in the year and coming in as a first year player (which can’t be understated, playing in the US is often very different) and pushing through a lot of tough games getting key points and providing a toolkit army that could be used dynamically in pairings. Sean Nayden, Nick Nanavati, and Brad Chester all had rounds where we needed to use them as foundations and rounds where they had some brutal games but again all performed incredibly even when the going got tough. These three also really handled the lion’s share of pairings work and with our results it has to be acknowledged how well they strategically thought through that process to put the team in a position to win each round. 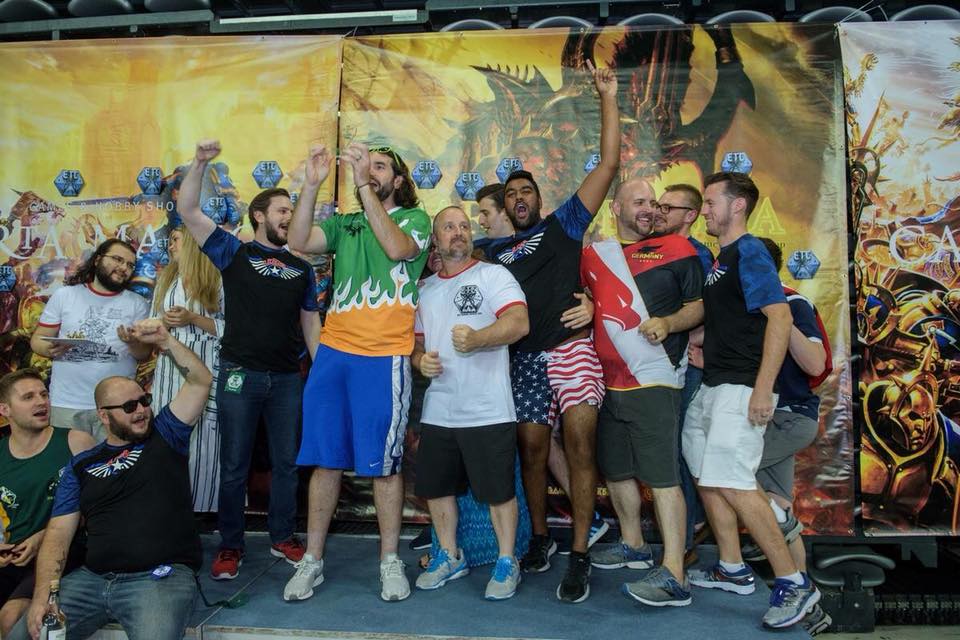 It really was an incredible experience and we want to thank all our opponents, the ETC staff, our sponsors, and most importantly all the folks who were supporting us throughout the event both online and at Zagreb. It was really incredible to have guys from other parts of the world come up routinely asking me how it was going and saying how their whole team was pulling for us.  It really is an incredible honor to represent the United States in something we are all so passionate for and the team couldn’t be more proud to bring home this win for our country.

Hi Werner, awesome report to read but I had to throw in one minor correction 😛
Denmark spanked us (Scotland) in round 3, as much as we’d love to have beaten them in round 5, we actually played and beat England that round. It was actually Spain that beat Denmark in the 5th Round.

Congratulations again on the win, and here’s to a fantastic ETC in 2019

Got that fixed! And well done on your performance at ETC!

Some of Team USA’s lists are really interesting! And Tony’s list has already caught on in a big way. At the NOVA invitational it looks like about half of the field have the same list in some flavor or another, lol.

Where can you find lists for Nova? I’ve checked BCP and cant seem to track them down.

Congrats Team USA, as a member of Team Ireland I’m glad that we got at least one jersey on the podium, and most importantly that we beat team Northern Ireland in the final round.

Congrats on the placing team USA!

Was Tony able to use the House Raven Stratagems with the single Castellan?