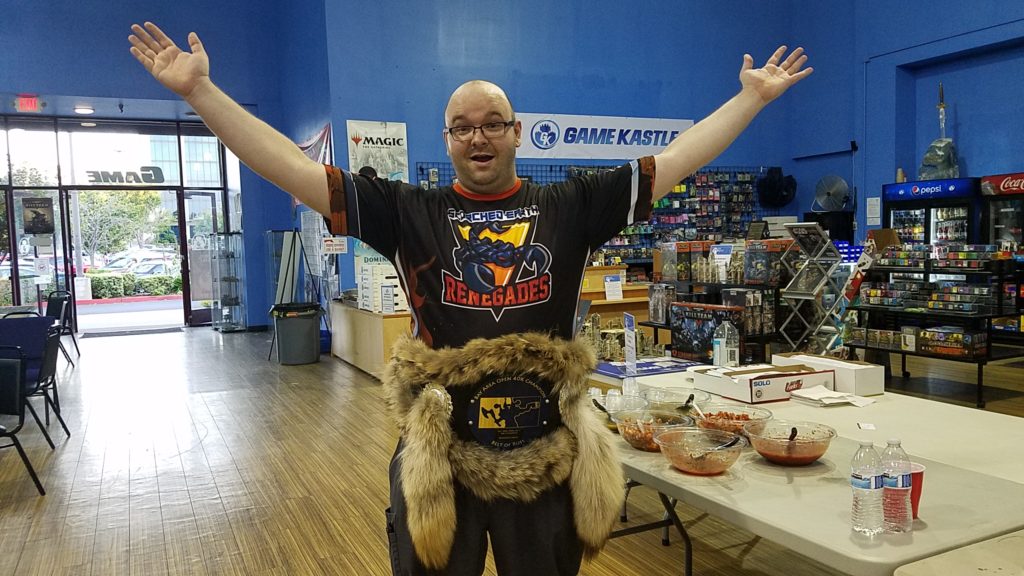 I tend to like playing unconventional lists, in general. I have never been a fan of “net-listing” or doing the usual. My least favorite part of the game, right now, is the CP battery detachments and I do my best to stay away from them, unless it makes sense for the list like Reece’s Catachan army. [Thanks, Don!–Ed.] Ultimately, I was playing around with a few lists that involved some of my pretty models like Mortarion and realized that he was not going to take an airplane ride well. He is simply too delicate to survive being in a checked bag. So I went back to the drawing board and thought of the unit that had performed very well for me before: the Blightlord Terminators. I fixed my list to be the correct points and found out that it all fit in the large citadel case and decided that this would be what I would bring to BAO.

I have always enjoyed having reliability in my list with durability to boot. Most recently, before BAO, I was known for being the guy that brought ten Plagueburst Crawlers to the LVO. This list works in a similar way, albeit, less spam. It focuses on giving my opponents tough options for which there are no right answers. Everything is durable and threatening, in its own right. Everything in the army can beat up on or destroy everything else in the game of equal points. There are no throw away units in the army that are points fillers. At the same time there is no singular pillar that, when destroyed, causes the list to fall apart. Everything can function independently, but functions much better in their synergy. The long and short of the strategies used was that turn one, I would soften up the targets that could threaten the terminators. Turn two the Terminators would come down and damage my opponent’s ability to hold objectives. Every turn after that was a hammer and anvil action.

The Terminators were my biggest “X-Factor”. I had not used them at any tournaments prior to this event. They were the heavy lifters of the army in the majority of my games. They worked well to take over my opponents’ backfields and take their objectives from them. I actually counted how many units that they had destroyed over the course of the weekend and it was either 33 or 34 units over the course of the six games. They were also able to hold objectives for the majority of those games, as well. The Helverins helped out to soften or destroy the threats to the terminators and the Knight did a great job of crowd clearing.

I also tried to utilize a Foul Blightspawn during this event, for the first time at a tournament. He struggled. Most of the time, he couldn’t get to targets, as the rest of the list was able to make short work of anything shy of Custodes. He was a last minute filler and will probably be coming out of the army soon.

I definitely feel that certain parts of the army need to be adjusted. I am definitely going to remove the Foul Blightspawn and make a  few adjustments there. I didn’t feel like giving the Daemon Prince wings helped me out in any of the games as he was mostly there to help provide auras and protect the PBCs.

I had roughly average expectations for the Blightlord Terminators in every game, but they blew them out of the water. They tanked damage, dealt damage, and controlled their portion of the board like bosses. I would not be surprised if you started seeing a similar unit in many chaos lists in the future, or imperial counterparts.

The double Avenger Gatling Cannon and Ironstorm Missile Pod knight is the staple knight of renegade knights for a great reason: he is reliable. The random number of shots or random damage of the battle cannon or thermal cannon makes them potentially better, but less reliable. The Autocannon Armigers did work in almost every game as well. They were able to help take out light vehicles or damage tougher units like Knights or Custodes. The double Avenger also comes with the two heavy flamers, which protect the knight from quite a few threats and help it to maintain an active role and threat while being in the mid or baby tier of damage. Double Battle Cannon can do work too, but it is extremely random, and my list was focused around reliability.

I am leaning to try to make it out to the Hammer of Wrath GT in Los Angeles. After that I will be staying in Arizona for a bit until the next major event of the SoCal Open. I am hoping to see everyone there and am looking forward to seeing if I was able to convince people to try terminators out in their lists again.

Don is a great guy! Well played and I hope to get my revenge soon 🙂

Glad to see Don when. Some of the 1st ITC games I played towards the end of 7th when I started again were at his tournaments. They were always fun and he is a great guy. Always good to see community leaders like him as the face of the hobby!

What Knight Chassis was he using? Trying to look at the build via BattleScribe and I am lost. Sorry for the noob question.

a normal renegade knight with double avenger and ironstorm missiles

Charlie A.
Reply to  black mage

And to be clear (since I’ve never really played knight or played against them) the renegade knight is basically a Warden but that can take whatever weapon it wants in either hand?

black mage
Reply to  Charlie A.

yes he can get a double gatling/doublerapid fire battle cannon/or double thermal cannon.

Author
Reecius
Reply to  Charlie A.

take out the 10 termies and add Mortarion.