So in this week’s article about what’s happening in the ITC, I’m not going to talk about the London GT. We’re not going to discuss allegations of terrible terrain, possible cheating, banned players, or how the GT results aren’t relevant to the meta due to the missions being book missions that used Maelstrom cards and it wasn’t an ITC reported event. Nope. Instead, we’re going to discuss the big shake-up at the top of the leaderboard for the first time in several months and the Australia/South Pacific region. 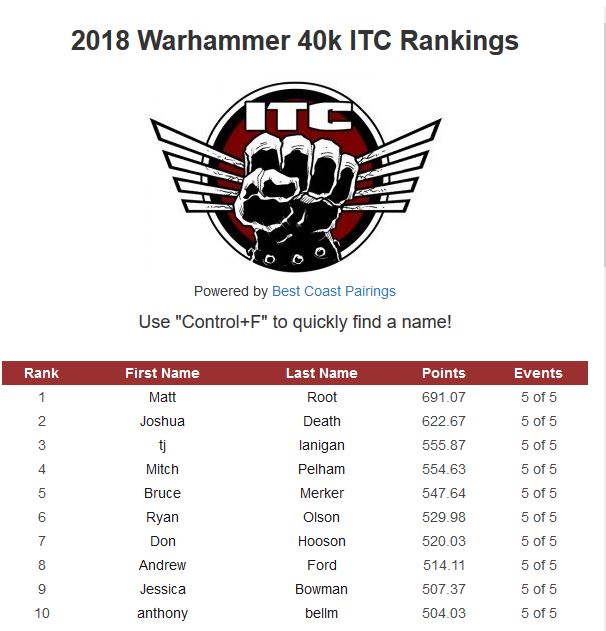 The big news in the ITC this week is that Matt Root successfully dethroned Josh Death from the top spot in the ITC overall. Both players are great players and Josh isn’t far behind Matt still, but a shakeup at the top is quite exciting as those two had been sitting at 1 and 2 in reversed positions for almost the entire season now. With less than 70 points on Josh, Matt is going to have his work cut out for him keeping that top spot, that’s not even considering all the other great players in the top 10 who are in the hunt right now. There’s not a single player in that top 10 I wouldn’t rather dodge in early rounds of a GT than play! Taking a closer look at both Matt and Josh’s reported events you can see what it takes to really compete at this level in terms of wins and event types. 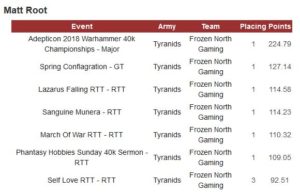 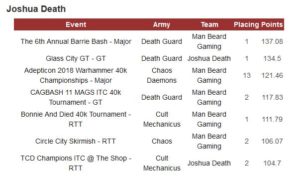 There’s a lot of GTs and Majors on those lists, plus a large number of first place finishes as well. To truly be in contention for that top ITC spot and the big prize at the end of the season at LVO it takes a lot of hard work and travel to events. The Spring Conflagration GT is what put Matt over the edge on Josh, below is a look at the top people from that event. There are no slouches in that top 5!

Getting those GT wins are really important, without that GT win Matt would still be sitting behind Josh despite Matt winning Adepticon. The ITC is a huge group of competitive 40k players and for every Matt, Josh, Jessica, Mitch, or Tony from that top 10, there are hundreds of other players plugging along building those scores a bit at a time. One such person is Eleanor Byler, currently ranked in the top 10 for the South Pacific region.

3rd place is a great place to be at in any Regional ranking for the ITC. Eleanor has been reading these articles and when I mentioned last week that I wanted to cover non-America regions this week she reached out to me to give me some awesome information about the Australian/South Pacific tournament scene.  I have had several people reach out to me so far while writing these articles to offer me information that they thought I can use for the articles. If you find yourself in a position to help me out with info about your region, faction, or team let me know. If I can work it into the articles I will! So here is a summary of what Eleanor thought I would find interesting for this week’s article.

Eleanor is actually from the US, originally from Seattle, she moved to Australia in January for a short 3-year stretch, accompanied by fellow competitive 40k player and husband, Oliver Byler. They both got into the tournament scene during the 2017 season and decided that they would do their best to participate in the Australian 40k competitive scene as much as possibly could during their time there. They have a pretty good baseline to compare the Australian tournament scene to, since they’ve both attended several US major events over the years (LVO, BAO, Nova, TSHFT) and plenty of smaller RTTs and GTs. 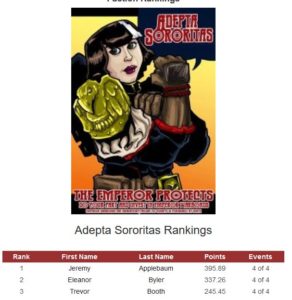 Eleanor plays sisters of battle, and right now is ranked #3 in the South Pacific region, and #2 for the Adepta Sororitas faction. Eleanor has actually written a SoB tactics article for FLG last September, (which you can find here: https://www.frontlinegaming.org/2017/09/07/sisters-of-battle-the-graceful-transition-from-7th-to-8th-edition/) Seeing as how she is finishing her Ph.D. in Australia it’s understandable that she hasn’t had the time to continue writing articles! From here on out I am going to let Eleanor speak for herself!

“In general, I’ve been so impressed by the tournaments here. At the last GT I attended (Warzone: Central Coast III), GW sponsored the event and provided AWESOME prize support, and had a table there doing demos the entire weekend. For all the GTs I’ve attended, the TOs maintain impressive social media coverage (which makes it really fun for remote spectators). For example, the Warzone crowd published battle updates from each game to their facebook page, did facebook live walk-throughs in each round, and posted pictures throughout the weekend of the attendees, the award ceremony, etc.

So far we haven’t seen any of the (famous? infamous?) Australian “comp”. Honestly, the commitment to upholding ITC rules is strong — this seems to be driven both by TOs and the players themselves — for example, there was an event running some non-standard, bespoke ruleset and for months the registration was stalled at 4 people. When the event organizers changed it to ITC rules, the event ballooned up to 32 people in about a week’s time!

One big difference that I’ve noticed — every tournament I’ve been to here (from RTT to major) have all required participants to submit lists a week before the event. Most of them then crowdsource the participants as list-checkers in the time leading up to the event. Seems annoying at first, but there have been no instances of illegal lists winning events, either:) From what I can tell, the LGT did something similar this year. 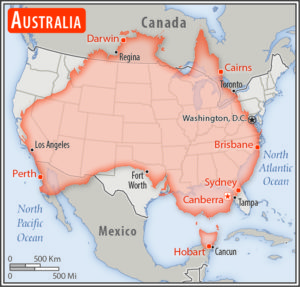 The other big difference is the scale of the events here — Australia is just a (population-wise) smaller pond. This applies to size and frequency of events, though I will note that I’ve mostly been attending events in the Canberra and Sydney area because drive times become prohibitively long for other cities. Since arriving here in January, there has been 1 major (Cancon, which was the same weekend as LVO and counted toward last season), with the next one coming up in July (Wintercon). In my general area, there are ~3 Majors a year, with something like 60-90 attendees. There is about ~1 RTT a month in each of the major cities (something like 12-20 attendees) and GTs every ~2 months, more frequently in Sydney, with 30-35 players.

The meta here is pretty similar (e.g., Aeldari have been doing very well), though with some slight differences — superheavies are STRONG and quite prevalent here — at the GT last month, there were three lists in the top 10 with 2, 1 and 3 superheavy tanks in them. These are generally paired with AM detachments for all the CP (and access to that crushing tracks stratagem..!) but occasionally something like custodes.” -Eleanor Byler

It’s really cool to hear about how the different competitive scenes and metas from around the world compare, having someone who has participated on a regular basis in more than one of these diverse international metas is even cooler. There are certainly going to be trends that are similar across the board in 8th edition, but hearing about the slight shifts in meta from one region to the next is fascinating. I have been using a Shadowsword as a component of my Grey Knight primary army the last few months, and out store routinely sees the big stuff on the tables at local RTTs but hearing about the success of those big models in lists across the Pacific is interesting to say the least. The news that a local event had a hard time recruiting players until they switched to the ITC format is quite telling, I know I personally wouldn’t bother attending an event that isn’t reported to the ITC and would definitely not attend a tournament running 8th ed book missions. I don’t have to play ITC missions, although I prefer them, but book missions in a competitive environment are lackluster. I hope you enjoyed this week’s article, let me know in the comments, and remember if you have something you think I should cover in these articles let me know that too!