GW gives us more information on the vaunted Stormcast Eternals for Age of Sigmar to coincide with the upcoming new edition of the game!

This article was originally posted on the Warhammer Community site. Check them out for more great content!

Welcome to Faction Focus – a new series on Warhammer Community exploring the various armies battling for the fate of the Mortal Realms as we get ready for the launch of the new edition of Warhammer Age of Sigmar.

If you’re just taking your first steps in the Mortal Realms, we’ll be running down why you might want to try each army, while if you’re a veteran player, we’ll be checking out what the latest news and rules changes mean for your army. In this Faction Focus, we’re checking out the Stormcast Eternals, as well as taking a closer look at some awesome new models…

Stormcast Eternals are immortal warriors from Azyr that wield the holy power of the storm. When a soul in the Mortal Realms lives a just and true life, upon death, they can be called to Azyr to serve in the armies of the God-King, Sigmar. Each Stormcast Eternal is armed with inviolate sigmarite plate and weapons, and enhanced with a range of powers – from vastly increased strength to more unusual abilities, like detecting lies, projecting bolts of lightning or negating dark magics.

– An Army of Champions

The Stormcast Eternals are one of Warhammer Age of Sigmar’s most elite forces, making them simple to collect and paint – you’ll only need a few models to fill out your first army.

All Stormcast Eternals units are durable and hard-hitting, making units like Liberators and Sequitors forgiving and effective for new players.

When you’re ready, you’ll be able to diversify your army with a huge range of powerful units, unleashing flank-strikes with the Vanguard-Hunters or making a devastating charge with the Dracoth-mounted Extremis Chamber. No two Stormcast Eternals armies need ever look alike.

Warhammer Fest brought some very exciting news for the Stormcast Eternals – a new chamber is opening, and a new kind of warrior is joining the ranks of Sigmar’s finest. We got our first look at the Sacrosanct Chamber this past weekend, and we know many of you have been clamouring for a closer look – so here’s the inside scoop on what we know so far about Sigmar’s warrior-mystics.

The rank-and-file of the Sacrosanct Chamber are Sequitors. Like Liberators, these warriors are the line infantry of their respective Chamber but specialise in fighting magical foes, like Daemons and Nighthaunt. They have a few magic powers of their own, too – each was a mystic, priest or mage in their former life and now possesses the power to channel energy to their shields or weapons where needed. 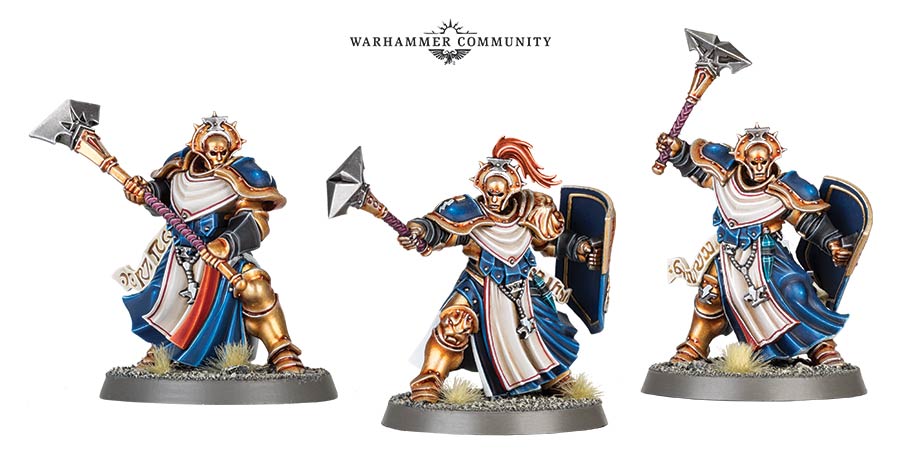 Evocators are warrior-mages – hybrids of  Stormcast Eternals Paladins and Battle Wizard of the Collegiate Arcane. Armed with sword and stave, the Evocators can enhance the abilities of other warriors of the Sacrosanct Chamber with powerful spells. 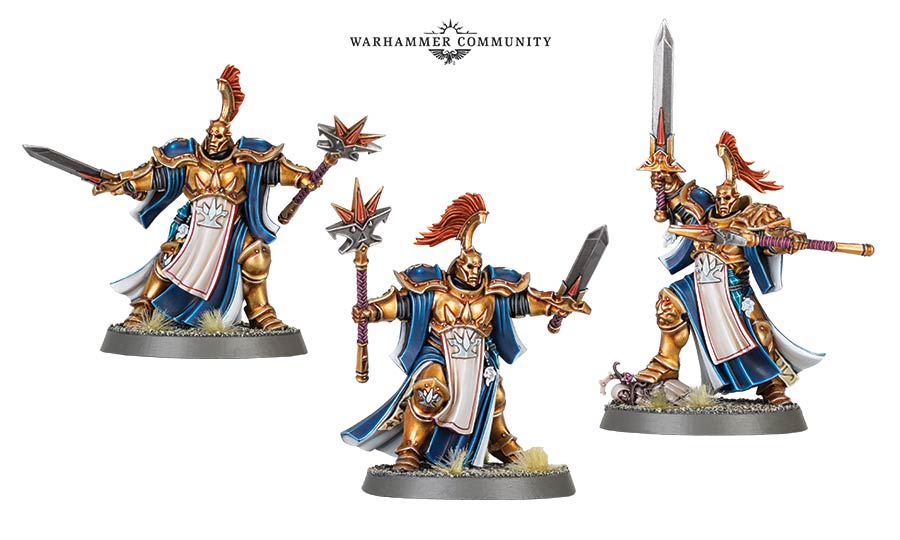 Castigators are crossbow-wielding warriors who fire crystalline bombs charged with Dracoth breath to obliterate both conventional and ethereal foes alike – like the Sequitors, they can charge their weapons with lightning when the need arises. 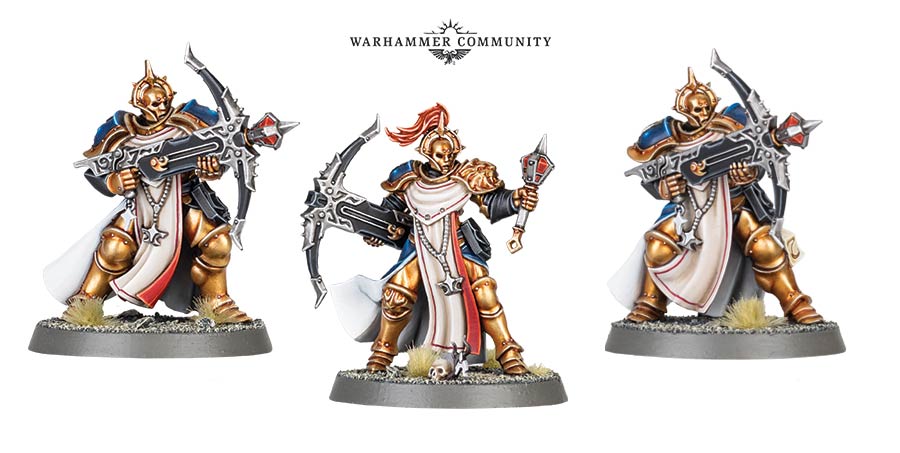 The Celestar Ballista is the first ever Stormcast Eternals war machine. The Sacrosanct Chamber isn’t just made up of mages and mystics, but also engineers – the Lord-Ordinator was just a hint of what’s to come…

Armies from the Sacrosanct Chambers are commanded by Lord-Arcanums – veteran magi with a mastery of soul-craft. Having overseen the Anvil of Apotheosis – where the souls of dead Stormcast Eternals are reforged to life, the Lord-Arcanums heal their fellow warriors and return them to battle nigh-instantly. Many Lord-Arcanums ride celestial beasts into battle. 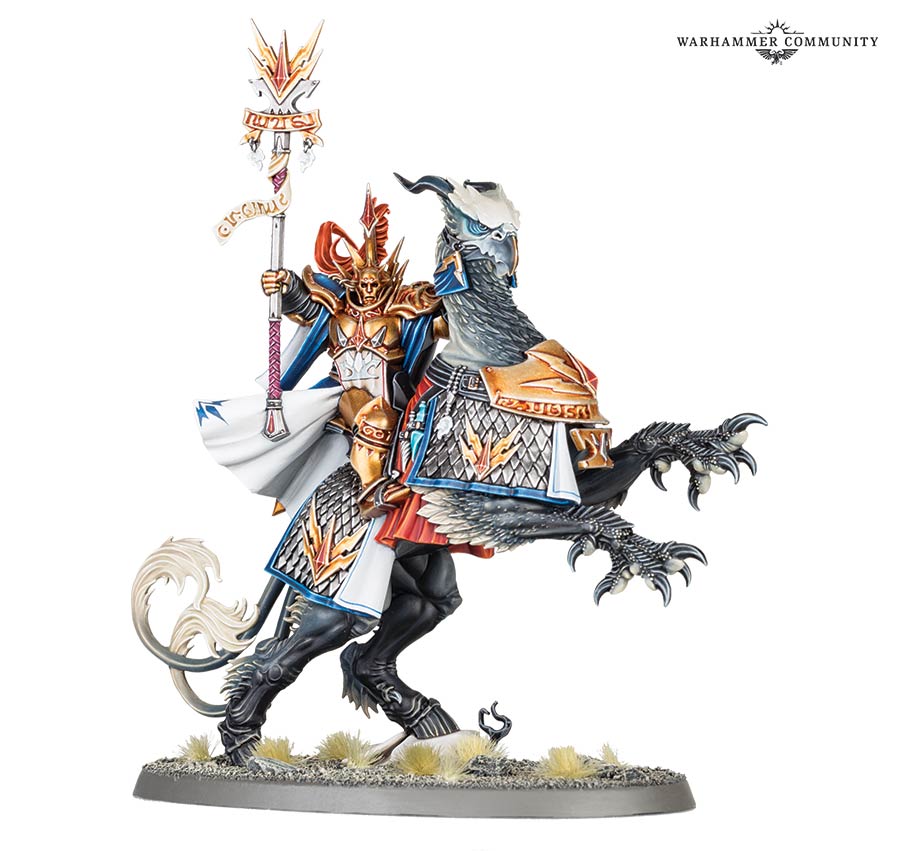 The Sacrosanct Chamber is sounding pretty cool – but how do they work in battle? Let’s check out the warscroll for the Knight-Incantor to get our first look at the rules for these warrior-mages: 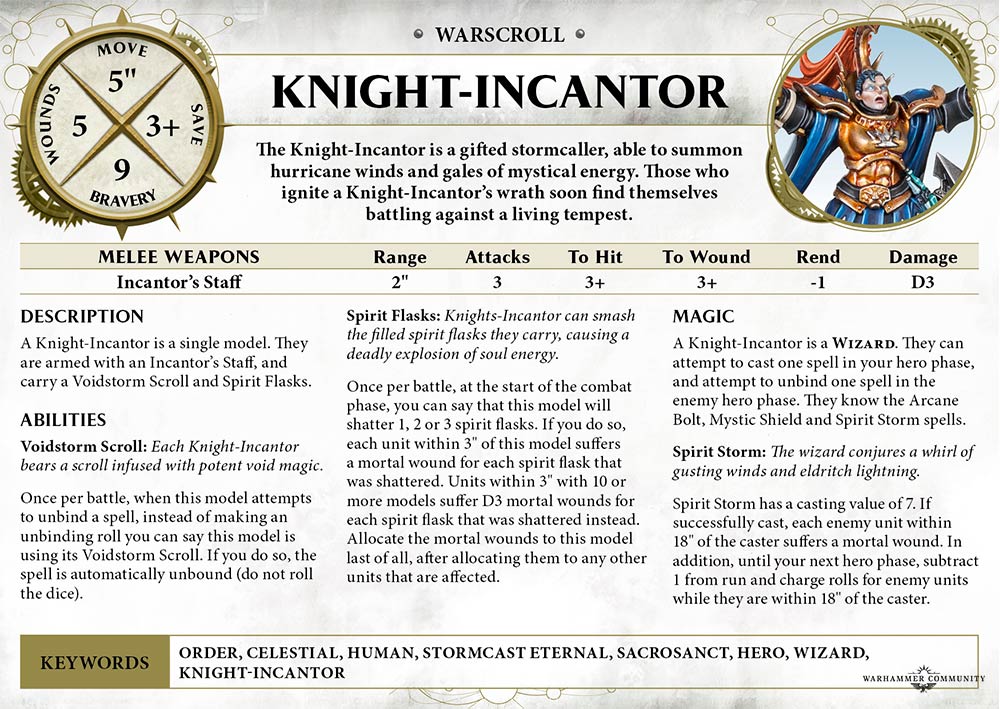 And That’s Not All…

We’ll have more news on the Stormcast Eternals before long – in the meantime, check back tomorrow for another Faction Focus and our first look at the changes to the core rules in the new edition of Warhammer Age of Sigmar.

(Seriously though I love these models, best Stormcast yet by far, but then I am already a fan)

Yeah! Magic and artillery. Just what they were missing.

Can’t wait for this release! My Stormcast could always use some magic and more ranged support 🙂

Models look absolutely gorgeous as well! GW been knocking AoS releases out of the park imo.

This has indeed really become a fully fleshed out army.

Wasn’t the lack of magic and artillery meant to be the weakness of Stormcast? It seems GW is instead pushing them as the “perfect” army, with no weaknesses at all.

But to be fair, they probably also sell the best and so it makes sense to give them the most kits financially.

However, from the perspective of those who play other armies it certainly can seem unfair.