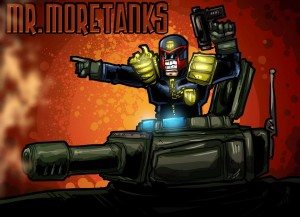 Allarus Custodians are the shock troops in an army of shock troops.  The title of Allarus is rewarded to a select few whom are invited into the ranks by the Captain-General himself.  Used to crack open the enemy’s line or assassinate the enemy commander, there are few enemies more deadly and precise than the Allarus.  Clad in tactical dreadnought armor that is even more rare than other patterns, Allarus can move swiftly about the battlefield, all the better for hunting the enemy.  In addition to the firearms built into their spears and axes, these Custodes have wrist mounted grenade launchers that are used to blast apart and blind the body guards of those who would challenge the Emperor’s galactic supremacy.  While the Allarus are among the most brutal killers within the Legio Custodes, they are not mindless berzerkers.  They’re thirst for battle is controlled in a Zen like hatred for heretics, xenos, and demons.  Once they’re primary target is dispatched, Allarus Custodes will often break apart into the enemy’s forces.  So powerful and durable are these warriors that they can survive with little to no support as they sow terror and confusion upon the enemy.  This is perhaps the ultimate reflection of what distinguishes the Custodians from forces like the Astartes; Custodians are taught to fight by themselves.  While able to fight with terrifying efficiency in any scale, Custodians are unique in their ability to rely upon themselves.  It may be just a single Custodes that stands between the Emperor and an assassin, so they must be able to handle any foe alone.  While Wardens are used when the line cannot falter, Allarus take to the field to crush the enemy’s line. 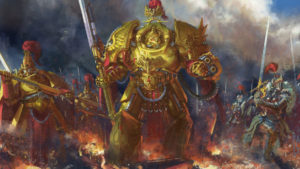 Of course, this is what the lore says.

On the tabletop, this is how they look.

Allarus Custodians carry a Castellan Axe and a Balistus Grenade Launcher.  They may trade their axe for a Guardian Spear and they may also take a Misericordia.

With a unit size of 3 to 10, like basically any other Custodian Infantry unit, these guys can eat up your points very quickly.  Before weapons, the Allarus are 70 points each.  I’d pretty much always go with axes over spears with these guys, since spears are so prevalent throughout the force.  So with each terminator coming in at 84pts, 3 of them are 252 pts.  Thankfully the grenade launcher is free, but that is a big price tag.  I think to make the most of these guys, you need to have at least 5 of them to maximize their rules and their stratagems.  I’ll probably dive into the stratagems in more depth in a different article, but there are a couple that we need to note, because it is what really brings the most out of the Allarus. 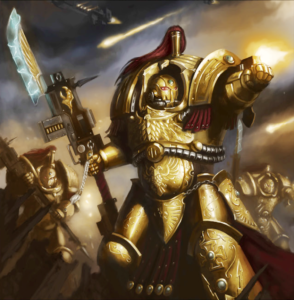 One small thing to acknowledge, is that these Terminators still move 6 inches in the Movement Phase.  This is pretty cool, because combined with their Deep Striking ability, they can really keep pace with just about every other unit in their Codex.  That is not really something that can be said for other Terminators in the game.

In addition to the Special Rules that are available to all other Custodes units, the Allarus Custodians have two other Special Rules.

Slayers of Tyrants: When models in this unit pile in and consolidate, they can move up to 3″ towards the nearest enemy CHARACTER even if it is not the nearest enemy model, so long as they finish this move within 1″ of an enemy unit.

From Golden Light: During deployment, you can set up this unit in a Godstrike-pattern teleportarium array instead of placing them on the battlefield. At the end of any of your Movement phases they can teleport into battle – set them up anywhere on the battlefield that is more than 9″ away from any enemy models.

Deep Striking is critical in this edition, and even with the recent FAQ that forces you to be unable to deploy into your opponent’s deployment zone until at the earliest Turn 2, you can get quite a bit from these guys later in the game.

The Allarus are Character hunters, as evident in their Slayer of Tyrants rule and the Stratagem, Inescapable Vengeance which allows them to shoot at enemy Characters, even if they aren’t the closest target.  This combo with the guns off of the axes/spears and the grenade launcher is actually surprisingly efficient.  While you’re unlikely to kill a Space Marine Captain, you could easily kill off a Commissar, or similar level of durability Character.   Maybe even something nastier depending on the size of the unit.  You’ll need to be in close though, and there is the problem.  Deep Striking in, you’ll be over 9 inches away from an enemy unit, and unless things are going very wrong for your opponent, it’s unlikely that you’ll be within 12 inches of a character that you need to target.  The stratagem is situational, and most likely won’t be used until mid-game.  This is a problem, as you’ll likely be spending your stratagems to increase your killing power in assault or your durability.  I’ve seen this stratagem used to devastating efficiency, but, it’s not going to be very common.  I think it costs too much at 2 Command Points, especially since the Custodes are a very hungry army for Command Points.

The other stratagem that can be game winning for the Allarus is Unleash The Lions.  Used at the beginning of the Movement Phase, this stratagem allows for the unit to split apart immediately into units consisting of a single model for 2 Command Points.  This one again, is very situational, but can be game winning.  Being able to go and hunt down weak targets or run and grab RECON points in an ITC game, is an important aspect of victory.  Flexibility with this unit is its biggest strength, but that is a tall order.  You’ll really only get the best out of this stratagem if you’re bringing a bigger unit, and that may not be a good choice.  Still, an Allarus Custodian can carve through most things in a one on one fight; and five of them running around individually in the backfield picking apart things will cause nightmares if you’re picking the right targets.  Devastators, Scouts, Weapon Teams, Broadsides, Tanks; all are excellent targets that would likely fold against even a single Allarus Custodian fighting them.

If you’re going to bring the Allarus to the fight, I think they need to be in a unit of at least 5, and carrying axes.  That means that they clock in at 420pts; which is quite frankly, too much.  If you’re set on not bringing bikes, or want to try something different, you can make these work, but you’ll likely need to have some cheap allies in the backfield holding Objectives.

List building is going to be critical with these guys.  On one hand, you don’t have to spend Command Points to put them into the fight through Deep Strike, which is great; but to get the most of them, you’ll need to be smart on how you place them, and use your stratagems critically.  If you don’t, you’ll have wasted a ton of points, which is something that the Custodes cannot spare. 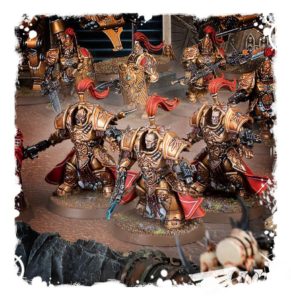 Hunt Characters, break apart the enemy’s support, and then smash into their lines with a brick.  You can either split the unit apart and go wild throughout the backfield, or find the strongest part of the enemy’s army and pin it down.  If you can get a Shield Captain with these guys, do it.  The Shield Captains on Dawn Eagles are the best call for sure, since they can speed up and catch up to the Deep Striking Terminators.  Seems obvious, but it’s worth saying.

So my final verdict?  I have some serious mixed feelings on these guys.  I think they just simply cost too many points, which is a shame, because they can fulfill a cool and functional role on the table top.  Given how good jetbikes are, you really won’t see them on the table top.  They just face the same problem that most of the other units in this book face I think, they cost a bit too much, and there is a very powerful unit in the Codex that they compete against that is priced perfectly.

In a pinch, you can have basic Custodian Guard perform the function that these guys do.  Allarus Custodians just feel too situational for me unfortunately.  This is a shame, as I love the models and feel like these models actually have rules that can actually capture their lore.  I feel like 5 of them should cost closer to 375 points.  I don’t get to write rules though, oh well.

Thanks for reading guys.  I’ll see you next time, thanks for taking the time to read through this one, I know it was a long one.

I can’t stop myself from misreading them as “Allosaurus” Terminators. Kind of want to do some conversions along those lines at some point 😉

Make sure they have right number of fingers or I will be seriously angry.

Funnily enough, Forgeworld Aquilon Terminators(at least ones I got) have 6 fingers on their bolter arm))))

They cost to much points.

Then the faq came and screwed their deepstrike potential, something they had included in their already to steep point cost so now after the faq they are significantly overcosted.

And no, absolutely nothing will happen to adjust this in the next ca.

Have play tested these guys extensively. And while they always kill a lot of things, so do bikes for 6 points more and a lot more mobility and now not screwed by FAQ. So they don’t make the cut anymore.

Unleash the lions is so situational it’s a real trap. A CP trap and in the end, since you need at least 4-5 to make it worthwhile, a list building trap. All their other stratagems are situational or useless. -1 AP can be useful, concussion not so much. Not much hurts Custodes in overwatch that’s infantry. And character thing only works if your opponent has left their character out in the open.

So while I love love these guys cause they look fricking awesome, they just don’t beat bikes for an extra 6 points