You are here: Home › Age of Sigmar › News › Daughters of Khaine Preview: Part 5 – Magic and Prayers

The Daughters of Khaine information continues to roll on!

This article originally came from the Warhammer Community site. Check them out for great hobby content!

A shadow is falling on the Mortal Realms – the Daughters of Khaine have come. Infused with sadistic cruelty and holy purpose, these brutal zealots will soon be yours to command, thanks to a new battletome, new units and of course, Morathi herself! In our latest preview, we look at the new magical spells and prayers from the battletome: Daughters of Khaine.

The Mortal Realms are rich with magical power, but few possess the strength of will to harness it. The Daughters of Khaine are children of two ancient traditions – the bloody cults and (seemingly) god-given power of Khaine and the dark magics of Ulgu, the Realm of Shadows. In the new battletome, you’ll be able to harness both to their full effect with two new tables for your Priests and Wizards to draw from. Combined, you’ll have a dizzying range of tactical options available, allowing you to harness the power of your units and unleash all manner of devious tricks upon your foes. 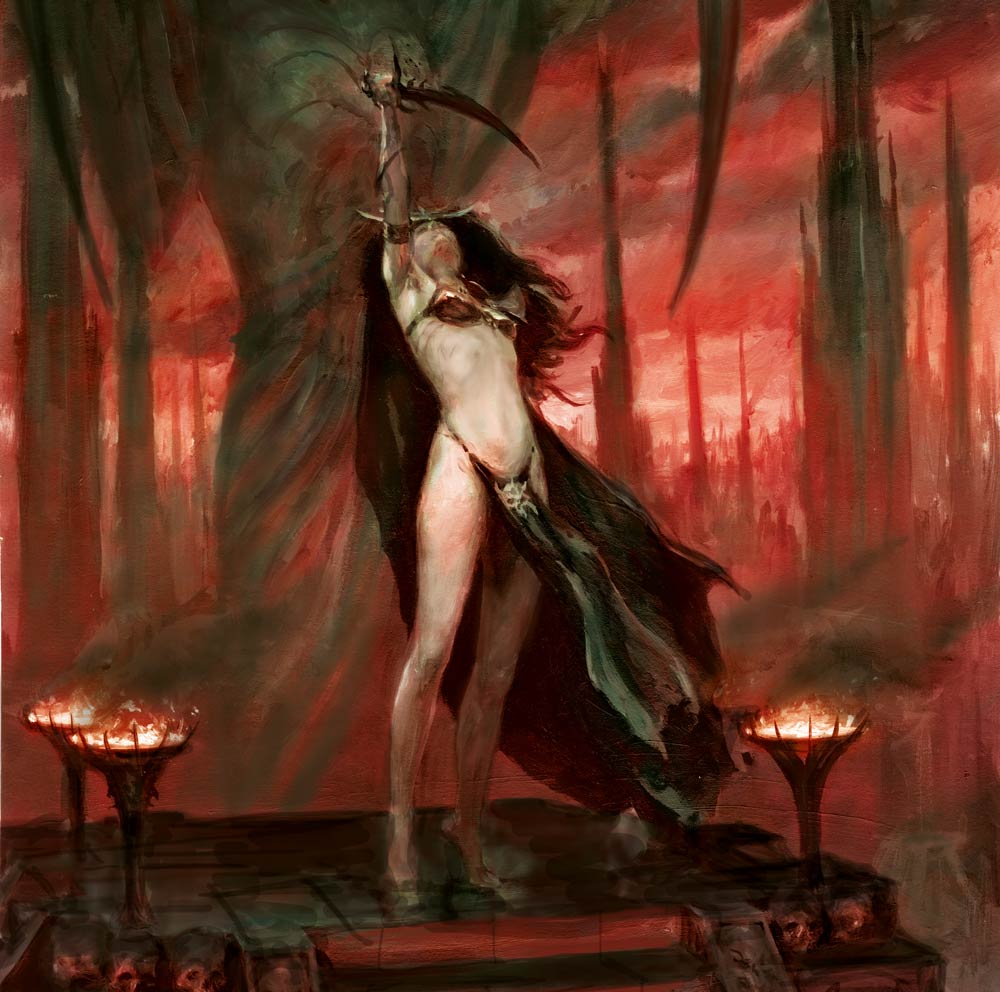 Firstly, the Lore of Shadows. We’ve taken a closer look at the unstable arts of Chaos and the wild magics of Destruction in previous battletomes, and while shadow magic is a little more subtle than these, it’s no less powerful, allowing the canny player to deceive their foes and enhance the power of their own units – or even unleash the dreaded Pit of Shades…

Mindrazor allows you to turn your foe’s low Bravery against them and should allow you to tear through less elite infantry with ease. The additional point of Rend, meanwhile, is always welcome and helps you mitigate the effectiveness of your enemies’ saves. 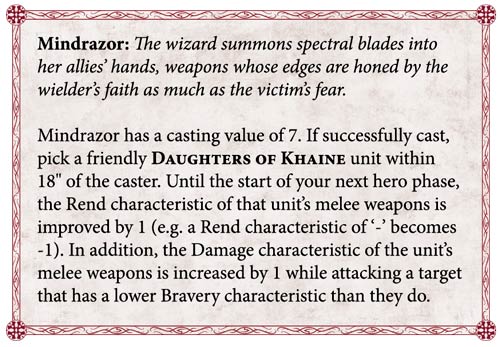 Meanwhile, against larger foes, The Withering can help you maximise the damage you stack up, even with less powerful attacks.

Finally, the Pit of Shades is back! Against the right foe, this spell is unbelievably deadly and is a great way to punish durable but slower-moving models, like Grave Guard or Ironbreakers. 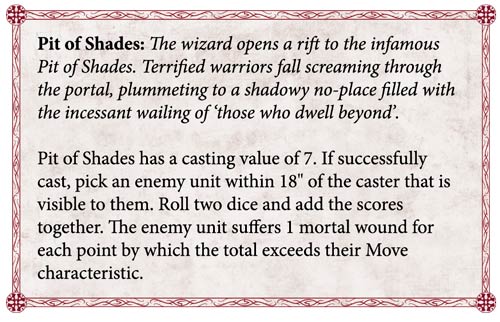 Of course, you may be wondering just who will be casting these spells – after all, Hag Queens are talented, but lack magical aptitude, and while Morathi’s mastery of shadow magic is certain, what if you want to put more casters in your army? 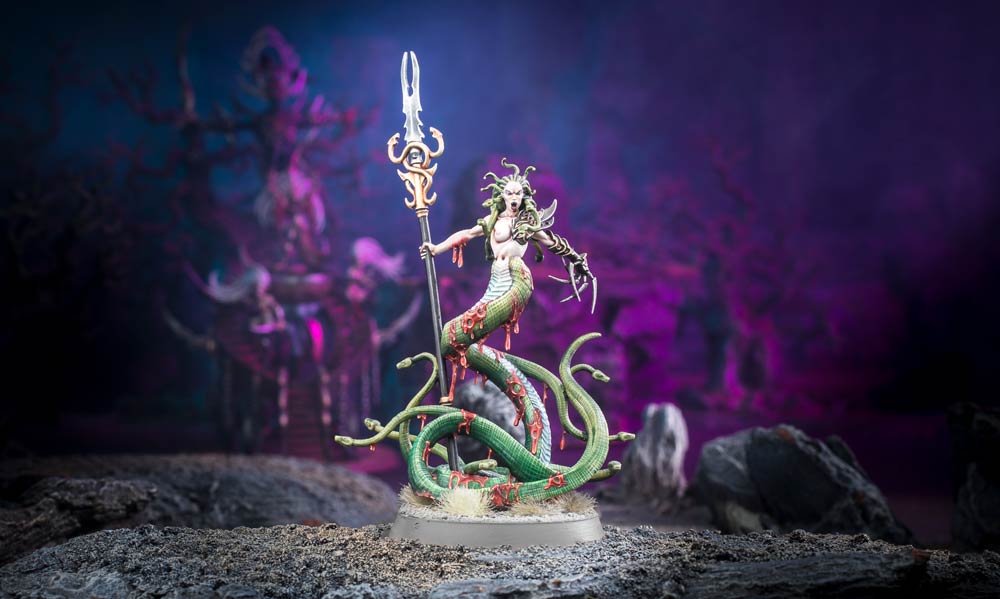 The Bloodwrack Medusa is the answer. Previously, these creatures were thought to be mere monsters – the truth is far more complex. Bloodwrack Medusae are high-ranking members of the Daughters of Khaine who once doubted the will of Morathi – to secure their loyalty, Morathi has infected them with her own vital essence, causing them to assume a similar form to her and granting them mastery of shadow magic – as well as binding them to the Shadow Queen’s will utterly. You’ll find they make for a useful alternative command option for your army. 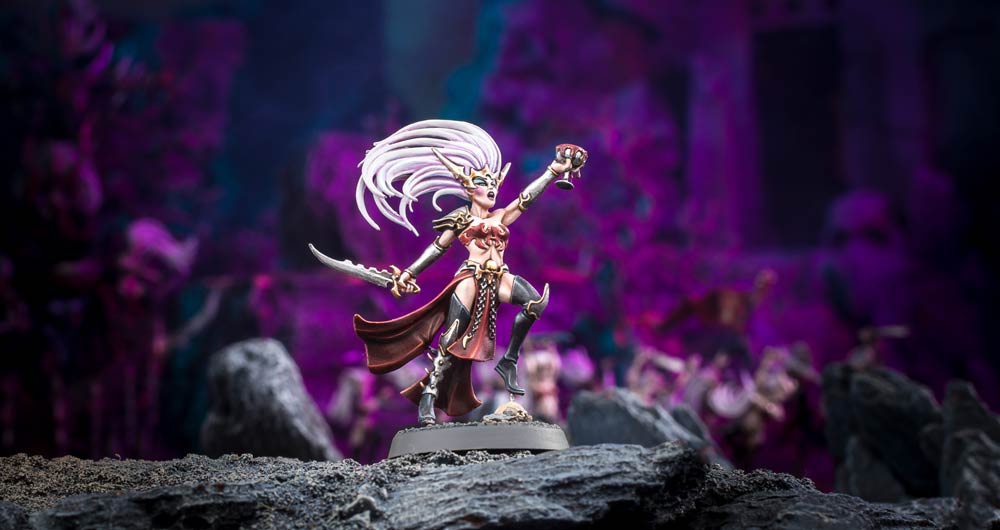 There’s more – for those who prefer blood to shadows, you’ll have six more powers to draw from in the form of a Prayers table packed with Khainite blessings for your army. Our favourite by far is the Martyr’s Sacrifice, an enchantment that can make killing a unit of Witch Aelves a very dangerous prospect indeed. 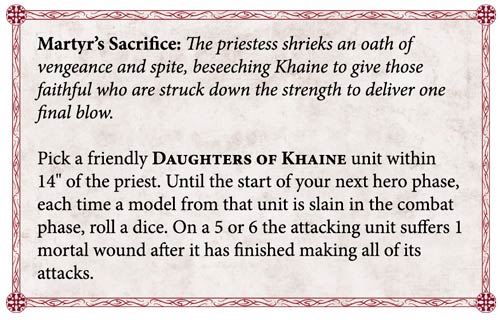 Martyr’s Sacrifice will be invaluable when dealing with the most dangerous enemy combatants by turning their offensive prowess against them. If you’d rather keep your units alive, you’ll want to use Blessing of Khaine, an ability that makes your Fanatical Faith save much more reliable: 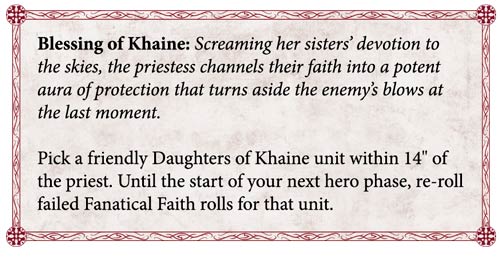 Between Bloodwrack Medusae, Hag Queens, Slaughter Queens and Morathi herself, your Daughters of Khaine heroes won’t just be terrors in close combat but invaluable support units with these new spells and prayers on hand! You’ll be able to pick them up for yourself by pre-ordering the new battletome this weekend – meanwhile, make sure to check back on Monday for even more information from the new battletome.

← Signals from the Frontline #582: Daughters of Khaine on the Way!
Chaos Daemons Comprehensive Overview →