More awesome info on the cool new faction for AoS: the Daughters of Khaine.

This story was originally published on the Warhammer Community site! Check them out for more great hobby info.

A shadow is falling on the Mortal Realms – the Daughters of Khaine have come. Infused with sadistic cruelty and holy purpose, these brutal zealots will soon be yours to command as you’ve never seen them before, thanks to a new battletome, new units and, of course, Morathi herself! In the second of a multipart preview, we’re looking at this legendary master of shadows – in BOTH of her forms…

Morathi is one of the handful of survivors from the world-that-was, an inveterate schemer and betrayer who has served countless masters and hatched countless schemes. Morathi has been high priestess for the aelven gods of old, served Slaanesh, conspired to put Malerion on the throne (back when he was still Malekith) and only survived the transition to the Mortal Realms through sheer cunning. Powerful enough to claim a place amid Sigmar’s Pantheon, Morathi would abandon her former allies following failed attempts to manipulate them and even and even bitterly parted with Malerion, who claimed the Shadowlands of Ulgu and the capital of Druchiroth for himself. 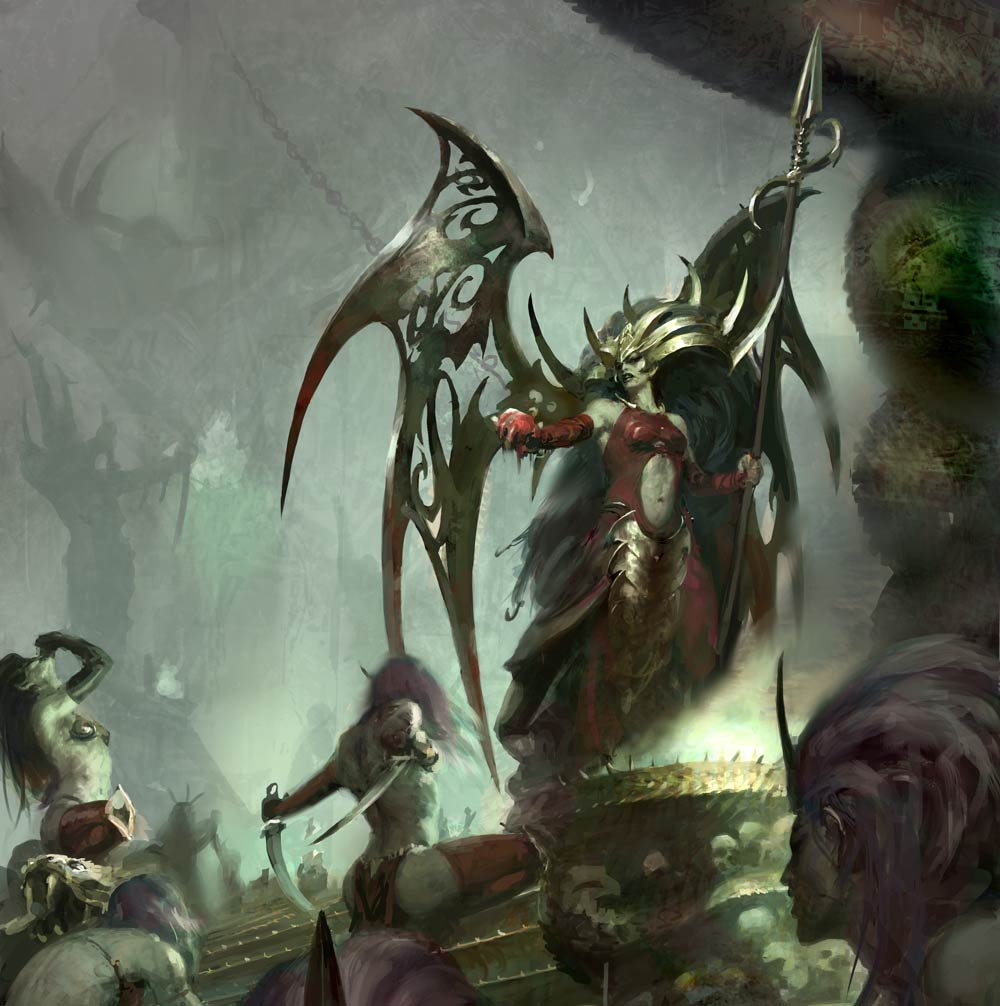 Now, Morathi has reformed her uneasy alliance with Sigmar and the Pantheon of Order, but in truth, seeks only power and glory for herself. She may have the same empire-building impulses as the rest of Order, but her ultimate aim is revenge upon those who have spurned, scorned or tormented her – and a dark apotheosis, filled by the blood sacrifices made in Khaine’s name… 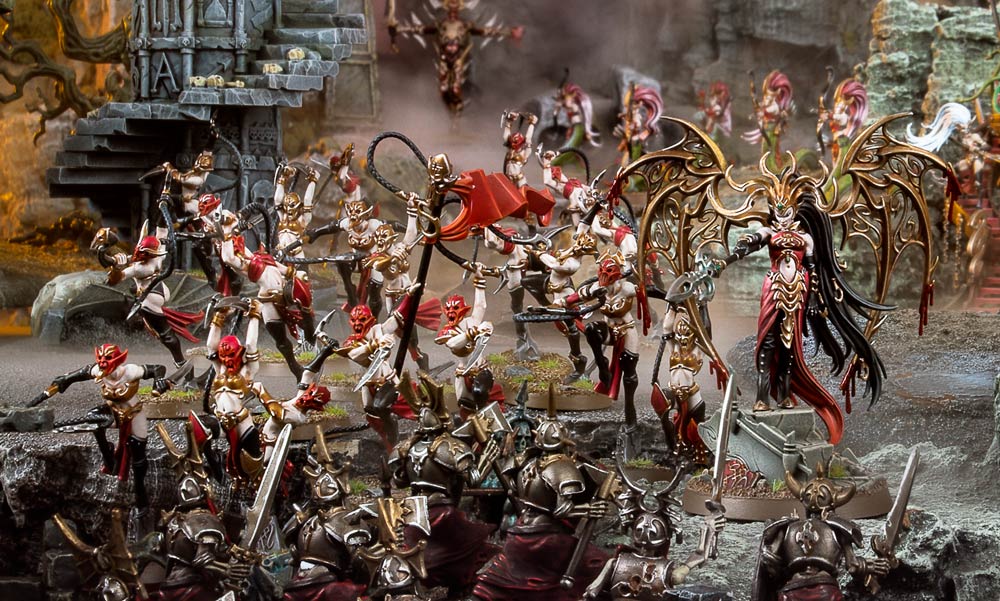 Rather than choosing which form of Morathi you use, you’ll start every game with her in her High Oracle of Khaine form. In this shape, she makes for an invaluable commander and spellcaster, gaining bonuses to cast and unbind. While she’s a little fragile, with a mere 6 wounds, her Enchanting Beauty and Iron Heart of Khaine abilities make her impossible to kill in a single turn and difficult to pick off with ranged attacks: 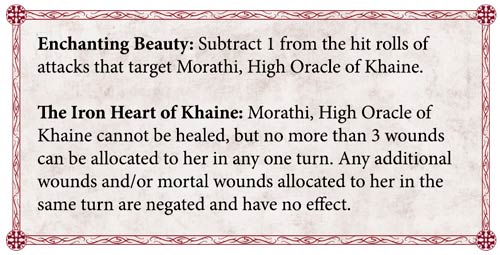 Where Morathi, High Oracle of Khaine really shines is in her command ability, Worship Through Bloodshed: 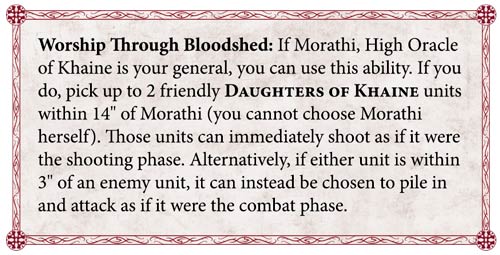 Keep Morathi in her High Oracle of Khaine form long enough for your heavy hitters to reach the enemy lines, and you’ll be able to obliterate your foes. Watch out for your wounds, however – while you can transform Morathi deliberately, she has a chance of losing control when damaged. Luckily, this is likely to be far worse for your foe than it is for you: 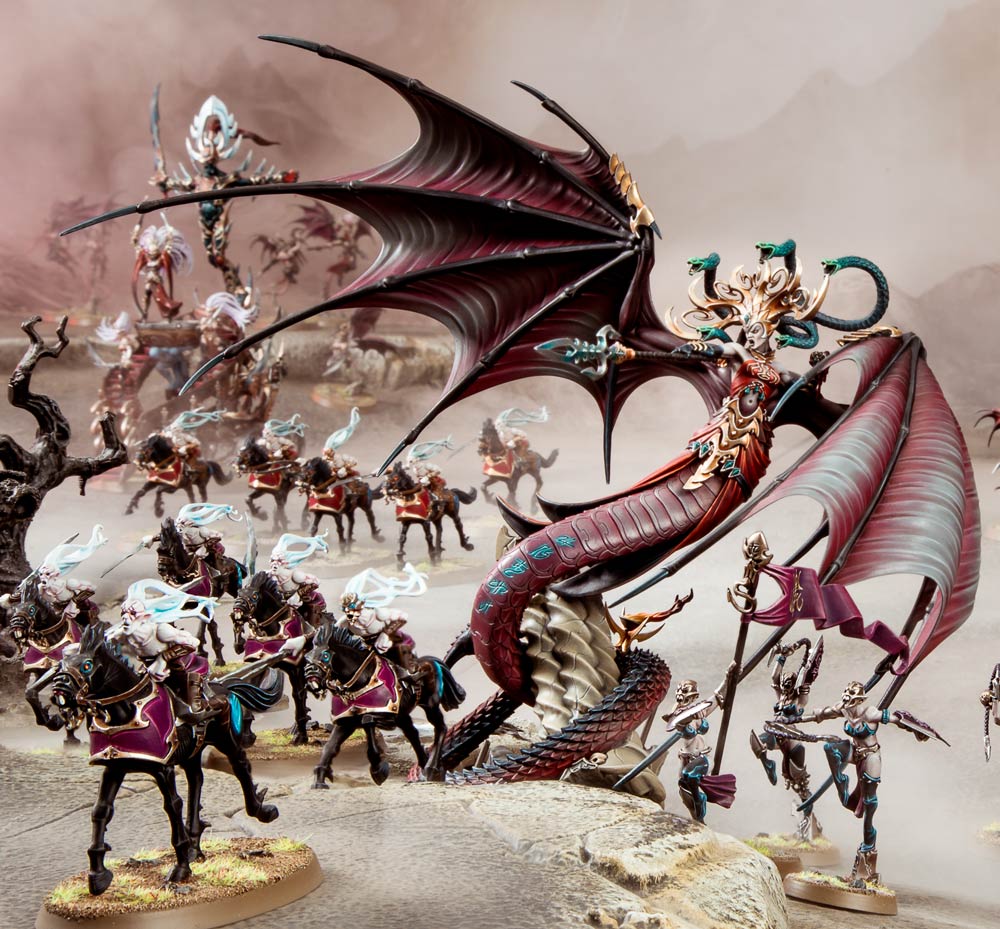 Morathi’s true form is that of a winged serpent, twisted by shadowy magics and the depredations of Slaanesh. In this shape, she is possessed with furious, blinding rage, capable of driving her spear through solid stone or crushing foes to death with her tail.

In game, Morathi’s Shadow Queen form is nothing short of a close combat monster, boasting 12 Wounds and some potent melee attacks.

The Gaze of Morathi is a particularly potent ability, slaying smaller enemies instantly and providing particularly useful for picking off Standard Bearers, Hornblowers and similar models.

While you’ll lose out on your command ability and enhanced powers of sorcery, you may want to consider transforming Morathi as soon as possible to take full advantage of the Iron Heart of Khaine, which she retains. With this in hand, it’ll take a minimum of four turns to kill her off without some special abilities, like Nagash’s Hand of Dust, making her quite possibly the most durable unit in Warhammer Age of Sigmar!

You’ll be able to pre-order Morathi for your own Daughters of Khaine army this weekend – in the meantime, check back tomorrow on Warhammer Community for a closer look at the Melusai, chosen guard and hidden spies of the Shadow Queen…