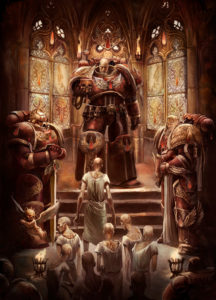 Greetings, Acolytes! Today we will be reviewing history not so ancient quite yet. With the Blood Angels codex on the horizon, many of you may be wondering where the noble Sons of Sanguinius are in the midst of this new era for the Imperium.  Rest assured, the Chief Librarian of Forge the Narrative is here to bring you up to speed with the latest news from Baal and Imperium Nihilus. 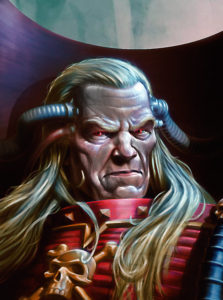 If you even think of a Vampire joke, I’ll know about it…

As this is a lore article, consider this your SPOILER ALERT for events discussed in the novel Devastation of Baal by Guy Haley and the Tyranid Codex. I definitely recommend that any Blood Angel or Tyranid fans especially check this book out! 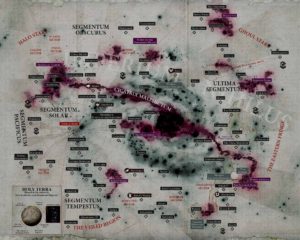 You may notice, but Baal is on the “not Terra” side of the Cicatrix Maledictum…

When we last left the Blood Angels (and what was the case for over a decade of Blood Angels lore), Baal was under siege. The largest Tyranid swarm to ever assault a world was poised to strike at the homeworld of Sanguinius. Even worse, demons were also tearing their way through to the material plane to take a shot at the beleaguered Astartes, led by Kha’Bandha – chiefest Bloodthirster of Khorne. This left us with many questions, and this article should clarify some key points and answer some questions for you about where the Blood Angels were, how they survived, and what their future holds… 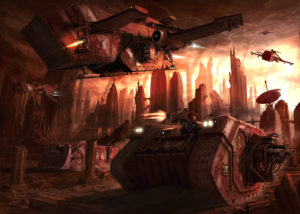 All for wrath, all for ruin, and the world’s ending.

The 40k main rulebook left us with many questions about the semi-serendipitous nature of the Blood Angels’ salvation, and several accusations of heresy have been thrown about. We loyal sons of the Angel know, as we have always known, that the Blood Angels have and will always defy the temptations of the blood god and cast down his servants in the mortal plane. Kha’Bandha’s assault could have been the death knell of the Angel’s last stand, and the fulfillment of a grudge 10,000 years in the making since his dual defeats at the hands of their father. Can we really expect that Kha’Bandha would only have been satisfied with the scraps of the Tyranids left on Baal Primus instead of acting on his need for vengeance and absolution in the sight of his patron deity? 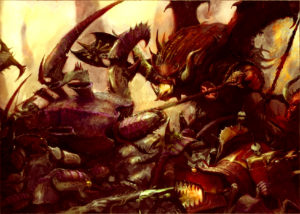 Khorne doesn’t much care for leftovers

Ultimately the greater demon was foiled in his plan to bring the Angels to ruin and wipe the shame of his failure from the galaxy. Through the intervention of mysterious parties, his invasion (while not stopped) was diverted and lessened in power. When Cadia fell and the Cicatrix Maledictum screamed into existence, the mighty champion of Khorne fell weakened to Baal Primus, unable to reach his hated foes. The warp storm had dire consequences for the remaining Tyranids who were swallowed up in its throes, a blow that left the Hive Mind reeling and its fleets easy pickings for the Blood Angels’ beleaguered armada. So, in a way, Cadia’s fall was Baal’s salvation, and Kha’Bandha’s return to the nether is no mark of honor, but of shame. Chaos will rue the day they let the sons of the Angel survive. 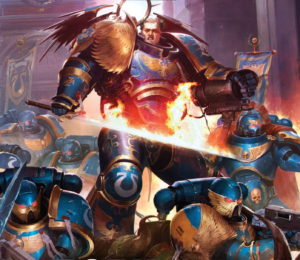 The glory of the Angels is great, yet it would be pride not to admit the dire losses that this largest swarm of Tyranids inflicted on the Blood Angels and their successors. Over 25,000 Astartes rallied at Baal for its defense, and by the end of the battle less than 3,000 remained. Some entire chapters were destroyed either in orbit or on the surface wars across Baal and its moons. That the Indomitus Crusade’s arrival was the seal on the victory of the defense of Baal cannot be disputed, but the final deathblow to the Hive Mind’s horde was not dealt by Guilliman or his armies, but by Dante. 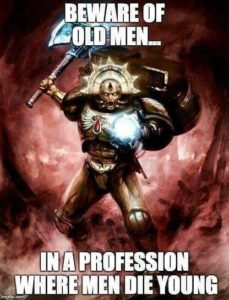 With trillions of Tyranids dead, the surviving Blood Angels made a final push into the remaining swarm of Tyranids upon Baal. Dante led the charge, carried by his rage at the foe’s insults to his home and its murder of his brothers. In a charge worthy of song, the last sons of Sanguinius cut into the heart of the ravening horde until Dante stood alone at the foot of the Swarmlord itself, the last beacon of the Hive Mind’s will. In an epic duel that nearly cost him his life, Dante felled the giant creature (a feat that even Calgar could not match), and with that blow severed the connection between the swarm and its terrible will. By the time Guilliman showed up, he had the disorganized and dilapidated scraps of of the once-mightiest hive fleet invasion in the history of the Imperium to face. Guilliman, upon meeting the wounded but standing Chapter Master of the Blood Angels, declares him his equal and marvels at his accomplishments (and, unsurprisingly, at his age).

Imperium Nihilus, the Twin Curses, and the King of the North 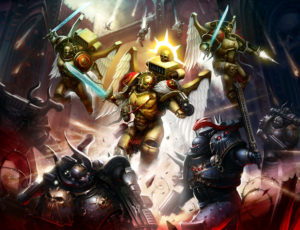 With Baal battered but saved, what happens next with the Blood Angels? The Hive Fleet may be scattered, but the dangers the Imperium faces are not getting better. Guilliman, lord regent, cannot stay on Baal forever. Delivering tens of thousands of Primaris Blood Angels to Baal to restore what has been lost, Guilliman names Dante the commander and Lord of the Imperium Nihilus, and makes Baal the seat of the Imperium’s power in what has become the wild wild west of the galactic north. But what of the flaws? 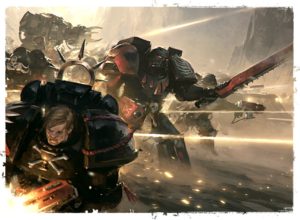 Will they be back in black?

Cawl’s Primaris project claims to have corrected errors in the Blood Angels Geneseed, and indeed, the Blood Angels who survived the Black Crusade’s assault during the Angel’s Blade campaign could discover no trace of either curse in their primaris brethren. Could this be the beginning of a new dawn for the Blood Angels? Sanguinius teaches us to hope, but also to accept our fates. It is this Librarian’s opinion that Cawls’ ‘cures’ cannot-and will not-last forever. The Blood Angels are now tasked to save the half of the galaxy that is fallen to madness, and stand as ever as a beacon of hope to an Imperium drowning in despair. Will they be up to the task? 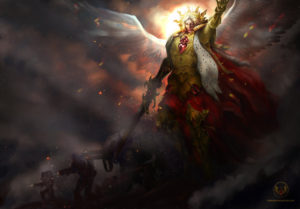 I hope you enjoyed the article. Now you all should be caught up on the Blood Angels lore and ready for what comes next. What do you think fate has in store for the Sons of Sanguinius? Make sure you keep your eyes peeled on Frontline Gaming for news and reviews of the new Blood Angels codex.

6 Responses to “Tomes of the Librarius – Blood Angels & Imperium Nihilus”