Hello everyone, Danny from TFG Radio here, and today, we are going to look at the very first entry (in the rules section at least) of the Tyranid Codex, the mighty Broodlord! You should also go check out Frontline’s expanding Tactics Section for all of your 8th edition needs. Man, this bug got a huge increase thanks to Chapter Approved 2018! 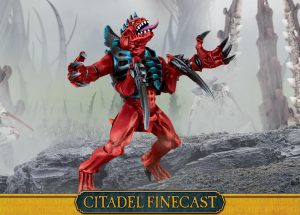 Old school is the best school.

The Broodlord is a vanguard support piece, a bug who makes our best infantry better, but who can still mix it up a bit in the ensuing fisticuffs.  While not an overpowering combatant, the Broodlord can still do work while also providing that sweet, sweet Synapse. 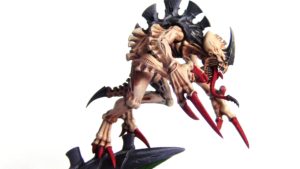 So yah, the Broodlord is very much a fixed tool.  The only customization you can give it would be the various Bio-Artefacts, namely the Ymgarl factor for some variable stats (hey, +1 attack or S doesn’t hurt on this bug) or Maw-Claws of Thyrax for 2+ reroll to hit after it kills a model. You could also slap on Norn Crown, but eh.    I do like the Maw-Claws as a Broodlord will kill a model easy enough, at least most models, and with its native +1 to hit bonus, you are rerolling a 2+ to hit that also ignores a -1 to hit penalty.  Not bad.   Monstrous Rending Claws are amazing for being free, but S5 isn’t all that exciting, but 6 attacks base certainly is. If you do take Ymgarl, you are really hoping for S6 or 7 attacks.

Yep, the standard HQ kit of rules plus some genestealer specific ones.  Synapse and Shadow in the Warp are never bad, especially on a 6 wound character that can easily hide behind a screen, and with movement 8 and the ability to advance and charge, you are going to get that Broodlord deep into the center of the board pretty quick to spread out the aura of SitW.  The 5++ is nice as again, for so long bugs have not had a lot of these, but it is also not something to rely on either.  You really don’t want a Broodlord tanking too many hits.    Of course, every knows and loves the Broodlord for its passive buff to nearby Genestealer units, turning them up to 11, but it never hurts to remember that this also impacts the Broodlord itself.

So what can we do with this focused bug? Well, the truth is that it is best in a support role, and it is great at that.  Genestealers are absolutely bananas, and being able to turn them into WS 2+ super-killers is hard to pass up, especially if you plan on running waves of footslogging genestealers.  You want the Broodlord behind them to make sure they are hitting on 2+, and with its Synapse, you can avoid taking any loses via morale.  The one power is handy, and depending on the build, I’d probably make sure it was Catalyst to turn one unit of 20 Genestealers into our tankiest infantry possible with 20 T4 bugs with a 5++ and a 5+ Feel No Pain.  Another random smite is not too bad at all nor is a deny, again considering that the Broodlord will be advancing up the field, not hiding in the back.  This lets you catch some of the more tricksy psykers that stay away from the main scrum.    Seeing as you will be closer than some other Psykers, Paroxysm is handy against Slaanesh daemons or any other units that get to interrupt combat order, and The Horror is good for ensuring that the very last cultist dies to morale. As a forward support piece, the Broodlord can still fight decently with 6 attacks at S5 that rerolls to wound, which will handle most infantry and even threaten many characters, but don’t expect it to tangle with any big beasties like Roboute or Magnus. 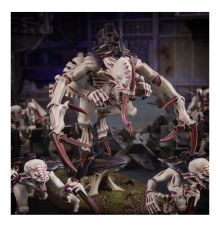 Even without running foot-slugging Genestealers, a Broodlord is great for any infantry wall or screen.  With Heroic Intervention, a Termagant screen that gets charged might suddenly find this big bug backing them up, so don’t forget to keep your Broodlord as forward as possible to be able to jump into fights and do some damage.   You can even do a bit of both and use the Broodlord with a Gant screen to push forward into the center and then on turn 2 or 3, have Genestealers emerge via Trygon or Tyrannocyte within range of the Broody for maximum fun.   Of course, if you don’t want to bother, for a mere 1 CP if you run Jormungandr, you can  have the Broodlord travel with Genestealers that emerge from a Trygon hole. This can be very tough though as that’s only 3 inches to fit Genestealers and the Broodlord, so it might be better to spend 69 points for a unit of Raveners that can shuttle around the Broodlord as otherwise you are going to need to trim Genestealers.   . A fun trick is to pair this with another unit of Genestealers that start on the board and use Metabolic Overdrive or Opportunistic Advance (if Kraken) to rocket that Genestealer unit forward as well, and now you have a unit of Genestealers punching face all over the board, another unit that is right there breathing down the neck of the opponent, waiting for next turn to move in and continue the pressure, and well, if you can get your Broodlord in the middle, that’s all the more money.

Really, the Broodlord is all about support, but in a more aggressive way.  You really should be looking at Kraken for the 3d6, choose the highest advance or Jormungandr for the deployment tricks, but if you are dedicated to going infantry swarm, Hydra isn’t a bad choice either.  While this doesn’t benefit the Broodlord directly, it is our best forward support character which our swarms benefit from immensely.   Behemoth is nice for reroll charges, especially if just taking Broodlords as a quasi-character spam list.  Really, a Broodlord works in just about any Hive Fleet, even Kronos. In a Kronos detachment, a Broodlord makes a good Warlord for that sweet, sweet Mind-Eater aura on a bug that is going to be close to the front lines, and it gives you access to The Deepest Shadow to essentially turn off a psyker for a power.  A Neurothrope is cheaper and more survivable, but a Broodlord is much faster and can still do a little bit of work in melee.

What’s the problem here? Well, Chapter approved 2018 helped solved this. Before CA 2018, 160+ points isn’t cheap, especially for a character that isn’t going to be popping characters and vehicles like candy, but now at 115, that is a fair price for what you get.  If you want cheap synapse and smite, a Neurothrope is likely better (I’ll say this a lot, sadly) and for a budget HQ that is all about maximum points efficiency, a Prime is better.  With 6 attacks, Broody will do a lot of damage to most characters if it can get there, and it will certainly be cleaning up on most units, but it is a glass cannon.  If you are opponent is able to get swings on the Broody, it won’t last too long with its 4+/5++.  While sniper spam isn’t hugely popular, a Broodlord is a bit more vulnerable to it than other Tyranid HQs.  With its relatively low defense, moderate price tag, and solid but not definitive melee ability, the Broodlord is more of an enabler than a doer.   This is its big strike: It is still a middle ground character because it can do several things, but it is not the best at anything it does, and often, you want the best.    Also, if your Broodlord gets exposed or engaged by a unit, it might not last that long.

And due to popular demand, overall, I’d score the Broodlord a respectable 85 out of 100.  Since Genestealers are amazing and Broodlords make Genestealers better, you will see them pop up, and now that they are so cheap, I think you’ll find that out of the box lists will use them far more as hard to target threats that can pop up and do unexpected damage.  Broodlords might be one of the most improved units in our codex thanks to the substantial points drop.

Thanks as always or reading, and of course, check out my homesite at TFG Radio.  We still have plenty of more leader-bugs to go over, and well, I am only just getting started with the codex, so buckle up.  I expect to see plenty of bugs at LVO, and of course, be sure to get those tickets if you haven’t.