Guess who’s back, back again? Danny from TFG Radio and one of your LVO 40k head judges, and yes, the cycle of birth and death begins anew as it is time to go through each and every entry in our brand-spanking new Tyranid Codex for 8th edition! It is only fitting we start with the most iconic leader of the Hive Fleets, the Hive Tyrant! Of course, Frontline has been doing these things for a while, so go check out that Tactics Corner. 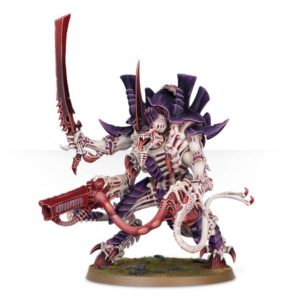 **The article has been updated for Chapter Approved 2018**

The Hive Tyrant is the multi-tool of multi-tools for the HQ slot of Tyranids.  It can punch, it can shoot, it can sing, it can dance, and just about anything else.  Whether you want a gunboat, a melee threat, or a center support node, the Hive Tyrant can do it for you. 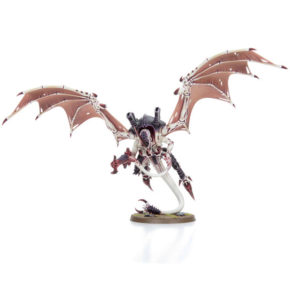 So wow, as always, the Hive Tyrant has a wide variety of kit available.  There are a lot of avenues to explore here, but in the simplest terms, you can make a dakka Flyrant like in 7th, a melee Flyrant, a cheap, spammable melee tyrant, or a long-range shooting walking tyrant. You can also do a combination of the above, and I am intrigued by the possibility of half-shooting, half-fighting Tyrants.

Here’s the crazy thing, all of those are valid.  While one may prove the most efficient, I do think any of those Tyrants can find their way into a list that can do well at an event.  Most people who ripped off their Devourers may be swearing since the dakka-Flyrant is back with a vengeance. 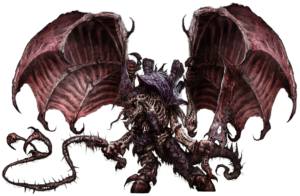 Yep, that is a lot of special rules again, and all of them are money.  The biggest addition in this edition is that Hive Tyrants finally get an invulnerable save, and thank the Hive Ship, it is a 4++.  This really does help answer one of the Bugs’ biggest weaknesses.  SitW is great for helping shut down Smite Spam or even Warp Time as a -1 penalty to cast is significant.  I really enjoy Death Throes as well since a 3 inch aura of D3 mortal wounds can make killing a Tyrant a painful experience.

So, with all of this mind, what can we see here? Let’s start with what we all loved (or not) about 7th edition, the Flyrant!  With the change to Devourers and Deathspitters with their new shiny worms, you may not get the rerolls of the old days, but man, you are pumping out a lot of shots.  With four sets of Devourers with Brainleech, you get 24 shots at S6 or with four sets of Deathspitters with Slimer, you get 12 shots at S7.  That’s a lot of dakka, especially on a BS 3+ bug.   Thankfully, a big change from the Index, there is now a reason to take one over the other.  Devourers are certainly more shots, but at shorter range with no AP, so it becomes a good question of what you want your Flyrant to hunt.  24 S6 shots is great for annihilating small units or taking big bites out of chaff units, but it will struggle against anything with a decent save, and of course, heavier targets like  most vehicles.  Deathspitters are not as mathematically strong as Devourers against most targets as gaining +1 S -1 AP and 6 inches of range does not take enough sting out of losing 12 shots, but with the Flyrants now native ability to deepstrike, that 6 inches of range matters a lot more.  As you have to enter play more than 9 away from enemy models, a Devourer’s range is effectively only 9 inches, so any army that uses chaff or blockers can keep your Flyrant away from any juicy targets, but this is much harder to do with Deathspitters.  Especially against gunline armies, a Flyrant with Deathspitters can drop into a corner and still reach out and give hugs to a valuable unit inside the chaff screen.   For pure kill, Devourers are likely better, but a Deathspitter Flyrant has more flexibility in terms of positioning.

Don’t forget the awesome stratagems like Pathogenic Slime for Dmg 2 Devourer shots, which can start to add up rather quickly or Death Frenzy for another round of shooting if your opponent takes down a Flyrant.  Really, the Devourer is typically the better choice in most cases if you are looking only at math, but I would still give Quad-Deathspitter a chance, especially against any gunline that hides valuable units behind a wall of bodies.

A melee Flyrant is also quite doable now.  You can go super budget  with just double Monstrous Rending Claws and Adrenal Glands for 148 points, and while that is only 4 attacks, they are still S6 AP-3 Dmg D3  with the ability to spike to essentially ignore armor saves and reroll wounds without spending CPs.  You can load up on Scything Talons for +1 attack and reroll ones (which on a healthy tyrant is a 2+ rerollable to hit) or can go Bonesword for +1 attacks at AP-2.  When combined with the Behemoth Hive Fleet and Adrenal Glands, a Flryant has just about a 50% chance of sticking your charge out of reserve with the reroll from Behemoth and +1 from the Adrenal Glands.  Not too bad at all, especially Turn 3 where there is likely more space to land to hunt more vulnerable targets. Don’t forget that as they can FLY, melee Flyrants can jump chaff lines when they move in the movement phase.  That is super helpful, so starting on the board can be a valid choice too, depending on the enemy composition.

A walking Tyrant is also not a bad idea anymore.  At T7 with 12 wounds and a 4++, that is relatively resilient, especially on a model that can be a great synapse lynchpin in the center of your army for under 165 points, who can still lay down a little bit of firepower and have some melee pop with a Heavy Venom Cannon (now cheaper and perhaps worth considering) and Rending Claws.  When you factor in that Tyrant Guard are pretty good in general, especially since they take unsaved wounds, not hits, and when you have a model with a 4++ and perhaps a 6+ Feel No pain from the Leviathan trait or even a 5+ Feel No Pain from Catalyst, you can have a fire magnet that will absorb a lot of punishment since anything that gets through all of that defense just gets shunted to the Tyrant Guard.  You can also go with Jormungandr for a sweet 2+ armor save while you stroll up the field laying down fire, and a 2+/4++ is pretty nasty, especially with the ever ubiquitous Malanthrope/Venomthrope throwing out a -1 to hit.

Even dirt cheap at 148 for double Rending Claws and Adrenal Glands, a Hive Tyrant running up the board can be legitimately worrisome, especially since they are still a level 2 psyker who can smite and deny.  If you go this route, Behemoth is nice for reroll charges, or Leviathan for a free 6+ Feel No Pain.   Walking Tyrants can be somewhat spammable simply for the fact that they are cheap, resilient, and can do a lot of damage, and they can spread that sweet Shadow In The Warp around the board.  You can also go with Kraken for the 3d6 pick the highest advance roll to make sure that you are flying up that board without wings, and a few cheap melee Tyrants backed by swarming Genestealers presents some target overload for your opponent.

So, what’s the downside here? Well, not a whole lot really, but the Tyrant is far from “broken”.  Thanks to the rule of 3, the  all Flyrant list is gone, but 3 flyrants is still a lot of dakka. Pure dakka-flyrants do not fight very well at all with only 4 attacks at S6 and no AP, so they really aren’t doing much to anybody, and well, that’s not their job.  They also do not have the old Flyer protections, which is really what made the 7th edition Flyrant so powerful.    Should you take 3 every game? No, but one or two can be excellent flankers that can drop in from unexpected angles and bring some decent firepower to bear without worrying about being shot off the board before engaging. 3 can work, but that is starting to get pricey.

Tyrants can be targeted without restriction as they are W12 and even flying, they can be assaulted and shot without issue, which is important to keep in mind.  With the loss of an attack down to 4 (plus the tail, but the tail is…well, it’s there), their melee output isn’t insane, and at S6, they are wounding most heavy targets on 5s, so they are a bit in the damned middle ground.  They don’t pump out enough melee attacks to really threaten chaff, and they don’t hit hard enough with their attacks to threaten big targets.  Tyrants require a bit of finesse to make sure they are hitting the right targets as sending a melee Tyrant into a conscript blob is a bit foolish, and don’t expect even two Tyrants to take down Magnus in a fight.  These aren’t kisses of death by any means, but it does keep Tyrants from being too overpowered.  They are excellent, excellent units, but with the changes to Broodlords, who are now far cheaper, the Flyrant might be the most optimal build as a melee, walking tyrant is far less survivable than a Broodlord for just about the same level of offense. Still, no HQ is as customizable as our Hive Tyrants.

Really, the Tyrant is everything and everywhere you want it to be.  Whether as a dedicated gunboat, a shock assault monster, a backline heavy cannon, or just a support piece, the Tyrant is still a go-to choice for Tyranids.  While you may not want 3 anymore every game, you still want some, and heck, since they are cheaper now than they were, you may end up with 3 depending on how you are building them.

I’d score the Hive Tyrant a solid 85 out of 100.  You can certainly see them in a purely competitive build, at least one, but a competitive Tyranid army doesn’t require one.

Thanks as always for reading, and be sure to check out my home site, TFG Radio, and remember: come say hi if you’re ever at LVO. I’ll be there.