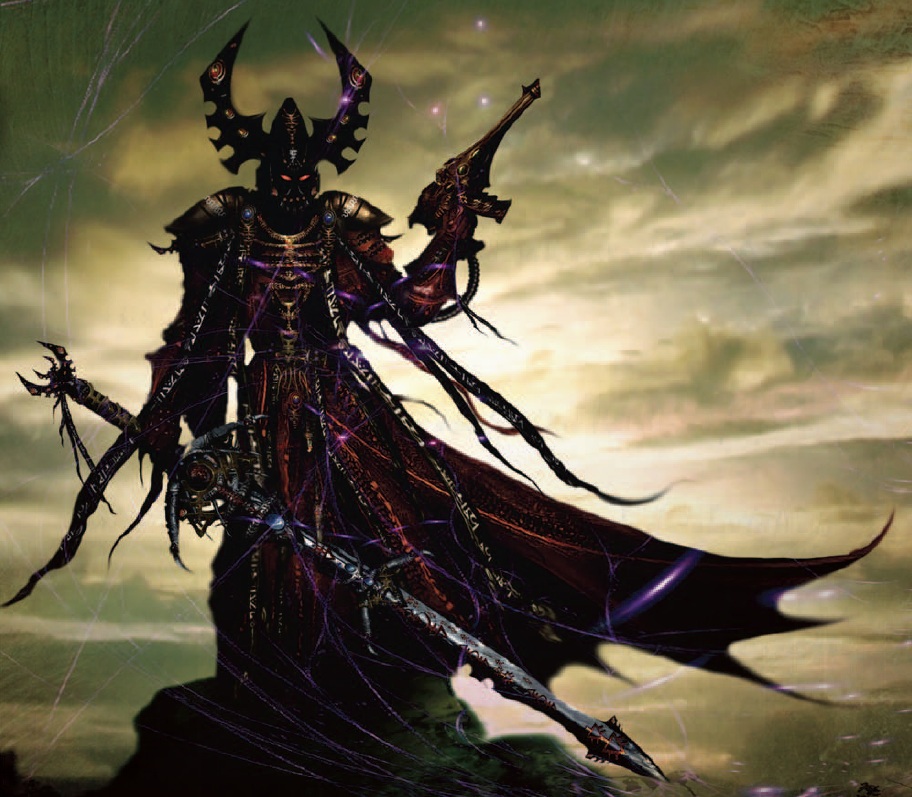 I have gotten a few emails from Eldar players asking about the Warlock and why you would take one over a Spiritseer? Well, here’s a quick tactica and answer for you! For more fun and informative articles, check out the Tactics Corner!

So the basic question here is why take a Warlock who weighs in at 35pts and has 2 wounds over the Spiritseer who is 45pts and has 4 wounds. The rest of their gear is very similar with a 4++, weapons that wound on a 2+ and do multiple damage, etc. They are both HQs (which geez, you have a cheap HQ psyker in either flavor for very few points! That’s already better than most factions, lol) but the Spiritseer also has a buff for Wraith Construct units and the Warlock not only doesn’t but also has a limitation of a 9″ range on Smite. 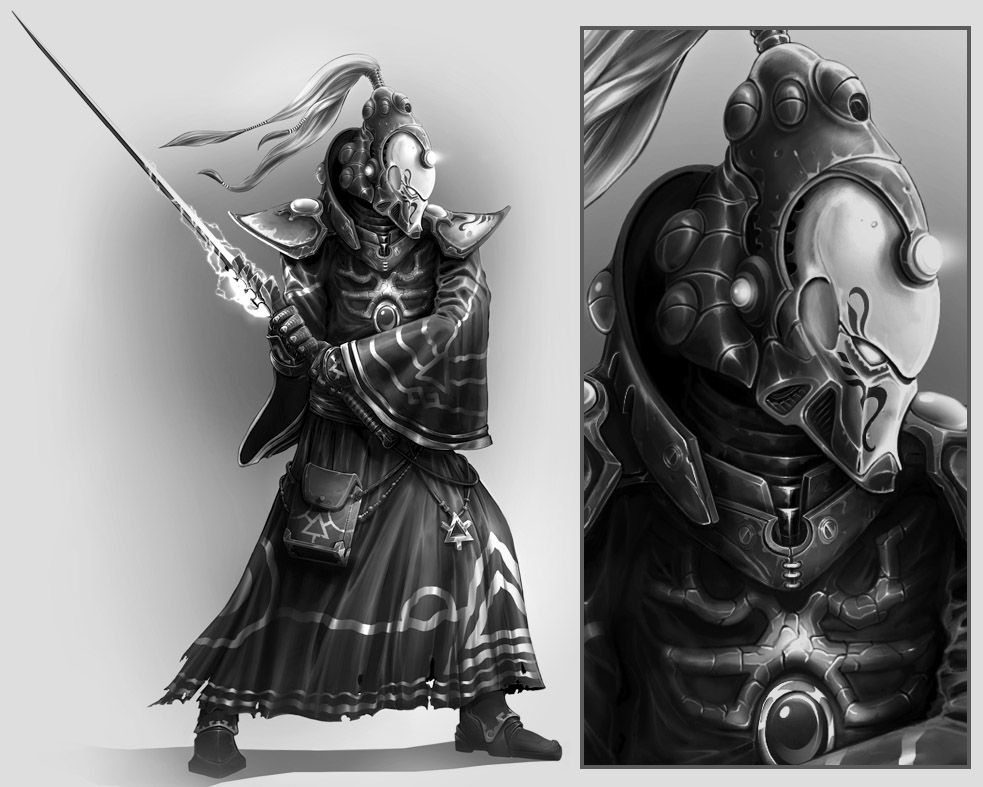 Well, if you are only looking at those stats, you wouldn’t take the Warlock! The Spiritseer is strictly better from that perspective, however, this is 8th edition and you if you only look at a unit’s profile to decide if it is the “best” choice or not, you are limiting yourself in a big way.

Stratagems are a critical part of the game now and in many ways they define how you build your list in 8th. If you are not taking full advantage of them, you are playing them game with one arm tied behind your back. There are tthree stratagems that make a HUGE difference between the Spiritseer and Warlock units. These are Seer Council and Concordance of Power and to a lesser extent, Unparalleled Mastery. Allow me to explain why.

Eldar Psychic Powers are incredibly good. Runes of Battle is in my mind, the best school of powers in the game. You get incredibly good abilities that have good range and can be both a buff AND a de-buff! It’s ridiculously powerful and versatile. However, your access to these powers is through the Warlock, Warlock Conclave (and Bike versions) and Spiritseer. As the most popular are almost all Warp Charge 7, they can be difficult to cast successfully. As you can only attempt each power once in matched play per psychic phase, and these powers are often central to your core strategies (Quicken and Protect in particular), on those critical turns when you make your big play, you NEED them to go off. It can be the difference between winning and losing a game. The Seer Council stratagem gives the Warlock and Farseer units +1 to cast for the phase. This may not seem like much, but it makes a big difference with a WC 7 power.

When you roll 2D6, there are 36 possible combinations of numbers as shown above. 5 of those add up to 6: 1 and 5, 5 and 1, 2 and 4, 4 and 2, 3 and 3. That is obviously 5/36 possible combinations or a 13.9% increase in the odds of getting the power off. As an example to illustrate, it is very close to what a +1 to cast would be if you only took Physic Checks on 1D6 (a 16.7% increase). Or, a +1 to an armor save, for example, going from a 4+ to a 3+. That may help to put it in perspective. This is further boosted by a CP re-roll or with the Biel-Tan relic, the Spirit Stone of Anath’Lan, which allows you to re-roll failed psychic checks to increase the odds of casting and to help avoid perils (yet another reason why I love Biel-Tan, as I know I have very good odds of getting those critical powers off when I need them!). Similarly you can use the Seer of the Shifting Vector Warlod Trait to do the same thing, but I prefer Biel-Tan personally as it frees me up to take the awesome Natural Leader Warlord Trait to twin-link a unit.

However, this benefit is twofold as a +1 to cast means not only lowering the minimum casting threshold but also increasing your odds of resisting deny the witch. If you roll say, a 7 or 8 it goes up to an 8 or 9, making it much harder to stop. Further, the Farseer will also benefit and as many of their powers are also typically WC 7, you increase the odds of getting Doom (typically the critical Farseer power), Fortune, Guide, etc. off. And as the Farseer can cast two powers (three with Eldrad) the benefit again comes in to play. You can further press this advantage with the Unparalleled Mastery stratagem to cast a third power with your Farseer, typically this will be Smite, but as you are already benefiting from the +1, and if you are in a position where you really need to deal more damage, go for it! It also increases the odds of getting the D6 Mortal Wound Smite off, too (possibly getting a +2 with the Ulthwe relic). 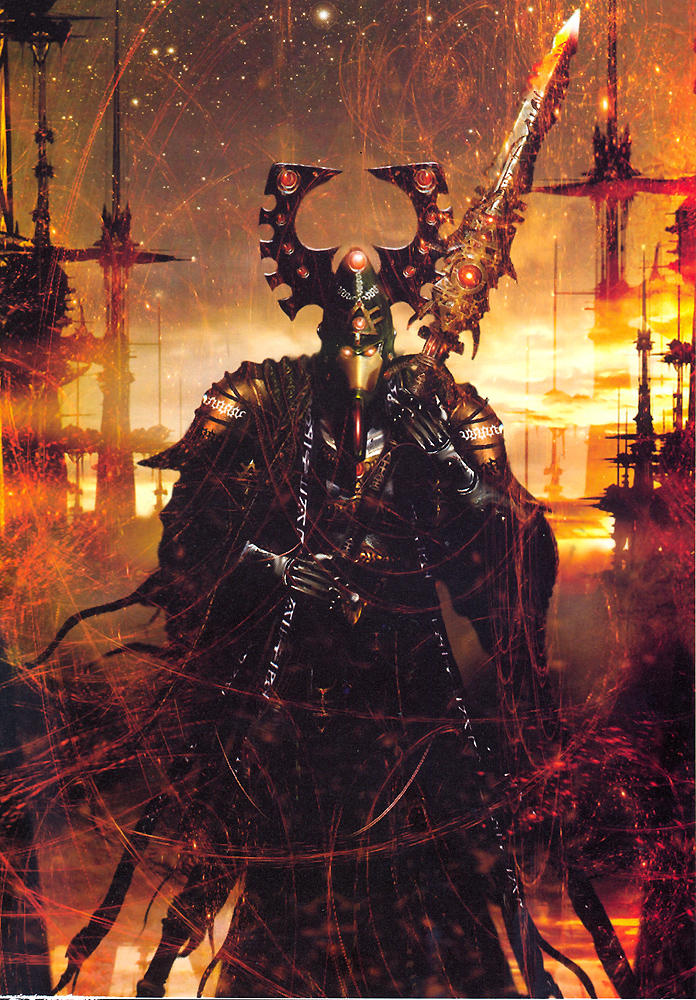 This is even further enhanced when you use a Warlock Conclave. Now, they do lose the Character keyword protection (and thus cannot take a Relic if you were doing so), and do cost more points, but if you opted for it the benefits are significant. For one, you pay less points per model at 30 each. For two, if you opt for a unit of 4, they can cast twice and deny twice, too. And remember, you can cast both the buff/de-buff version of a Runes of Battle power, meaning you can both lower an enemy unit’s saves by 1 and buff one of your unit’s saves by 1 as an example. This also means that like the Farseer, you get double the benefit (or hell, go for 7+ in the unit and get three!) from the Seer Council Stratagem which increases the efficiency of that CP spent on it. You can further opt to use the Concordance of Power stratagem to double the range of the power, which is available only to the Conclave. Now, that may not sound super exciting but there are a few things many people miss. For one, you don’t spend the CP unless you successfully cast the power. No risk of wasting your CP. Once manifested and the range doubled, you then pick your target which at 36″ range, opens up most of the table. Why this is significant is twofold. For one, Runes of Battle powers are all 18″ range, well within Deny the Witch range of 24″. However, 36″ is clearly bigger than 24″, lol, and this means you can cast a critical debuff from outside of your opponent’s range to stop it. Now, imagine if you will, hitting someone like Magnus the Red with Jinx on the top of turn 1, dropping him to a 5++. Now imagine shooting him with lots of Dark Reapers and/or Fire Prisms. Now imagine him dying like a punk and your opponent letting a single, sad tear roll down their cheek, because that is what will happen, lol! This is just one of many potentially devastating powers you can hit your opponent with, deep into their lines, or buff one of your own units with that looked like they may have been out of range of support. 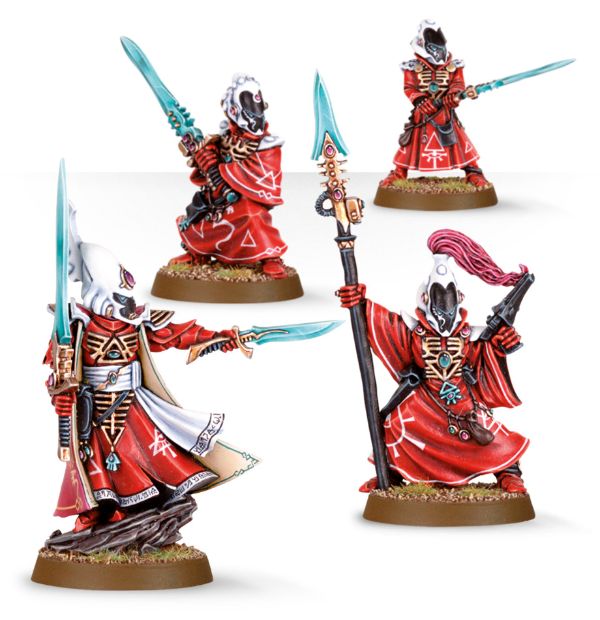 All of these amazing and wonderful things you can only do with Warlocks. And, they aren’t bad in combat, either. 2 attacks each, wounding on a 2+ and doing D3 damage a pop, which can be boosted quite a bit with the myriad ways to increase their number of attacks, granting them AP-1, etc. available to Eldar. The best part is that Runes of Battle powers don’t require LoS, so you can do it all form hiding…very Eldarish! These powers and combos are sometimes subtle and may not jump out at you right away. You have to get some reps in with the army to really master it, but that is fitting for the Eldar. If you just want to slap Warp Spiders and Scat Packs on the table and win as was the case in 7th, well, I don’t know what to tell you, haha. Spam Dark Reapers and you get close to that I guess, but the army is about combos and finesse as it should be. Jokes aside, the Warlock has a ton to offer the canny Eldar player if they look for it. I always take at least a single Warlock just for the Seer Council stratagem as I have found over and over again that while I may only use it once in a game, that turn that I am committing to the attack or have to stop my opponent’s attack and need some key powers to go off successfully, he becomes the lynchpin to bringing me success. I tend to run 1 Farseer, 1 Warlock and 1 Spiritseer or just a Farseer and Warlock Conclave of 4-5 models as they all give me benefits that I love. With or without Bikes I find comes down to the individual preference and army construction. I tend to play on foot as I like Footdar, but also to save points. If your army needs the speed or you want more durability, go with the Bikes.

Hope that helps! What have you all found works best when using the Eldar Psykers?