Chaos Space Marines have access to a wider array of special rules than ever before- if you’re confused as to what your army can do, or are looking for help in understanding the faction in order to defeat their evil, read on!

So the Chaos Marines codex- excuse me, the Heretic Astartes– benefit from a number of different special rules depending on your army composition; some of these are innate to most or all of the units in the codex, while others require you to build your army in specific ways. However, unlike the old formation rules and whatnot, no specific units are required- 8th edition is much more friendly in that respect, asking only that you try to cohere to a more general overall plan.

Although written specifically for the codex units, nearly all of these special rules apply equally to Forge World units as well, since they typically have the same keywords and abilities as their GW counterparts. 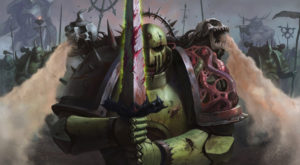 Death to the False Emperor

The most widespread of the abilities, Death to the False Emperor is possessed by almost every CSM model that isn’t a vehicle, though there are a handful of exceptions (like Cultists.) Any time a model with the rule attacks an Imperial unit during the Fight phase, every hit roll of 6+ grants a bonus attack that cannot chain into any further bonus attacks. Although not as broad-reaching as some special rules, DttFE is a surprisingly-good ability, since Imperial armies are quite common these days and bonus attacks can help chew through those hordes of Conscripts or other screening units so that you can get at the juicy meat of the list hiding behind them.

A couple important points deserve note with this ability. First off, it triggers from any attack made during the Fight phase, not just close combat attacks- so a unit like Noise Marines that can potentially shoot when they are killed has the ability to get bonus shots. Second, like all abilities you apply modifiers before checking to see whether it triggers- so Prescience (+1 to hit) will make it trigger on die rolls of a 5 or better, as can other bonuses. Finally, certain units (like Mortarion) have the ability to make multiple hit rolls off a single attack, and for these units rolling a 6+ will grant them multiple “bonus” rolls, which can get gross pretty quickly.

Death to the False Emperor isn’t going to be an ability that changes the way you play games, but it can be a very useful (and fluffy!) tool to have in your arsenal. Your units don’t really pay any points for it, so even when it doesn’t come up there’s no real downside to having it. And when it does work, the high volume of attacks on many Chaos units lets you really lay down some serious hurt, albeit in a very random fashion. 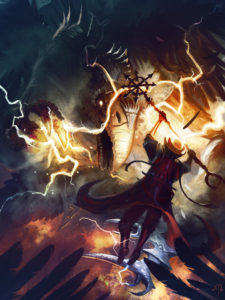 Though technically not possessed by Chaos Marine characters (as it is an ability present on Daemons, not on them), it functionally is something that they have rather than vice versa. Daemonic Ritual lets you summon reinforcements to the battlefield by giving up a character’s movement for a turn, though they can act normally (shooting, assaulting, etc) later in the turn. Rolling 1-3 dice and looking for a result equal to or better than the power level of the unit you want to summon is a bit unreliable, but since you can bring them down anywhere within 12″ of you (and more than 9″ from the enemy), you have a lot of flexibility in what you want.

Although many players are leery of leaving a bunch of points off their list to use with reinforcements (since it means that you will have fewer command points available), the option to bring in whatever daemons you want is a very useful tool to have, even if it occasionally does a mortal wound to your character. Better yet, any characters that you summon with the ability can themselves summon more units on later turns (though not the turn they arrive), allowing you to chain down tons of units in short order if the enemy doesn’t start killing things quick.

Although I wouldn’t typically hold a lot of points in reserve for use with summoning, having somewhere between 70 and 200pts set aside gives you a solid pool to work with that can bring in various types of units as needed. You’ll usually want to have a couple different “sets” of units that you intend to call up so that you don’t waste points- try to find numbers that are close to multiple possible summonings, where possible. 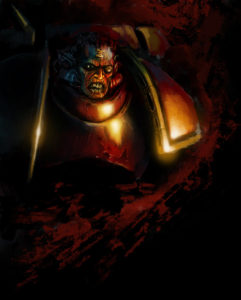 Despoilers of the Galaxy

The standard “Objective Secured” rule that CSM get, Despoilers applies to all troops in a Chaos Marines detachment only- so if you mix in any Daemons or Renegades, you won’t benefit from it. (Note that the various Daemon troops listed in the CSM codex are not CSM units, as they do not have the Heretic Astartes faction.) However, you can still summon additional units to the field without penalty, or bring along additional detachments of other factions if you want- you just can mix them as part of a CSM detachment.

Controlling an objective regardless of the number of enemy models is a handy ability to be sure, and all the more so with the new ITC Championships missions that heavily reward taking and holding objectives throughout the game. While Chaos Marines certainly have the ability to put a lot of bodies on the field via Cultists, allowing your other troops to hold an objective with confidence is a very nice thing to have as well. Shifting units of Plague or Noise Marines (or Khorne Berzerkers!) off an objective can be a pretty rough job sometimes, so making it so they have to kill every one of your models to do so is very useful.

Some players like to downplay the ObSec rules like Despoilers because most armies will benefit from them- and it’s true, that if two opposing units both have ObSec rules then they essentially cancel out and the objective is controlled in the normal fashion. But since these rules are granted only to troops, it still means that you can easily “steal” an objective from enemy Elite, Fast Attack, or Heavy Support units, which still show up in armies in abundance. 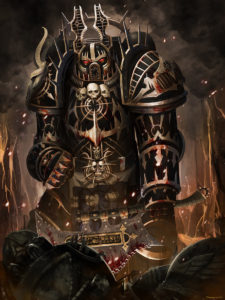 Last but most certainly not least, we have the Legion traits. So long as your detachment is composed only of units from a particular Legion (ignoring any Fallen units and Fabius Bile), all Infantry and Biker models as well as all Helbrutes benefit from the effects of a Legion trait. We’ve reviewed the various Legions extensively in other articles so I will only be making a very brief survey of them here- but if you’re interested, there’s certainly more in-depth information available in both the descriptions of the Legions themselves as well as in the individual unit summaries.

Alpha Legion, fittingly enough, is probably the best of them so far. -1 to hitat ranged beyond 12″ may not seem like a lot, but mathematically it is absolutely huge and stacked with other penalities it can become devastating. In addition, they get an excellent warlord trait, a great relic, and the best of the stratagems, putting them in a commanding lead over all of the others.

Emperor’s Children are my personal favorite, and they get a twofold bonus: all units from their Legion strike first in combats (exactly as if they had charged), and they get Noise Marines as a troop unit (as per the FAQ.) This combination gives them an excellent hybrid shooting/melee functionality, not to mention some of the strongest shooting troops around.

Renegades may be lacking in some other areas, but their Legion ability is duly impressive- their units can charge after advancing. This gives them a much longer threat range than one might otherwise assume and can enable units like Bikes to really cross the table in record time in order to ravage the enemy lines.

Night Lords, although often overlooked, get a trait that is increasing in relevance with each passing day as GW removes ways to ignore morale. Getting multiple units within range of the enemy can sometimes be tricky, but when you do it can be absolutely devastating- killing one Terminator and forcing three more to flee from the squad is no joke!

The World Eaters bonus is pretty straightforward: +1 Attack on the tur you charged. Particularly good for Berzerkers (who get to fight twice) and Cultists (who start off with a low number of attacks) as seems fitting, but any unit can take advantage of it to get stuck in and lay some damage down on the enemy. Like their Slaaneshi brethren, they can take Berzerkers as troop units, opening up more options for list building.

Black Legion‘s bonus isn’t always thrilling, but it’s one of those ones that will stick in the background a lot of the time making you better. +1 Leadership to all units gives you more “safe” numbers for losing models from small squads before needing to worry about morale and even when you do fail will mitigate some of the damage. Being able to advance and shoot rapid fire weapons as though they were assault is also a decent plus given the number of bolters, combi-bolters, and similar weapons you can bring to the table.

Iron Warriors get to ignore all cover bonuses for enemy models; this can be nice if you’re putting some basic Boltguns into troops sitting in cover, but a lot of the time it won’t make much of a difference, so overall it’s a rather lackluster choice. Vehicles and monsters will very rarely benefit from cover (and even when they do, the high AP values of the weapons you use to kill them make it largely irrelevant), and those are typically the units you will struggle to be eliminating.

Word bearers come in a sad, solemn last place for the Legions with the ability to reroll failed morale checks. Almost always worse than the Black Legion’s bonus to Leadership and with no secondary ability to compensate, unless you are a hardcore fluff enthusiast you should avoid choosing Word Bearers at all costs. 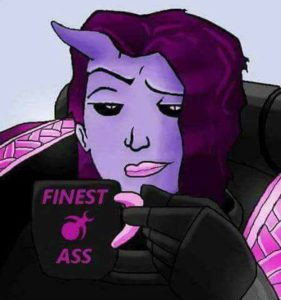 The Chaos Marine traits are a solid set of upgrades that can really help give an army an edge- especially in combination with the warlord traits, stratagems, and relics, they strongly encourage you to bring a “pure” detachment of Chaos Marines in order to take advantage of the many abilities they have on offer. If you’ve been depressed over the past several editions about the lackluster performance of Chaos- or of “pseudo-Chaos” armies that nominally represent them but only have a small handful of their units included- then your wait is finally over, because Chaos Marines are without a doubt one of the strongest contenders for the top slots in the game these days.

As always, remember that you can buy Games Workshop and other products from the Frontline Gaming Store at great discounts every day.