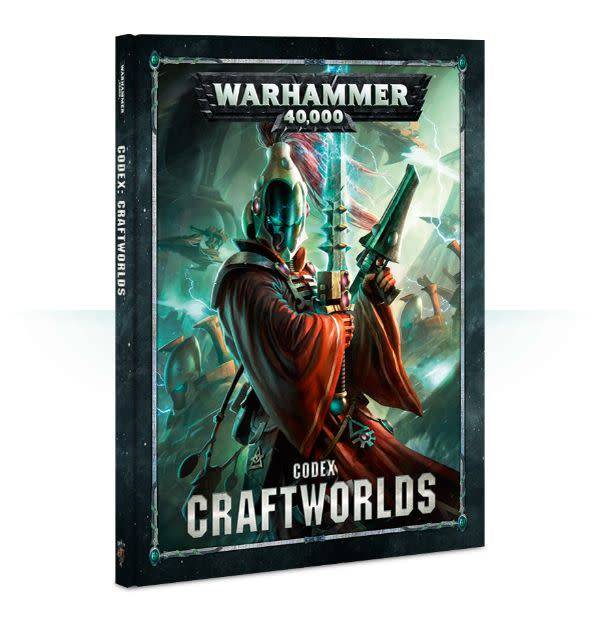 And as always, you can purchase this and other Games Workshop products from Frontline Gaming’s web-cart at a discount every day, with FREE shipping within the continental USA for orders $99 and up!

Codex: Craftworlds is a seriously awesome book. Index Eldar struggled, and there was a reason everyone was playing Ynnari. Now however, you can play a specific Craftworld and not only compete but kick ass. Beyond the obvious points drops, there are so many combos and layered unit interactions in it that it is hard to contain my enthusiasm. This is a codex that provides tremendous depth and opportunities for mastery. Every time you play, you will see more and more potential combinations giving it a very nuanced and subtle feel with a multitude of play style options, which is perfect for Eldar, in my opinion. 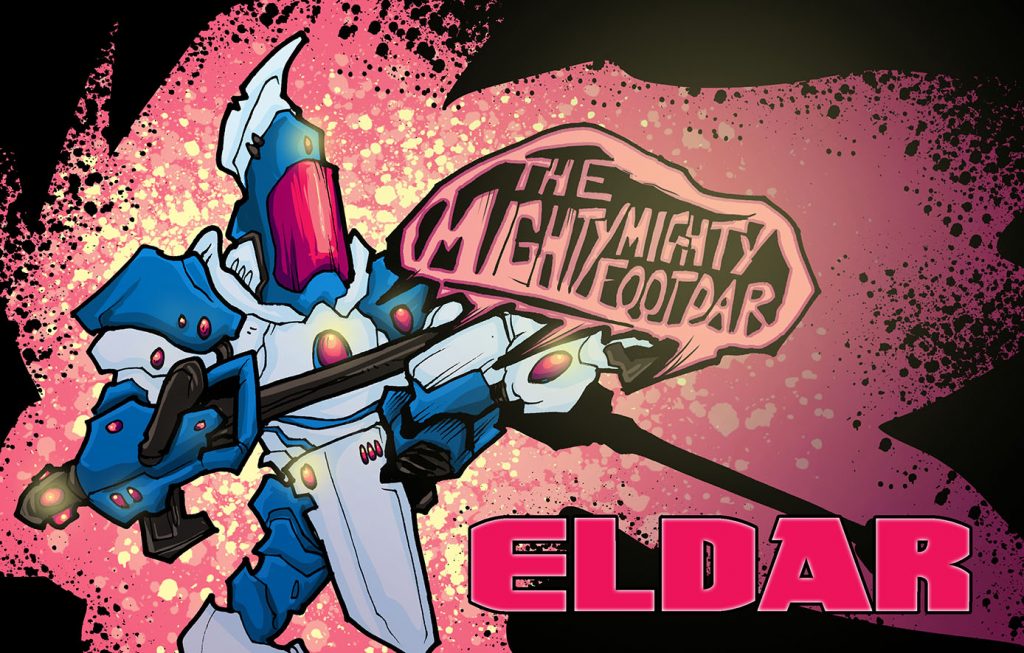 These are fun abilities. Ancient Doom obviously doesn’t kick in that frequently (but is great when it does), however, Battle Focus is bad ass. I love it, the extreme mobility of the Eldar army is just a blast to experience. Path of Command is also very nice, regaining CP and a re-roll aura hardly require explanation and give you a big incentive to use an Autarch. The only problem I find myself having is which awesome HQ to take! Eldar have so many incredible choices available to them. My lists often have 4+ HQs in them as they all bring so much to the table. 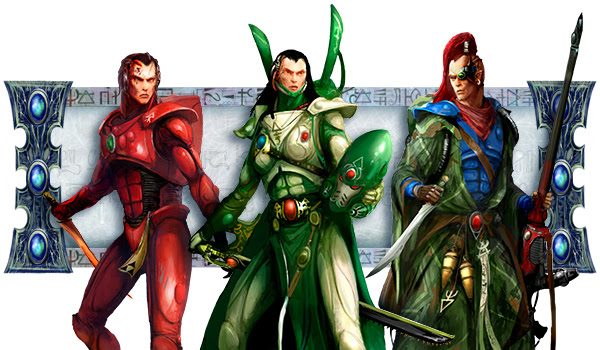 Eldar have some very solid Warlord Traits available to them.

Obviously, those are pretty dang good. I tend to go with Falcon’s Swiftness on my Avatar as boosting him up to a 9″ move to speed him up which is very powerful in my list, but they are all very good. Mark of the Incomparable Hunter on an Autarch with Fusion Pistol, while short ranged, can be devastating.

And important to note: Phoenix Lords cannot take Warlord Traits. I often find giving it to the Farseer is a solid bet as they tend to not die very frequently in their support role.

Ambush of Blades has tremendous potential, too. I like to use Storm Guardians as a screen unit in my Eldar armies and with this Warlord Trait, and some additional buffs such as the Enhance or Empower psychic powers, plus re-rolls from an Autarch, combined with Doom, and even a stratagem like Supreme Disdain and they actually become deadly combatants! With a full unit of 20, they put out 40 attacks potentially hitting on 2’s with re-rolls, wounding T4 targets on a 4+, becoming rend -1 on a 5+ to hit which also generate additional attacks due to Supreme Disdain, and re-rolling failed wound rolls. You will be shocked at how quickly this wimpy unit all of a sudden starts chopping things to bits! That is a common theme in the Carftworlds Codex. It is all about finding those synergies that take a unit from good to amazing. We’ll be sure to take a look at more of them as we go! 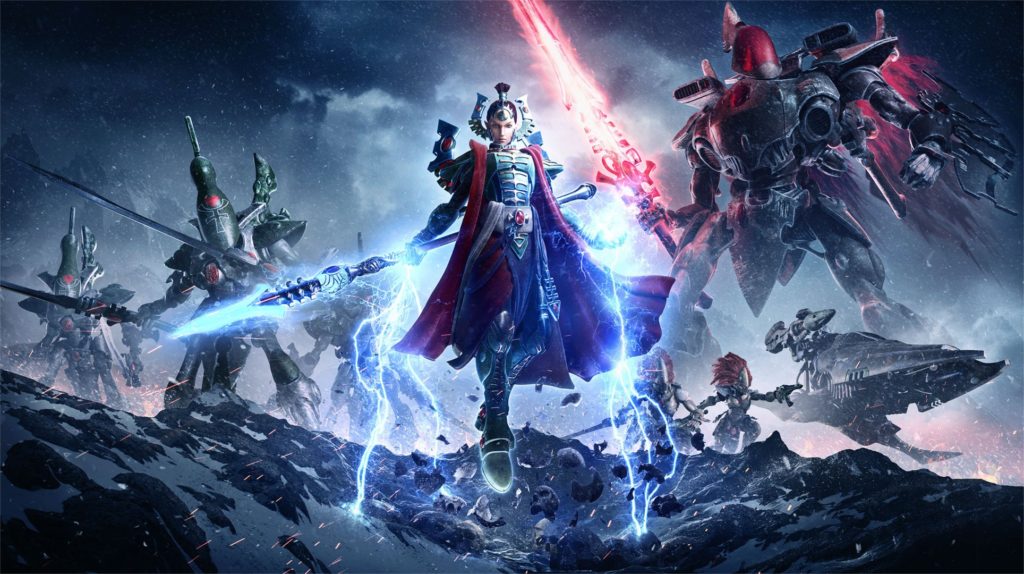 There are loads of absolutely awesome stratagems in the Craftworlds Codex. As stated numerous times in previous, similar articles, 8th ed 40k lists will often be built around their stratagems and Eldar are no exception. They have some fantastic options in this regard. Let’s take a look at some of my favorite options! 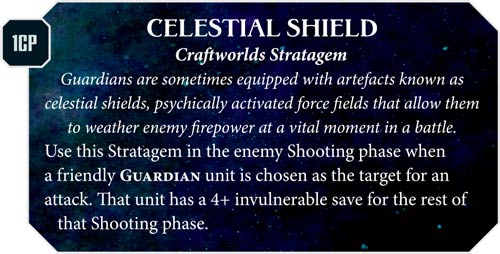 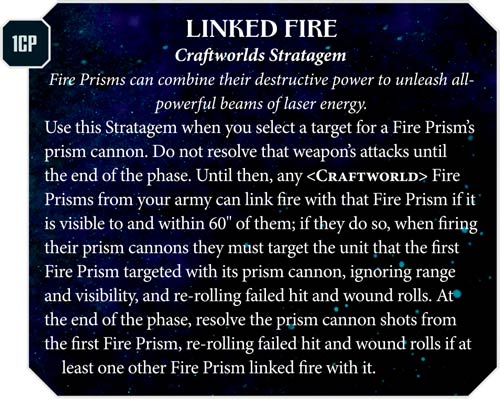 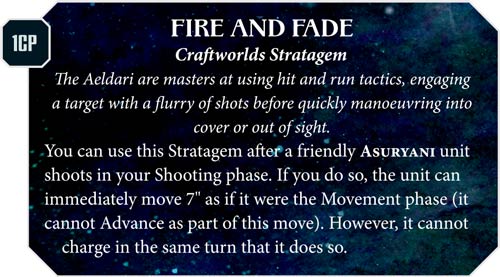 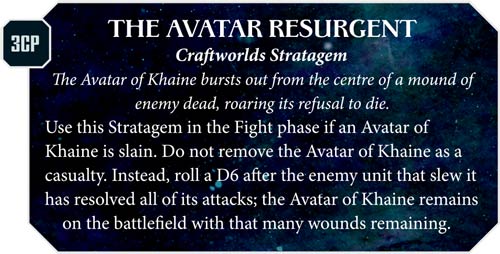 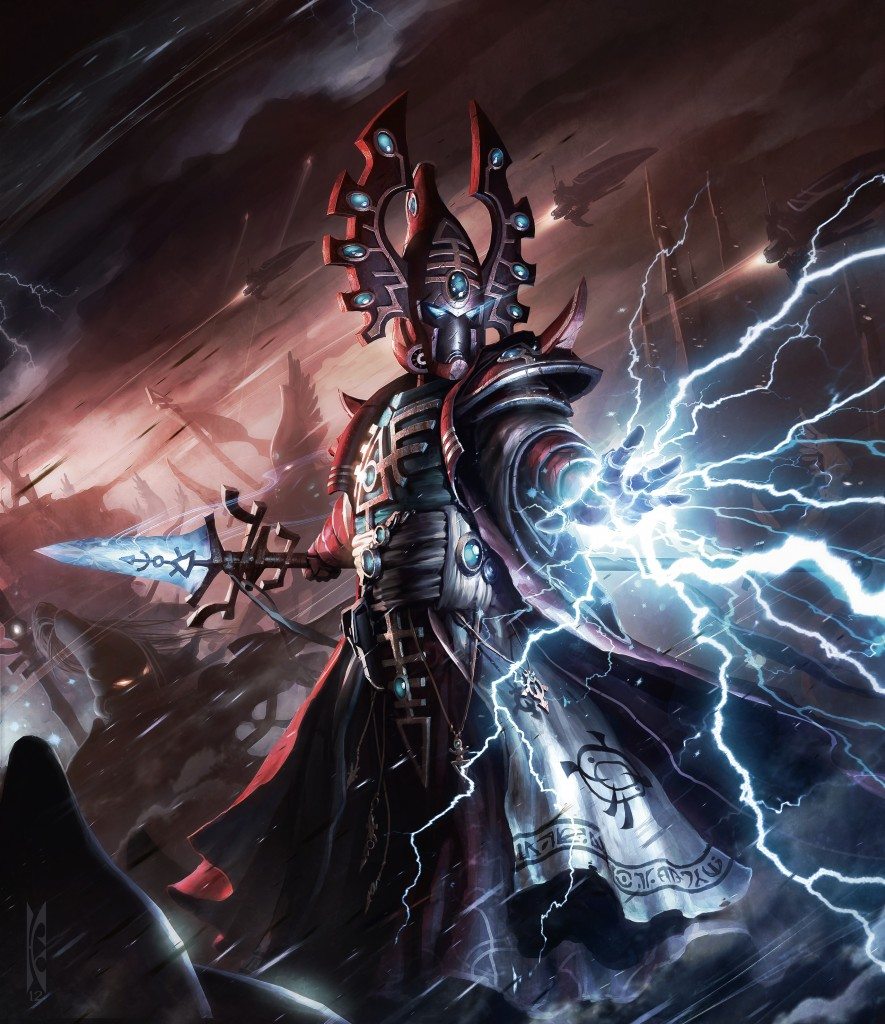 Eldar have a blistering array of incredible Psychic powers available to them with essentially 18 different powers to choose from! These are quite simply amazing abilities. Runes of Battle especially having game changing powers in it. 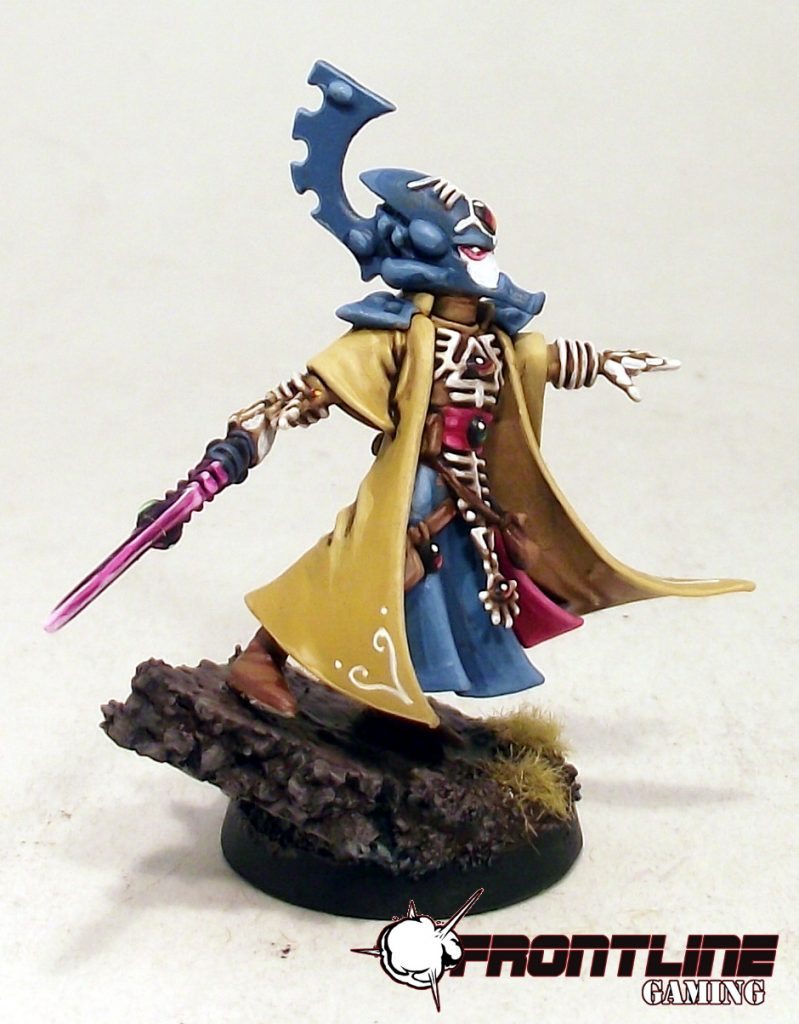 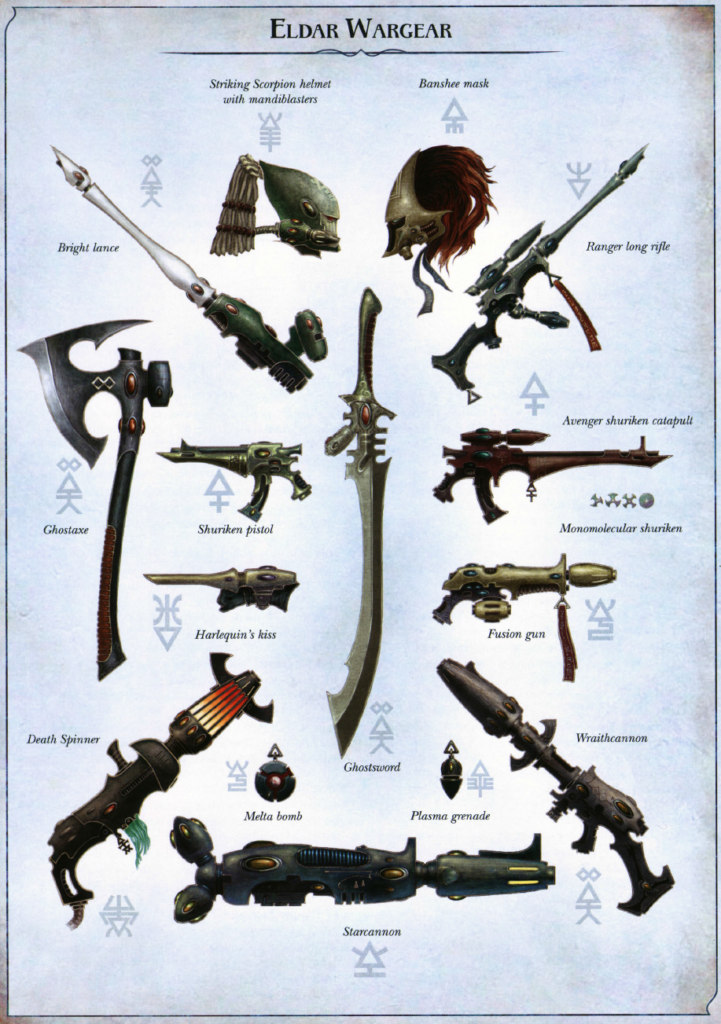 Alaitoc is the Craftworld drawing the most attention online and for good reason, the -1 to hit ability for units 12″ or more away is very powerful, especially when combined with some of the other ways to stack -1 to hit on units, such as is native to Rangers and the Conceal power which gives a unit an additional -1 to hit for a potential -3 to hit! This can make your army incredibly difficult to take on in the shooting phase, especially for armies like Astra Militarum. Although, remember, this is no silver bullet as they can simply run up and punch you in the face, too! Eldar are squishy and even a Guardsman is a threat to you in melee. And as this will often be the only viable strategy left to them, you can count on this being what they do so bring some counter assault units.

However, this is a great baseline ability and helps to mitigate the alpha strike quite a bit and works well with seriously any army archetype. I don’t rate it quite as high personally as Eldar have so many ways to stay off of the table and often want to get close to deal maximum damage, but that is just me. What it does though is establish a baseline for an army that should win a long ranged shoot-out against a similar army due to the fact that you simply are harder to hit. We will be seeing a LOT of Aliatoc armies in the months to come. 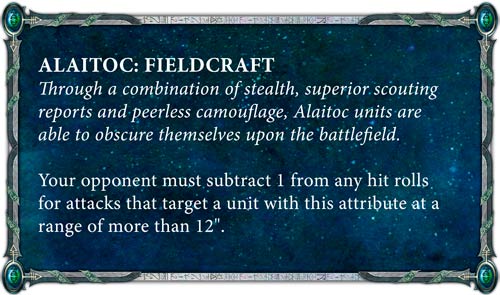 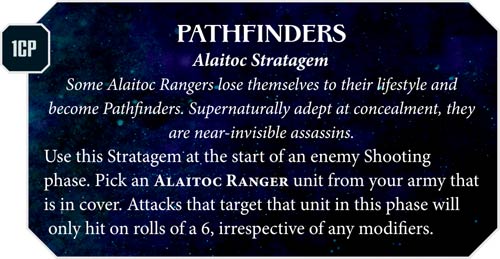 Biel-Tan is my favorite Craftworld package for a number of reasons. For one, my play-style and preference for using infantry and the fact that I love Aspect Warriors means they are my go to choice as that is what Biel-Tan is about. Plus, I use loads of Dire Avengers and other Shuriken weapon toting units that tend to get in very close to the enemy where something like the Alaitoc bonus would be less effective for my play-style. As Eldar have a plethora of ways to deliver themselves into close ranged battles, the need to withstand an alpha strike isn’t so important as they can simple stay off of the table.

Beyond my personal preference though, Biel-Tan has a lot to offer. The re-rolls of 1 to hit with Shuriken weapons is solid and the +1 leadership for Aspect Warriors helps quite a bit if you are running an MSU play-style as you just don’t have to worry about morale in most instances. Their Warlord Trait is one of the strongest I’ve seen and their unique Stratagem and relics are also very good.

This army compliments a combined arms strategy quite well and as all of the various Aspect Warriors have gotten boosted across the board. You can really create a fun and flexible army using Biel-Tan as a core. As units self-buff in most instances, they can operate solo or you can string together some crazy combinations with them using what is also a very true to the lore army-list, which I love. 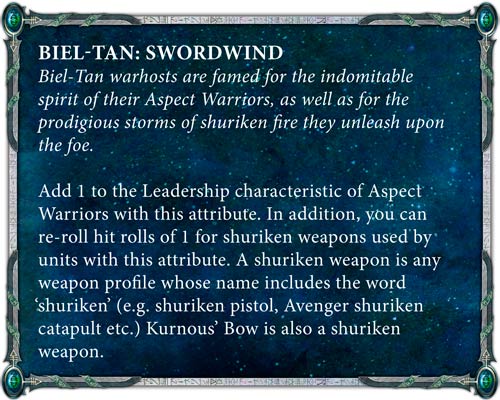 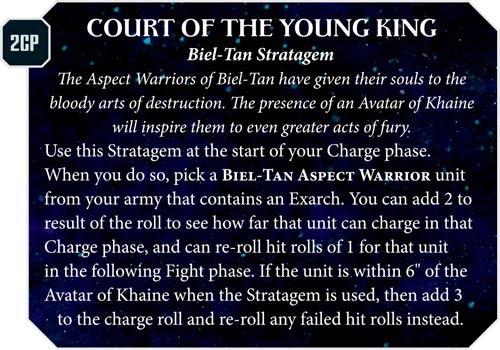 Iyanden has some awesome abilities that can create a very powerful and unique play-style. Obviously the theme is Wraith Constructs and much of what they offer revolves around buffing those units but by no means must you play a Wraith army to get a lot out of what Iyanden has to offer. They can ironically run very effective hordes of Guardians and they can also run effective mechanized lists due to their Stoic Endurance rule with not a Wraith unit in sight.

Iyanden though benefits a great deal from the Wraith units. Taking say, 10 Wraithguard with D-Scythes or Wraithblades and dropping them in using the Webway Strike stratagem, then having them move a second time thanks to the Quicken power form your Spiritseer, then blast the pants off of a target unit and/or charge them after having popped the Psytronome of Iyanden combined with the application of Guided Wraithsight and you can deliver a punishing blow to your opponent. Meanwhile, units of potentially 20 Guardians or perhaps 10 Dire Avengers to maximize the impact of Stratagems and Psychic Powers used on them, run around grabbing objectives with no fear of punishing morale checks while a Wraithknight provides fire support remaining at full efficacy until nearly dead (at which point you can easily repair him) and you have a powerful army. That is just one example as well, the possibilities are limitless. 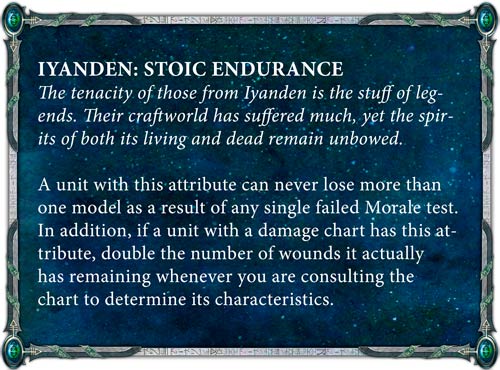 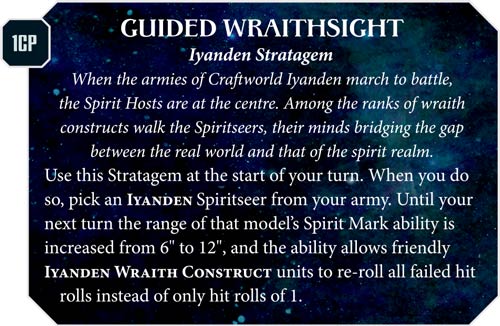 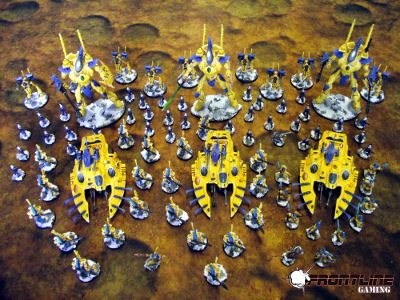 Saim-Hann provides a compliment of abilities that largely gear you towards assault and Biker armies which matches the fluff. However, while they may not scream power like some of the other do, you can build quite a good army with Saim-Hann. Scatter Laser Windriders are back in force here, and packs of them with psychic support will be devastating, particularly in this meta filled with chaff units. Guide+Doom+Dozens of Scatter Lasers=dead chaff. With their new, lower price point, Windriders will be back in a big way.

The other benefit of Saim-Hann is utilizing any unit that wants to engage in melee and can also go into reserves. Striking Scorpions (who are great for filling out those Brigade detachments) can function largely on their own here and have a much higher chance of getting in to melee after coming on to the table. However, Howling Banshees too, using Webway Strike, are great with Saim-Hann as with their +3″ charge and a re-roll, will have a very high chance of making the charge from reserves and as they ignore over-watch, can really jam your opponent up.

Saim-Hann are also great for simply taking a detachment of them. An Outrider detachment consisting of an Autarch and three units of Scat Packs will bring a lot to an Eldar army needing really no other support. 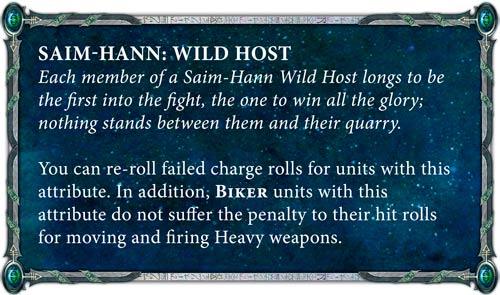 Ulthwe provides an army wide durability buff which while it doesn’t scream power, when you approach it mathematically, it is not bad. Essentially, your entire army becomes 16.6% more durable which when viewed from a wider perspective, is quite good. As it works against all wounds and at any range, it means your army can be built in any way you like and you benefit from it, which is nice. It gives you a lot of freedom to build a list in any way you like whereas a Carftworld like Saim-Hann really wants you to use Bikers.

That said, Ulthwe does have a stratagem that only works on Guardians but Guardians are quite good in my opinion, and cheap. They have a plethora of buffs available to you, too, and simply deep striking in a large unit and blasting someone with 2+ to hit Shuriken Catapults then fading away using the Fire and Fade stratagem is an easy and effective tactic that does a lot of damage. Likewise, even Storm Guardians with Fusion Guns coming in using the Webway Portal, or running around the table, hitting on a 2+ or with some character support, are quite good.

But the real strength of Ulthwe again, is in having total freedom to build whatever army you like and simply having them be more durable than they would have been. 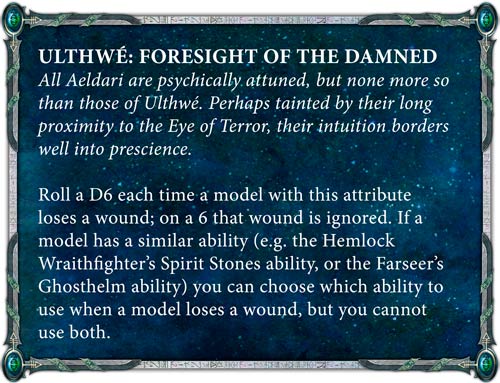 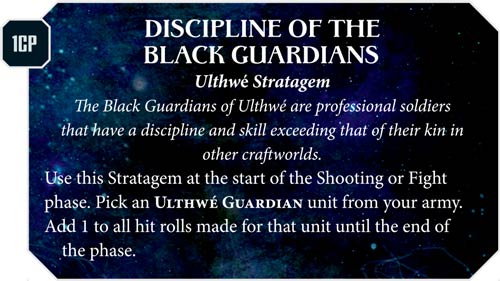 Well there you have it! Part 1 of this 8th ed Eldar review over and done with. Part 2, covering the units in the dex, will be coming shortly. In the meantime, which Craftworld set-up is your favorite?