Hi everyone, Michael (from St Andrews Wargaming) here with a review of the Space Marine Transport vehicle which has seen a nice resurgence in 8th edition, the Razorback. For more reviews and analyses, check out the Tactics Corner.

The Razorback is a variant of the Rhino that sacrifices some transport capacity for greatly increased firepower on the battlefield. The Razorback is a great option to add some tough firepower to your army. A lot of the time you will rarely be making use of its transport capacity, as its additional firepower is a great boost to your army, you will want to keep it still for increased accuracy. The basic Razorback with Twin Heavy Bolter costs 82 points, the Twin Assault Cannon variant costs 100 points, while the Twin Lascannon variant costs 115 points. 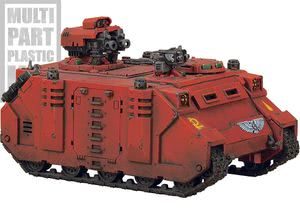 The Razorback brings a great package of transport capacity and boosted firepower to the Space Marine army and has become a very popular choice in 8th edition 40k thanks to the changes to the vehicle rules and the way twin weapons now work.

Let’s take a look at the profile of the Razorback itself. With the standard vehicle toughness of 7, ten wounds and a 3+ armour save, the Razorback has the standard durability of a vehicle in 8th edition, making it a tough prospect to deal with outside of dedicated anti-armour firepower or combat ability. Given the increased durability of vehicles, it is still going to take a couple of Missile Launcher/Lascannon shots or a ton of small arms fire to bring it down. This gives the Razorback some nice bonuses in that it should stay alive for longer and can help keep the squad inside it protected for longer. At the standard Marine BS of 3+, its improved firepower can actually be quite potent. 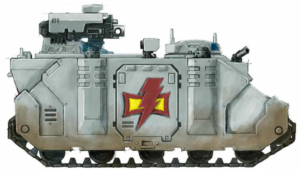 The Razorback has three main armament options. It comes with a Twin Heavy Bolter as standard. This gives it six S5 AP-1 shots and is the cheapest option available. This gives your army a nice boost to its firepower and can help support any squad that is embarked upon it, softening up enemy units before they charge or adding to the firepower of the squad. This is a nice option if you want to keep the Razorback cheap or are more concerned with getting the unit inside into the fray, but I would generally upgrade the gun to one of the two other options.

My personal preference is to take the Twin Assault Cannon. Twelve S6 AP-1 shots is a lot of firepower for only 100 points. I like the volume of shots on the Twin Assault Cannon, as the Razorback can still keep up a good rate of fire when on the move (as it will suffer -1 to hit from moving and firing a Heavy Weapon). On average you will be hitting with 6 of your shots and generally wounding with around four of them. This makes the Twin Assault Cannon Razorback great for adding firepower on the move. I often use mine to support my backfield units, either moving it around to grab objectives close to my deployment zone or camping next to my Devastators to add supporting fire and benefiting from a nearby Lieutenant. 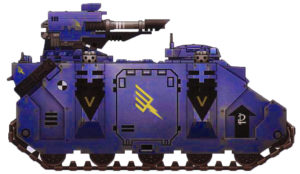 The final option (at least in the Codex) is the Twin Lascannon. This is a very popular option to add some additional anti-tank/monster firepower to your army. In fact, a Twin Lascannon Razorback can be a nice, cheap way to add this anti-armour firepower to your army and shore up some weaknesses in your list if you are building an assault-heavy Space Marine force. It is cheaper than a Twin Lascannon Predator and only has one wound less, making it quite a bargain in this role. I find that this Razorback suits a more static role on the battlefield to maximise the firepower of the Twin Lascannon. However, if you do need to move it around, you will still hit with one of your shots on average, so you still keep up a decent rate of fire on the move. As the Razorback starts to take damage and its profile degrades, you probably will want to keep it more static, as it will be hitting on 5’s or 6’s on the move. Again, this is why I like the Twin Assault Cannon Razorback, as its high rate of fire means that even hitting on 5’s or 6’s, you can sometimes sneak in some good shots with it. 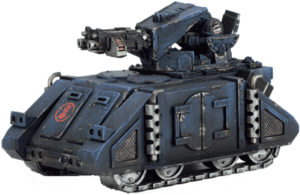 The Razorback has a reduced transport capacity of 6 compared to the Rhino. This isn’t really much of a problem though. Given the changes to morale, it is rare to see 10-man Space Marine squads on the field often, as there is more risk of losing members of the squad to a bad morale test.

The transport capacity of the Razorback has dual capabilities for your army and deployment. The first is that it can decrease the number of deployment drops in your army, being able to transport a 5-man squad and a single character, or multiple characters within it. This gives you a better chance of getting the first turn if you have fewer drops than your opponent. The second is increased durability for the squad inside. Obviously, if they are not on the table, they cannot be shot at. I will often run the Razorback with a 5-man Tactical Squad and a Librarian. The Tactical Squad can be armed with short-ranged special weapons such as a Flamer or Meltagun. The Razorback allows them to get up close and utilise their weaponry to greater effect. It also makes a great transport for small close combat squads, such as Assault Squads or Vanguard Veterans without Jump Packs. Add in a Chaplain for combat re-rolls, and this can make a nice assault element for clearing cheap troop choices off of objectives. The added firepower of the Razorback is also great for softening up the target unit before launching an assault. 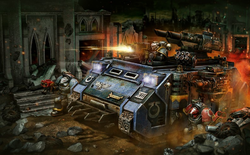 The Razorback also makes a great transport vehicle for Devastator squads. You can start the game deployed in the Razorback for added protection in case you don’t get the first turn. You can then deploy in your first turn and use the Razorback to support the firepower of the Devastator Squad. As you only suffer -1 to hit for moving and firing Heavy Weapons now (rather than snap firing), this can be a useful sacrifice of some measure of firepower to keep the squad alive for a turn, or prevent a first turn charge from tying up the valuable firepower of the Devastator Squad. This works well if they are armed with high volume firepower weapons such as the Heavy Bolter, Grav Cannon or Plasma Cannon.

Adding a Storm Bolter to the Razorback is also a great option, giving you 2-4 additional shots for only two points. I generally wouldn’t bother with the Hunter-Killer Missile, as it is too expensive for a one-shot weapon that will generally be hitting on a 4+.

The Razorback is a great choice for transport vehicle in the Space Marine army. It doesn’t have the durability of the Land Raider, but is a fraction of the cost. It doesn’t have the transport capacity of the Rhino, but it has greatly increased firepower. For its cost, it is one of the most efficient dedicated transport vehicles or a potent gun-tank in the Space Marine arsenal. Add one to your army, and I am sure you will not be disappointed with the results (hell, add two or more!).