“The basis of all true cosmic horror is violation of the order of nature, and the profoundest violations are always the least concrete and describable.” 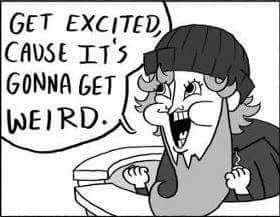 A Chaos Spawn is what happens when you flip your coin for the Dark Gods and end up tails- the inevitable fate for the overwhelming majority of its champions. Mutated to the point of incoherence and unrecognizability, they are flailing masses of agonized flesh that lash out at whatever comes near them. Depending on which of the Chaos powers they worshipped before their devolution they may take any number of forms, but they inevitably come with masses of deadly appendages and a hunger for the death of mortals as revenge for what they have become.

In the context of the game Chaos Spawn are a bit of an unusual unit; they are a mid-range combat unit with many stats that are a bit above the norm, but none so high as to make them into an easily-classifiable specialist at any particular task. They are relatively quick (Mv7″) and reasonably tough (T5 W4 5+), but concentrated fire will drop them well before they reach a defended position. They can also put out reasonable damage (WS4+ S5 d6 Attacks), but certainly won’t be killing off units on their own. Their real virtue is that they are cheap and disposable- at 33pts apiece, you’re not investing much into getting them, and indeed they are the cheapest Fast Attack choice available to a CSM army or to the Chaos metafaction as a whole.

Spawn can be taken in units of 1-5 and may select any Legion trait or Mark of Chaos. 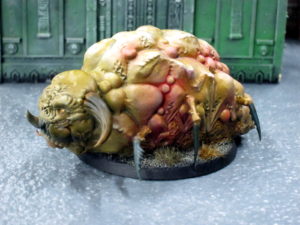 Chaos Spawn have a surprising number of abilities on their sheet for how basic they generally seem. At the most fundamental level, they come with a melee weapon that almost any unit would be proud of, their Hideous Mutations. Starting at S5 AP-2 and Dmg2, the Mutations are strong enough to wound anything smaller than a tank pretty easily and have sufficient AP to give even Terminators some pause. The really clutch part, though, is the two damage that they deal per swing- for anything with multiple wounds (Primaris Marines, the aforementioned Terminators, monsters and vehicles, etc) that can be a pretty terrifying prospect, as they are typically looking at a 5+ or worse save in order to stave off the damage. Even most characters are going to be leery of fighting a Spawn- they might kill it pretty easily, but if it gets to swing back at them, there is a very significant chance it will eat away at their wound count or even kill them outright.

To make them even more dangerous, each unit of Chaos Spawn rolls up a random “mutation” each combat phase when they attack. There are three possibilities, and all of them are excellent- you’ll never be sad to see any of them as they are all strict improvements. Razor Claws improves your weapon’s AP to -4, meaning most units will get no save at all against it (or are relying on an invuln); Grasping Pseudopods adds +2 Attacks for the turn, giving you an average of six swings at a target; Toxic Haemorrhage lets you reroll failed wounds, giving you a much better shot against large targets and more reliability against small ones. Though you have no real control over which ability you end up with on a given turn, all of them do the same basic job (improving your damage output) and so end up being more than acceptable.

Just to add insult to injury, any unit locked in combat with Chaos Spawn has -1 to Leadership, making any morale tests a little bit more dangerous. It’s not a huge deal, but it can synergize with some psychic powers (like those of Slaanesh daemons) and push Marines and other high-leadership units towards having to worry about morale, especially in combination with Legion traits or other special abilities. 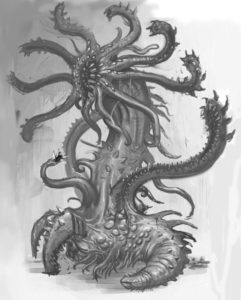 So let’s be upfront: Chaos Spawn aren’t going to be a mainstay of your army. They simply aren’t tough enough to shrug off a lot of damage; any kind of S5+ weapon will cause them significant problems, as they rely heavily on their Toughness to shrug off damage. Heavy weapons like Missiles and Lascannon will also give them a bad time, stripping off multiple wounds in short order. This dual vulnerability can feel pretty punishing at times, but the truth is it’s not as bad as all that. They may not be much good as the centerpiece of an assault, but as an opportunistic assaulter they are second to none.

All sorts of weapons will tear apart a Chaos Spawn, but the key thing to remember is that any guns aimed at them aren’t shooting your other units on the field. Chaos Spawn are cheap and easy to hide behind vehicles, buildings, etc; if the enemy is spending effort killing them off, your other units are probably taking a lot less fire, as they take a disproportionate amount of firepower to get rid of. If you’re doing it right, no one is even going to bother to shoot at your Spawn, as they will have Khorne Berzerkers, Maulerfiends, Chaos Bikers, Possessed, Daemon Princes, etc, as much more pressing concerns.

So your Spawn won’t be at the forefront of your assault, but what they should be doing is piling in on other combats to help out wherever help is needed or starting fights with weak units that don’t really want to be in a fight in the first place. A unit of Chaos Spawn will chew up a group of Tactical Marines pretty easily and probably take minimal damage in return; likewise heavy weapon units. Their favorite of all is non-Flying vehicles, however- not only do they lack the ability to attack back effectively, but the Spawn’s multi-damage weapon is extra effective against them and if they choose to fall back they will inevitably just get re-assaulted again the following turn, effectively reducing them to hitting on 6s with everything. Remember that the enemy can’t shoot overwatch at you if they can’t see you- with the relatively small model size and count in a unit of Spawn, you can often tuck yourself behind some terrain to assault the enemy unmolested. 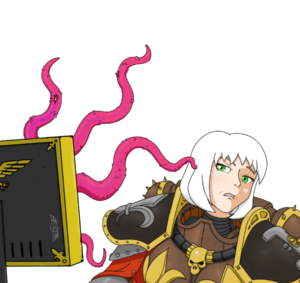 The key to being successful with Spawn is to make them a non-issue in your opponent’s mind- taking lots of other threats is part of this, but also avoiding overinvesting in them is also important. I always run mine in solo units, though a unit of two is probably still defendable. More than that, however, and you have a pretty significant chunk of points right there and a much more valuable target for the enemy to point guns at- avoid this at all costs. Spawn should always seem like an afterthought on the battlefield, pouncing in to kill something where they aren’t expected or are simply too much trouble to deal with at the time. As mentioned earlier, their ability to take small squad sizes and reasonably cheap price per model make them one of the best ways to fill out your FA slots in a detachment- if you’re aiming to take a Brigade or Outrider, Spawn can be an excellent addition.

Also, it’s easy to forget that Chaos Spawn still are part of their Legion and will benefit from all of the buffs that your characters give out. (They are not, however, Infantry, and thus can’t carry the relic, have a harder time getting cover, etc.) Although you probably won’t be working too hard to get them in range of buffs, it’s very possible for them to join in on a larger combat and end up benefiting from one or more auras; the Chaos Lord and Dark Apostle are good choices here, as they help mitigate the poor accuracy on the Spawn’s attacks. 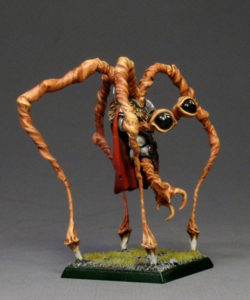 Though in the dim past they were one of the laughingstocks of the game, Chaos Spawn are pretty legit these days. You may not see them as a centerpiece of a lot of Chaos armies, but they fulfill a very useful role in terms of both army construction (i.e. filling slots) and on the battlefield (i.e. harassing the enemy.) They’re a very solid unit with some great modeling possibilities and every once in a while you will have one of them go hog-wild and do 12 or 16 damage to a Knight or the like- pretty good for a unit that costs barely more than a Lascannon!

As always, remember that Frontline Gaming offers great deals every day in their webstore if you’re looking to add to your army or start a new one.

P.S. If you have any good conversions for your Spawn, especially Slaanesh- or Emperor’s Children-themed ones, I would love to see them. Looking to do an “upgrade” on my own ones and looking for ideas.