Tired of missing your attacks? Plasma overheats got you down? Looking for the sweetest of sweet rides? Have no fear, the Chaos Lord has got you covered!

Click below to read on, or check out the Tactics Corner for more reviews and strategies. 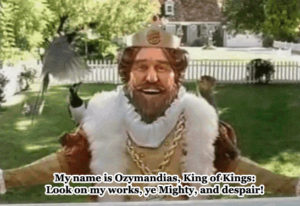 The Chaos Lord is something of the “default” HQ for a CSM army and the mirror equivalent to the Captain in a Space Marine army- or, indeed, many of the other basic leaders for a lot of different factions. Coming in with a respectable statline and some excellent basic utility, a Chaos Lord is an excellent way to start almost any Chaos army, as it can buff almost any unit that stays near it and comes with a wide variety of options to open up different roles.

Chaos Lords start out with a pretty basic set of characteristics- they have similar stats to basic Chaos Marines, but benefit from a number of increases. WS/BS2+ mean that they will almost never miss with their attacks (especially thanks to their own ability) and four Attacks means that they can put out respectable damage in melee combat. Five wounds base with a 3+ armor save and 4+ invulnerable save make them tough enough to take some punishment, though you shouldn’t rely on it, as they will die pretty quickly if they start taking attacks. 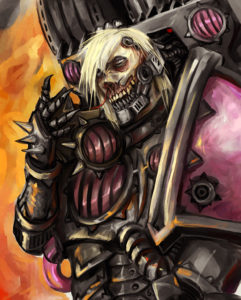 Chaos Lords have a wide variety of options to select from, being able to take off most of the lists available to CSM. They come with Frag and Krak Grenades as well as a Bolt Pistol and Chainsword, and can swap out the latter two for various ranged and melee options- Combi-weapons, pistols, power weapons, etc. The Lord’s innate accuracy can make them an excellent carrier for the various special melee and ranged options, as planting a Melta shot or a couple Power Fist swings on a target can get your point across pretty handily.

A Chaos Lord can also select from a variety of types of upgrades to their armor and mobility; some of them are only present in the Index, but are still legal by most tournament rulings. Terminator Armor will give your Lord an extra wound and the ability to teleport onto the field as well as a 2+ save; it’s excellent for showing up alongside some other reserve units or delaying your choice of where to place yourself. A Jump Pack is a bit cheaper and still lets you arrive anywhere, but doesn’t come with any statline increases other than improving your Movement to 12″. However, the addition of the Fly keyword lets you assault targets that might otherwise be out of reach, so it’s definitely not something to dismiss. A Chaos Bike also improves your speed and gives you an extra Toughness and Wound, but doesn’t open up any other deployment options- as a result, it’s generally not a prime option. Finally, depending on your choice for Mark of Chaos, you will have one of four different mounts available to you; most all of them add a bonus wound as well as a speed improvement and some minor bonus attacks from the mount. The Juggernaut of Khorne is the hardest-hitting (three S5 AP-1 attacks, S7 on the charge) but is also relatively slow at only 8″. The Disc of Tzeentch is inexplicably bad, making only one S4 attack and giving no bonus wounds or other abilities aside from Fly. The Palanquin of Nurgle is also lackluster, actually lowering the character’s speed and making d6 S2 attacks each turn. The Steed of Slaanesh makes two S4 attacks, but ups your speed to 12″ and lets the rider advance and charge in the same turn.

However, the main reason you’ll want to be bringing a Chaos Lord is for its aura- all units of the same Legion within 6″ can reroll hit rolls of ‘1’, making both their shooting and melee significantly more accurate- especially as they are usually WS/BS3+ to start with anyways. As it also affects the Lord themselves, you’ll need to roll a pair of ones in a row in order to miss with any of their attacks- possible, but not terribly likely.

Like all standard CSM units, a Chaos Lord also has the Death to the False Emperor rule and will benefit from Despoilers of the Galaxy and/or a Legion trait when taken in the appropriate detachment. 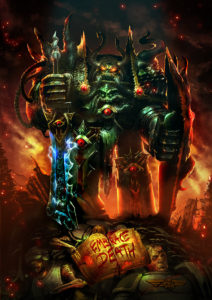 So, unlike in past editions, as Chaos Lord doesn’t just exist as a beater; instead, they bring one of the most useful buffs you can have for a relatively cheap price. They are, in fact, somewhat lackluster in combat- especially since they are unable to access Storm Shields or some of the other nifty toys that the Imperium gets. On the other hand, there are a wide variety of excellent relics available for them to take, including the Blade of the Hydra and Black Mace, both of which can significantly up your melee game. So while they may not be ready to take out whole platoons on their own, they can generally stand up to most other basic-tier combat characters, which should be good enough.

More importantly, though, that reroll 1s aura is clutch. For those of you who haven’t been paying attention, rerolls are where it is at and have been for a long time. Rerolls make your weapons more reliable and let you get around inconvenient things like overcharging Plasma and such; they’re just great in basically every way. So having one or more reroll auras is absolutely huge for any kind of tournament army these days, especially if you can stack it with other bonuses. In this respect Chaos does pretty well, since they have access to Prescience (which will virtually guarantee every shot hits and lets you completely ignore Overcharge penalties) as well as the Exalted Champion (whose own aura gives you rerolls on wounds, complementing the Lord nicely.) Since you’re looking at two or more HQs in almost every army- and more commonly 3+ such characters- you can afford to pick and choose a little bit to determine what you need. 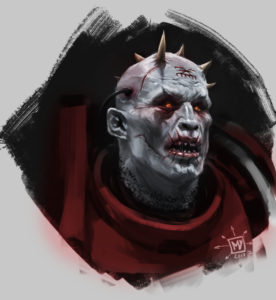 The Chaos Lord isn’t the only CSM character who gives out a reroll aura, though- the Daemon Prince does as well, and so do the two respective Primarchs. However, the Lord is much cheaper than the other options, so if all you really care about is the aura then he is for sure your dude. (A Prince, being tougher and faster, serves as more of a hybrid buffer-spellcaster-beater character that does a bit of everything for a solid price.) I usually end up running two Chaos Lords in my lists, as it’s not really realistic to try and keep your entire army within a single 6″ bubble without completely ceding control of the board to the enemy; two such bubbles allow you to keep most things within range while not really limiting you nearly so much.

The basic Chaos Lord is pretty useful in terms of being able to hang out on your side of the field, but you shouldn’t underestimate the Terminator/Jump Pack versions, either- being able to arrive on the far side of the board along with something else (often one or more units of Terminators/Oblits) can be a pretty big deal as well. If you’re staying on foot, though, you might do well to consider picking up a mount for your Lord- especially if you’re running as Khorne or Slaanesh, as their mounts are both excellent. The abilities and characteristic boosts it gives you are reason enough, but the larger base size (typically 60mm) also expands the area that your aura can reach to, though it does make moving around a bit trickier. Losing out on the Infantry keyword can be big, though, as it makes cover harder to find, stops you from passing through ruin walls, and prevents you from picking up the Relic. All in all, there are good reasons to consider nearly every loadout, depending on what you feel you need to be doing. 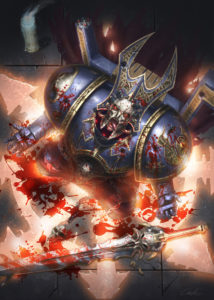 There really is no wrong way to run a Chaos Lord- every legion can benefit from their presence, and very nearly every unit will as well (barring the small handful that don’t make many hit rolls, such as the Heldrake.) So even though it (gasp) risks being fluffy, you will want to strongly consider including at least one in nearly every CSM army that you bring in order to at least get your most important units to do what needs to get done.