Hello fans of Frontline Gaming and TFGRadio, SaltyJohn  here to bring you a review of the new 8th edition Chaos Space Marines rules for the Dark Apostle! For more reviews, bat reps, tactics discussions, and analysis check out the Tactics Corner!

The ranks of the Chaos Space Marines are filled with twisted, bloated, and maniacal versions of their loyalist brethren ranks. One of the most obvious examples of this twisting of the Emperor’s work is the Dark Apostle. A soldier of the Adeptus Astartes who’s piety and exceptional steadfastness, even among gene-enhanced super soldiers, brought them to lead through example and speech would see themselves promoted to rank of Chaplain. In the ranks of the Heretic Astartes though the Chaplain’s faith in the Emperor is replaced with a Zealous devotion to the Dark gods of Chaos, and instead of leading Space Marines in the name of the Emperor the Dark Apostle leads ranks of heretics, Astartes, and daemonic hordes into battle in the name of Chaos. 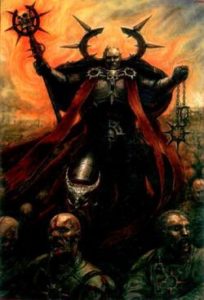 In terms of game play the Dark Apostle in 8th edition plays in a manner befitting their role in the fluff. This has become a more common theme in this edition of Warhammer 40k and the game is certainly better for it. The Dark Apostle is a Character HQ choice whose special rules work to buff the friendly units around him. With decent stats for Close Combat and boosts to friendly units in combat the Dark Apostle plays an important role in armies hoping to be in combat early in the game. While they are often associated with the Word Bearers, thanks Erebus, they mesh extraordinarily well with Alpha Legion and even World Eaters. 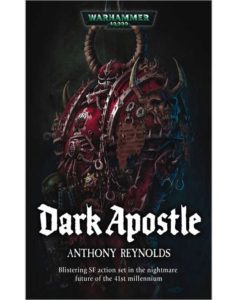 From the get go the Dark Apostle is obviously designed to be used near units in Assault. With the Dark Zealotry rule buffing units abilities to hit in the Fight phase and giving them a boost to leadership from morale he can be indispensable to the correct units in combat. In 8th edition currently shooting is king but with the rise of Chaos early in the edition there is definitely room for some assault based armies to really spoil things competitively for several armies.

The Dark Apostle would work quite well with a few specific units. Khorne Berzerkers are exceptional in this edition so far. Cultists, particularly Alpha Legion or World Eaters, have some serious potential in early turn Close Combat situations. CSM Possessed are another hard hitting unit, that when buffed properly will excel in combat; especially in a layered assault wave build in an Alpha Legion list. The Dark Apostle works even better when coupled with the Exalted Champion, I will cover the Exalted Champion in depth in another article but basically with the two Characters around units in Combat will be re-rolling misses to hit and re-rolling failed to wound rolls. It’s a devastating combo. 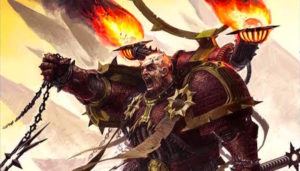 So how best to utilize this Character? Obviously he doesn’t have much of a role in a CSM gun line. If you’re running either a World Eaters Rhino Rush list or an Alpha Legion infiltration list he can be key. If you’re running World Eaters then putting him into a Rhino with 8 Berzerkers, with another Rhino containing 8 more zerkers and the Exalted Champ nearby, is a great strategy. 4 Rhinos rushing forward filled with Berzerkers, Apostle, Champion, and followed up by a large blob of World Eater Cultists can give you quite an assault punch that can weather 2 or so rounds while the rest of the list does work and scores points.

In an Alpha Legion list you’ll need to be careful to design the list with enough CPs to let you infiltrate all the necessary units. A big screen of Cultists, 1-2 squads of Berzerkers, the Dark Apostle, Exalted Champion, and perhaps a unit of 15 Possessed would be a great start to an Alpha Legion list with serious turn one a two punch. It will require a small detachment of Daemons so you can get the Changeling to boost the Possessed to -2 to hit so your second assault wave can stay intact; however you need the additional CP to infiltrate so many units so a Daemons Battalion on the cheap with a bunch of Brimstone Horrors isn’t a terrible addition. With the Dark Apostle and Exalted Champion positioned correctly you should be able to do a great deal of damage to the enemy on turns 1 and 2 without having to be too afraid of losing either character. 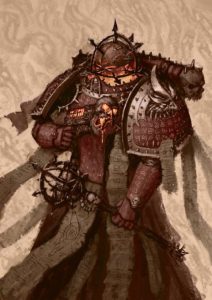 The Dark Apostle is an excellent addition to any list that is looking to get into Close Combat and do work, so long as the list isn’t fast. The inability to put the Dark Apostle on a bike or give him a Jump Pack is a definite down side to the unit as a whole. All things considered the Dark Apostle, like many units so far in 8th edition codices, has a definite role to play in certain builds.