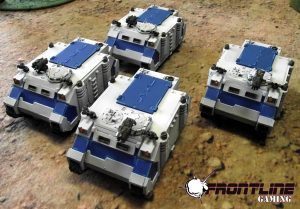 Hi everyone, Michael here with an 8th edition review of the classic Space Marine transport vehicle, the Rhino. The changes to the vehicle rules for 8th edition have given the old classic a big boost and a great way to keep your units safe, just as a good transport should. For more reviews and analyses, check out the Tactics Corner.

The classic way to ferry your Space Marines into battle is back in 8th edition and is better than ever (ok, it was better when it was free, but you can’t have everything!). The Rhino got a big resurgence in popularity with the release of the Gladius Battle Company, but 8th edition has seen some great improvements to the vehicle rules that have made the Rhino a fantastic transport vehicle and well worth taking in a Space Marine army. The basic Rhino costs 72 points (including wargear) and takes up a Dedicated Transport slot. 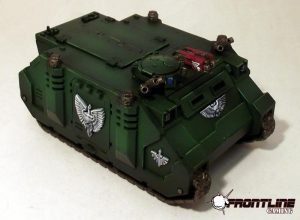 As mentioned above, the changes to the vehicle rules has meant that the Rhino got a big boost in 8th edition. It now has toughness 7, ten wounds and a 3+ save, making it far more durable than it was in previous editions. It can now no longer be taken out in one shot from a Lascannon or Meltagun (or even an Autocannon or lucky Assault Cannon shot). This actually makes it a very durable vehicle for transporting your units around the battlefield in relative safety until they are ready to deploy. Add in the ability of Smoke Launchers and you can further protect the Rhino by making it harder for most enemy units to hit it in the shooting phase. I run at least one Rhino in all my Space Marine armies and it can actually take a fair amount of dedicated firepower to take one down (the joy when your tank makes a 5+ save against a Missile Launcher is actually quite fun!). 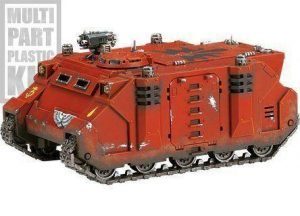 Self-repair is a nice bonus, but not one you can really count on. On average, you will be lucky if you roll a 6 once per game, assuming the Rhino survives that long.

The Storm Bolter gives you some nice bonus shots for the Rhino. For only 2 pts, it is well worth taking the additional Storm Bolter for a little extra firepower. Four Bolter shots at range and 8 at rapid fire range is a nice bit of additional firepower to support a unit inside, for not that many extra points. A lot of the time when the transported unit has deployed, the Rhino can be hanging around just waiting for them if they want to redeploy, so having some bonus shots on the vehicle can be a nice boost. I probably wouldn’t go for the Hunter-Killer Missile. Only one shot, hitting on a 4+ if you move is not much of a guarantee, though it is only 6 points, so it you have them spare and simply can’t get anything else in your list, it is nice for an additional shot. 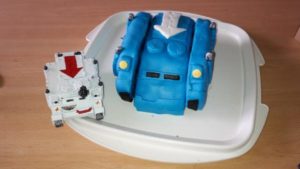 The tastiest of the transport vehicles.

Of course, another big bonus of the Rhino is the ability to soak up overwatch fire. Given that vehicles can now charge it the charge phase, you can always charge in the Rhino before the squad it was transporting to potentially take all the overwatch fire from an enemy unit. Given its toughness, it can be tough for most standard infantry to harm it. This is especially useful for shots that hit automatically, such as Flamer weapons. The Rhino can also be useful to get in the way to protect your own units from attacks such as Smite, which automatically hit the closest enemy model. This can be more useful when combined with the Armour of Contempt Stratagem, giving you a 5+ save against Mortal Wounds and helping you to potentially soak up a number of Smite attacks. 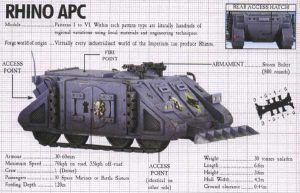 Thanks to the Defenders of Humanity rule, the Rhino has even more use, allowing you to get your “Objective Secured” Tactical Squads and Scout Squads into prime position to steal or contest the objectives. The Rhino is also great for minimising your Deployment drops, allowing you to put two 5-man squads in the one vehicle or a 5-man squad and multiple characters. Obviously, the fewer drops you have, the better your chances of getting the all important first turn. 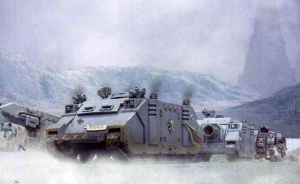 The Rhino has the same role that it has always had. It provides some protection to transport your more fragile units into the heart of the enemy army. Thanks to some of the rules changes from 8th edition, it is now even better in this role, providing some great protection from its increased durability, as well as being able to charge in and take some overwatch fire for another unit planning an assault. They are well worth including in your Space Marine army for a cheap points cost.