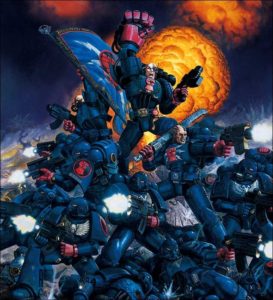 Hi everyone, Michael here with a review of the Crimson Fists’ Chapter Master, Pedro Kantor. He provides some great buffs for a Crimson Fists army and is a useful addition to such a force. For more reviews, analyses and battle reports, check out the Tactics Corner.

Pedro Kantor is the Chapter Master of the Crimson Fists and can be fielded in Crimson Fists Space Marine armies as a HQ choice. As a Chapter Master, he has an impressive statline, as well as some good wargear and access to some amazing buffs for nearby combat units (or really any units in the army). Pedro Kantor costs 170 points, which is a bargain for what he provides to the army if you use him right. If you play Crimson Fists, I would highly recommend adding him to your army. 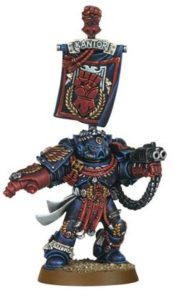 Let’s take a look at Pedro Kantor on his own, before we see what he adds to an army. As a Chapter Master, Kantor has an impressive statline. He has a WS and BS of 2+ (though hits on a 3+ in combat), strength and toughness of 4, a great 6 wounds, 4 attacks base, Ld 9 and a 2+ save, with a 4+ invulnerable save.

He comes armed with Dorn’s Arrow, giving him some useful firepower offence. He gets four shots that hit on a 2+ re-rollable at a strength of 4 with -1 AP. Thanks to the Crimson Fists Chapter Tactic, he ignores the effects of cover, so that -1 AP almost always gets used to full effect. This means his firepower should kill one Marine each turn on average. Not brilliant, but a nice bonus, as shooting is not where his talents lie. Also note, Dorn’s Arrow is an assault weapon, allowing him to advance and fire if you want. 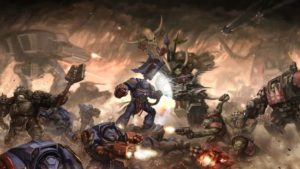 In combat, Pedro Kantor is more impressive. He gets 5 attacks with his Power Fist, hitting on a 3+ and re-rolling 1’s to hit thanks to his special rules. He will be striking with S8, with -3 AP and D3 damage with each successful wound. He should have no problem tearing through standard infantry and should even bother other characters and vehicles if they don’t have too good of an invulnerable save. It’s just a pity that he does not have access to the Fist of Vengeance Relic, as hitting on a 2+ re-rollable and doing an automatic 3 damage with each wound would be an amazing combo with him. He is only toughness 4, but a 2+ armour save, 4+ invulnerable save and 6 wounds should put him in good stead to survive against a range of threats in combat. In addition, if Pedro Kantor is your warlord, you gain an extra D3 attacks it there are 10 or more enemy models within 6″ of him. With a potential 8 attacks in combat, Kantor can quickly become a force to be reckoned with.

Where Kantor really becomes awesome is the buffs he provides to the rest of the army. As a Chapter Master, he provides full re-rolls To Hit to all Crimson Fists units within 6″. This is a great bonus, really boosting the damage output of any nearby units. An added bonus, you don’t need to spend 3 of your precious command points to gain access to this great ability unlike a generic Chapter Master (though remember you can only take a single Crimson Fists Chapter Master in the one army). He also gives every Crimson Fists model within 6″ an extra attack. This applies to all models, even vehicles. This can be great for really boosting the effectiveness of close combat units or for giving you extra attacks to repel the enemy force from your gunline. 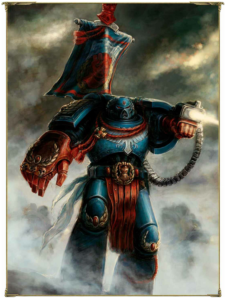 There are many great ways to run Pedro Kantor in your army.

Kantor will boost a Sternguard Squad armed with Special Issue Bolters. Giving them full re-rolls to hit will be a great boost to their firepower output, especially when combined with the Masterful Marksmanship Stratagem. In addition, each Sternguard will get 3 attacks when within 6″ of Kantor, providing a great boost to their combat effectiveness, as they will also get re-rolls to hit in the fight phase. 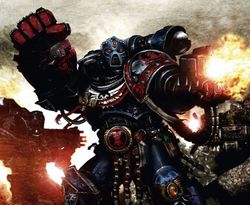 Similarly, Vanguard Veterans will compliment Kantor’s combat prowess with their attacks. A pair of Lightning Claws on a Vanguard Veteran will give a model capable of doing a lot of damage. This would give them 4 attacks with re-rolls to hit and to wound. A unit of 9 Veterans with Lightning Claws will put out 36 attacks with full re-rolls, enough to worry most units in the game. If you wanted to, you could add some Thunder Hammers and Storm Shields to the unit to provide some additional protection and make the Thunder Hammer attacks even more reliable thanks to the re-rolls that Kantor provides.

Equally, Pedro Kantor could boost a gunline army, his full re-rolls to hit greatly benefiting a range of Space Marine units such as Devastator Squads, Predators, Centurion Devastators, etc. He also provides a potent counter-attack unit to go and punish enemy units threatening your gunline, as well as giving your units additonal attacks.

Kantor also works well when accompanied by a Lieutenant. With Pedro Kantor giving those around him extra attacks and re-rolls to hit, the Lieutenant helps to further maximise the damage output by providing re-rolls of 1’s to wound. I’ve faced a unit of Vanguard Veterans loaded for combat accompanied by Pedro Kantor and a Lieutenant before. There is little in the game that can stand up to that combination in combat. You can even give the Lieutenant the Fist of Vengeance Relic to further boost the combat potential. 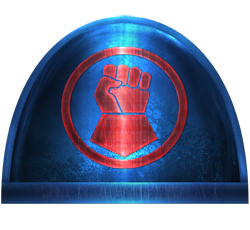 Stratagems that let Kantor attack again in combat are going to be very powerful to use. For example, Honour the Chapter allows him to attack once more at the end of the Fight Phase. Although expensive at 3 command points, it can be game winning in the right situations. You will be getting at least 10 Power Fist attacks in the one phase, with the possibility of getting 16 attacks in a single phase (or more with some psychic powers). Even if you are not using Honour the Chapter on Kantor, but on a nearby unit, his re-roll to hit bubble maximises the effects of this Stratagem.

You should also bear in mind to use “Only in Death Does Duty End” if Kantor happens to be slain and you are in combat with him. This can potentially allow him to take down or seriously harm the threat that just killed him off. 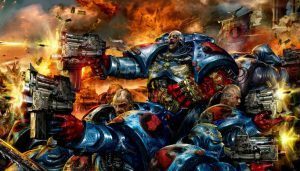 As you can see, Pedro Kantor provides a lot of benefits to a Crimson Fists army. As well as being a solid combat character, he greatly boosts any nearby units, both in their shooting and close combat attacks. For only 170 points, he is a real bargain if used correctly, such as in boosting a combat unit.