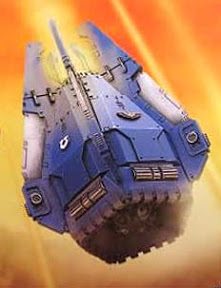 Hi everyone, Michael here with a review of the go to unit for transport in 7th edition; the Drop Pod. How does it compare now with the changes in 8th edition 40k? For more reviews, analyses and battle reports, check out the Tactics Corner.

The Drop Pod was the king of transports in 7th edition 40k (at least until the release of the Gladius Strike Force). It was a tough transport vehicle that could ferry your troops into the heart of battle in relative safety, and with Objective Secured it could sit on objectives for most of the game.

In 8th edition, the Drop Pod still has some uses, but a large points increase and a change to its rules means that you will probably not see as many of them on the tabletop as you once did, if you in fact see any in an opposing army. The basic Drop Pod costs 95 points and takes up a Dedicated Transport slot in the army. 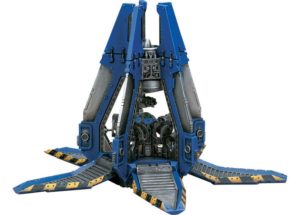 The Drop Pod has gone from one of the toughest transport vehicles in the Space Marine arsenal to one of the weakest. It has toughness 6, 8 wounds and a 3+ save. While not terrible, it is now lower in durability than the Rhino or Razorback. It has BS 3+ and has no attacks in combat, so not much change for it there. 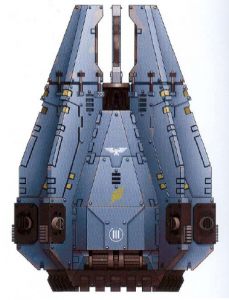 The Storm Bolter is a nice weapon to arm it with, getting four shots at Rapid Fire range. It’s not going to be tearing things apart, but might add a few extra wounds to an infantry squad. The Deathwind Launcher is a nice upgrade for only 5 points, but I generally wouldn’t bother with it unless you have a few points to spare and nowhere else to spend them. I would rather go for the Storm Bolter’s reliable four shorts at short range and two shots at longer range, than hoping to roll a 5 or a 6 for the Deathwind’s number of shots.

Firepower, however, is not why you are using the Drop Pod. The Drop Pod has one purpose; to transport units in reserve to where you want them on the battlefield if they have no other “Deep Strike” deployment options. 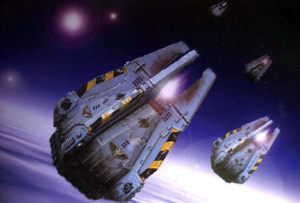 The changes to the Drop Pod assault rules have made the Drop Pod more reliable in where it lands, but also a bit less useful in where it lands. With the changes to Drop Pod assault, you can now place the Drop Pod exactly where you want on the battlefield, assuming it is more than 9″ from an enemy model. The squad inside can also disemark, generally getting an extra 9″ move on top of the Drop Pod, but again, you cannot deploy within 9″ of an enemy model. The lack of scatter means you can be much more accurate in where the Pod and squad goes, without the risk of going off the table if you wish to deploy near your opponent’s board edge.

Previously, the Drop Pod was useful for getting a unit close to an enemy unit to use Meltaguns at short range, firing multiple Flamers or Heavy Flamers (or Frag Cannons in the case of my Deathwatch). They were also great if they were Objective Secured for landing on or near objectives and blocking your opponent from scoring them before the Drop Pod was dealt with. The changes to the rules means that Flamers and Heavy Flamers cannot be fired on the turn that they arrive, and Meltaguns now start out of “Melta” range. This makes the Drop Pod less effective for transporting squads armed with these kind of weapons, though four Meltaguns shooting at an enemy unit should still be pretty effective even if they are out of Melta range. 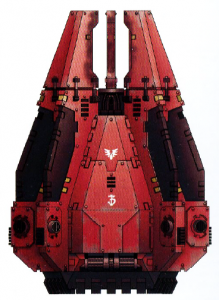 Despite these drawbacks, the Drop Pod still does have its uses. I find mine useful for deploying my Sternguard Veterans into battle. Putting them in a Drop Pod means that they are safe from the enemy firepower until they have deployed and can generally get a round of firing at full strength before taking any casualties. While the Rhino or Razorback is tougher, it can generally still be targeted by enemy fire and you risk losing some of the squad if it is destroyed or finding the squad out of position when its transport is gone. The Drop Pod allows the unit to deploy in relative safety and get a full turn of firing to try and make an impact on the game.

One drawback of the Drop Pod is that I have found that they are great for keeping enemy units safe. As the Drop Pod cannot move (hence it cannot Fall Back) and has no attacks, it is quite safe to be charged by an enemy unit. Assuming the unit cannot destroy it in combat, you will generally be unable to shoot at the unit engaged with the Drop Pod, so it helps protect them from harm. The enemy unit can then fall back in their own turn and move into another position (perhaps out of line of sight) or if they have the Fly keyword, they can still shoot. I’ve had quite a few games where enemy Skimmers have charged the Pod in one turn to move off and shoot in another turn. You also need to be aware of enemy units consolidating into the Drop Pod if they have just destroyed the unit embarked upon it. In one game, a Swarmlord finished off my Sternguard in combat, then was able to consolidate into the Drop Pod. This kept it save in my shooting phase, then in my fight phase, the Swarmlord easily destroyed the Drop Pod and was then free in his own turn to go and assault another unit. There is not much you can do against this other than be careful with your deployment, so it is something to bear in mind when you are using the Pod. 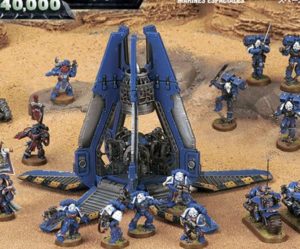 Another big downside of the Drop Pod is that it can no longer be used to transport Dreadnoughts (though I believe the Forge World rules have a Dreadnought Drop Pod variant for this purpose). If it could, this would be awesome, allowing you to get your Dreadnoughts close to the enemy army and potentially into combat on the turn that they arrive.

The Drop Pod got a modest points reduction in the Codex, but to me is still quite expensive for what it can do. If you are playing Raven Guard and don’t want to pay for one, the Strike From the Shadows Stratagem makes a nice alternative. I can still see a use for the Drop Pod in a number of Space Marine armies, and frequently run one in my own White Scars army. However, I can’t see much use for more than one in any army and you will certainly not be seeing them in the abundance that you did in previous editions of the game.