Hi everyone, Michael here with a review of the Space Marine skimmer only Scouts get to enjoy, the Land Speeder Storm. For more reviews, analyses and battle reports, check out the Tactics Corner.

The Land Speeder Storm was one of my favourite vehicles in 7th edition. It’s fast speed, decent firepower and ability to Blind enemy units made it an auto-include in most of my White Scars lists. The changes to the vehicle in 8th edition means that I don’t think it is as good as it once was, but it can still be somewhat useful in moving your Scout units around the board quickly. The basic Land Speeder Storm costs 85 points and comes from the Dedicated Transport slot. 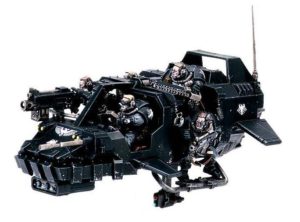 First, let’s take a look at the basic stats of the Land Speeder Storm. It has a move of 18″, making it one of the fatest, non-flyer units in the entire Space Marine army. Although it lacks the automatic 6″ advance of Biker units, its high move value makes it great for zipping around the board to grab objectives or to get to enemy units for line of sight. Having the Fly keyword also means that it can ignore terrain when it moves, making it even faster than Bike squads when playing on table with a lot of ruins or other terrain that blocks the move of Biker units, as the Land Speeder Storm can simply fly over them. This makes it very fast and manoeuvrable on the tabletop, and really increases the threat range of a Scout unit embarked on it (more on this later). 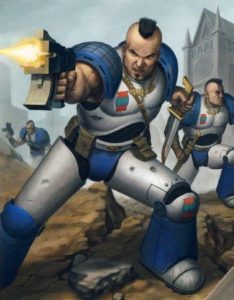 It actually has some poor durability for a vehicle, but will still take a reasonable level of firepower to eliminate. It has toughness 5, 7 wounds and a 4+ save. While not incredible, it is still tougher than most standard infantry and will take some shooting to take out. Having played against Venoms and Raiders, they can actually take a fair amount of firepower (the invulnerable save helps a lot more), so the Land Speeder Storm will definitely soak up a fair bit of small arms fire, but will crumble quite quickly against dedicated anti-tank firepower such as Lascannons, Missile Launchers and Meltaguns. However, every one of the these weapons that is shooting at your cheap Land Speeder Storm is one that is not shooting at some more expensive or more prime targets, so it probably won’t be targeted too often unless there are no other valid targets to take on.

The Land Speeder Storm has a decent level of firepower for its points cost. A Heavy Bolter and Cerberus Launcher can put out some S4 and S5 shots to support the firepower in your army. You are unlikely to wipe out any units in a single volley, but it can be useful for taking a few more casualties from lightly-armoured infantry or maybe causing a wound or two on Marine units or their equivalents. You will most likely be hitting on a 4+, as you will probably want the Storm to be moving and harassing the enemy army. Unfortunately, the codex version of the Land Speeder Storm can no longer be armed with a Multi-melta. This would be a great option, as given its high movement value, you were almost guaranteed to get into range to use the “Melta” special rule and potentially cause a lot of damage to enemy units. 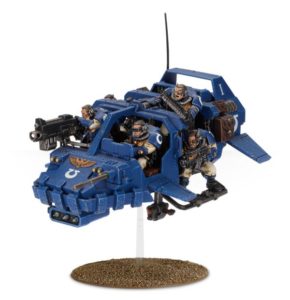 The Land Speeder Storm is also a bit better in combat than the standard vehicle. It only has 2 attacks at S4, but these hit on a 4+, making them a bit more reliable than normal vehicles (which generally hit on a 6+). This means it can be useful to charge the Land Speeder Storm into weakened enemy units (such as Guardsmen, Orks, Guardians, etc) and have a good chance of causing a few more casualties or finishing the unit off in combat. As the Storm has the Fly keyword, it can still Fall Back and fire in your following turn, meaning you can still use it effectively in the following turn. Most standard infantry will still be wounding it on a 5+, so it is not any weaker in combat than a normal vehicle in most cases. 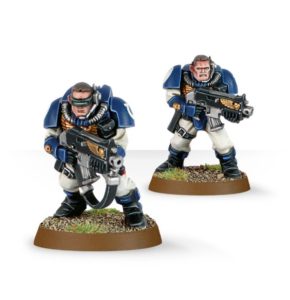 The Land Speeder Storm also has the ability to transport 5 Scout Infantry models. As the vehicle is open-topped, you can fire in the shooting phase with the Scout unit embarked (no overwatch fire though unfortunately!). For this reason, if you are going to put a unit in the Land Speeder Storm, they should be armed with Bolters. This gives them the best range and firepower output in the Storm- the pistol is too short ranged and the Sniper Rifle gives them -1 to hit when moving. You can even arm the Scout Sergeant with a combi-weapon for even greater firepower. Given the speed of the Storm, this is a great way to get a Meltagun shot into close range to get roll the extra die for damage with the Sergeant’s Combi-Melta. Alternatively, you could go with a Combi-Plasma to get extra shots by easily getting into Rapid Fire range. Being in the Storm also gives the Scout unit some added protection against enemy firepower, as they need to get through the Storm before shooting at the Scouts. In addition, this is a great way to get your Scout units onto enemy objectives and steal them thanks to the Defenders of Humanity special rule (at least until other armies start to gain access to similar rules).

Having a unit of Scouts in a Land Speeder Storm also makes giving them an Astartes Shotgun a valuable option. Again, the high move value of the Land Speeder Storm should also allow them to get within 6″ range and get ten S5 shots at an enemy unit, which can be a pretty potent source of firepower.

The downside is that the Scout unit embarked in the Storm cannot fire if the Land Speeder Storm Falls Back from combat, as they do not have the Fly keyword, so you need to be careful about getting charged, as it will seriously decrease your firepower. 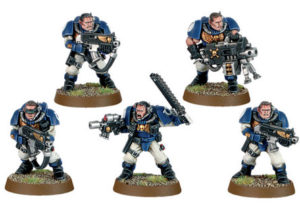 A useful way to use the Land Speeder Storm is to load it with a unit of Scouts armed with Bolters and a Sergeant with a Combi-weapon. You can use it to harass lightly-armoured enemy units, where the Cerberus Launcher, Heavy Bolter and Bolter shots should cause a fair bit of damage.

Alternatively, you can use it for vehicle hunting, by putting a Combi-Melta on the Sergeant. Fly up close to an enemy vehicle and try to cause some damage with the Meltagun (as well as the massed low-strength firepower) and then charge it in the charge phase to tie it up in combat and stop it from shooting the following turn.

The Land Speeder Storm is an OK vehicle to add to the Space Marine army. Being a transport vehicle, it doesn’t take up a Fast Attack slot (unlike a Land Speeder), so can be a useful addition if you want a fast skimmer and don’t have those spots to spare.

If you want a fast and shooty unit, you are cheaper and better off with a unit of Scout Bikers. However, the Storm is great for quickly transporting a unit of Scouts across the battlefield, using their “Objective Secured” ability to steal objectives from enemy backfield units, or for getting Melta or Plasma combi-weapons across the board quickly, ignoring intervening terrain in the way.