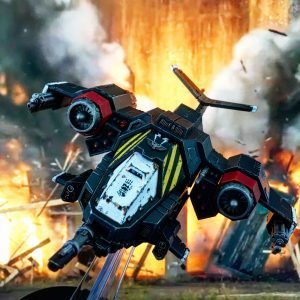 Hi everyone, Michael here with a review of the most recent of the Space Marine flyers, the Stormhawk Interceptor. For more reviews, analyses and battle reports, check out the Tactics Corner.

The Stormhawk Interceptor is a unit designed to take down unit with the Fly keyword, something that it will do very well thanks to its weaponry and special rules. It also features some increased durability over the Stormtalon Gunship, but will not be as good as its counterpart against ground-based targets. I think that if you know you are going to be facing a lot of units with the Fly keyword (Eldar or Dark Eldar vehicles, enemy flyers), it could be a very useful addition to your force, able to put out a lot of highly accurate firepower against these units. Against a most non-Fly army, its firepower is somewhat hampered a bit and it may be less effective than other flyers or vehicles available to the Space Marine army. The Stormhawk Interceptor costs 164 pts with its standard load out, but can go up to 217 points with its most expensive options. 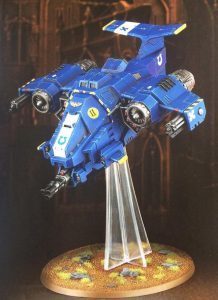 To me, the Stormhawk Interceptor brings two advantages over the Stormtalon Gunship; increased durability and utility against Fly units.

The Stormhawk Interceptor is toughness 7 versus T6 for the Stormtalon (10 wounds for each). This makes it slightly more durable than the Stormtalon against T6 weaponry. In addition, the Infernum Halo-launcher means you re-roll saving throws of 1, allowing you to re-roll roughly half your failed saves against weapons with no AP value. Added to the -1 to hit for being a flyer, you have a fairly durable fire against small arms fire and increased odds of making a saving throw against weapons with an AP value. The Stormhawk Interceptor also cannot go into Hover mode, meaning that it cannot be assaulted by units without the Fly keyword. 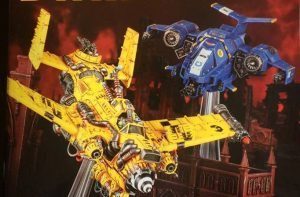 This, however, means that it must always be on the move. Given the increased movement range of the Stormhawk Interceptor, there are very few places on the board it will not be able to get to in one turn. In addition to the relatively long range of its weapons, there are few targets it will not be able to reach. You always need to be careful when moving the Stormhawk Interceptor. Bearing in mind its next turn move of a minimum of 20″ with only a 90 degree pivot, you need to ensure that it does not end up in a position where it will be forced off the board and destroyed in the following turn.

Always having to move also reduces its accuracy against a number of units. At the first wound tier, it will be hitting on a 4+ against most ground targets. It has an additional weapon to make up for this reduced accuracy against ground targets. This model is designed to go after units with the Fly keyword, as the Interceptor rule gives it +1 to hit against such targets. In addition, a couple of its weapon options give a further +1 to hit against units with the Fly keyword. This means that many of its shots will be hitting Fly units on a 2+, even on the move (though still most likely a 3+ to hit against other flyers). This makes it great for taking on vehicles or units that are non-flyer Fly units, as it will be hitting on a 2+ with the Icarus Stormcannon and Skyhammer Missile Launcher (on a 3+ with all other weapons). 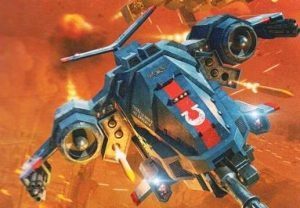 I think this makes the Stormhawk Interceptor ideal for going after Skimmer vehicles, such as the Venom, Raider, Starweaver, Voidweaver, Wave Serpent, Land Speeder or Land Speeder Storm. Against such vehicle, the flyer will be hitting on a 2+ (with the Icarus and Skyhammer) and wounding most on a 3+ as well. Each weapon also does multiple damage, increasing the odds of destroying it if they fail their invulnerable saves.

The downside of the Icarus Stormcannon and Skyhammer Missile Launcher is that if you are not aiming at Fly units, you will be hitting on a 5+, even at full strength. This is a pretty rapid decrease in its damage potential, as you are going from a 2+ to a 5+. For this reason, it may be worth replacing the Icarus with the Las-talon. You are only hitting Fly units on a 3+ now, but at least you are hitting non-Fly units on a 4+. Plus, you get the higher strength and chance at doing more damage that the Las-talon brings. 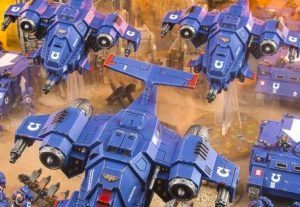 I would say that if you are going to be taking on Fly units, go for either the Icarus Stormcannon or Las-talon (depending on how tough the enemy units will be), the Skyhammer Missile Launcher and the two Assault Cannons. This will use the use the Stormhawk to its full effect, allowing it to hit Fly targets on a 2+ or 3+ and cause a fair amount of damage with its medium strength, multi-damage weapons. Against other Flyers, the Icarus Stormcannon and Skyhammer Missile Launcher are definitely the more accurate options, allowing you still to hit enemy Flyers on a 3+ on the move (at the first damage tier).

Not too much to say on this one. It seems pretty much designed to do one role in the army. If you know you are likely to be facing a lot of Fly units, I would say the Stormhawk Interceptor is a good choice. It has some great special rules to really make it effective against these units and is not too expensive an addition to the army, plus additional firepower over the Stormtalon Gunship. 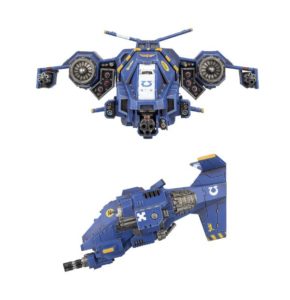 However, if you are in a situation where you know you will not be facing a lot of Fly units, or are unsure who your opponent will be from game to game (e.g. a tournament situation), then the Stormtalon Gunship or Stormraven Gunship gives you better options against a wider range of enemy targets.