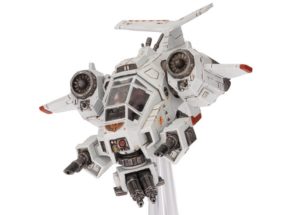 Hi everyone, Michael here with a review of one of the Space Marine flyers, the Stormtalon Gunship. This flyer provides some great firepower on a fairly durable vehicle. For more reviews, analyses and battle reports, check out the Tactics Corner.

The Stormtalon gunship is a decent flyer that can put out a fair amount of firepower and gets some nice bonuses against ground targets, making it very effective for going after infantry units. As a flyer, it also gets increased durability against most shooting attacks. The basic Stormtalon costs 165 pts, but it can get more expensive with some of the weapon options available. 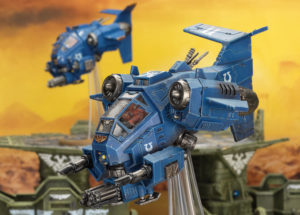 The Stormtalon Gunship is a solid flyer that is great for taking on infantry units with its basic loadout, or can be upgraded to help it take on tougher targets such as vehicles or monsters. While it does not have the durability or firepower of the awesome Stormraven, it is a good deal cheaper, making it a nice addition to a Space Marine army.

One of the biggest benefits of the Stormtalon is its mobility. While the Space Marines have many tanks that can put out equal or greater firepower than the Stormtalon, few can match its speed on the tabletop. In airborne mode, it can move up to 50″ at full strength. This allows it to get almost anywhere on the battlefield, going for optimal targets for its firepower. As it can fly, it also allows to get into useful positions, perhaps jumping behind enemy screens to target a valuable character if your opponent leaves you room in their deployment. Given the change to the vehicle rules, the Stormtalon has a 360 degree field of fire, making it much easier to fire with it every turn. This is important, as they can generally no longer leave the board, meaning you will often find yourself in awkward positions with it if staying airborne. The Stormtalon can also go into hover mode, allowing you to re-position it with great ease, though it does make it more vulnerable to enemy fire and assault. With the upcoming changes in Chapter Approved, the Stormtalon Gunship will no longer be able to hold objectives, so going into hover mode is slightly less useful, but there are still situations where it will come in handy to keep you in gun range of your target of choice, as well as improving the accuracy of your firepower. 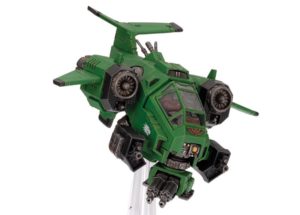 The Stormtalon Gunship is a fairly durable vehicle. It is only toughness 6 and has 10 wounds, making it slightly weaker than a standard vehicle. This will only have an effect against S6 weaponry in most cases, but given the abundance of weapons such as Assault Cannons, this may have an effect. It also benefits from being hard to hit, helping to increase your durability against enemy firepower.

But the firepower of the Stormtalon Gunship is where you will want to be looking. First off, the Stormtalon benefits from Strafing Run, giving it +1BS against non-Fly units. Given that this will probably be most targets it will want to fire at, this means you will still be hitting on a 3+ when moving (at full strength). Even better, you can choose to go into hover mode and not move the Stormtalon to be hitting on a 2+. This is great for getting a round of highly accurate firepower, and given the high range on many of the Stormtalon’s weapons, you can minimise reprisal fire and assaults from enemy units. 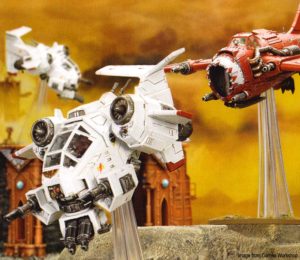 The Stormtalon comes with a Twin Assault Cannon, which cannot be swapped out. Not that you would want to, this is a great weapon, putting out 12 S6 shots with -1AP, this is good for taking on most standard infantry in the game, and can even worry vehicles thanks to its volume of shots.

It also comes with two Heavy Bolters as standard. These are also good for adding to its anti-infantry firepower, giving you a further six S5 shots, also with -1AP. You can choose to replace the Heavy Bolters with two Lascannons, a Skyhammer Missile Launcher or Typhoon Missile Launcher. My personal preference is the Typhoon Missile Launcher, as it gives you some variability. You can either add to its anti-infantry firepower, firing 2D6 S4 Frag Missiles or can go for armour-punching capability with two Krak missile shots. Given that you can now fire at different targets with your weapons, you are no longer wasting the firepower of one weapon on a less than optimal target, so can get full effect from this load out. Add the Typhoon takes the Stormtalon Gunship up to 195 pts. Expensive, but still a pretty good level of firepower for less than two-hundred points. While I may not stack up to a Devastator Squad with four Missile Launchers or four Lascannons (for a roughly equivalent points cost), you do get the added mobility and durability of the Stormtalon. Plus, with the Fly keyword, you can still fall back from combat and still fire to full effect with the Stormtalon. The mobility will be useful for getting line of sight on backfield units that are hiding from the bulk of your army, such as the wealth of artillery pieces that don’t require line of sight to fire. 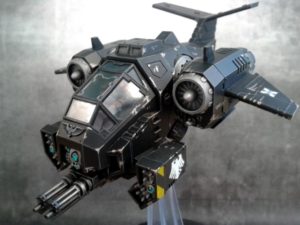 The two Lascannons are also a valid choice, giving you some much more potent anti-tank firepower on a highly mobile and accurate platform, still for only 195 points. This can make the Stormtalon great for hunting down enemy vehicles that are hidden or for getting right up close to them without worrying about getting charged in reply in most cases. The other bonus is that as you have two Lascannons and not a Twin Lascannon, you could opt to fire them at two different targets if you wished. You are probably better firing both at the same target, but there could be situations where it would be worth the risk to try and finish off two weakened enemy targets in the one turn.

I would tend to avoid the Skyhammer Missile Launcher. While it does have a very good range, 3 shots and a high strength and damage, it also suffers -1 to hit against non-Fly targets. This means that on the move, you will be hitting ground targets on a 4+. While it does get +1 to hit against Fly units, you will also not get the bonus for Strafing Run, meaning you are still hitting on a 4+. While you still get the D3 damage and the extra shot, I think you are better off with the two Lascannons or the Typhoon, rather than the Skyhammer. If you are looking to take out Fly targets, the Stormhawk Interceptor is a better choice, the Stormtalon Gunship being more suited for ground-based targets. 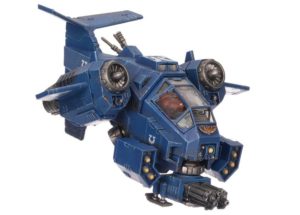 The Stormtalon Gunship is a solid flyer to add to a Space Marine army. While it is not as powerful as the Stormraven Gunship (though few things are), it does benefit from strong, accurate firepower and high mobility. Hover and Strafing Run means that it can be worth it to simply sit in place and unleash a punishing volley of highly accurate firepower at the enemy target every once in a while. I have been running one in my White Scars army and it has been consistent with its damage output in most of my games, being a worthy addition to the list.