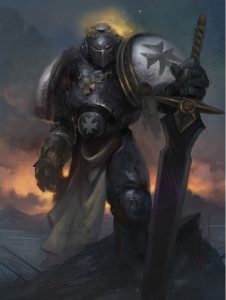 Hi everyone, Michael here with a review of the Black Templars’ character, the Emperor’s Champion. In 8th edition, he is quite a contender and a solid character to add to your army. For more reviews, analyses and battle reports, check out the Tactics Corner.

What a difference an edition makes! In 7th edition, he was a decidedly mediocre character that didn’t really see a lot of play, as he was simply too easy to kill off with Instant Death attacks. Now, however, he is a combat monster who will strike fear into the heart of any enemy characters in the opposing army.

The Emperor’s Champion is an HQ choice for a Black Templars army. He is primarily a combat character, able to go toe to toe with a number of enemy threats and come out on top thanks to his wargear and some great special rules. For only 75 points, he is an absolute bargain and I would say an almost auto-include in any Black Templars force. 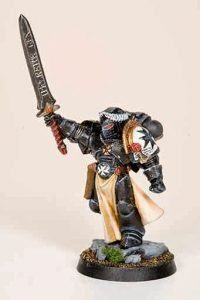 The Emperor’s Champion should be used exactly as he is described in the background, aggressively hunting down enemy Characters and taking their heads for the honour of the Chapter.

Against normal infantry, the Emperor’s Champion is a solid combat character. He comes with 4 attacks as standard, hitting on a 2+, so you can count on most of them to hit. With the Black Sword, he is S6 with -3AP and D3 damage on each wound. Against Marines and other standard infantry, he should cause a fair bit of damage to a unit in combat, even being able to threaten multi-wound models on the charge. 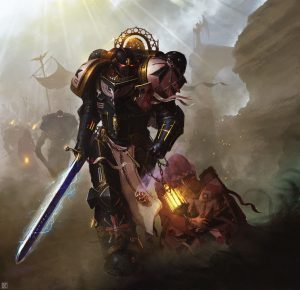 Against other characters, he turns into a combat monster. If fighting an enemy character, the Emperor’s Champion gets 5 attacks, hitting on a 2+ with a re-roll to hit. He strikes at S7 and gets to re-roll failed wounds. This means that against most standard infantry characters, he will be hitting on a 2+ re-rollable and wounding on a 3+ re-rollable, doing D3 damage with each wound. If he gets to strike first on the charge, he will be able to mess up most enemy characters, with only their invulnerable saves to protect them from harm in most cases (pity the Black Templars don’t get a Librarian to cast Null Zone. You could always ally one in, but not really in keeping with the theme of the Black Templars!).  Add in the re-rolls to failed charges and this should help ensure that the Emperor’s Champion makes it into combat.

In terms of durability, he has T4, 4 wounds, a great 2+ save and a 4+ invulnerable save. This gives him a decent level of durability in combat, especially against any weapons that lack an AP value. As with most characters, you want to have him near a supporting unit in order to prevent most enemy units from being able to target him directly with shooting attacks. 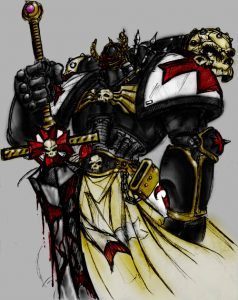 The Emperor’s Champion will work best with a support unit in a dedicated transport. The transport will help him to get into combat faster. Simply point him at a troublesome enemy character and set him loose to kill them. It will come in very handy against characters that buff enemy units, particularly morale buffs that can hamper your ability to kill off the units. He will be great for going after weak characters such as Commissars accompanying conscript blobs, or for killing of synapse creatures to make the smaller gaunts run off (remember, he also gets to re-roll failed wounds against Monsters as well as characters). A supporting unit of a Crusader squad will be a great choice for him to accompany. The squad can use their Bolters to clear out the chaff in the way, allowing to Emperor’s Champion to take out the lynchpin character models in the assault phase. In addition, in squads of 9, the Crusader Squad can still take a Special Weapon and Heavy Weapon, giving you access to more firepower than a Tactical Squad and still have room for the Champion in a transport vehicle.

While expensive, a Land Raider transport will get him into combat in relative safety, as these are quite tough to crack in 8th edition without a lot of dedicated anti-armour firepower. 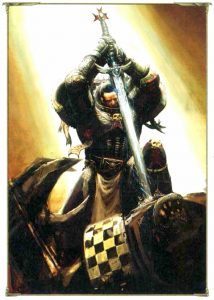 For only 75 pts, I think the Emperor’s Champion is an absolute bargain. He is a great unit for hunting down enemy characters, or even chewing through standard infantry in combat. On average rolling, he will put around 8 wounds on an enemy character in combat, with the possibility to do up to 15 wounds in a single turn. That will slay or seriously hurt a whole lot of enemy characters in the game, unless they get really lucky with their invulnerable or armour saves. The biggest disadvantage is that you cannot take him in every Space Marine army!