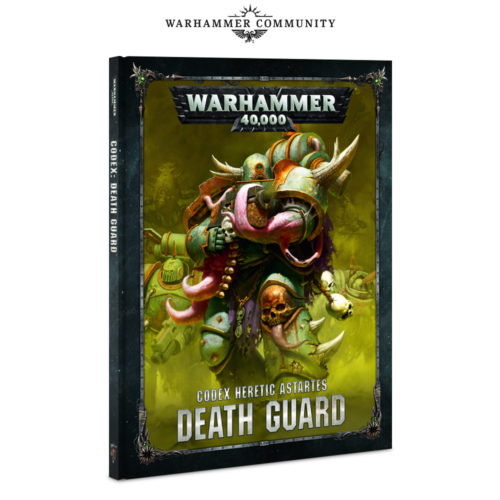 As always, Frontline Gaming sells these products at a discount in their web-cart and offers FREE shipping in the continental USA for orders $99 and up.

First off, I think we need to start with the main man: Mortarion. As all of you saw on the GW community site his stats are bananas. He is probably a little more resilient than his brother Magnus without any buffs, having 18 wounds and a 5+ Disgustingly Resilient Save makes him tough to chew through. His auras though are some of the most powerful we have seen yet. First he has the Toxic Presence ability which is -1 toughness to all enemy units within 7″. But even more powerful than that is the Host of Plagues which takes effect in the fight phase, each enemy unit within 7″ takes d3 mortal wounds on a 4+. Yikes, that is a lot of mortal wounds. Mortarian’s Damage in close combat is also good. He has 18 attacks at -2 Ap for clearing out hordes, or 6 attacks at -4 Ap, d6 damage for taking out high wound targets. Overall Mortarion is a monster and will buff the army greatly. His warlord trait also gives all plague weapons re-rolls to wound….wow. Beast mode. 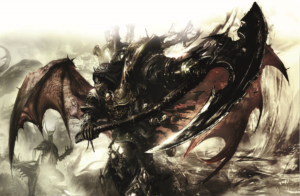 Their is a slew of new units in this book as well to make your army fun and thematic. The Plague Surgeon is one of those units and he allows you to re-roll 1’s on your disgustingly resilient saves. Another character with a crazy combo is the Biologus Putrifier who makes your blight grenades +1 strength, damage and on a 6+ to wound does a mortal wound in addition to the normal damage. This character paired up with the stratagems creates a very powerful combo, allowing an entire unit to throw blight grenades. This combined with the Veterans of the Long War stratagem gives you +1 to wound. This means every model in the unit can chuck a Blight Grenade, doing mortal wounds on a 5+, with rerolls to wound if Mortarion (or any character with the Arch-contaminator Warlord Trait) is nearby. Don’t forget rerolls of 1 to wound if a Lord, Daemon Prince or Morty are near by….

An awesome new vehicle is the Myphitic Blight-Haulers which give your infantry units within 7″ cover even if not in cover. 2+ save Plague Marines are no joke! The Blight-Haulers are also little gun boats with their missile launchers and multi-meltas.  The gunboat versoin of this new kit, the Plagueburst Crawler, has a solid artillery piece being able to hit units it cannot see out to 48″ at strength 8, Ap-2, D3 damage.  However, due to being T8 with 12 wounds, this unit plays more like a Leman Russ, moving into poistion and blasting away with a host of other, powerful weapons such as it’s Entropy Cannons which are str8, Ap-4, D6 damage and 36′ ranged. Lastly we have the Deathshroud Terminators which are complete monsters in combat (and also buff nearby Deathguard characters with +1 attack and can tank wounds for them on a 2+, too!). They all have plague pistols and Manreapers which are +3 strength, -3 AP and d3 damage. Paired with their 3 attacks they are a force to be reckoned with.

Blightlord Terminators are also pretty dang awesome, being more your “standard” Terminators but at T5 for Nurgle, a Combi-Bolters and a Balesword or Bubotic Axe which are Plague versions of Power Weapons. You can also give them a slew of weapon options including Combi-weapons, which is pretty bad ass. 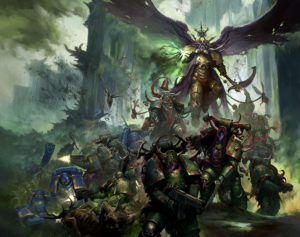 So we already touched on a couple of the stratagems but let’s dive into a few more. The Putrid Detonation stratagem is one of the best, allowing you to make one of your vehicles automatically blow up when it loses its last wound. Amazing for a Rhino or similar vehicle after it has dropped off a unit of Plague Marines! Charge it in to enemy units and make them deal with it, blowing up and taking out some of the models with you.

Another great one is Cloud of Flies which makes a unit of your choice not a viable target in the shooting phase unless they are the closest unit. This is amazingly good! If you want to run foot units, say a big unit of Plague Marines, if even 1 Poxwalkers is in front of them, they cannot be targeted at all, even by Snipers. Talk about ultimate defense. Last is the Nurgle’s Rot ability which does the same thing as Mortarion’s Host of plagues, once per game. Meaning, even MORE mortal wounds. All these stratagems turn Death Guard into a scary army that pumps out Mortal Wounds at close range in dizzying volume. 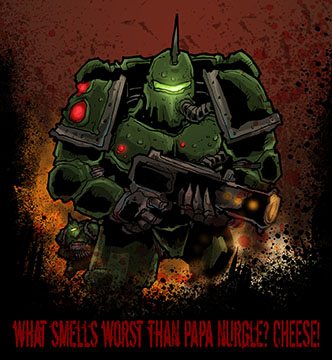 Even more Plague Marine combos (and they have LOADS of options now, what a versatile unit!): great them up for melee. Give each either two Plague Weapons (Bubotic Axe, Plague Knife, Mace of Contagion) you get a bonus attack and can get rerolls to wound with the above Warlord Trait. Toss in the Blades of Putrefaction psychic power to do Mortal Wounds on a 6+ which again, combined with Veterans of the Long War, to do mortal wounds on a 5+ and you have a unit that can rock even the toughest opponents. If you throw in some Plasma Guns and Blight Launchers to fire as you advance, the Inexorable Advance “Chapter tactics” for Death Guard detachments, you can move and fire Heavy Weapons with no penalty, advance and fire assault weapons with no penalty and double tap Rapid Fire Weapons at 18″ which is pretty dang awesome. As this applies to Infantry and Helbrutes, it makes the later fairly appealing especially when combined with the Fire Frenzy stratagem, allowing them to shoot twice (although to use it, you must remain stationary, but still a fun ability)! If the Tallyman is around–a new character–he gives your Death Guard units rerolls to hit in combat and on the roll of a 7 on 2d6, you get all CP back for a Death Guard stratagem you used. 1 in 6 times, it works every time!

As for getting across the table, they’re not so slow as you think. Toss in a Chaos Space marine detachment with a Chaos Sorcerer and Warp Time and you can get your Plague marines up the table with a quickness. I foresee waves of infantry coming up the table with Poxwalkers, Plaguebearers, and Cultists in the front, followed by the powerful Plague Marines with Terminators dropping down behind or right in front of the enemy, forcing them to be dealt with while Mortarion and Foetid Bloat-Drones (which are amazing units and now have the option for the funny “Fleshmower” upgrade which looks exactly like it sounds!) hit hard in the most vulnerable locations. 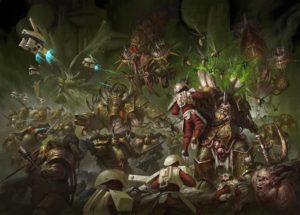 The codex comes with its own relics of decay as well. The Suppurating Plate is probably the strongest relic in this book giving one of your characters a 2+ save. On top of the better save it allows you to do mortal wounds in the fight phase on a 4+ for every armor save you pass. Slap this on a Daemon Prince and go to town. Fugaris’ Helm is another item you will see frequently, increasing the aura range of a character by 3″ that changes most of the aura’s in here to 10″. Dolorous Knell is a powerful tool forcing your opponent to roll two dice and pick the highest when taking morale checks within 7″. It also does a mortal wound on a 6+ to a unit in the moral phase. 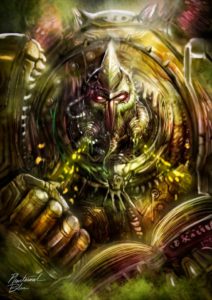 Death Guard also have some powerful psychic powers and a new spell-caster, the Malignant Plaguecaster from the starter box. Miasma of Pestilence gives your opponent minus one to shoot at one of your units. Blades of Putrefaction gives +1 to to all wound rolls made by one of your units in the fight phase, and also they do mortal wounds on a 7+ with plague weapons in the fight phase as stated above. Putrescent Vitality makes one of your units tougher giving them +1 strength and toughness. Last but not least we have the Curse of the Leper which you roll 7 dice and every roll that exceeds the closest enemy’s toughness does a mortal wound. That power paired up with Mortarions’ Toxic Presence makes for a powerful combo. 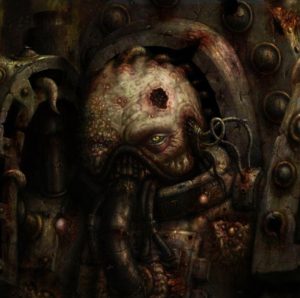 All of the warlord traits are quite good. Revoltingly Resilient gives your warlord +1 to his Disgustingly Resilient saves bringing it to a 4+. Tainted Regeneration allows your warlord to heal a wound at the start of each player’s turn. The most powerful though is the Arch-contaminator which is the same one Mortarion has giving all of your plague weapons re-roll to wound.  Some powerful traits in there. 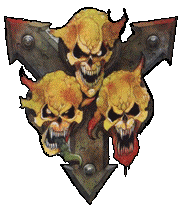 Death Guard have some crazy combos and allow you to play an infantry force that can walk up the table dishing out as much punishment as it takes. Plague Marines are much improved, in my opinion, and can run in mobs on foot or mounted up in Rhinos to great effect. With loads of options between mortal and daemonic units this feels like a full army, not just an offshoot of the Chaos Space Marine codex. I think Death Guard players have lots to be happy about.

Moration is going to be brutal and as our friends over at the NOVA Open staff said, pairing him with Magnus in a Chaos soup army will yield the mighty and terrible MAGNARION! Like the Wonder Twins, it will be equal parts ridiculous and annoying, but unlike that dynamic duo, also very powerful.

Thanks for reading, and prepare for the forces of Nurgle to come to a table near you.