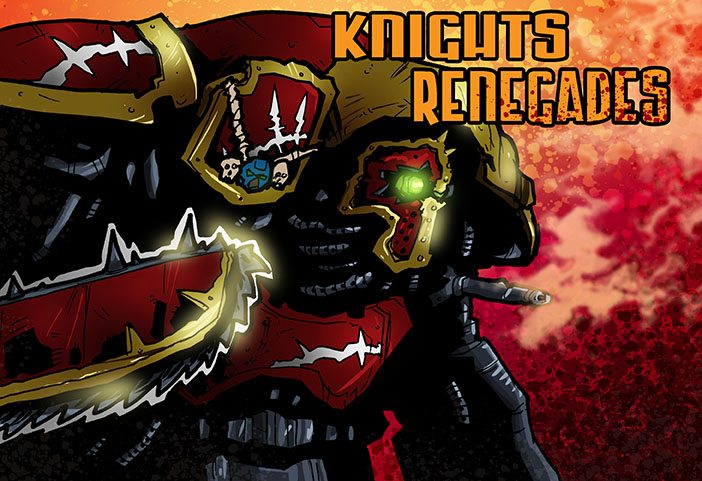 Wow it is amazing how a new edition revitalizes an army.  The Chaos Space Marines are looking to be pretty awesome as of late and the Renegade Knight is something that fits very well in most flavors of the “Bad Guys” of the universe.  While we do lose access to the “daemon knight”, Chaos kept the very customizable Renegade Knight (not Renegade Legion Knight – which would have been awesome).  Lucky for us the basic Index for Chaos had the datasheets and points for our favorite engine of destruction with all the old options available.  So with that in mind – let’s get onto the review shall we!  As usual you can read up on more tactics at the Frontline Tactics Corner.

The Renegade Knight is basically an “Evil” Imperial Knight.  Its weapon load outs are almost exactly the same and instead of making a Renegade Warden/Errant/Paladin – GW decided to just make one version with the ability to upgrade all its weapons.  This also means that it now has the option to have 2 of the same gun on each arm which makes it different from the Imperial counterpart.  So yes – Chaos did get something “better” then those pesky good guys. The Renegade Knight is one of the other non Forge World super heavy options for basic Chaos Space Marine armies.  At least in the context of the straight Index releases.  With the Chaos Space Marine codex coming out – the Renegade Knight is most likely limited to a combo within a Super Heavy Detachment or some kind of “extra” bonus when added to a Supreme Command option.  The issue with the Super Heavy Detachment is needing to take 2 other Super Heavies with the common theme either taking Magnus, a Double Gun Knight, and then some kind of fancy FW super Greater Daemon.  You can also take this guy in a single Super Heavy choice – but as you are limited to 3 Detachments in a matched play army it gets hard to have all those delicious Command points at your disposal.

The set up for the Renegade knight is a heck of a lot easier then any other.  You take the basic Gallant shell and have the ability to swap out both arms.  This is huge as it is a simple way to get all the Knights into Chaos and gives the Chaos player a chance to have a slightly different Knight (2 of the same weapon on both arms)  that is unique from the normal Imperial Knight.  In some ways I kind of hope we see some Renegade Knights in the upcoming Ad Mech book with a push into Dark Mechanicus flavors.  It would be pretty interesting to see some Knight Stratagems as well as options for some fell relics. The damage table for the Knight is pretty harsh as they get pretty terrible when heavily wounded.  As usual they do fine until they take half damage.  At 24 wounds and Strength and Toughness 8 it does take awhile to hurt these guys.  The 3+ armor save mixed with an all the time 5+ inv versus Shooting attacks does mean this guy takes a bit more concentration to knock down.  Though once you get him wounded halfway it makes it a lot easier to corral and wrangle this beast as he is normally backing up to try and save himself.  Thankfully his movement of 12″ can’t be boosted by Warptime or else we would see a lot more yolo knights barreling into your opponents army and trying to wreck their business. This guy is a Titanic vehicle so he comes with a ton of rules.  8th edition really changed how these monsters play and while in some ways they are better in others they have less of the “oh crap you just rolled 6’s I guess I lose”. The Renegade Knight adds a big counter punch to most of the “evil armies”.  The biggest help is that they give Chaos access to 1-3 super heavy Vehicles that are not limited to events that allow FW experimental rules or are not always the best option available (Khorne Kill Dozer).  They also can add a lot of firepower to the army that tries to utilize some blobs of models that cover the table but are not too good at killing stuff.  Currently the types of lists I have seen are in either Mixed soup army detachments or extreme builds utilizing Maguns and two Knight friends.

The idea here is you have a good sold back of Objective Secured guys as well as multiple uses of the Changlings ability.  Magnus is there to throw out Smites as needed and some of the other clutch powers from the Hereticus discipline.  The other Daemon Prince gives you a nice “helper” option to let Magnus hopefully not get bogged down.  The Nurglings are there to keep infiltrating and Teleport armies in check as they can gum up the middle a bit and give your army some breathing room.  The Knights themselves are there as mobile battle stations ready to dish out damage and sometimes charge in as needed.

The next list thought would be some kind of bowling ball of Doom idea.  Most likely using Renegades to try and create this Ball of Death with Close Combat knights, some Helbrutes, and maybe some Cultists to make sure the Battalion has enough Command points. This idea is just to go big and hard into your enemy with a ton of huge knights and then a blob of Zerkers followed by their Sacrificial Cultists.  Huron is there as he can get a psychic spell, go for Warptime, and double move the Zerks with two Moves and Advance moves as it is supposed to act like a movement phase.  As you can advance and assault with Renegades you have a good chance of going 12 + 2d6 and then charge another 2d6.  That is some spicy meatballs.

Overall Renegade Knights are not too bad and I think they are a great “support” unit.  You really need support with your Knights so while it is fun to run all big monsters it probably won’t win you the games you want to become the king of the ITC.