With a several games and a GT under my belt, it is time revisit the Drukhari. In my previous articles, I worked from the various updates from the Warhammer community page. As many have experienced, the depth of the new Warhammer is not in the rules but on the table. It is time share some of my findings with you. Check the Tactics Corner for more articles!

This week we will focus on the Covens Units. 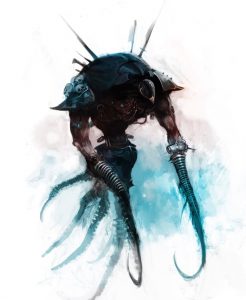 Coven units are interesting in that if you piece together all of the overlapping buffs you can easily create many of the formation benefits from 7th ed. The Haemoculus increases the toughness of all coven keyword units by one, which is huge. Wracks, which are back in the troops slots, serve a similar role as Wyches as a screen or objective holding unit. With their leader nearby, this boosts them to T5 with a 5+ invulnerable save and ignore wounds on a 6+ thanks to Power from Pain. Unlike wyches, wracks can use these benefits against shooting & melee attacks. Wracks like wyches need to get into close combat to damage the enemy, as their wrack tools wound all non-vehicles on a 4+ and do not come with any shooting weapons. There is an option to add the Ossefactor or the Liquifer gun. The Ossefactor gives the option to put additional mortal wounds on a unit, but lacks the rate of fire to do this reliably. The Liquifer gun is a flamer style weapon that could help on overwatch.

For those you who miss the old Dark Artisan & Corpse Thief Claw combo, Games Workshop cleverly hid it here in the new index. Take a unit of Talos, which like all coven units come stock with Power from Pain and a 5+ invulnerable save, and kit them out with dual macro scalpels to maximize the number of attacks. Add any of the assault weapons such as a heat lance or haywire gun. This will allow your Neo-Claw to advance and fire (hitting on 5’s) as they close in on their prey. They will not hit often, but when they do, it will leave a mark. Back them up with a Cronos and a Haemoculus, which will boost both pain engines to T7 and the Cronos will allow you to reroll 1’s to wound in the fight phase.

Oh, but we are not done yet.

The Power from Pain grants all three units the ability to ignore wounds on a 6+, reroll advance and charge rolls, +1 to hit in the Fight phase, ignore morale test, and lower my opponents Leadership by one. The special sauce is the Cronos needs to get in to close combat as well. For each unsaved wound they inflict, they heal one wound on a Drukhari model within 6”. Since this blob is all multi-wound models, this comes in handy. The added bonus is if you do lose any of the pain engines, they can explode taking out more of the enemy is their final gasp. Best use for this arrangement is for board control, usually at center field. It has the same footprint as a 10-model unit to use as an expensive screen. Just beware units can fall back leaving you out in the open. They can stand up to bolter fire but your basic plasma, melta, or even deathwatch special ammo can delete them quickly.

The Haemoculus has a hidden surprise in the psychic phase. The Crucible of Malediction is a one-use weapons that inflicts mortal wounds on all psykers within range, bypassing the rule that characters must be the closest model to target. It is not quite powerful enough to outright kill most psykers, but it can drop them to far enough to think twice about close combat or possible perils of the warp. The named Haemoculus Urien trades in this goodie for a 4+ invulnerable save and a nifty ability to reroll armor saves from weapons whose strength is less than 9. So stay clear of any Dreadnoughts. 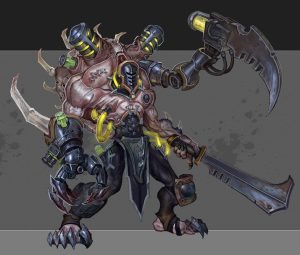 Finally, we get to Grotesques. They are similar to the Talos in that they hit like a train in close combat and benefit from all the buffs described earlier. They do not have an effective shooting option, but they can ride in Raiders, giving them superior speed and firepower from either the ceramite splitting Dark Lance or the Primaris deleting disintegrator. You can fit 5 comfortably, or rock 4 model units with a personal Haemocolus. The Raider will get more attention later in this article, but make sure you disembark prior to your opponent counter assaulting your ride. If you fall back, you cannot charge until the following turn.

I felt like Grotesques actually got worse with this edition. They lack rampage and a natural reroll to wound against t4 and lower, not fearless turn 1, and cost more points. I hope the Codex gives them more options.

Small request, could you change the article series tile to “Newhammer” instead of “New Hammer”? I keep getting mixed up and thinking “New ‘Hammer Coven’ Units”.

No need to even say new hammer, anymore. That was just before 8th dropped.