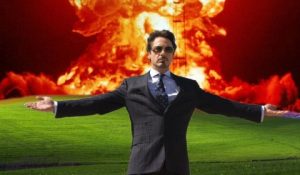 The Adeptus Astartes are some of the most formidable warriors in the Imperium of Man. Massively strong, with speed and reflexes that surpass a normal human many times over, and enhanced intelligence they make for implacable warriors. Even among the Space Marines though are some who rise to the top, who show even greater skill at close quarters combat, and ranged ability; these warriors are often chosen for a Chapters First, or Veteran, Company where they learn to use the best weapons at the disposal of the Chapter.  Among these weapons systems are the ancient suits of Tactical Dreadnought Armor, more commonly referred to as Terminator Armor. Three types of Terminator armor are generally employed by the Chapters loyal to the Emperor, Standard, Cataphractii, and Tartaros. Each has their advantages and drawbacks. Normally a stat like Movement isn’t that important to one of these articles, however the different patterns of terminator armor have different movement stats, so pay attention to that as it is actually an important part of fielding terminators effectively.

Standard Space Marine Terminators wear the Indomitus pattern Tactical Dreadnought Armor which is deployed in two variants; the “Terminator Squad” which is a unit that focuses on shooting with some close combat punch, and the “Terminator Assault Squad” which eschews all ranged weaponry in favor of potent close combat weaponry. Both units fulfill interesting and important roles in a Space Marine army. With good basic saves, access to Invulnerable Saves, and 2 wounds these units can take and give a punch. They make great counter assault units, and with their teleportation, make for strong harassment and objective grabbing/clearing units. Indomitus pattern Terminators are the most common form of Terminator armor found in the armories of the Space Marine Chapters of the 41st millennium, the templates for the construction of Indomitus pattern TDA is widely available to the Mechanicum Forgeworlds in the 41st Millennium. 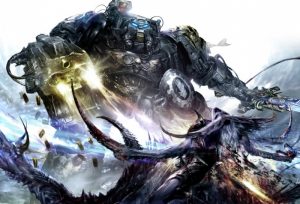 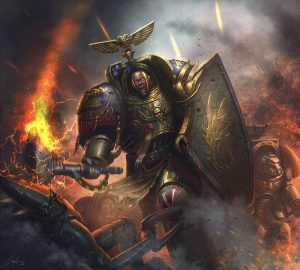 If you’re looking for a unit that can really clear some models off the table after teleporting in from reserves and stand a decent chance of surviving then Terminators might be for you. With Stormbolters, Assault Cannons, and Cyclone Missile Launchers shooting Terminators can help chew through all those pesky Cultist and Brimstone Horror screens that are running around. Not to be overlooked is their potency in Close Combat. With powerfists a plenty, and 12 point powerfists not 20 like in the index, your opponent will be forced to pull models from the front of their units when you shoot at them instead of the back in order to keep the Terminators out of charge range. Don’t forget that you can always burn a CP in the Charge phase to re-roll a one of the two die rolls to charge! One option on for them is a Heavy Flamer, but as it is a 8 inch range and you must drop in 9 inches away there’s not much point in taking one. With 10 man squads large footprint, especially now that in 8th you can spread them out and no longer have to deep strike in a circle, they can act as a counter screen that can land in front of the enemy army and demand to be dealt with. When you couple the 2+5+, 2 wounds, Powerfists, and array of shooting Terminators provide a great unit to drop in and force your opponent to deal with.

If you like really durable, and very potent close combat units, then Assault Terminators might be for you. While they have no ranged weaponry a unit of 5, or 10, Assault Terminators with a high number of Storm Shields will provide head aches for your opponent. 2+3+ and 2 wounds is nothing to sneeze at this edition. In fact Storm Shield equipped Assault Terminators are one of the few units in the game that can boast a 3++. Lightning Claws are also nice to have in Close Combat as they give the models a re-roll to wound, and re-rolls to wound are difficult to come by in 8th edition.

Terminator, and Terminator Assault Squads also have access to Teleport Homers. Something the other two types of Terminators do not have. Teleport homers can be set up anywhere in your deployment zone, then instead of moving, once per game, the unit of Terminators can be removed from their place on the board and placed within 6 inches of the teleport homer. The teleport homer is then removed. This is a neat tactic as it can get your last few terminators out of harms way and near your home objective, re-position the unit to counter assault, and it can be done instead of Fall Back for a unit of terminators in combat, meaning they can still shoot and charge as normal! 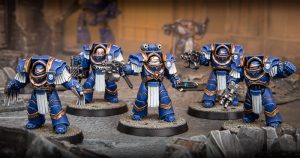 Cataphractii pattern Tactical Dreadnought Armor, or Terminator Armor, was the first Terminator armor developed by the Mechanicum during the Great Crusade. Originally desinged as a hybrid of Dreadnought Armor, Power Armor, and Heavy Environmental suits used by humans for millennia to work in the harshest environments; these suits of armor were designed to help stem the tide of casualties among the Legions as the pace of the Crusade began to wear on the Legions numbers. Cataphractii armor provides better protection than the newer Indomitus pattern but at a cost, the Space Marines who war the armor are often slower in movement than their brethren in Power Armor or even the more common Indomitus pattern Terminator Armor. 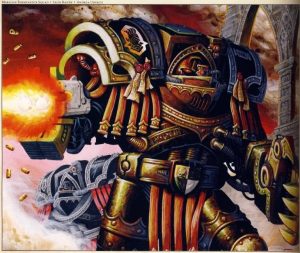 If you’re looking for terminators that have decent firepower and increased durability in game then Cataphractii Terminator Squads are for you. While they lack Assault Cannons they do have combi-bolters. Combi-bolters are 24in range Rapid Fire 2, meaning that when you drop them in they’ll get 2x the shots of the normal squads with just Bolters. The other great thing about them is you can replace the Powerfist on them with a Lightning Claw, and you can mix and match the units how you see fit! This gives you a unit that can chew through squishy units like Conscripts in the shooting phase and tear through units in Assault as well! When you combine this with the 4+ Invulnerable save you get a unit that hits harder and is more resilient than the regular Terminators. The draw back to this is movement. You do sacrifice a bit of movement, they are M4, and you must halve their distance when advancing. For a unit that is more than likely dropping in from reserves though this is a much smaller issue.

How to run them? Simple, I like to take 5-10 of them with a mix of Power fist, and Lightning Claws. I even like to take a few with double lightning claws. A great part about this edition is you don’t have to charge what you shoot so you can drop a large unit of terminators down, spread out, and unload their combi-bolters into a unit and then charge a unit that is on the periphery of the unit. Be sure to save that CP for re-rolling the one die to charge that might make all the difference! The only Heavy Weapon available to them is unfortunately the Heavy Flamer which is a useless tool to pay points for with the current Reserve rules. 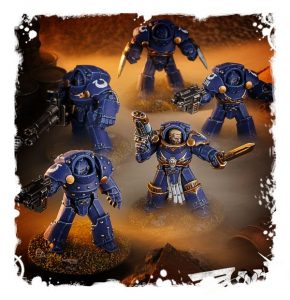 Tartaros pattern Terminator Armor is the rarest, and most advanced, Tactical Dreadnought armor developed by the Mechanicum. It used many of the features that made the Mk IV pattern power armor so widely desired by the Legions during the Great Crusade. Unfortunately the manufacture and equipping of ths pattern of Terminator armor was disrupted by Horus’ treachery and very few suits of Tartaros Pattern Terminator armor were manufactured and survived to see battle in the 41st Millennium. Tartaros pattern TDA provided the wearer with increased mobility and speed over the Indomitus and Cataphractii patterns without sacrificing any of the protection.

The Tartaros Terminator Squad may be the best all around Terminator Squad available to Space Marine players now. They provide the better firepower of the Combi-bolter with the benefit of access to the Reaper Autocannon, Plasma Blaster and Lightning Claws with increased speed over both other patterns. While the Assault Cannon, may be an all time Space Marine favorite the Tartaros Terminator Squad packs more punch over the Terminator Squad and Cataphractii Terminator Squad. They have the Rapid Fire of the Combi-bolter and the Reaper Autocannon with it’s Heavy 36in range, Heavy 4 S7 Ap-1 D1 and the option for the sergeant to take a Plasma Blaster for 18 inch range Assault 2 S7/8 AP-3 D1/2. While they don’t have the 4++ save of the Cataphractii terminators they do have a Movement rate of 6in instead of the 4 and 5 inch ranges of the other two patterns of armor.

If you’re taking Tartaros Terminators I suggest going whole hog on the 10 man unit to get double Reaper Autocannons. Throw the Plasma Blaster onto the Sergeant and sprinkle in some Lightning Claws for a unit that can put out a ton of firepower on the drop in and deal some serious pain in close combat as well. If you remember to spread them out like I talked about above, and charge units on the periphery you’ll be set. Another key thing to remember is that not all the models in the unit need to shoot the same unit anymore. So you could fire 7 Combi-bolters at a unit of conscripts, dealing quite a bit of damage, and fire the Reaper Autocannons and Plasma Blaster at a more durable unit like light vehicles, dreadnoughts, other heavy infantry. Point for point the Tartaros Pattern terminators are probably the best deal in the Space Marine codex when it comes to Terminators.

So what do you think about the new options for Terminators in 8th edition?

4 Responses to “Forces of the Imperium, Adeptus Astartes, Terminators Review.”