Hello everyone, it’s Adam from TheDiceAbide, and it’s been a LONG time since I’ve written about 40k, but with the hubbub of the new edition, I figured it was time to give it another shot.

For those newer readers, this used to be mainly a 40k blog, then Warhammer Fantasy, and back to 40k, though for nearly 2 years I’ve focused entirely on Infinity. I used to have an insane amount of 40k really, over 30,000 points of Chaos, plus some Imperial Knights, and their Imperial allies. Over the last couple years though, I’ve downsized to just my Imperial Knights and Inquisition, which I mostly kept due to loving the miniatures, and being quite proud of the work I put into them.

Anyhow, enough with the The Dice Abide history, lets get into this new game. Last night I played my very first game of the new Warhammer 40k. I don’t want to call it 8th edition, because this is truly a very different game than any previous version, and I’ve played them all.

First, lets talk a bit about the game I played. Last night, my buddy Alex came over to teach me the game. He brought a Necron army with a fair bit of Forgeworld units sprinkled in, and I assembled a somewhat optimized list of Imperial Knights with Inquisition allies, which you can see here (The WIP Land Raider is an Inquisitorial Prometheus). 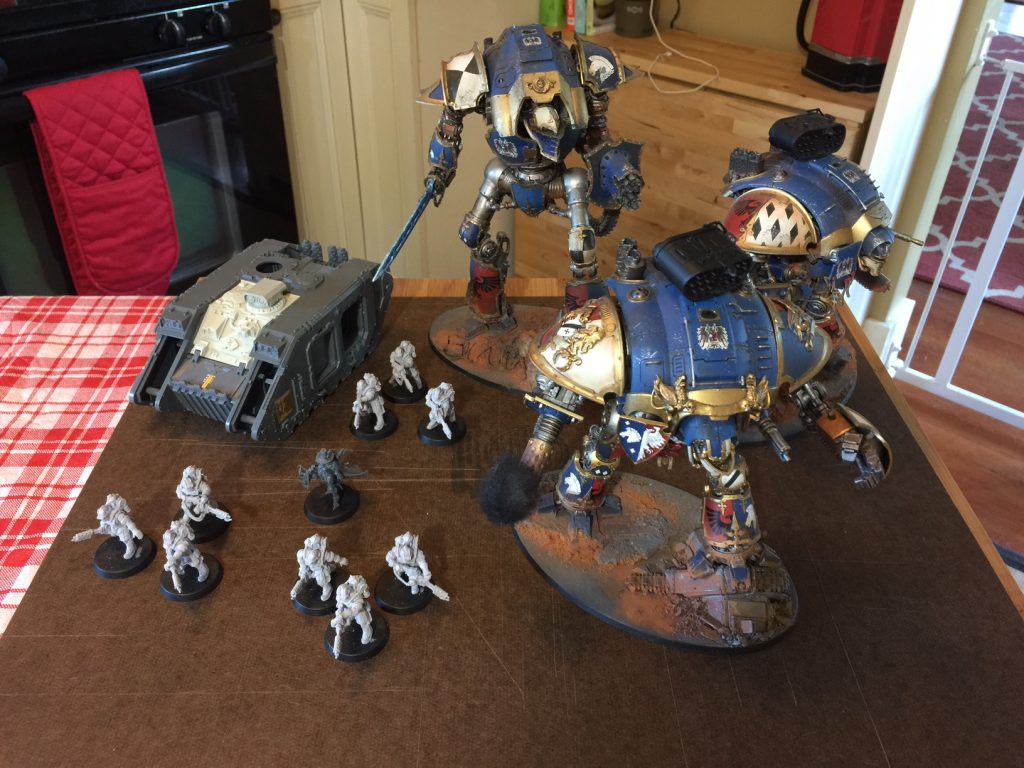 Our game lasted 5 turns, by the end of which which, I had lost one knight (the Errant), and most of my Acolytes, while the Paladin was crippled, and the Castigator was reduced to a single wound. It was a fun game, with ups and downs, as we battled to control 4 objectives across the table. Ultimately, Alex controlled 3 of them, while I only controlled one, though scored First Blood and Slay the Warlord.

My first reaction to the game was that it’s incredibly abstract. Coming from Infinity, where LOF (Line of Fire) is very precise, I was caught off guard by Necron Doomsday Arks poking a tiny sliver of their prow around the corner to shoot. Other abstractions that caught me off guard was the parking lot of tank on tank combat, nobody wanting to retreat from combat, or vehicles driving up sheer cliff faces to move onto the higher ground. Some of the abstractions, like LOF are easy to write off, like, not everything is actually totally static, and model positions and movement are there for restrictions, but in actuality it would be driving around, or popping up to shoot before ducking down, etc.

Now, that said, abstraction is not a bad thing, just something I’m not used to. Abstraction is critical to writing a rules system that plays fluidly with the number of miniatures you’re expected to typically play with in company-scale games like Warhammer 40k and Age of Sigmar, and I actually like that GW is using a healthy amount of abstraction to improve the quality of their games. I found the random shots for flamers to be pretty solid, while the random number of shots for the Thermal Cannon made it seem incredibly anemic.

Overall, I thought the rules were pretty good overall, especially when compared to 40k7E, but there were definitely a few things that I found to be anything from mildly annoying to totally perplexing. First of all, tank-on-tank combat, or tank-vs-infantry combat just seems clunky… A Land Raider “retreating” from combat with a bunch of hormagaunts just seems silly, and might not even be possible because they’re in it’s way? I understand removing the tank shock rules from before, but really, that thing should either just run over whatever is in it’s way, or be allowed to retreat through troops. For that same matter, the tank not being able to shoot because enemies might be too close to it’s guns also feels wrong, especially when it’s a massive array of machine guns like on a Land Raider Crusader.

Another rule I found totally perplexing is that flyers are unable to leave the table without using the Death from the Skies rules. If a model is forced to fly off the table due to minimum movement, it is destroyed as per the Minimum Movement rules. I strongly feel like the Leaving Combat Airspace rules should have been part of the core rules, it’s far more cinematic and makes more sense than having what feels like a swarm of large plastic gnats hovering over the table. 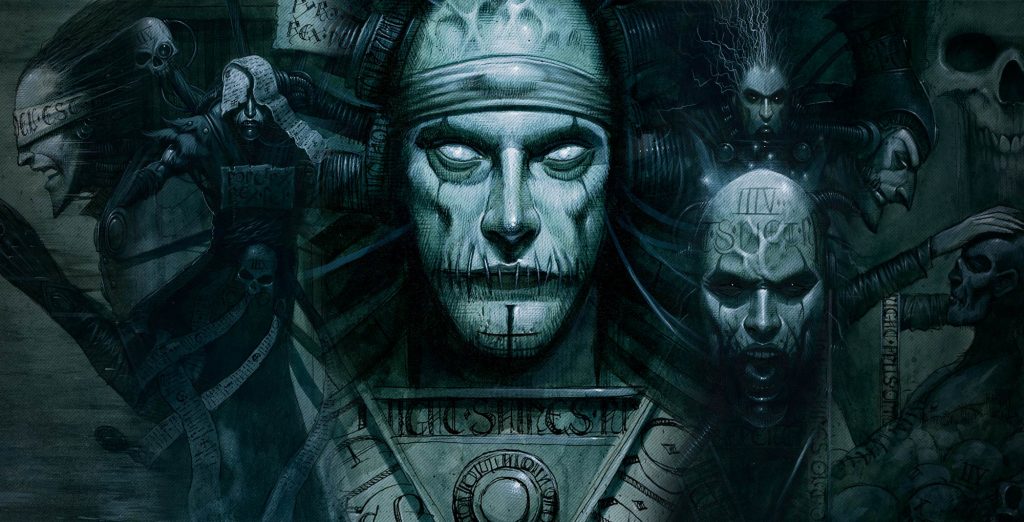 The new rules of 40k have the potential to bring in a new golden age of the game. They are streamed lined and abstract enough to play a game with a good number of models quickly and without many hang ups. I personally found my Imperial Knights to still be enjoyable as large, stompy robots, even if they did feel a bit rubber-fisted in combat, unable to kill a vehicle reliably in one turn (at least the Quantum Shielded Necron variety), and not killing as many infantry in melee as I’d expect. The Paladin was the man of the match though, it’s Rapid Fire Battle Cannon dealing devastating damage across the board, while the Errant was the chump, not contributing in any meaningful way, other than as a bullet sponge. As I said, I only one game under my belt, so I’m sure my opinion of the game will evolve with experience and time, and I’m looking forward to getting a more games in soon.