Hey everyone, Josh here to discuss the units that are available in the Blades of Khorne. This is the first article about a daemon unit, and we’ll be discussing Bloodletters. For more tactics articles, check out the Tactics Corner!

Arguably the most iconic unit in the Blades of Khorne, Bloodletters are born from the wrath of khorne himself. Khorne is so hateful that his feelings congeal into daemons. These suicidal manifestations of hatred swarm the battlefield and compete to commit ruthless acts of brutality to please their god. 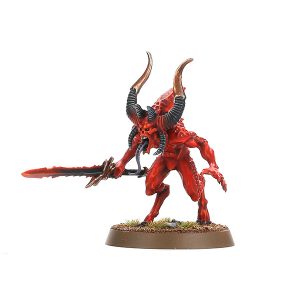 Bloodletters might sound like mindless killing machines and for the most part they are, but they’re actually more intelligent than you might imagine. Bloodletters are known to speak the common tongue. They’ve also been known to deceive or lie in order to spill the blood of their victims.

Bloodletters are the best for dishing out a healthy serving of mortal wounds while being buffed by an arsenal of support units. They play a crucial role in the Khorne army that can only be partially substituted by Skull Reapers. In a meta where it seems everyone is buffing their save roll, these guys have a relevant niche.

Bloodletters can kill or cripple just about any unit in the game, but they die like flies when they’re attacked. They’re a glass cannon. You’ll typically you’ll see them in large units flying or dashing across the battlefield to cripple enemies on an early alpha strike. If you hit your opponent hard enough, hopefully they won’t be able to retaliate.

Bloodletters have three abilities that make them stand out: Decapitating Blow, Murderous Tide and Locus of Fury. These three abilities combined along with some significant buffs to hit rolls and attacks make Bloodletters an extremely reliable source of damage. Running bloodletters in a unit of 20+ models is recommended if possible. A unit of 30 can kill almost anything unit in the game. When their hit rolls are properly buffed with Rage of Khorne and Lord of War or Slaughterpriest’s Killing Frenzy, you can easily send 40-50 mortal wounds straight into the heart of your enemies’ forces. 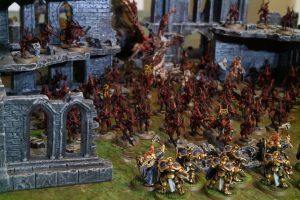 The Rules Lawyer: I often see people playing the Decapitating Blow ability incorrectly. So, just to clear the air, let’s check out pg. 4 of The Rules:

“Some attacks inflict mortal wounds. Do not make hit, wound or save rolls for a mortal wound – just allocate the wounds to the models from the target unit as described above.”

When you make a hit roll of a 6 or more after modifiers, you do not have to make the wound rolls for those hits to determine that they inflict a mortal wound. Instead they immediately deal a mortal wound to the enemy unit.

Bloodletters also have a high model count that compliments the Khorne armies’ buff stacking strategy. Out of all the units in the Khorne army, Bloodletters are the most explosive when it comes to buff stacking. They double their damage output while buffed by Bloodsecrator’s Rage of Khorne, and they provide a reliable mortal wound outlet if buffed with multiple stacks of killing frenzy.

Bloodletters have a 5+ save, 1 wound per model and a 5” move. They’re slow and they get attacked they’re probably going to die. Keep your bloodletters safe until you can strike your opponent with them. Use buffs and battalions that provide additional mobility to make sure these guys strike hard and fast before your opponent has an opportunity to react.

20-30 Bloodletters have a habit of over-killing their target and getting killed by an opponent’s alpha strike in subsequent turns. Pick your targets wisely. Additionally, consider them in units of 10 to break your enemy’s front line if necessary. 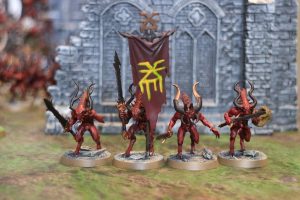 Units that disrupt charges or combat (examples: Fanatics, Bloodwarriors or Aetherwings) are a Bloodletter’s worst nightmare. Avoid alpha striking units that deal lots of damage when they die and outplay charge disruption by buffing your charge with abilities like Bloodstoker’s Whipped to Fury, Wrath of Khorne Bloodthirster’s Lord of the Bloodhunt or the Talisman of Burning Blood. Just take a calculated risk and start your charge phase in a position where it’s unlikely that your opponent is able to disrupt you.

The worst thing about bloodletters is their sculpt. Don’t get me wrong, I love the look of the bloodletter on the front cover of the blades of khorne. They have this cool bloody xenomorph feel to them, but these models just don’t do the unit justice. They’re scrawny and weak looking, and the mold is off center. Every box I’ve purchased has had horrible mold lines. I’ve painted 70 of these little daemons so far, and I think I spent more time scraping than painting. I love these guys, and I want a new scuplt!