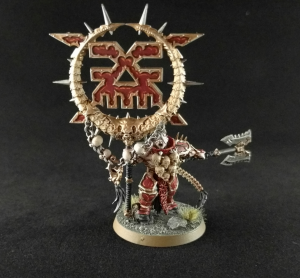 Hey everyone, Josh here to discuss the units that are available in the Blades of Khorne. For this article I’ll be discussing my very first hero unit, the Blooddecorator… erm Bloodsecrator! For more tactics articles, check out the Tactics Corner!

Before you read: Let me start by saying that I cannot tell you how difficult this article was to write.  I don’t use multiple Bloodsecrators in my competitive army. This is because more than one is not needed, and I’ll go into great detail with math and game theory in a separate article to illustrate this. Therefore, I have no vested interest in the Bloodsecrators’ Rage of Khorne stacking, and I want you, the reader, to understand that. My hope is that someone in GW will read this and provide us with proper rules errata to correct the issues with this unit.

Another one of my intents is to review this unit objectively. I’m not going to provide you with lists. I’m not going to be going into great detail about how to use this unit in battalions or with the new totem artefacts.  I’ll review those things in separate article. The reviews I write are to help players think for themselves in an objective and independent manner.

Bloodsecrators are the centerpiece of any Bloodbound army. They stand amidst the horde of blood-thirsty warriors carrying a profane artifact of Khornate power. When thrust into the earth, these artifacts tear a rift in the veil between the Chaos and Mortal Realm to unleash the incandescent rage of Khorne and send the warriors of the blood god into to a crazed murder lust. 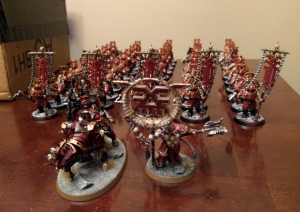 Bloodsecrators are a force multiplier. They rarely fight or move. Rather than relying on their own strength, they rely on bolstering the strength of the other units in your army.

The first half of Rage of Khorne is often the most popular part of the model. Adding 1 to the attacks characteristic to all melee attacks during the combat phase is an extremely potent ability for hoarding units. Focus on making use of this with high model volume units that have one or two attacks per model (Examples: Bloodletters, Bloodreavers and Bloodwarriors). 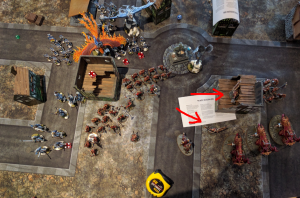 Two Blooddecorators decorating a home with blood while the High Aelves disturb the peace.

The second half of Rage of Khorne is often overshadowed by the first, but it’s just as important. Khorne typically plays high model count maximum size units that are extremely sensitive to battleshock tests. Don’t take this for granted.

Loathsome Sorcery isn’t usually a big deal. Most of the time your opponent is using balewind vortex to circumvent the ability, or just avoiding it altogether, however extending the range on this ability to 36″ with the Gore Pilgrims battalion can be very irritating to your opponent.

Bloodsecrator is dwarf-slow, and while he’s using his Portal of Skulls he cannot move, run, charge or pile-in. I recommend planting your banner as soon as possible. Consider permanent placement during the set-up phase and be cautious. This guy can often be the lynchpin for your entire army. If you need to move him, you’re probably best saving 3 bloodtithe points and moving him during your hero phase so that you can re-open the portal.

Bloodsecrator has a low wound count for a hero. If this guy had 6 wounds, he’d be infinitely better. Try to keep him out of harms way for at least the first turn. 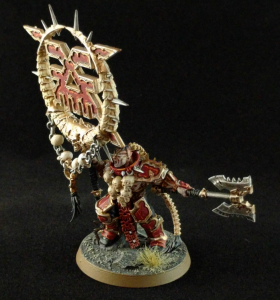 The worst thing about the Bloodsecrator has to be the huge lesson it teaches us about what happens when we are given ambiguously written, inexplicit rules. The debate over whether you can stack multiple instances of Bloodsecrator’s Rage of Khorne is a hot one, and it needs to end soon. The warscroll is not explicit at all. Without GW’s help, the debate over the Rage of Khorne will probably continue to rage on (get it?).

The Rules Lawyer:  First let’s look at the wording of the ability, Portal of Skulls.

“In your hero phase, you can declare that this model opens the Portal of Skulls. If you do, until your next hero phase you may not move the model, but it has the following abilities: Loathsome Sorcery and Rage of Khorne”

The key thing to take from this is that the ability enables Loathsome Sorcery and Rage of Khorne until your next hero phase. While it doesn’t say it, your Bloodsecrator effectively lifts his banner at the beginning of your hero phase. (if you have spells cast them before putting it back down). Now let’s take a look at the wording of the ability, Rage of Khorne:

Key things to take from this are that Rage of Khorne doesn’t care if units are within range of the Bloodsecrator for the additional attacks. Rage of Khorne only cares if units were range to be affected in the beginning of the combat phase. It also cares if you’re in range when determining whether or not your units need to take battle shock tests, but really this is a separate ability. I’m not sure why it was shoehorned onto this one.

Now, the interpretation of Rage of Khorne typically falls into two camps.

Given the current wording the second interpretation makes sense to me for a variety of reasons.

I’m often asked why I don’t play with it as these unnamed sources say it was “intended”. First off, I don’t think Bloodsecrator is ruining the ranged unit meta. Second, GW has room to improve when it comes to timely updates of the rules and errata. Third, playing the role of an enabler does not help anyone improve. As players we shouldn’t be expected to read the minds of developers, and if we want them to improve their rules writing then I think we need to hold them accountable by following the rules they write until they correct them. For this very reason, we focus on the rules as written on our youtube channel (Masterpiece Miniatures).

What kind of jerk would I be if I provided criticism without a solution? If I were to re-write these abilities so that they didn’t stack, they would probably read as follows:

Loathsome Sorcery: Players must re-roll successful casting rolls for wizards within 18″ of any Bloodsecrator with an open Portal of Skulls, before any attempts to unbind are made.

Rage of Khorne:  At the start of the combat phase, Khorne units you control within 18″ of any Bloodsecrator with an open Portal of Skulls add 1 to the attacks characteristic of all melee weapons until the end of the combat phase.

Fearless Bloodlust: Players do not have to take battleshock tests for Khorne units within 18″ of any Bloodsecrator with an open Portal of Skulls.”

The Rage of Khorne stacks folks, and it will stack RAW until GW makes an official statement.