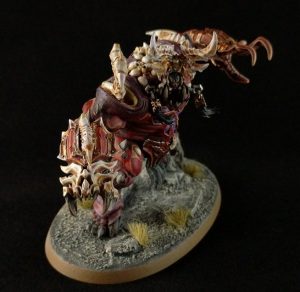 Hey everyone, Josh here to discuss the units that are available in the Blades of Khorne. This time we’ll be discussing a unit another heavy calvary unit, Khorgoraths. For more tactics articles, check out the Tactics Corner!

Khorgorath are hulking, skull devouring beasts. They were once large, normal looking predatory beasts of the chaos realm. Khorne had them rounded up and taken to the brass citadel to be mutated into living skull vacuums. They now spend their days devouring the skulls of their enemies until full and vomiting the skulls they’ve devoured onto the foot of the skull throne… awesome and gross. 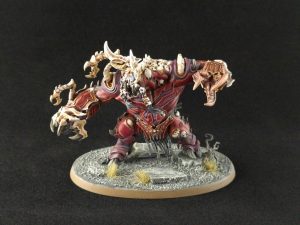 Khorgoraths are one of the most unique models in the game. These guys have a reasonable short range missile weapon. They’re monsters that can be run in a multi-model unit (weird). They’re resilient. They’re speedy. They’re melee weapons have good accuracy, rend and deal more than one damage per attack. Before Blades of Khorne, Khorgorath were pretty weak, but now they’re are awesome.

Khorgoraths are relatively fast, resilient models with hard hitting attacks. This makes them excellent for a wide variety of things. Most of the time, you’ll probably be using your Khorgoraths to intercept large groups of battleline units, and seeing as how they have 8 wounds per model and a 4+ save you can usually get away with making your first attack or second with separate units before circling back to them. Just make sure you jam them into the side of your the enemy unit so that your opponent can’t make an effective pile in. Don’t forget to heal those wounds.

The Horrific Predator ability is underappreciated. This ability is stackable. If you’re running an MCU (minimum capacity unit) style list with multiple units of Khorgoraths, you can do some serious damage to your opponent’s bravery characteristic. Roll in with your monsters and keep them within 12″ of enemy units that might suffer losses in your battleshock phase. I’ve theory crafted some interesting lists that consistently subtract 4 from your opponent’s bravery characteristic, hopefully GW gives us an easier way to purchase more Khorgoraths soon. 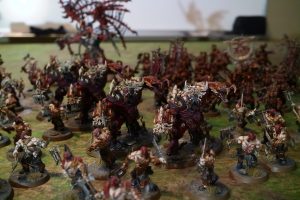 Khorgoraths aren’t as dependent on attack characteristic buffs and their melee attacks have solid accuracy. Don’t be afraid to use them outside the range of the Bloodsecrator or without buffing them. Attack characteristic buffs are cool if you’re running MCU, but if you want to buff a group of them, focus on suring up those hits or giving them wound re-rolls with Bloodstoker.

I’d be insane to talk about Khorgorath’s without talking about Skaarac the Bloodborn. This guy allows you to build a list that can easily provide your Khorgorath’s with a turn 1 charge if you play your cards right:

Double boost your save rolls and double whip your unit of five khorgis. Send them barreling across the battlefield at a run speed of 14+1d6″. Then charge your enemy with an insane movement speed of 8+2D6″. This is not a competitive list. It is easily beaten by some of the best armies out there, but the list sure sounds fun. RAAAHHHH!!!

Khorgoraths are Monsters. It’s a unique keyword for a multi-model unit, but it is bad. Monsters don’t get bonuses for being in cover. Additionally, there are also lots of units that are gain bonuses while fighting against units with the monster keyword. Make sure you’re aware of enemy units that gain bonuses while fighting monsters and avoid being the victim of alpha strikes with those units.

Khorgoraths don’t have the mortal or daemon keyword. You’re going to need to be cautious about your hero unit choices if your army has a lot of khorgoraths in it. You’ll no longer be able to gain any bonuses from the Aspiring Deathbringer or Lord of Khorne on Juggernaut. 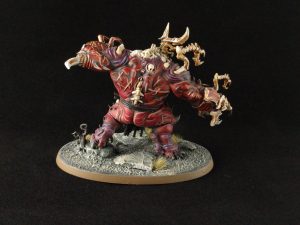 Currently there’s only one way to get a Khorgorath. It’s a cool model, but there aren’t any options for that model built into the sprue that it comes on. As far as the lore is concerned, there are any number of mutations that Khorgorath can be stricken with. I would have liked to see a little mix and match, but for now we’ll have to settle for some good ole’ fashion kit bashing. Hopefully GW releases some official options soon.